Exposing The Unknown Cruelty Behind Those "Fun" Elephant Rides

Close to half of all the elephants in the world live most of their lives in captivity. From performing dangerous tricks in circuses to being paraded around crowded city streets, an elephant's life in captivity is anything but the lives they were born to live. Some of the worst abuses elephants endure in modern times, are inflicted for the sake of the entertainment of tourists, including elephant rides. And a lot of it comes down to the lack of awareness.

Here's the truth behind those elephant rides

The tourism industry isn't without its flaws. The $7.2 trillion dollar global travel economy supports a myriad of businesses, some of which operate at the expense of the environment, local resources or both. Exploitation is a part of the world of travel, as is in the case with any multi-trillion dollar industry, and animals face some of the worst forms of abuse.

Often hidden in plain sight, animal abuse can go unnoticed unless you are aware of the reality behind the scenes. While at other times, commodification of animals is so normalised that it doesn't even register as immoral, as was the case with the infamous "Tiger Temple" in Thailand, which was forced to shut down in June after years of outcry from around the world.

Unfortunately, exploitation is not limited to the demand for selfies with drugged-out tigers. From killer whale acrobatics in SeaWorld to camel-rides in the parking lots of Gurgaon, millions of animals are subjected to a life they never signed up for. In the zoos, aquariums, circuses and stables of the world, the economics of the entertainment we derive from animals is often too complex and usually comes with a cultural baggage that absolutely cannot be ignored.

A part of our journey as travellers is to understand the impact we have on the world. A lot of us have sometimes bought into some of the more ethically questionable experiences, especially in an unknown foreign culture.

Historically, elephants have done a lot of heavy-lifting in vast parts of Asia, typically in logging and agroforestry. But even after machines have largely replaced the need for enslaving elephants, many elephants in India and Southeast are subjected to some of the worst treatment imaginable of which elephant rides are quite common.

What does it take to tame one of the largest, wildest animal to ever walk the face of the planet?

Phajaan is a technique practised throughout Asia. Wild elephants are isolated, chained, beaten, starved and viciously attacked until their "spirits" are crushed. The process lasts anywhere from weeks to months to years, until the elephant goes insane from the trauma and gives up and learns to fear the metal hooks the mahouts use to attack them.

Elephants' bodies are not meant to be ridden, not even by their mahouts. In fact, their necks are among their most delicate joints. Mahouts who actually care about their elephants, never ride them.

Often operating under a deliberately misleading guise of elephant conservation, elephant camps in Thailand continue to draw tourists who pay anywhere from $50 to $200 to ride an elephant, take pictures with them and giving them a bath. Some elephants are even trained to hold a paintbrush with their trunks and paint a picture for the entertainment of onlookers.

And then there are the environmental consequences of removing elephants from the wild because they are considered more valuable as slaves, than as part of the vast and delicate ecosystem of a forest. Elephants have literally shaped the forests they live in, as their largest residents. Without them, their habitat crumbles, resulting in an irreversible degradation of regional biodiversity.

Our willingness to coexist with exploitation of animals arises due to our willingness to objectify their entire existence, as if animals are devoid of emotions and intelligence. Elephants are complex, social beings and are one of the most intelligent of mammals to have ever lived on earth. They cry, love, sulk and get angry. They have friendships and disagreements; they discuss, argue, compromise and make decisions together. They even empathise and forgive, but famously never forget.

Just like humans, elephants have the ability to empathise, not only with their own kind, but also with other living things. Here is a video of a baby elephant trying to rescue a man who appeared to be drowning.

How can you help?

The only way to stop the enslavement of elephants is to kill the demand for activities that require their enslavement. Here's how to avoid becoming a part of the problem.

A real elephant conservation project will never let you or the mahout ride the elephants. The only safe way to interact with elephants is while feeding them under the supervision of their mahout.

Several wildlife experiences in Asia are centred around elephant-safaris, wherein tourists ride an elephant through a forest, in groups of 3-7. These safaris can be anywhere from a few hours to multiple days. But you can explore the wilderness on your own two feet. There are several alternatives, treks and wilderness tours, which don't involve contact with elephants, except chance encounters with wild herds.

Instead of riding elephants, considering volunteering at a real conservation centre that rescues elephants from elephant camps. Elephant Nature Park in Chiang Mai, one of the most acclaimed elephant conservation projects in the world is one of the options. They rescue captive elephants and treat them with the love and affection they need after the years of trauma they have endured. The following video is about the woman who started the sanctuary, where she talks about the lives of captive elephants in Thailand.

There are a few other rehabilitation projects in Asia that prioritise the well being of animals over the entertainment of tourists. Boon Lott’s Elephant Sanctuary and Patara in Chiang Mai and the Elephant Valley Park in Cambodia are all reputable sanctuaries open to visitors and volunteers.

Elephants in the wild

Read "The Elephant Trail at Corbett National Park" by Aparajita

A beautiful herd of elephants in their natural habitat. (credit: curiouslog, edited from original) 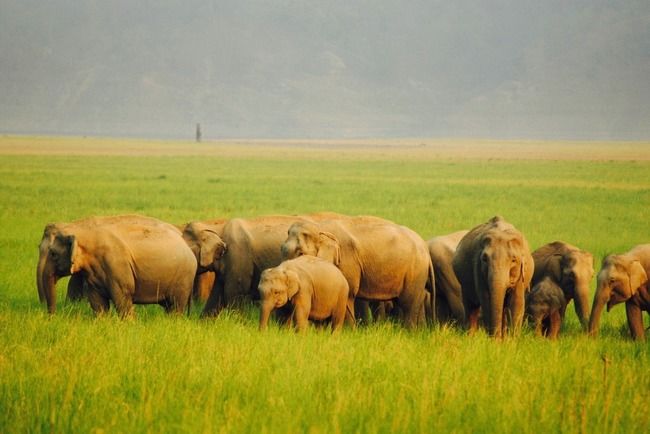 What are your thoughts about these practises that are behind most elephant rides? Please share your opinions and comments below.