Euphony of the soft waves tugging at the heart strings. The saffron flags on the crest of the temples, ecstatic and elated, adding color to the light blue sky. The mighty sun pouring its luminance into the holy Ganges. Swarms of vivacious crowd adding life to the city. The narrow lanes with vibrant shops aligned at both sides. Chaotic yet enchanting.

Transports you to a different world altogether.

Around 2:00 in the afternoon we bid goodbye to Delhi, our starting point. After a day’s stay at Kanpur, we headed towards Varanasi around afternoon. In the evening, we reached Allahbad and luckily happened to witness the Ganga aarti at the Triveni sangam. The river’s horizon was lit up with an array of lights, and the songs of devotion echoed in the surroundings.

Around 10:00pm, we finally reached Varanasi, the spiritual capital of India.

Named after the confluence of two rivers, Varuna and Assi, Varanasi houses a staggering 23,000 temples and over a 100 ghats.

The city boasts of being the oldest continually inhabited city as the settlements around it began as early as 11th or 12th B.C.E.

Next day, we were all set to visit the Famous Kashi Vishwanath Temple. Rebuilt several times in the past 800 years, this temple is one of the holiest places of the hindus. (One thing to keep in mind is that mobile phones and cameras are strictly prohibited in the temple premises.)

Walking through the serpentine lanes, with our steps leading us towards the temple, we realized that the real beauty of Varanasi lies in its narrow lanes choc-a-block with people from all walks of life. Plenty of shops are seen selling colourful flowers, bel patra(offering of which is believed to please lord shiva), gemstones, shivalingas, rudraksha, etc.

Many temples were spotted as we crossed the path.

I sat at one corner, and my eyes clicked a picture of the majestic temple, which is still embedded in my heart. The highly intricate architecture, the gold plated dome reflecting a sheen , the gong of the huge bells , the shivalinga adorned with belpatras and flowers of all hues , the devotees chanting “Har Har Mahadev”!

The feeling of being present there and gazing at its eternal beauty, is a moment I will cherish all my life.

Also known as the Golden temple, the Vishwanath Temple is one of the twelve jyotirlingas, and the prime one.

Legend says that this is the place where the war of words between Brahma (the creator) and Vishnu (the preserver) happened in order to prove their respective supremacy.To test them, Lord Shiva (the destroyer) pierced the three worlds by a huge endless pillar of light, the jyotirlinga. In the search of the beginning and the end of the linga, Brahma lied, and thus was cursed by Lord Shiva that he won’t be worshipped in temples.

From here we visited the Sankat Mochan temple, which is dedicated to Lord Hanuman.It is believed that this is the place where Tulsidas had a vision of Lord Hanuman. The temple was so lively and vibrant, with bhajans reverberating all around! Just nearby, are the temples namely Durga mandir and Tulsi Manas mandir.

From there, we visited the Ramnnagar fort. Situated near river Ganges, it was built by Kashi Naresh Raja Balwant Singh in 1750. It contains the weapons, cars, horse carriages, royal attire, palequins, cannons, musical instruments and a Vyasa temple belonging to that era. It offers a panoramic view of the river and beyond, and is influenced by Mughal style architecture.

The sun was about to set, and the darker shade of the sky was overpowering the lighter one.

We went to witness the grandeur of the Ganga aarti, which is held daily at 6:30pm at the Dashashwamedh ghat.

Truly. A sight to behold.

For a detailed explanation about the proceedings of the aarti, visit my blog at- The resplendent aarti on the banks of the Holy Ganges

The priests, with their souls seeped in devotion, gracefully worshipped the river with the lighted lamps. Thousands of people congregated here to watch the beautiful aarti, and then afterwards, released diyas into the river’s surface.

For those hearts that are craving for their next adventure, its time to lose yourself in the destination older than history. 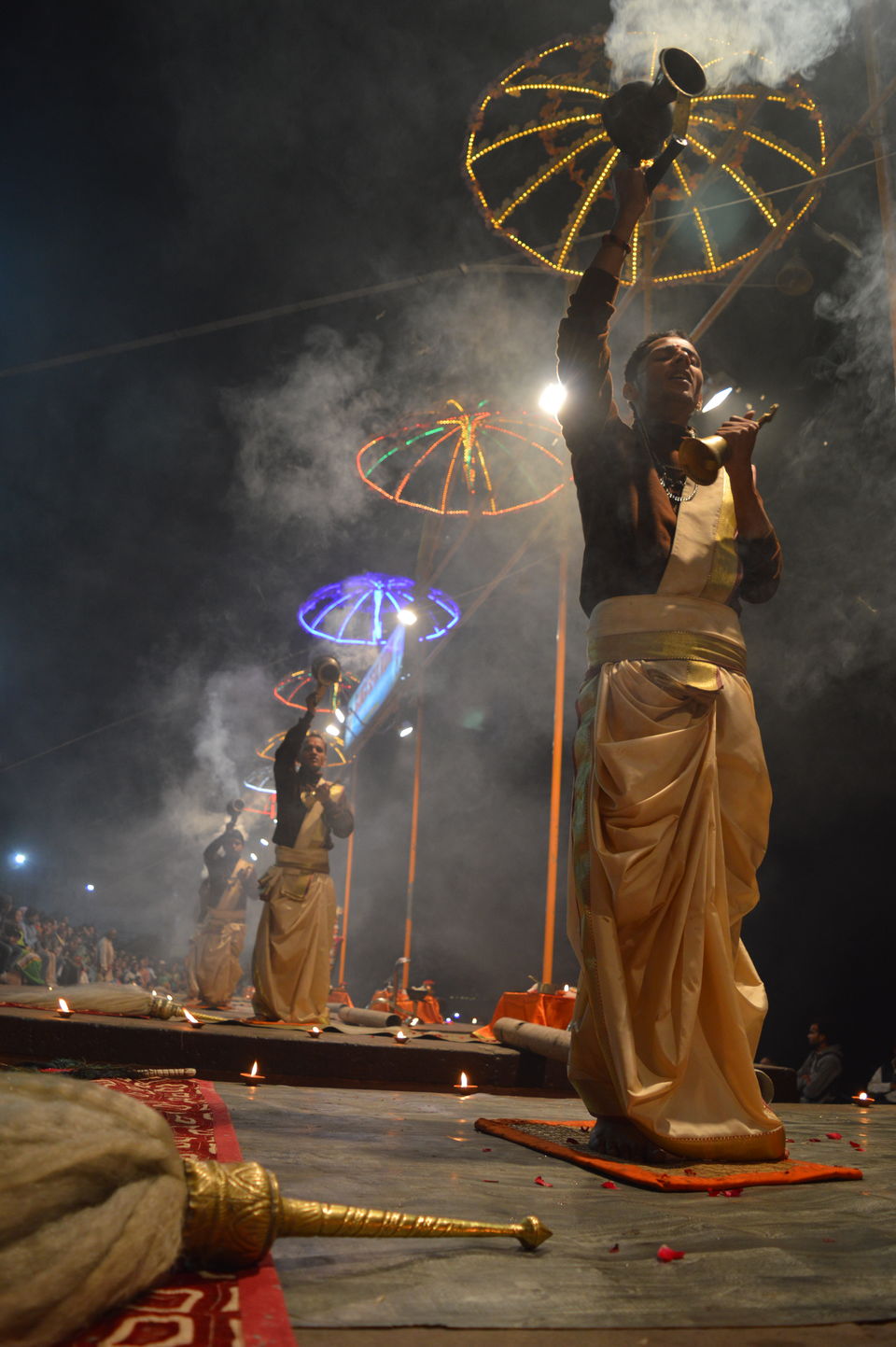 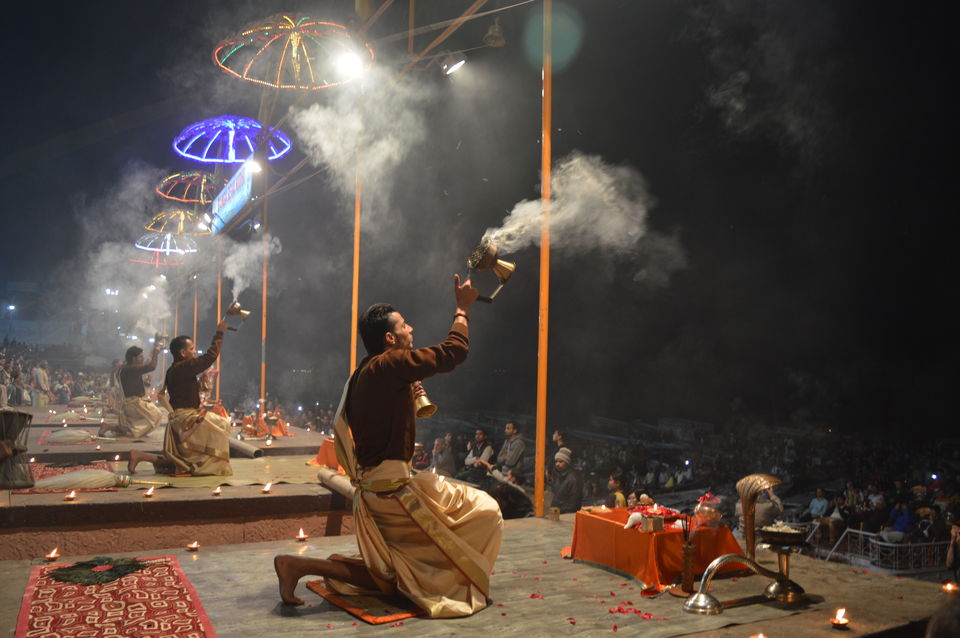 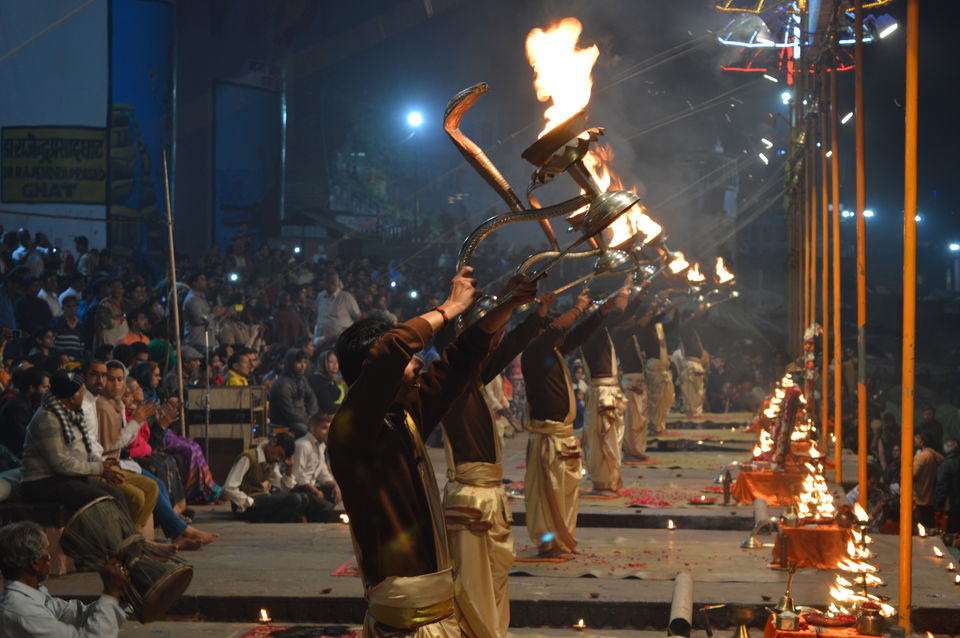 Ramnagar is famous for 250 years old Ramlila. It houses the popular Ramnagar Fort swarmed by the history buffs who wish to relive into the past. 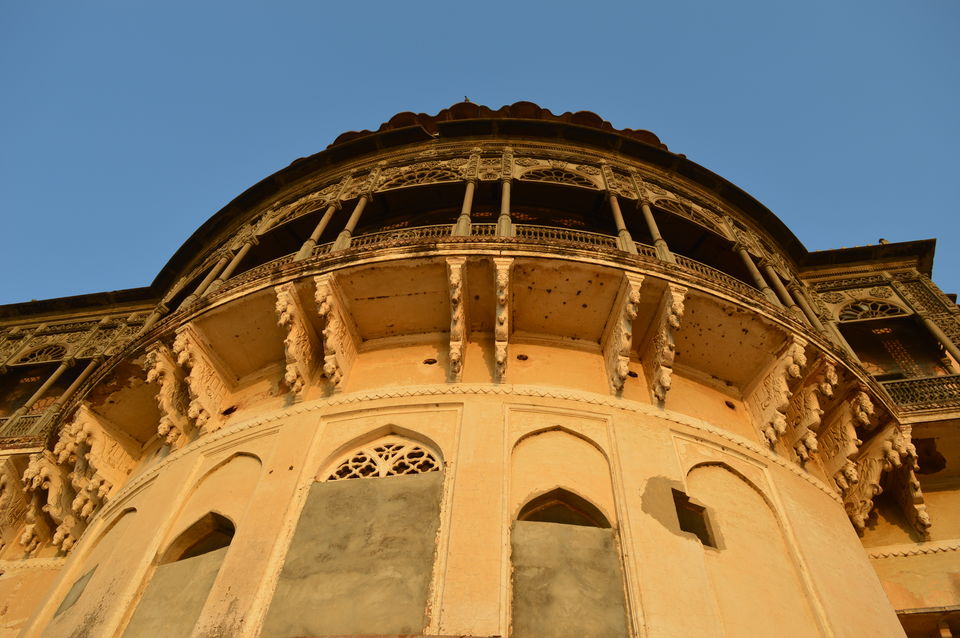 The panoramic view of the Holy Ganges 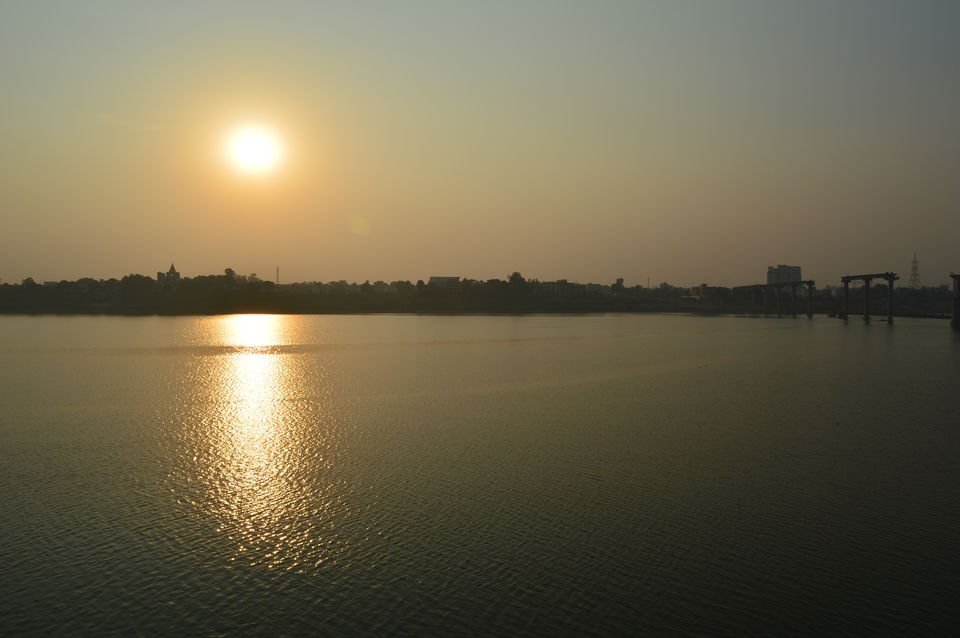 The place of the confluence of three rivers, Ganga, Yamuna, Saraswati at the Triveni Sangam.

Our starting point. Varanasi is about 816 km from here.