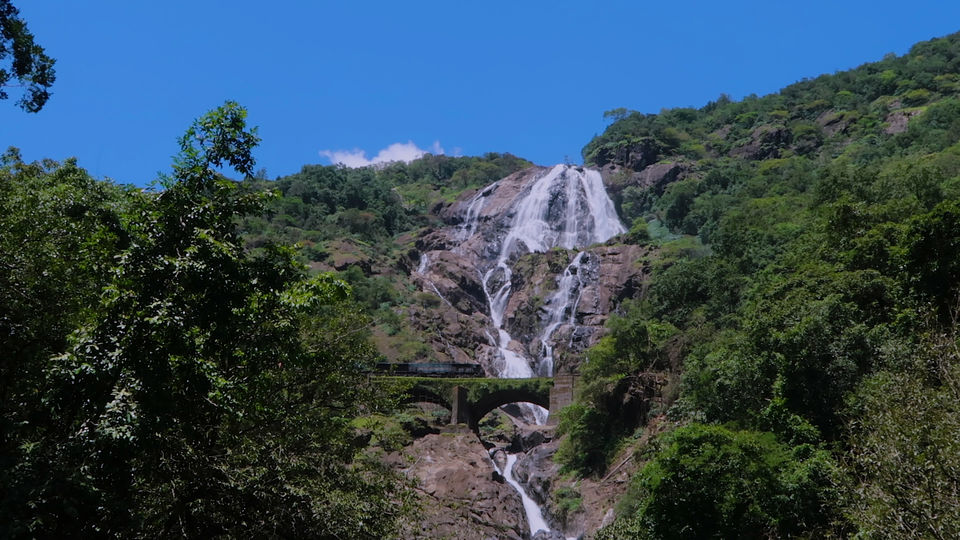 Dudhsagar, literally translated as the sea of milk, is a four-tiered waterfall located deep inside the Bhagwan Mahavir Wildlife Sanctuary. Out of a few wildlife sanctuaries in Goa, it is the perhaps the most-visited, thanks to the amazing Dudhsagar Waterfalls here.

I have been to Goa as many as five times, if not less, and been to the falls twice. However, I decided to make this time different and a tad bit adventurous.

How to reach the falls?

It is a tricky business reaching the falls, especially during monsoons when its most popular road-way, is closed.

There are basically three ways to reach the falls.

The most common and most-favored by tourists is the Jeep Safari. From the base of the falls, run a number of jeeps that take you to a spot near the falls from where it is an easy walk of about ten minutes. The jeeps run from mid-October till the beginning of monsoons and cost Rs. 400/- (USD 6) per person. Another catch is that the jeeps are almost full during the season. Tickets counter are filled to the brim which makes it difficult to reserve the ride. People usually line up since early morning for reservations.

The other is via the Castle Rock Railway Station in Karnataka, to the second-tier of the falls. The train halts at the exact spot for less than two minutes giving only so much time to the trekkers to alight. However, this trek is not only terribly risky but also a punishable offense under several sections of the Indian Railways Act. [ See here]Now who would want to make their trekking experience that " adventurous"!

That brings me to the third more adventurous and less risky way to reach the Dudhsagar Waterfalls even in monsoons.

The entire trek is taken through a thick forest of tropical evergreen vegetation, beautiful streams, and peculiar animals.

About three hours later, I finally reached the majestic Dudhsagar Waterfalls gushing down the four-tiers in its full froth.

The entire trek took about six hours to complete and I left with a lot of memories that'd linger on.

The trek to Dudhsagar falls was guided and arranged by my accommodation. I paid INR 3500/- (USD 50) for the trek alone which was quite a lot. But since I was travelling alone, I thought it better to go with a known-guided trek. One can easily find guides at the ticket-counter of Dudhsagar Waterfalls who would charge far less than the price I mentioned above. You can make your choice! I found Natures Nest Resort a wonderful place to stay at. It is a bit far from the Dudhsagar Falls but the accommodation arranges for everything. The other, much nearer, is the Jungle Book Resort right next to the entrance of the sanctuary. However, I opted out of it once I became aware of their cruelty towards animals. The essentials to carry for the trek would involve:- A sun-protect, Sun-glasses, Rain-cover for your bag, Chocolates (vegan-friendly for me) and Lots of water. I stopped at the only house inside the sanctuary, where I was served lunch - traditional Goan delicacies. Despite that, the chocolates came in handy. Apart from the above, a good mosquito-repellent will save you a great deal throughout your trek.

Last but not the least, I found the experience safe for solo female travellers.