This year I decided to beak my ‘no international trip’ rule. Well hell broke loose as I had to make all the bookings in 15 days if I wanted to travel on my birthday. That meant that I could not travel anywhere that required prior Visa. That in turn meant that I had very limited options. I was also on a tight budget.

In an impulsive moment I bought flight tickets to Maldives and also purchased a return ticket ensuring that my stay was for four nights and four days. And once the tickets were booked, I realized that I had made a deep mess. My narrative will tell you what happened to me while planning for the trip and on the trip.

No sooner had I booked the flights, that I realized

• The information of ferries online was haphazard

• I was to fly back early morning. So early that the ferries don’t start running for the by that time!

• Not only had I booked an early morning flight, I had also booked it for a Saturday. A lot of islands are not connected by ferries on Fridays. That means I would have to choose my island correctly or not believe the information on ferries available on the internet.

• This meant that I could not make prior bookings with hotels

I decided to take a plunge! I left for Maldives without any kind of prior bookings. And the following ensued

• I was able to argue that SpiceJet had no right to stop me but I had to give an undertaking stating that if I was sent back SpiceJet would not pay any kind of penalty. Absurd right!

• The food on the connecting flight was over

• The information desk at the airport could not help at all with ferry schedule or internal flight schedule.

• The airport was teeming with agents who were selling packages at exorbitant prices. 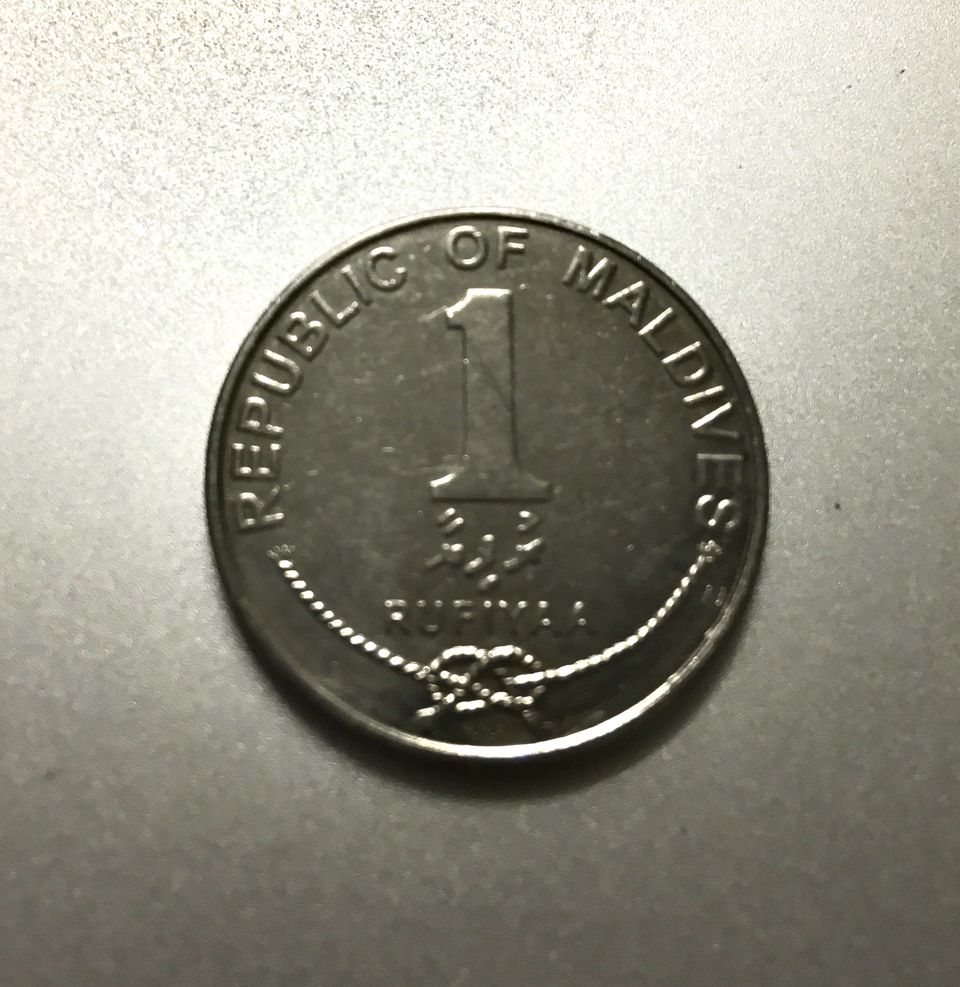 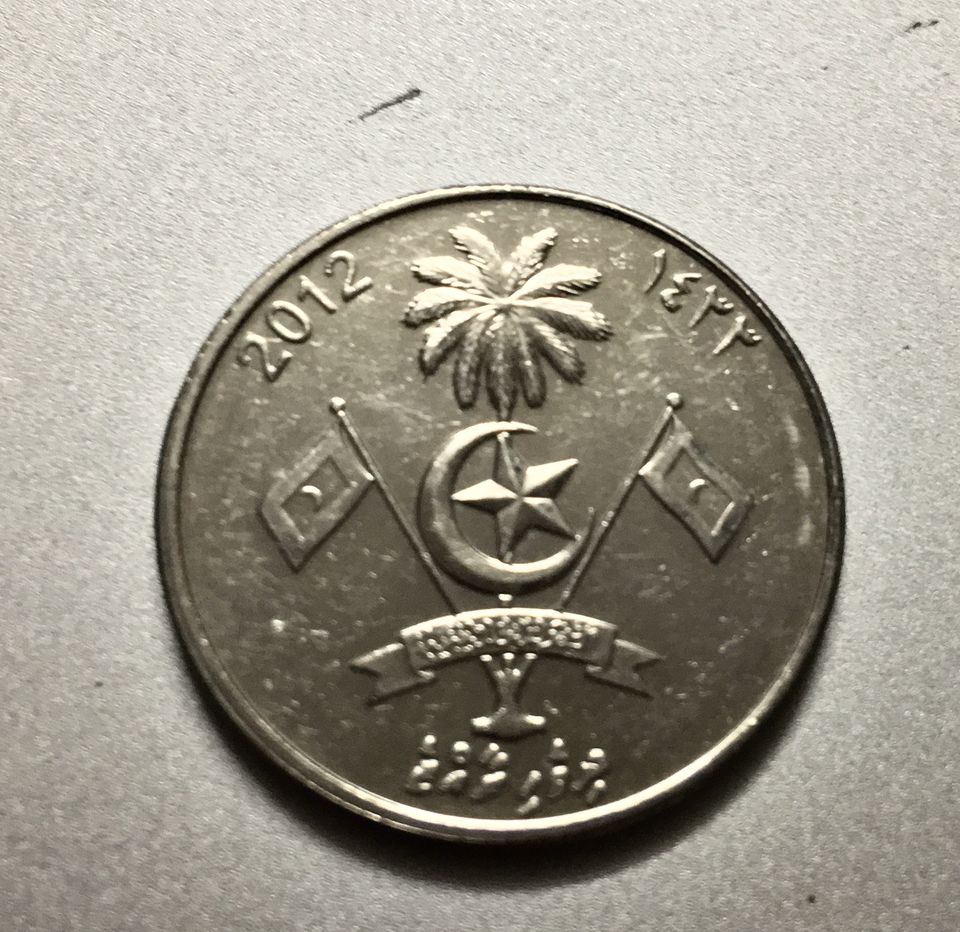 I was able to get some help and was told to take a ferry to Male where I would decide what to do next. The jetty and the view from it were extremely stunning. I was able to enjoy the blue waters and reminisce flying over the beautiful islands and the aerial view of the water villas. I decided to take a ferry to a local island and not a resort island. The island I picked had ferries running between it and Hulumale (airport island) every day.

From this point I began to thoroughly enjoy my trip even though the speedboat ride was a little choppy and made me queasy. The island was 500m by 600m and was beautiful with the jetty lined by yachts and a singular bench (where I would spend a lot of time over the next 2 days), several resorts, 1 restaurant, dive centers, souvenir shops, school, a hospital, a playground, a bikini beach (it is a beach where you are allowed to wear swimwear. This was a local island which means local laws were applicable. No alcohol, no skin show etc.) and more. I was able to familiarize myself with the island in less than 1 hour. That’s how tiny it was. There were no vehicles on the island! Only 2 wheelers… so clam and clean. It was pristine. The whole island was practically a beach. 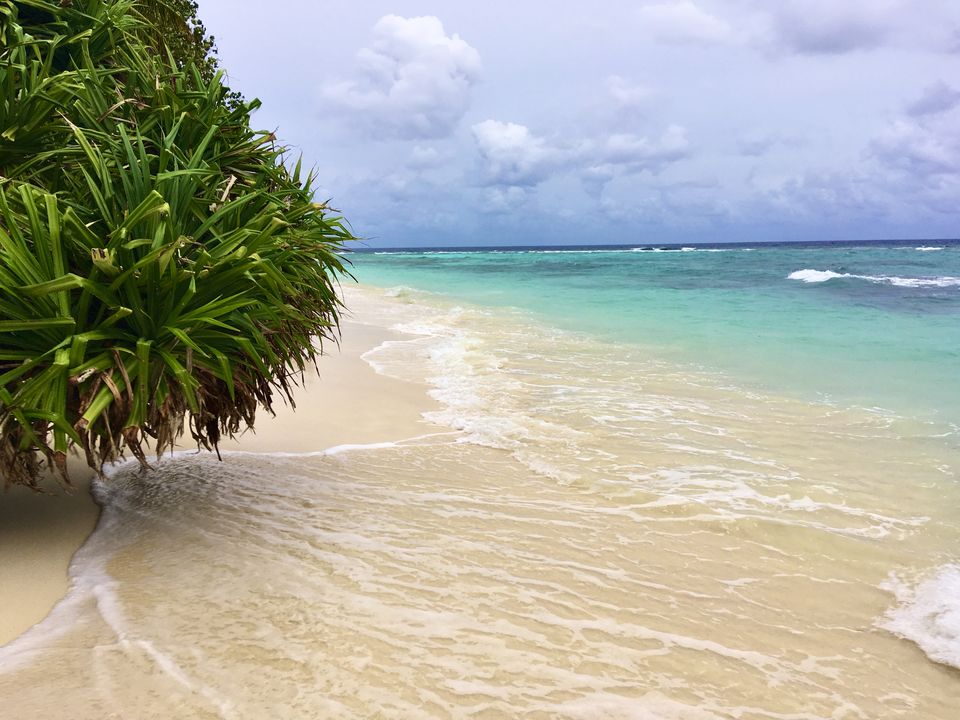 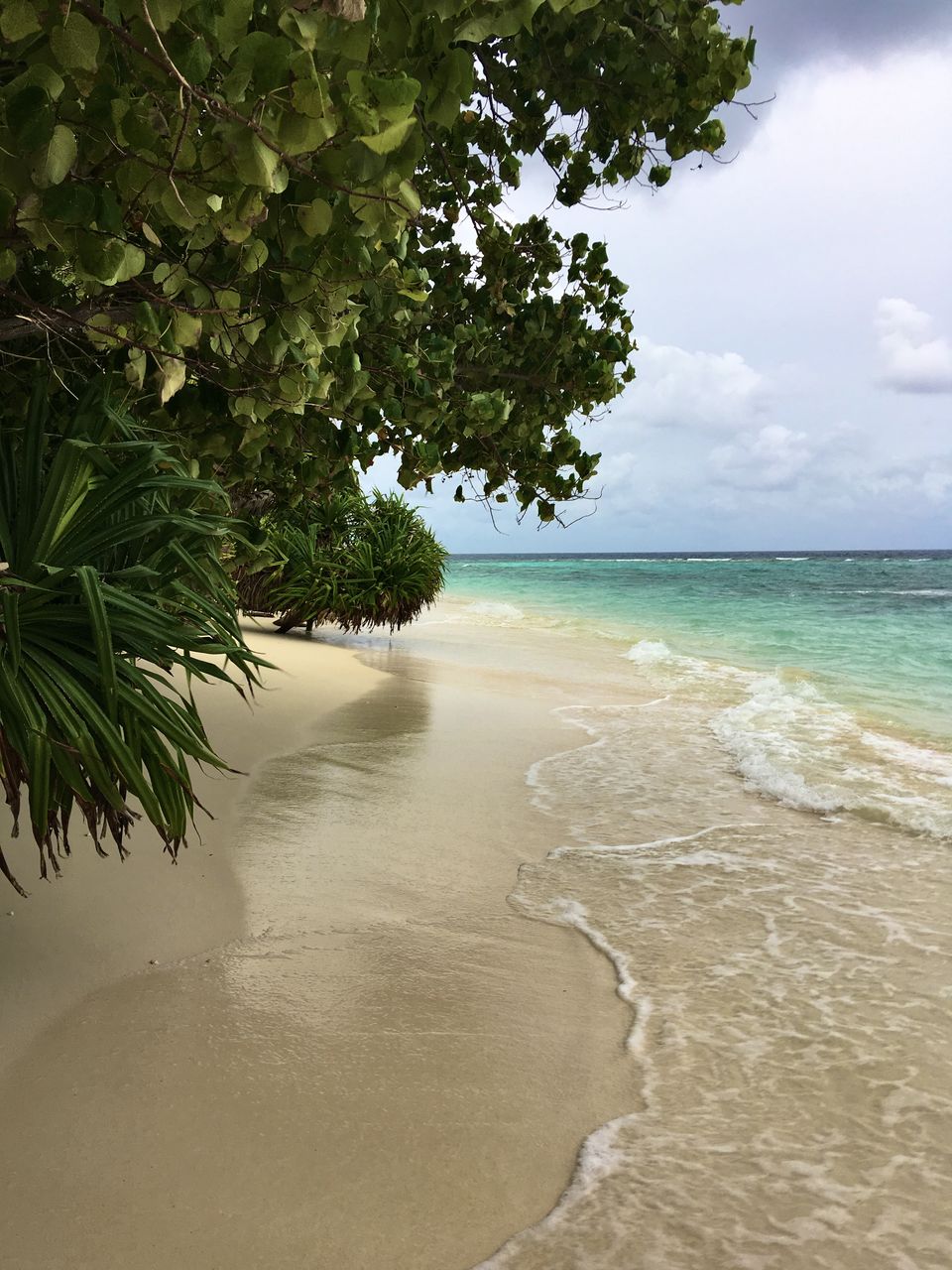 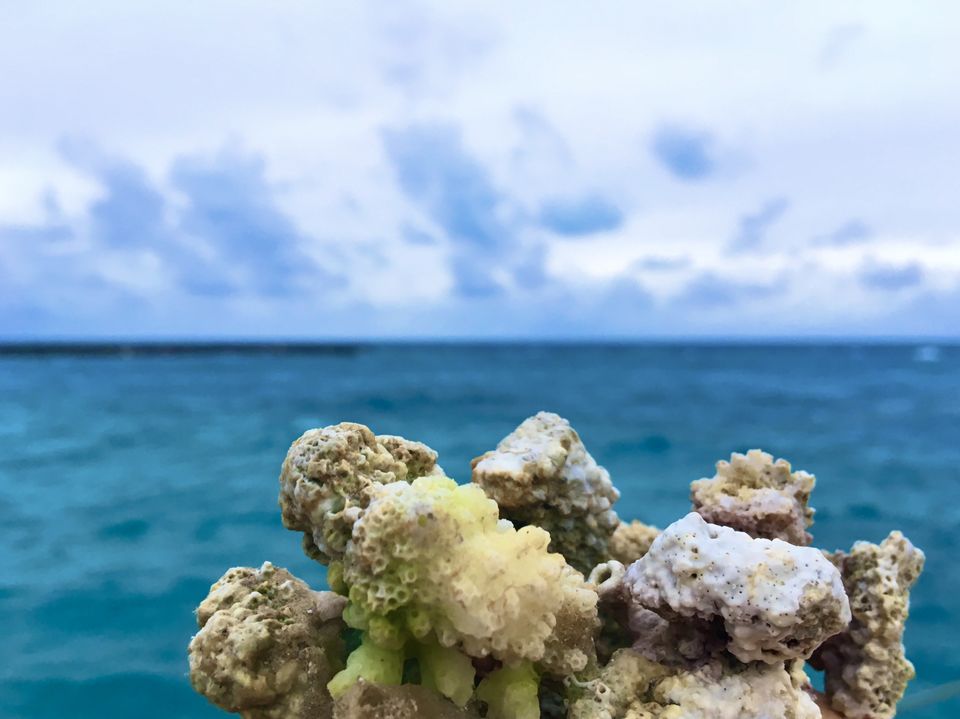 The food and stay were much more than I had hoped for with my room having a bathtub and food including fruits and juices all the time. But what had caught my attention was the dive centers. This island had amazing reefs and a sandbank with a pool (not a swimming pool but a deep pocket in an otherwise flat sea bed) which teems with marine life. I immediately signed up for several snorkeling sessions, visit to the sand bank and also experiential diving. I was still hoping to see Mantas.

And guess what! Not only did I see mantas, I was also able to see sharks – whale shark and several reef sharks. And no, they did not bite me and it is completely safe to be around them. We saw turtles different colored corals and 100s of different types of reef fish. Words cannot describe what you see down there. 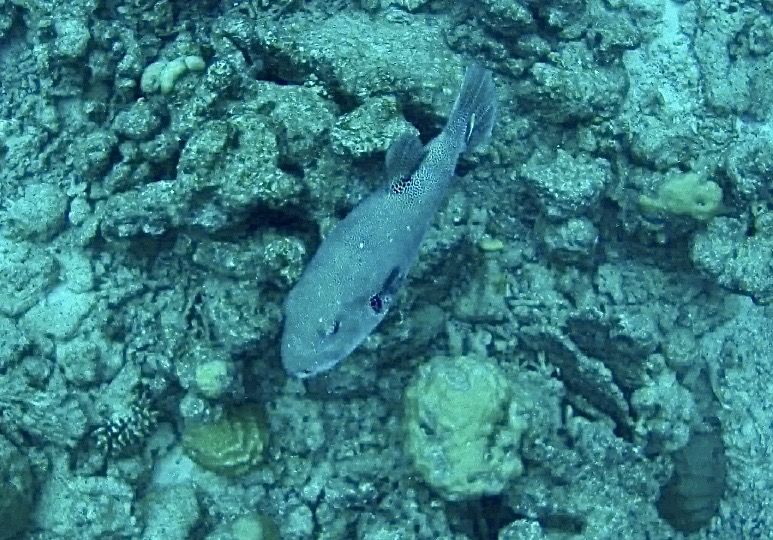 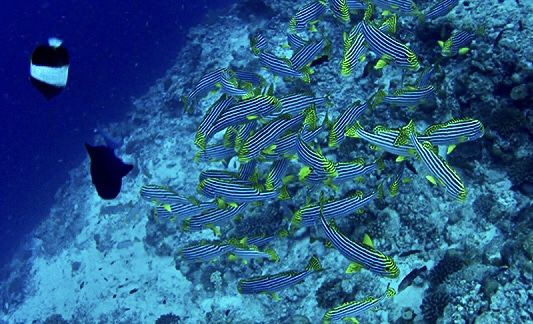 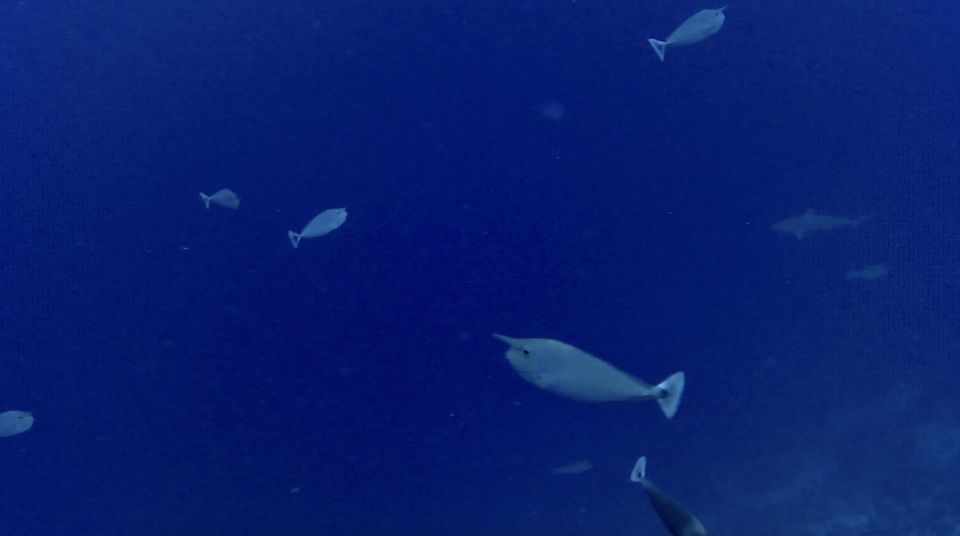 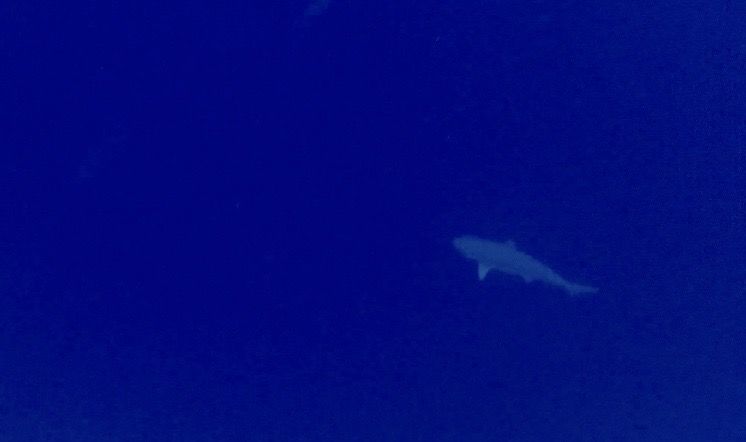 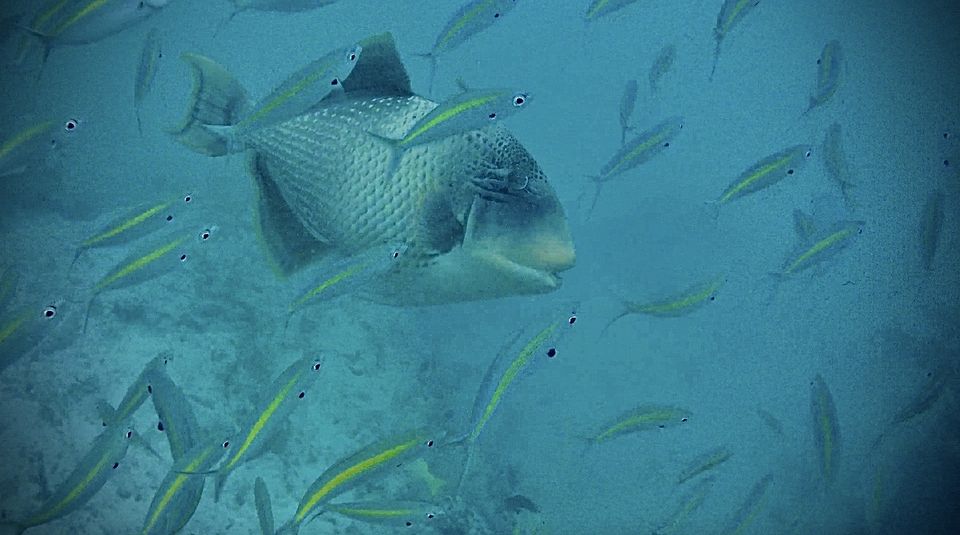 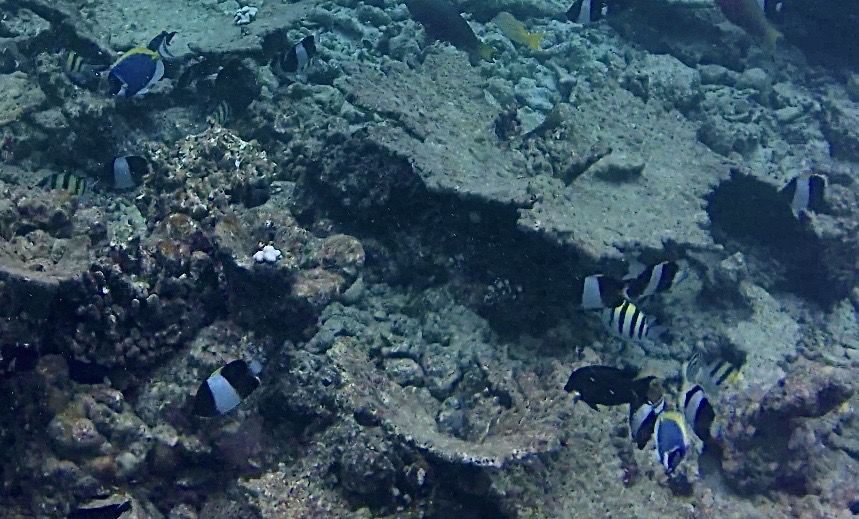 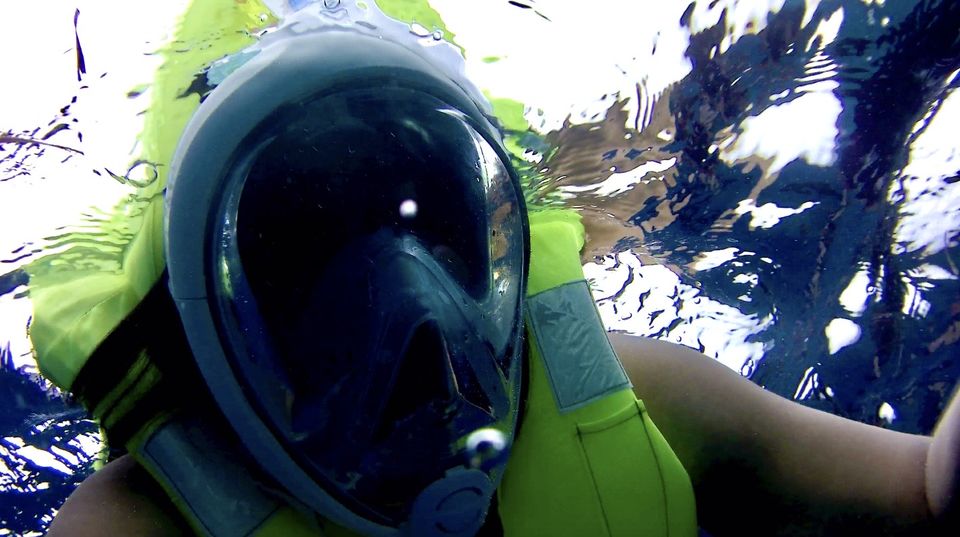 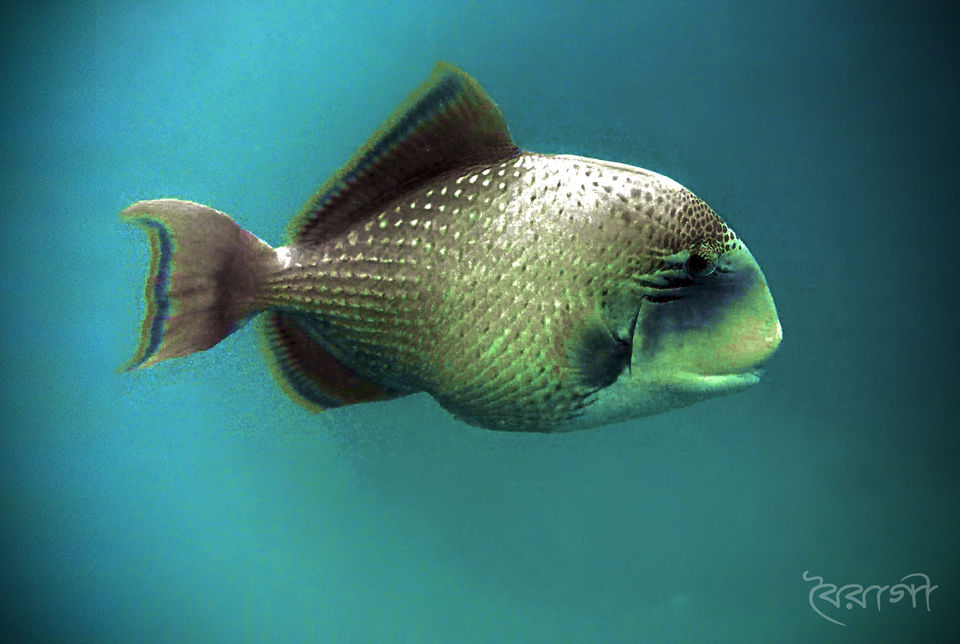 The sandbank was an amazing experience. Imagine a strip of land 1m wide and 15m in length, surrounded with blue waters. The kite surfers actually jump across the width easily.

After being infatuated by this island, I decided to island hop. Alas! A storm brew up and now only did I have to cancel my dive, but also my ferry to take me to the next island could not reach me. I spent the day dancing in the rain on the island. Exploring its beauty, enjoying the crashing waves. I was able to send out postcards to my friends from the little post office and buy souvenirs. 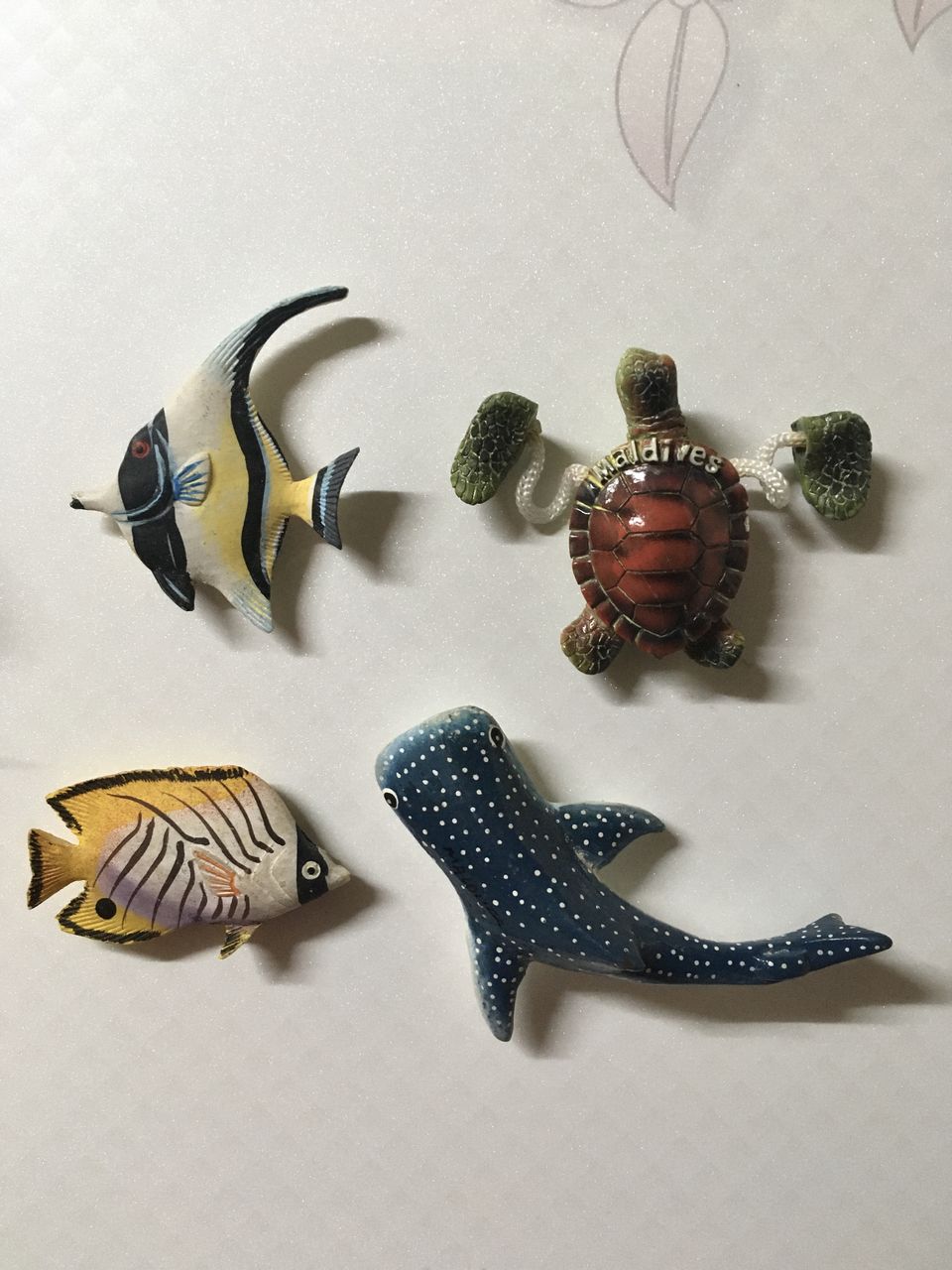 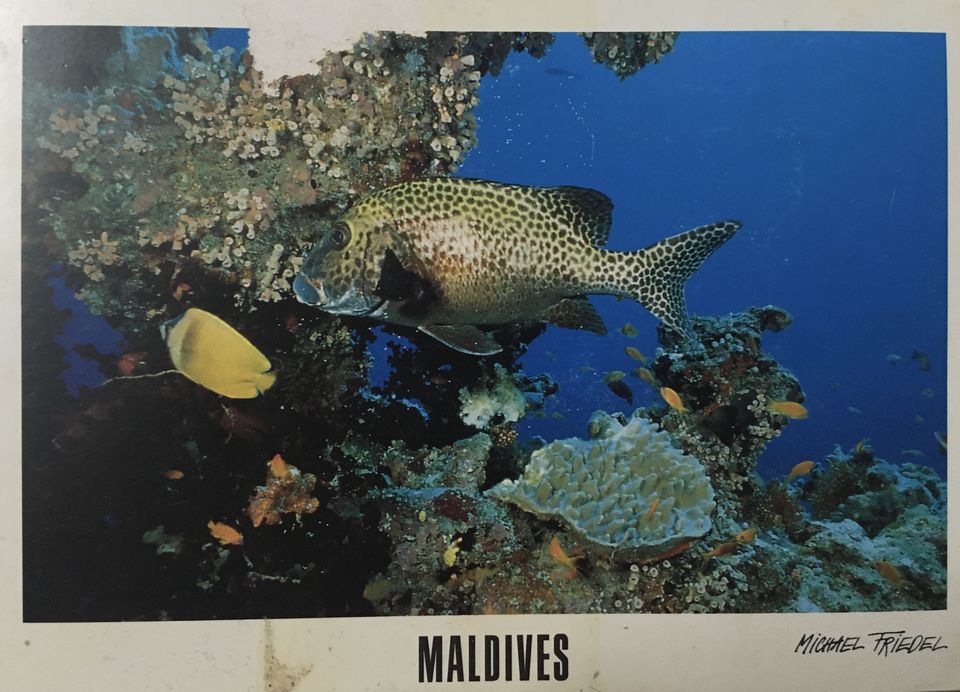 On the third day, I was able to go back to Hulumale. From there I would be able to take a flight to Mumbai the next morning. There was a bus that picked us up from the jetty that took me to a place where there are several hotels. I took up a decent one.

Hulumale also turned out to a small island. I walked around from one shore to the other (one being a jetty the other being a beach). I explored the markets, malls, shops, open gym and cafes on the beach. I took a dip in the clam pool before letting the sun set on me. I had dinner by the sea and let it sink in that I would have to leave all this behind the next day. 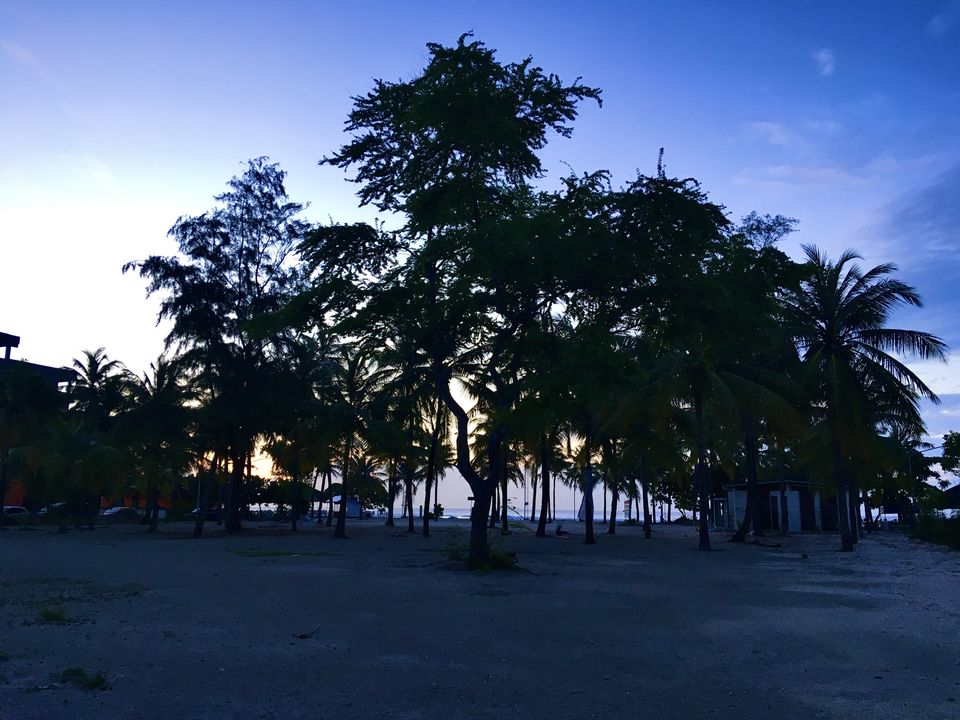 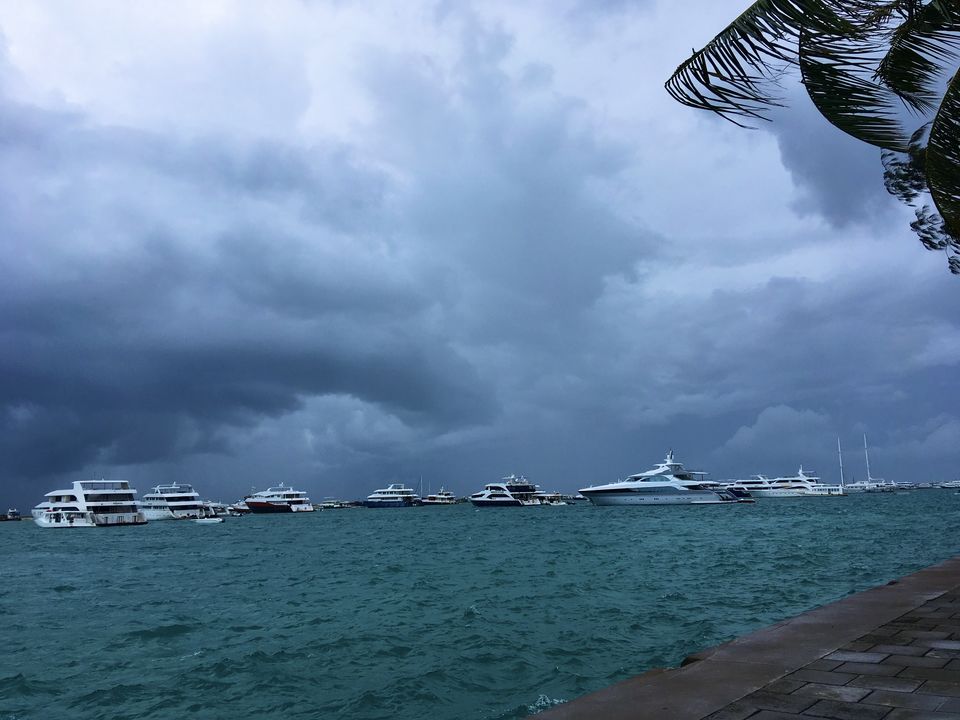 I took a bus to the airport. Yes! Buses are available as early as 5:00 AM and headed home back with the most wonderous experience of my life. What a bounty of experiences! The marine fauna made such a special place in my heart that I now avidly research diving sites, made a list of best diving expeditions that I want to undertake, budget diving, underwater photography and marine biology.

I have decided to share my experience and expertise to help fellow travelers to undertake without burning holes in the pocket and minus the struggles that I have had.