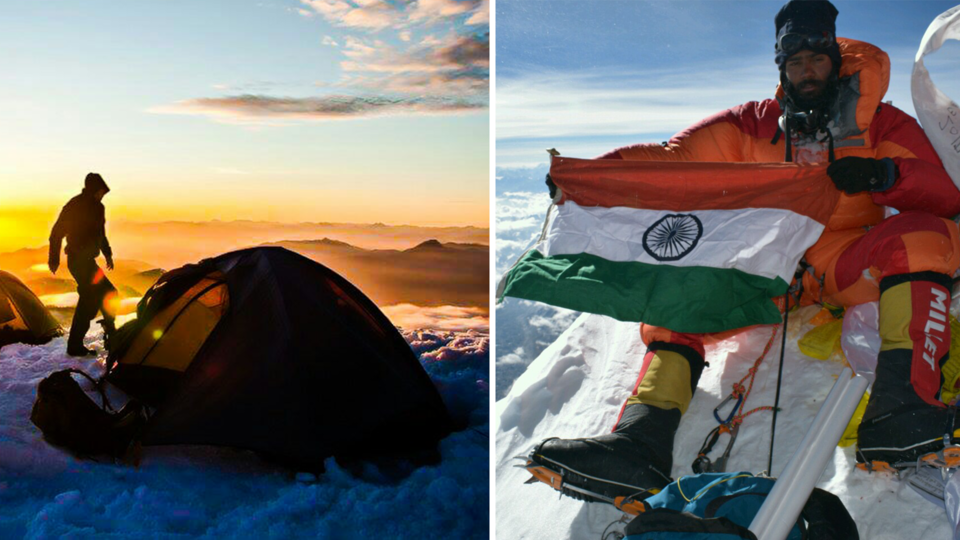 At an age when most of us are still figuring out what to with our lives, he was sitting on Mount Everest with the Indian tricolour in his hand. In the process, he became the youngest Indian to scale the peak from China ridge. Being the adventure hungry soul that he his, he then went on to spend 22 hours in a tent on top of Mount Kilimanjaro, Africa's highest mountain peak. He believes in doing things in his own style and is all for living on the edge. Hailing from Indore, Madhusudan Patidar, is unlike any other small town boy you would have ever come across. Much like the character from which he gets his nick name Mowgli, Madhusudan is as humble a person as he is crazy when it comes to adventure.

Apart from scaling these dangerous peaks, Madhusudan has also successfully climbed(and I mean climbed, not trekked) Mt. Koa Rang 2, Mt. Koa Rang 3, Mt. Stok Kangri and completed an 850km cycling expedition from Bengaluru to Goa in just 52 hours! I had the pleasure of speaking to this daredevil over the phone. Here are some excerpts from the same:

My mother would panic when I would ask her to let me go on school trips. How did your parents react when you told them that you want to climb mountains for a living?

All mothers are the same, I guess! My mother had no idea that I was going on an Everest expedition. My father and my sister knew about my mountaineering all along and they really helped me at every step, particularly for the Everest climb. As for my mother, I just told her that I was going to Nepal for a couple of months. It was only after that I had scaled Everest that the media started pouring in and that's when she realised what had happened!

How exactly did Everest happen to you?

Scaling Everest was nothing less than an obsession for me ever since I started mountaineering. So basically, everything that I was doing in life, in some way or the other was leading up to Everest. I built up my base by gaining formal training before moving on to climbing smaller peaks in India. Since Everest was my first major climb, I obviously had no sponsors. I had to convince my family to back me financially but once that was sorted, it was all about living a dream.

You had a little incident up there as well. Tell us something about that.

So all of the area on Everest that lies above 8000m is called the 'dead zone'. While we were climbing through the dead zone one day, the weather gods suddenly decided to test us. I was hanging on a ladder when out of nowhere, strong winds started blowing. When you're on such high altitude, you have to keep your fingers moving every five minutes to ensure there's proper blood flow. Now since I was hanging there for about an hour and a half, I couldn't really move my fingers. Soon I discovered that one of my fingers had fallen prey to frostbite and I knew that there was no way out now. A month later, I returned to my hometown and got an operation done to do away with the frozen finger.

Yet, you're planning to scale Everest again. Why?

Yes, I'm planning to climb Everest for the second time in 2019. While my first climb was from China, this time I'm going through Nepal. The Nepal route is considered to be relatively easier than the China route—right from permissions to expenses to the climb itself, everything is more climber-friendly if you go via Nepal. Since I've already done the tough part and the thirst for Everest is yet to go away, might as well do a 2.0. And this time, my mom knows all about it!

I'm sure mental health is as important as physical fitness in mountaineering. What is the biggest challenge you face on a personal level?

Actually mental health is more important than anything else! There is a common saying in our community that mountaineering is 70% mental, 20% physical and 10% luck. And no matter how great a mountaineer is, he/she will always face one challenge or the other during climbs. As for me, I just cannot sleep while I'm on a climb. While climbing Everest, I hardly slept in the 38 days I was there.

You pitched in a tent on Mount Kilimanjaro and camped there for 22 hours. What were you thinking?

My basic mantra is that every climb that I do, I add my own unique touch to it. I've realised that this is probably the best way to spread awareness about mountaineering in India. In Kilimanjaro's case, my plan was to spend a week there! My fellow team members had already given up on me so I was the only one camping there on the peak. Sadly, the weather conditions got so bad that I had to descend after about 22 hours.

Despite the heroics, how difficult is it for a mountaineer to survive in India?

Very difficult. If a cricketer hits a six off the last ball, he turns into a celebrity overnight. On the other hand, Indian mountaineers are doing the nation proud every single day and yet there is no recognition. It is only a selected part of the media that goes out of their way to appreciate us. As for support from the government, there is still a long way to go.

To add to that, you come from Indore, a place that has nothing to do with mountaineering. How has that affected your journey?

Well, it is much easier for people from North and North-eastern India to take to mountaineering. The geographical proximity plus natural body structure gives them a big advantage. On the other hand, if you come from a place like Delhi or Mumbai, it is easier for you to get sponsors. On the flip side, the very fact that I come from a small town gets me extra love and sympathy!

Do you still travel outside of mountaineering?

Rarely. If I'm travelling with my friends, for example, I will always try and add a dash of adventure to those trips as well. Now that you've pointed it out, I think it will actually be very difficult for me to travel to a place where there is no adrenaline rush.

Have you accepted mountaineering as your ultimate career?

I am actually an engineer by profession but I don't see myself falling back to it despite of everything that I have faced and continue to. Contrary to how it is in other countries, India still doesn't recognise mountaineering as an extreme sport, let alone career choice. We are usually looked down upon and there is hardly any respect in what we do. To add to that, there is always a big initial investment that one has to put from their end if he/she plans to start out as a mountaineer. Since there is nothing that I love and enjoy more than the feeling of enjoying the view from the top, I will continue doing this, no matter how hard the journey gets.

Government aside, what is the bond like amongst fellow mountaineers in India?

Sadly, there isn't any! Most of us don't even know each other—we've just heard of each other but that's about it. Had there been a community of sorts, it would have been really beneficial for all of us. Not only would we have a platform to share our experiences with one another, it would have also pushed the government to recognise what we do and probably support us in our endeavours.

What's next for you on the professional front?

I'm really looking to push myself this time around and have set my eyes on completing the Explorers Grand Slam. This involves conquering the highest peaks in each of the seven continents and also surviving in both North and South poles. Only 43 people have successfully completed the Grand Slam and if I manage to become the 44th, I will be the youngest person to do so and the only one from India.

One final word of advice for all the young, budding mountaineers out there.

Well, I personally believe that creativity is the key. Since India isn't a mountaineer-friendly country, do things that make you stand out and bring right into the limelight. Go off to remote places, climb virgin mountains and do things that others are not doing. And finally, no matter what you do, the road will be tough—don't lose hope, keep up with the positivity, hang on and all good will come to you soon!

Know of any other unsung heroes who motivate you to travel and push the boundaries? Write in here and share their stories with the Tripoto Community. Don't forget to check out our amazing YouTube channel for handpicked travel videos from around the world.