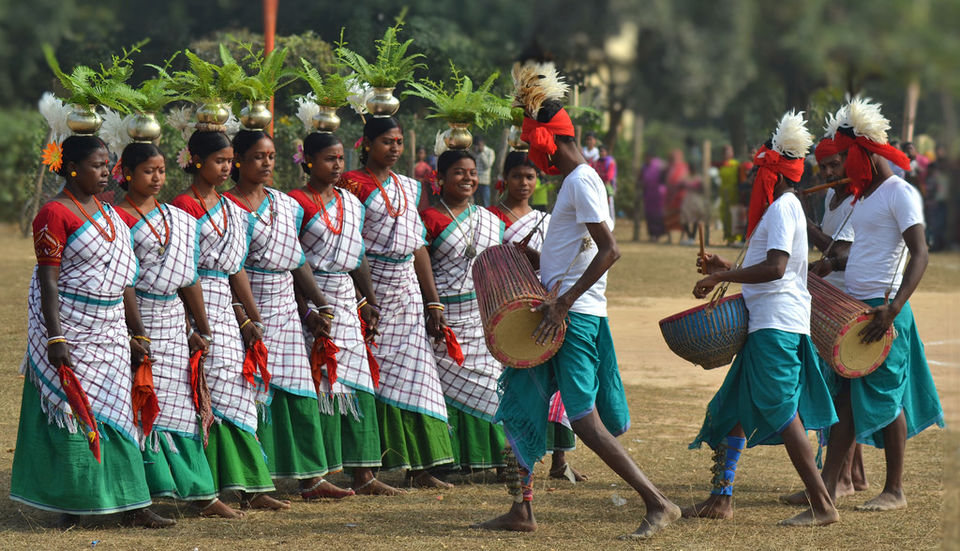 The Jangalmahal consists of Jhargram area which is a part of the Chota Nagpur Plateau region beyond the Gangetic plains close to the western borders of West Bengal.

With the hill ranges of Belpahari, Kankrajhor in the North to the serene beauties of meandering Subarnarekha River in the South, the place offers unadulterated nature with bountiful forests of Sal, Mahua, wild elephants, deer and many rare birds.

Aromatic Mahua flowers fill the air during summers. Nature draws a colorful picture with its flower laden green trees and red soil on a full-moon night. The monsoon makes the forests mystique with the woody fragrance of the Shaal trees.

The region around Jhargram is the home to Santhal and Munda tribes of Bengal who boasts about its prolific contribution towards the Indian Independence.

The ancient temples, royal palaces, tribal huts, folk tunes and rhythms of tribal adds to the unique beauty of the place.

The Jhargram Raj Palace is an impressive Gothic structure, set in vastly laid lawns and the current residence of Malla Deb Royal family. About 20 of the rooms in the ground floor have been converted into a Heritage Hotel in collaboration with West Bengal Tourism.

The majestic Raj Palace of Chilkigarh is about 12kms away from Jhargram town and surrounded by 375 different species of unique plants used for botany research.

The Eco-Tourism Center & Tribal Museum is a beautiful forest retreat with 3 cottages and 6 rooms and also houses a tribal museum displaying the indigenous tribal culture of the district. Tribal folk performances on weekends is the main attraction here.

Kendua on the way to Chilkigarh is famous for its migratory birds who gives the signal of the upcoming monsoon.

Medicinal Plant Garden of Kalaboni and Savithri Temple are also visited by tourists.

The tranquility of Gurrasini village with the Tarafeni flowing down from the peaks will mesmerize you.

10kms from Belpahari, lies the picturesque village of Khandarani which attract a major number of migratory birds every winter with its dense green forest covers and a man-made reserviors. The region is populated by Munda tribes who have been known to maintain the its old tradition and culture till date.

From Lalbasha near Belpahari, if you go 3 kms you will cross the enchanting roads shaded with Sal, Simul, Pial trees. There lies the Laljal Hills with red waters flowing from its red soiled terrains.There are tree house where you can make a night stay which is not only romantic on a full moon night but also adventurous.

11 kms from Belpahari, in the hills of Cherang, which in the edge line of Singhadoba and Burijhor village flows the Ketaki fountains in its own rhythm.

Walking down 7kms from Ketki lays Kakrajhor covered with dense forest greens over a stretch of 18kms.

The Hills of Kanaisor will fascinate you with its white "Quartz". During autumn, thousands of tribal people gather for a 5 days festival. If you are lucky you can spot "Shamukh Khol", a migratory bird named by the inhabitants, who comes here in the month of May-June.

Chorchita Yogashram and Choreshwar Shiv Mandir by the riverside hosts an ancient banyan tree with nearly 500 bats hanging. The place is 10kms from Rantua bus stop and famous for Ratanti Kali Puja.

Khutighat is actually the name of a river bank during the British periods, currently known as Rantua. Some saints lives here who is believed to have links with the saints of Rameshwar. The festival of the Goddess Kali is the main attraction here.

You can spend a thrilling moonlight light at a tent at Hathibari which is on the frontiers of three states Bihar, Jharkhand and Orissa. A well equipped Govt. bungalow is also there.

From Hatibari if you walk for 4-5kms in between the jungle of Sal, Pial, Mahua, tuning to the bird's song you'll be reaching Jhillibandh with its famous water-body.

The beautiful architecture of Rameswar temple with a perfect blend of science and arts stands on the banks of Subarnarekha and just 64kms from Jhargram. Legends has it that Sita asked Ram to build the temple of Lord Shiva with help of Vishwakarma, as she wanted to worship him. The most interesting fact about the temple is that the sun rays fall within the temple though there are no windows.

The beautiful dense forests of Tapavan lies just 8kms from Rameshwar temple which reminds the visitors of the epic Ramayana. Mythologically Sita lived with her two sons Luv and Kush in this forest. There is a fountain which leads to the ashram of Balmiki.