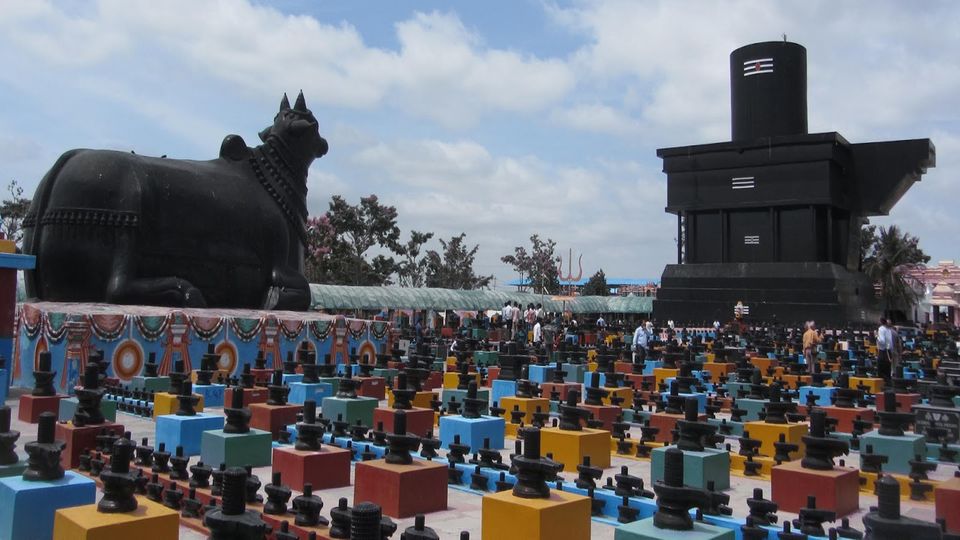 Kotelingswar, a place where the Bho Bhandari seats in a huge embodiment of one hundred eight feet. In India, there are many temples of Mahadev in India and in every temple they fondle in a different form but in Kolar district of Karnataka, there is such a temple where, when stepping, the imposing Shiva Shakti's power becomes far away.

Seventy kilometers away from Bangalore, Kolar, the same Kolar, which is known for all the gold mines, has got a great surprise in itself. Here is a temple where the highest Shivling of the world whose height is one hundred eight feet. Apart from this, if you count the smallest of all Shivlingas here, then they will get about 10 million rupees. Due to having one crore Shivling, it is known as Kottilieshwar.

It is believed that Devraj Indra had worshiped the water of ten million rivers after establishing Shivling on here to get rid of Gautam Rishi's curse and since then people have been able to fulfill their desire to fulfill their smallest Shivaling is established in the same way as bells are clamped in many temples.

At the time of going to the temple, Kolar Road is seen on both sides of the small Shivaling road from a distance, which makes a distant look that now the temple is about to come.

Once entering the main entrance of the temple, there is a small market where the puja can take the content of Archana. Shivaling is seen all over the temple complex as well as Shivalinga. Going forward by looking at these Shivalingas, there is an unmatched look at a huge Shivling. Hey what this !! That is, he is a hundred eight feet high Shivling which is the largest in the world. When Shivaji ji is so enormous, how can Nandi live behind? Fifty feet feet in front of the right Shivalinga, the high Nandi is frozen in such a way that it will be immersed in meditation for many years.

Built in the vast expanse of fifteen acres, this temple was built by Swami Sambhu Shivamurthy himself in the nineteenth century eighty by the blessing of Bholenath and resolved to establish a million Shivling. That is why this temple was named the name of Kottilieshwar. Since then, the order of establishment of Shivalinga by devotees is continuously coming. Till now Pichanbha Lakh Shivaling has been established and continuous increase in this number is continuing. Maybe even the number of these articles has become 10 million. Apart from Shiva's temple there are eleven temples after the smaller ones which include Brahma, Vishnu, Ganesh, Annapurna, Ram Lakshman Sita, Venkat Ramana Swami, Panduranga Swami. Apart from all this, the marriage of poor girls is also done by the temple committee by taking only two hundred rupees. A guest house has also been built for the devotees to live. During Shivratri, devotees gather in the number of lakhs here and that day becomes a tiger. The temple complex is open from 6 a.m. to 9 p.m. Aarti is performed every day at two times in the temple premises in the evening. The people who come here bind yellow threads on the trees present here to fulfill their wish. Here the resolution of the establishment of Shivling is overcome, especially the interference in marital affairs is overcome.

When to go - if the weather here is pleasant every year, then it can be visited anytime, but due to lack of cold in the winter, it is mentioned above.

How to go- Kotelingswara located in Kolar is seventy kilometers away from Bangalore. The main station here is well connected to the bus, taxi and train from Bangarpreet Bangalore. Temple from Bangarpet can be visited by local bus or taxi.

What to see - here in addition to the temple, the dining of the Kolar, Chikka Tirupati, Bangaru Tirupati and the inner ganga can be seen.