The Greatest Gates of India - Toranas of Sanchi Stupa 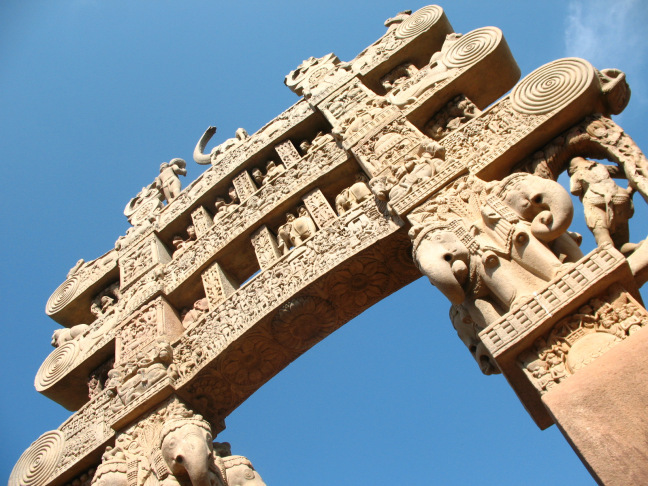 Over the past editions of this series, I have covered some of the most historic gates in the country. So far I have been mostly covering gates built in Islamic or Post Islamic period in the country. This somehow is making it a more or less monotonous journey. Today, I will be covering a set of gateways which dates back to the birth of Jesus Christ.

The Toranas (Gateways) of the Great Stupa of Sanchi are the oldest freestanding gateways in the country and are a true masterpiece of architecture. While the original stupa of Sanchi was commissioned by the greatest king of ancient India - Ashoka, its present shape was given by Agnimitra Shunga - son of the great Shunga king Pushyamitra. Ashoka Built the original brick stupa in 3 rd century BCE and almost a century later, Agnimitra made the present stone stupa over the original one - which might have been destroyed by his father. The overlayed stupa stood to be almost double the diameter of the original one. Another addition that happened during the Shunga rule was the peripheral boundary wall around the stupa. It took another century for the first freestanding gateway of the country to be erected. The primary idea behind the gates was to show the stories from the life of Buddha to the onlookers. This change in time also created a vast difference in the style of the boundary and the gate. While the boundary wall is totally free from any inscription, the gates are full of it.

The Satvahanas, who succeeded the Shungas as the ruler of the Gangetic plains, is given the credit of the gates. Though the gates were not built together and also they were not built under the royal patronage but the idea must have been initiated by one of the Satvahana Kings. The inscription on the southern gate, the oldest among the four, reads - 'Gift of Ananda, the son of Vasithi, the foreman of the artisans of Rajan Siri Satkarni'. The identification of the king is unclear but it is true that many of the Satvahana rulers were called Satkarni. There have been plenty of courtesy inscription on the gates which makes it clear that the gateways were commissioned by rich Buddhists and they did not get any royal patronage. However, the art and style were greatly influenced by the Satvahanas. The guild of ivory carvers from nearby Vidisha have done the stone carving - this probably is the reason that despite different sponsorship, the gates look similar.

The gates were made of stone but the inscription looks similar to that on timber. This was the first of its kind and the artisans followed their experience with wood. The entire body of the gateways was covered with extensive narrative sculptures. These reliefs show events in the life of Buddha but there has no order to it. This clearly indicates an involvement of various devotees in the construction of the gates. Whoever paid the money has curved their favourite events and that has made a number of repetitions of the same story from Buddha's life. It is the aniconism in Buddhism that has prevented Buddha in a human figure to be curved. He is represented by symbols related to his life. An empty throne, a riderless horse or the Bodhi tree has been used to symbolise the lord.

The Gates follow a similar architectural style - all the gates are basically made of two strong square pillars with three horizontal architraves. Each of the base columns is capped with an extremely decorative load bearing column capital. The capitals of Toranas of Sanchi also show improvement in terms of its architecture from the earlier capitals. While the Mauryan Capitals were largely two dimensional, the Bharhut capitals were the first to have a decoration on all four sides. The Sanchi capitals are more improved and have decorative figures on four corners making it stronger and more beautiful - creating a circular pattern in the plan. There are four column capitals which can be seen here - Lion Capital, two sets Elephant Capital & the Yaksha Capital - of these the Lion Capital has more resemblance with the Bharhut style while the Yaksha Capital is of completely new style.

The architraves of the Toranas are rectangular beams with the wider side display. All the architraves have both its sides rounded with a whirl inscribed on the rounded corner. The horizontal column above the capital reduces its size but remains square and holds the architraves. On top of these columns rises a Buddhist Srivatsa Design.

The Southern gateway was the first to be erected and after that, the Northern, the Eastern & the Western Gateway respectively followed it. Within four to five decades from the first one, the great stupa had four gates in four directions. The Southern gateway architraves have an inscription on Ashoka's visit to Ramagrama, Buddha's seven incarnations and about the war over the relics of Buddha upon his death. The pillar capitals of this gate have Lion which is very similar to that of Ashoka Pillar. The Pillars of Southern Gate mostly have stories relating to Ashoka's life. The Northern Gate architraves have stories related to Buddha's attainment of bodhi overcoming the temptation of Mara, the demon. The pillar capitals of Northern Gate have elephant looking in four directions. The panels on the surfaces of the pillars are filled with various miracles performed by Buddha.

The Eastern Gateway, the third in the chronology is the richest in terms of the inscription on it. The Architrave has stories about the great departure of Buddha when he detached himself from royal life and went to find Bodhi, the riderless horse depicts this symbolically. The column capital of this gate also has elephant but this is different from Northern Gate as here the elephant is seen sidewise with a rider on top. The only surviving relic of the famous Yakshini is seen here on top of the capital and under the lower architrave. The column surfaces are again covered with various stories from the life of Buddha and his miracles. The Western Gate, the latest of all, on its architraves have the stories of war over Buddha's relics and the temptation of Mara. These stories have been shown in earlier gates also. The column capitals have four Yaksha facing four directions - in a manner of supporting the architraves above. The Pillars have relics from Yataka.

The Toranas of Sanchi are not only significant considering its importance in the Architecture of the country but also internationally. The Paifang Gateway of China, the Torii Gateway of Japan and the Hongsalun gateway of Korea - all are derived from the style of Torana in Sanchi with modifications and improvement.

How to Reach: Sanchi is about 50 Kms from Bhopal. Both Vidisha & Bhopal are nearby Railway Stations - Bhopal being better connected with rest of the country. Bhopal also has an airport. From Bhopal or Vidisha, public bus, car, auto can be availed.

Best Time to Visit: Sanchi Stupa complex is open from sunrise to sunset every day. Summer months should be avoided considering scorching heat in the region.