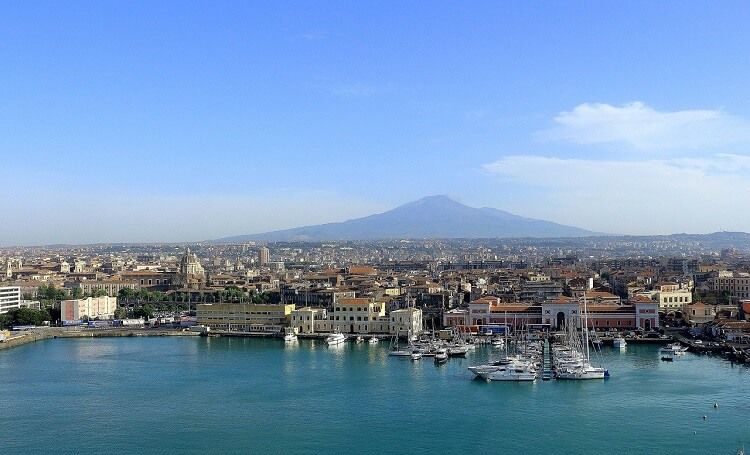 Because I am a lover of heat, I chose for October a destination where I can feel good in terms of weather, namely Sicily.

I wasn't wrong, the temperature was 25-27 degrees and it was raining - only in 2 nights (in fact, even if it rains during the day, it is for a very short time, it doesn't cool down and the sun appears immediately).

I opted for two accommodations of 3 nights each: 3 in Palermo and 3 in Catania. I traveled Bucharest-Palermo with Ryanair and Catania-Bucharest with Wizzair. I made the trip from Palermo to Catania by train -3 hours.

I chose the accommodation from booking.com and I opted for studio / apartment, as I usually do, because my wife and I like to have breakfast in the studio kitchen and sometimes we also serve lunch (we buy from street food food and drink and dessert from the supermarket).

Palermo is a beautiful city, very clean, with many sights to visit: the Cathedral, the Palace of the Normans with the famous Palatine Chapel (which Guy de Maupassant said is the most surprising religious jewel created by the human mind and perfected by artists - a remark that I read it in a comment of an AFA member and I share it with others because it is so in reality), Pretoria Fountain, Massimo Theater - the largest theater in Italy, Politeama Theater - with a beautiful pedestrian area in front Garibaldi Garden - where the bust of Nicoale Balcescu, the Church of Santa Maria D'Ammiraglio.

I recommend walks on Via Maqueda (where I also had accommodation), a pedestrian street on weekends and every night with lots of shops, bars, terraces, street food. So many people go for a walk (both tourists and locals), that you have to be constantly careful not to hit someone (for those who remember, it is something similar to Lipscani Street in Bucharest in the 70s and 80s). Despite the crowds, the atmosphere is very pleasant, relaxing. It is also worth a walk on Via Vittorio Emanuele, from Puerta Nueve to Puerta Felice and Via Roma.

The train route from Palermo to Catania passes through a beautiful area of ​​hills and mountains, with a lot of vegetation which makes the three hours pass relatively quickly.

I chose the accommodation in Catania deliberately near the train station (Casa scogliera D'Armisi on booking.com - an ultra-spacious clean apartment, perfectly equipped, with sea view, to which I would give without hesitation 4-5 stars) because I had I'm going to make two trips. The city of Catania itself is not as beautiful as Palermo - I gave it a few hours for walks on arrival and a few on departure.

Instead, it is the perfect place to visit Sicily two cities (in opposite directions): Syracuse and Taormina. One day I was in Syracuse - a train ride. It is a very old city (the first Greek colony in Sicily - around 700 BC). The new town is quite big, but I didn't visit it because it is not of tourist interest, but the old town, located on the island of Ortigia (don't be scared, its access is on two bridges of maximum 100 m) is worth visiting. The ruins of the Temple of Apollo (next to which there is a street with a fish market and some specific places), Diana's Fountain, Dome Square, Aretusa Fountain (one of the two places in the world where the papyrus plant grows) and, why not, the terraces there are places not to be missed on the seafront. Narrow streets, with old buildings, confectioneries and ice cream parlors everywhere are suitable for a walk.

Another day we took the bus Etna interbus (bus station near the train station) and we went to Taormina (we opted for the bus because the terminus station is at the top of the city, in time the train will leave you at the bottom and it's a lot walking and climbing even to the funicular). As soon as you get off the bus, Taormina leaves you breathless through the landscapes it offers you.

After walking through it, you realize that one day is not enough to enjoy the beauty of this city. It is located on the slopes of a mountain, somewhat similar to Monte Carlo, but very different in architecture, ambiance, vegetation, picturesque.

I first recommend a descent by funicular (cable car) to the bottom of the city from where you go down the steps to the rocky beach where the famous Isola Bella (nature reserve, UNESCO heritage) accessible by foot on a kind of path which comes out of the sea, when there are no waves (as I caught) situation in which the water rises to the level of the knees.

It is a very pleasant place where I spent an hour looking at the sea and listening to the sound of the waves and the stones rolled back into the sea (unique, pleasant noise, which I have never heard before).

We also relaxed on a terrace where the waves were almost coming to the table and we enjoyed a beer - it and a bitter campari - for which we left 9 euros (it was worth it only for the ambiance).

After that we went to the top of the city where we had planned to visit the Ancient Greek Theater (please what is left of it) but we gave up (from ctime lag and a bit and due to the rather high price: 10 euro / pers.). I preferred to walk on Via Umberto and a few side streets and I did not regret any second of my time. here.

Buildings with old architecture, specific to the area, in perfect condition (all renovated or kept in good condition, painted in pleasant colors, with lots of flowers on balconies or on terraces), shops of all kinds - especially with souvenirs and more chosen with Sicilian ceramics, of a special beauty and quality, chic terraces and bars invaded by flowers and greenery and some viewpoints to the sea with dream views.

We also stopped at a kind of pastry shop where we ate a pair of calzone and a slice of pizza - very tasty, sprinkled with local berica - hello!

We hardly parted from this wonderful city that must be seen at least once in our lives! On the way from Catania to Taormina we also saw the Etna Volcano smoking, and due to the ash emitted, the next day (when we left for home) all the flights from Catania airport were delayed, the air traffic being disrupted.