Tirol Travel GuideTirol TripsStart Of A New Year And A New Friendship In The Magical Snow - Kitzbuhel Town, Austria #Photosabroad

Start of a new year and a new friendship in the magical snow - Kitzbuhel town, Austria #photosabroad 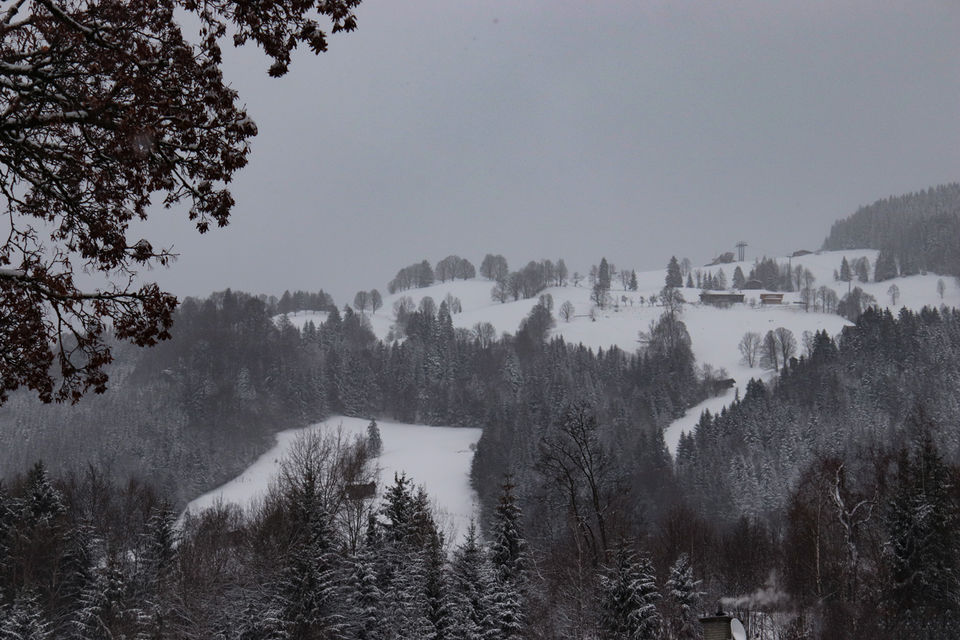 Austria is a German-speaking country in Central Europe, characterized by mountain villages, Imperial history, and Alpine terrain. Often confused by non-Europeans as ‘Australia’ by the ring of it, is the homeland of Mozart, Strauss, and Freud among others.

The lake that flourishes through the town 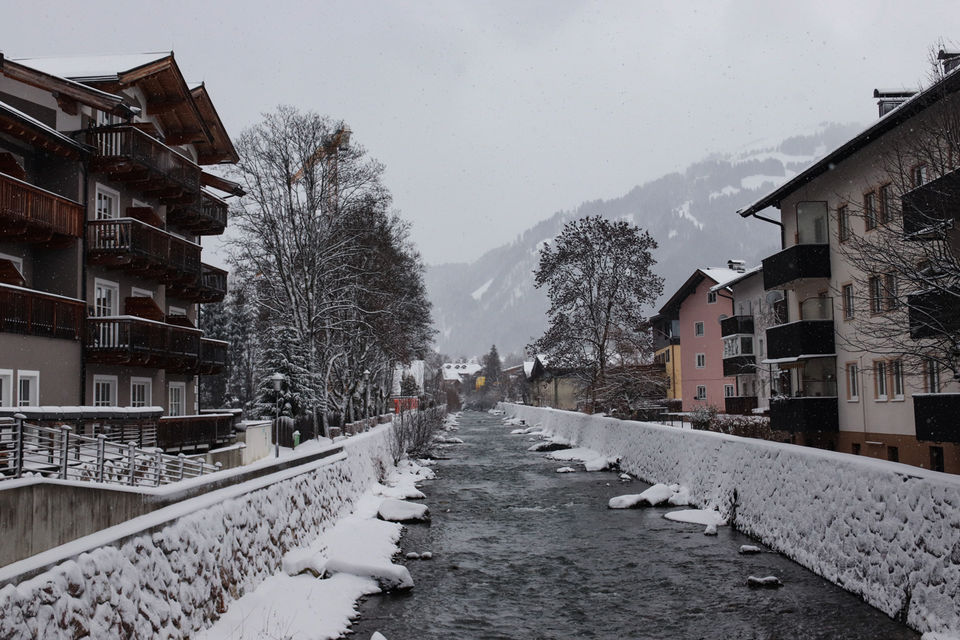 With a limited understanding of the country, I set on a journey to discover the glamorous Alpine town, Kitzbuhel. Famous for it’s Packed events during the winter, including a traditional Christmas market; fireworks display on New Years and A fur-clad celebrity parties stroke as the fanciest way to begin the year.

Located in the Tyrol province of western Austria, Kitzbuhel is an Upscale winter resort. The town is situated at an elevation of about 800 m above sea level with the highest point of the alps at around 2000 m. The Ski area extensively stretches over 230 km of slopes and is known for organizing the Skiing World Cup every mid-January since 1967 making it a legendary city for Ski Sports. 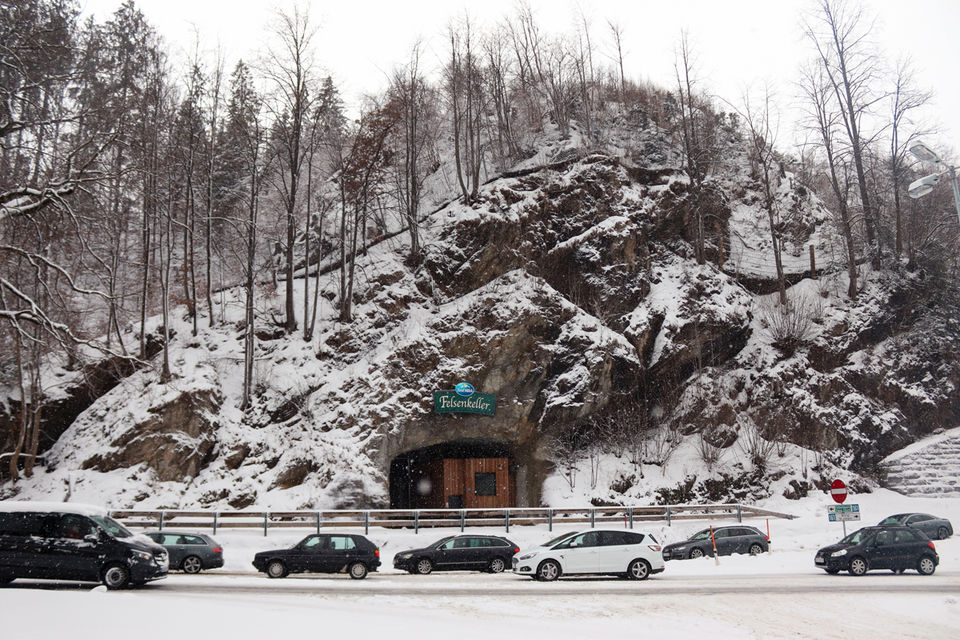 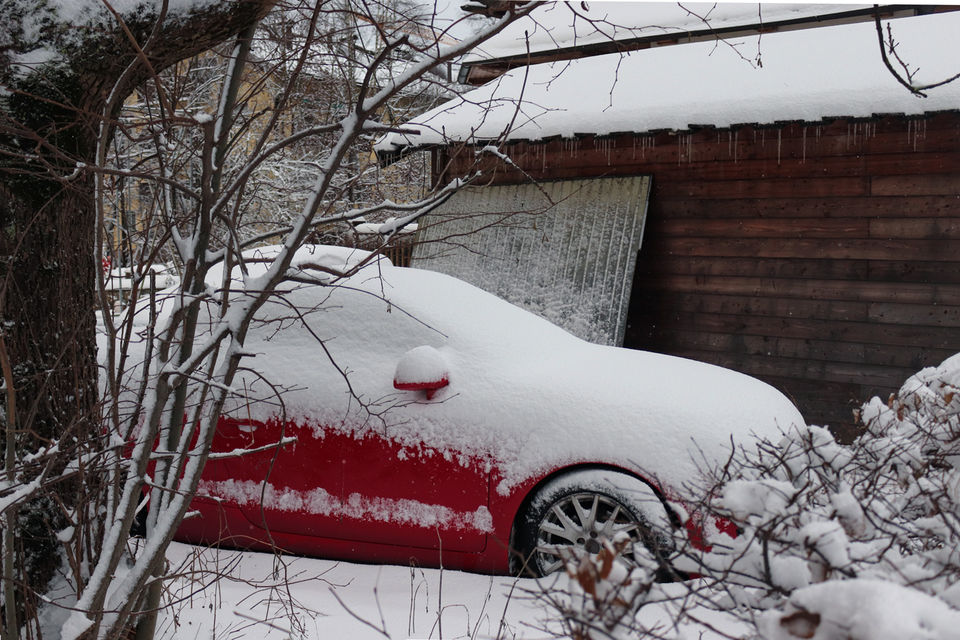 Here I was with no idea or inkling about Skiing in the best Skiing town in the world. I wondered what one might do as a non-skier while sipping on my exquisite wine in a bar by myself. I wanted a local’s take on the town. Call it coincidence or fate, a lady in a humongous skiing ensemble grabbed a chair next to me. She flaunted the biggest smile I had received since the time I set foot into the town. I hoped that she spoke English well enough to guide me on non-skiing activities. “A bad day for skiers, huh?”, She stated. And, I went something like, ”Not sure, if you can tell, but I ain't-a skier.” To which she smiled, and then the conversations had begun that didn't seem to end thankfully. 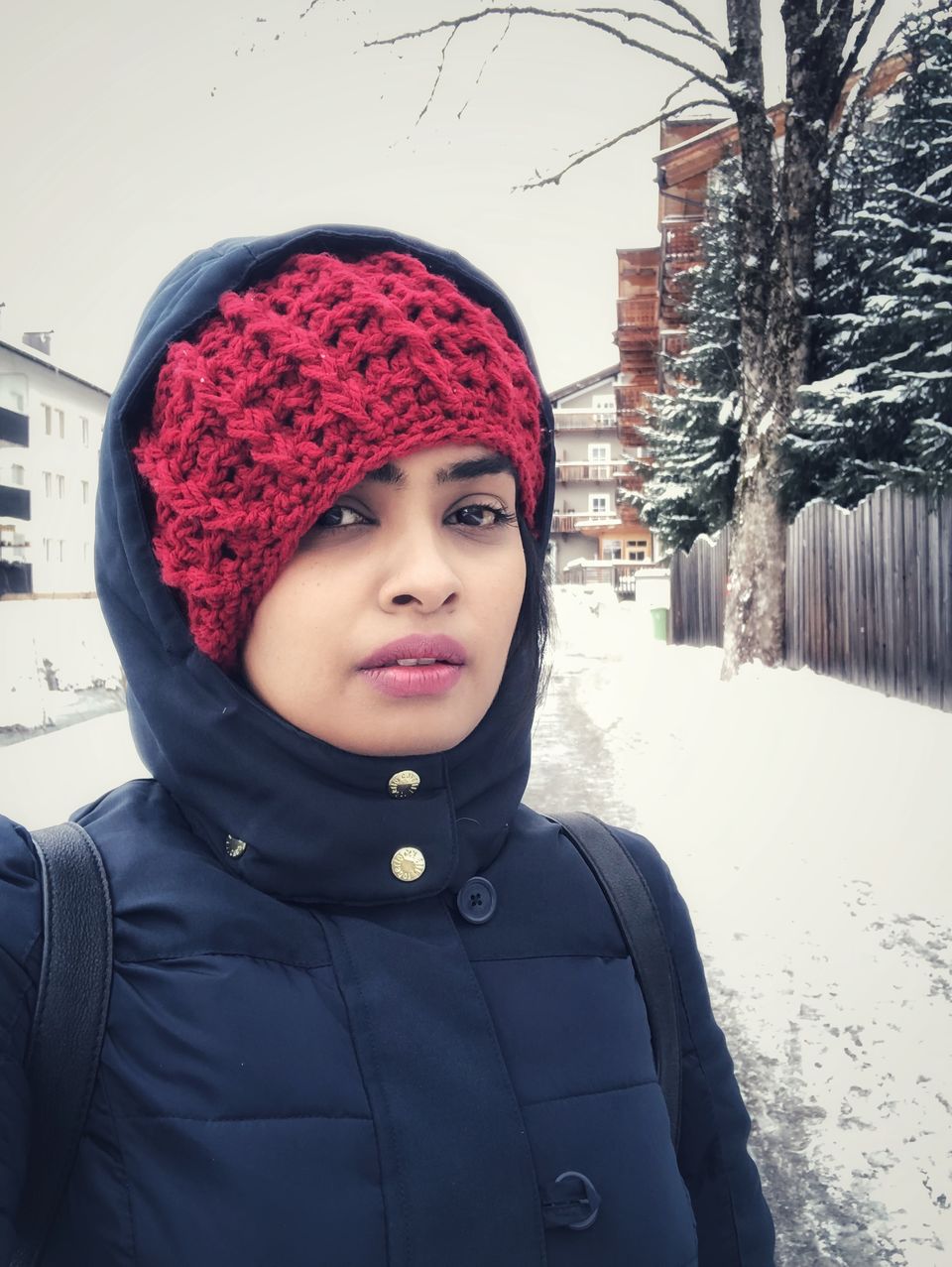 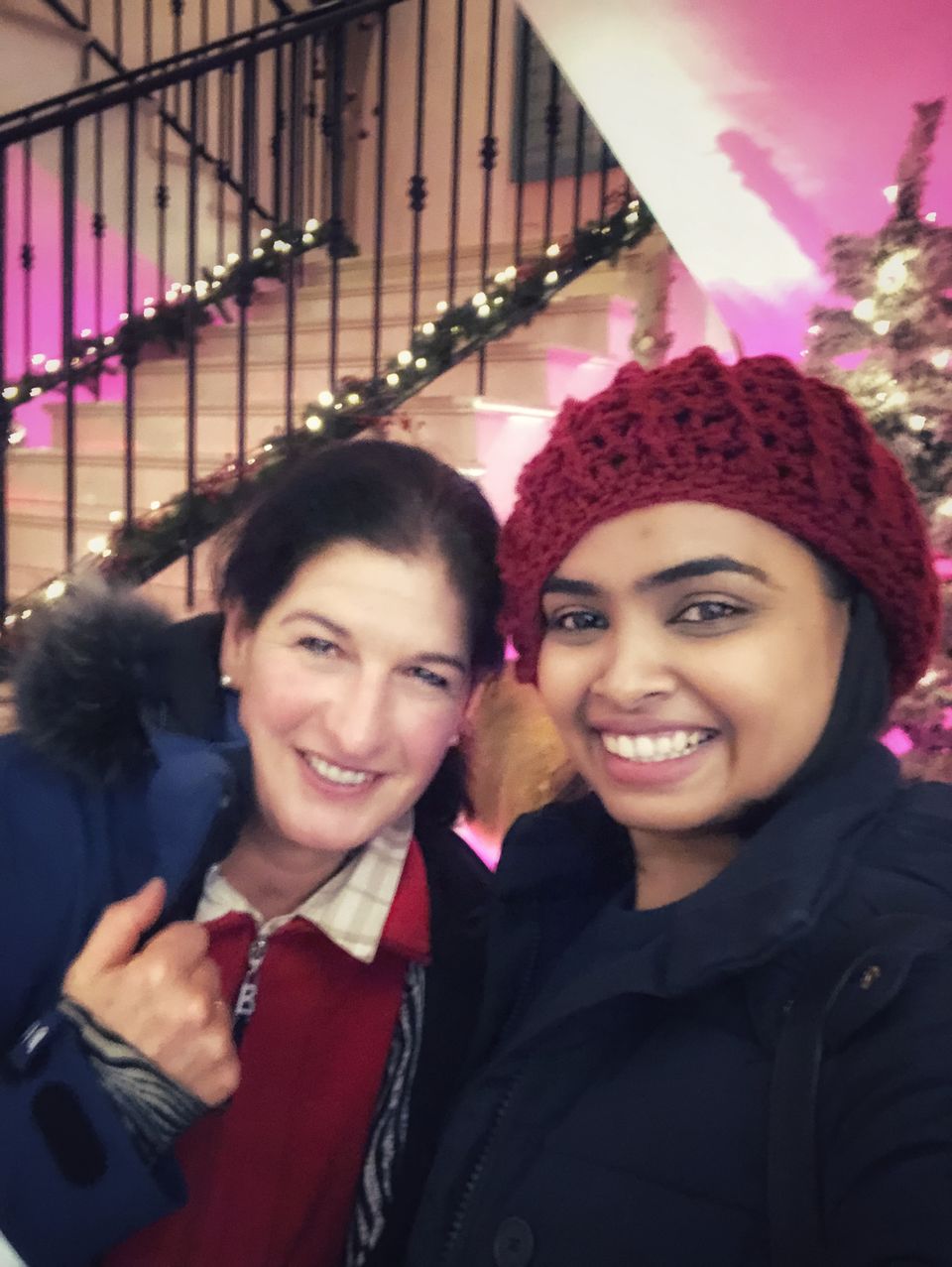 Spending about an hour conversing, I had gathered that Stephanie was part Austrian and part German who lived in Munich, Germany and visited Kitzbuhel every month as a frolic getaway. She gave me a brief insight into the remarkable town and invited to join her on the walk she was taking through the village since skiing was out of the picture.

A random person at Kitzbuhel 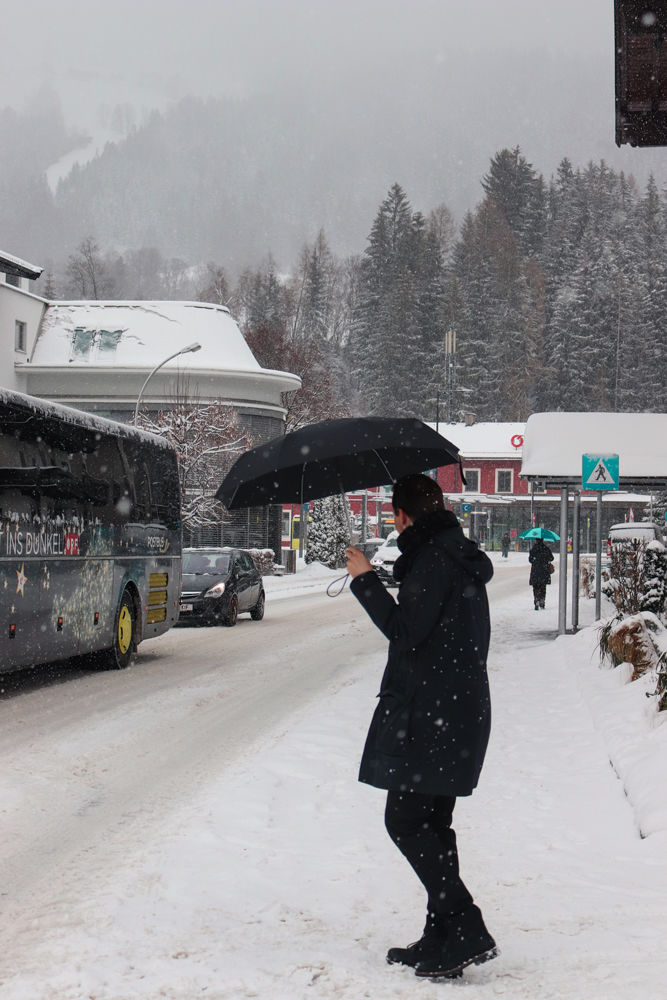 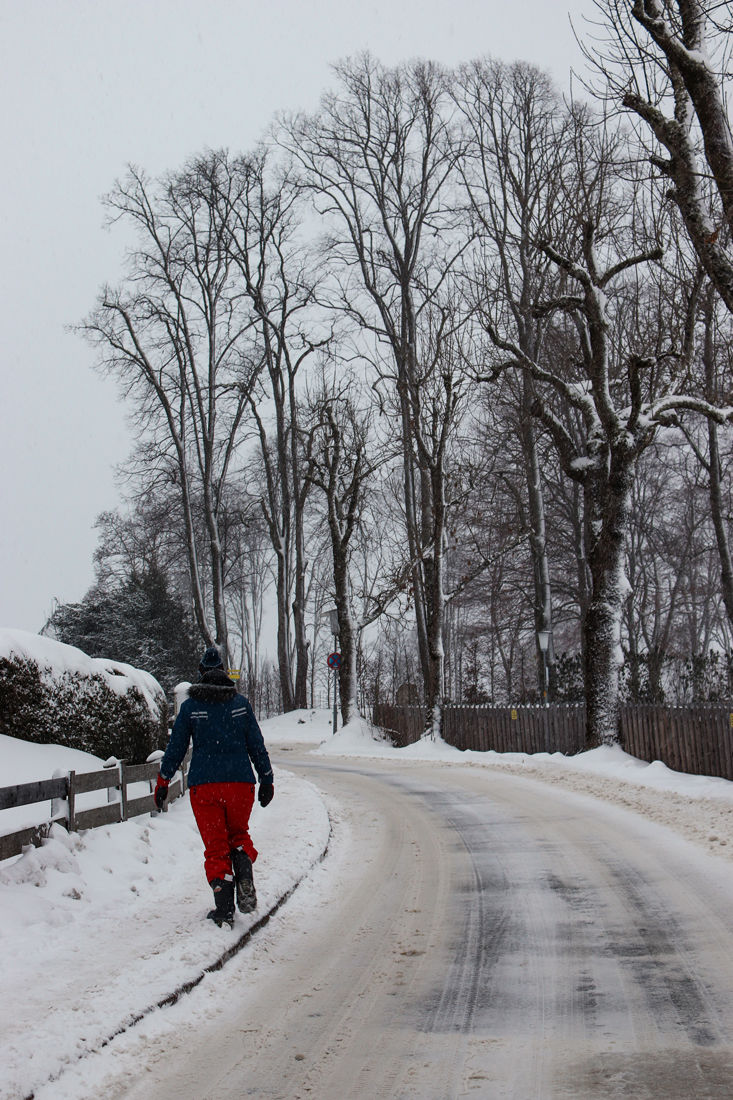 Even though I am antagonized of long walks, with camera in one hand and enthusiasm on the other I was all geared up for the stroll. Sooner we set foot out of the bar, my bare hands froze, and it seemed impossible to capture images without preparation. I decided to make a mental note of the places we were headed to and be back the next days with some precaution to nab the photograph.

A few minutes into the hike she asked, “Do you know Strief?”. To which I nodded, “No.” She pointed her finger to the pike and mentioned The Streif to be the most spectacular downhill Ski race track in the world. In downhill ski racing, the Streif is regarded as the ultimate challenge because of the diversity of its terrain. It brings the best skiers from every corner of the world together in a gladiator-style fight for the honor of victory on the Streif. Learning that made me want to consider giving skiing a chance once in my lifetime while Stephanie, on the other hand, had been Skiing since she was 9.

Longshot of the strief region

I was fascinated by the setting of the town. A parched solitary tree bounded by clear snow that may seem gloomy to others, but to me, it hinted gleamy seasons greeting card in my mind. Savoring the fresco gabled houses with archways and the pastel color-washed facades seemed to have a visual impact on my eyes. The people on the streets were scanty, and the ones that did stroll around felt compelled to do so in Ski-boots. I watched plenty of wealthy guests promenade into beautiful resorts and many of the women wrapped in voluminous furs, and men frequently towed by large dogs.

A random beautiful house in the town 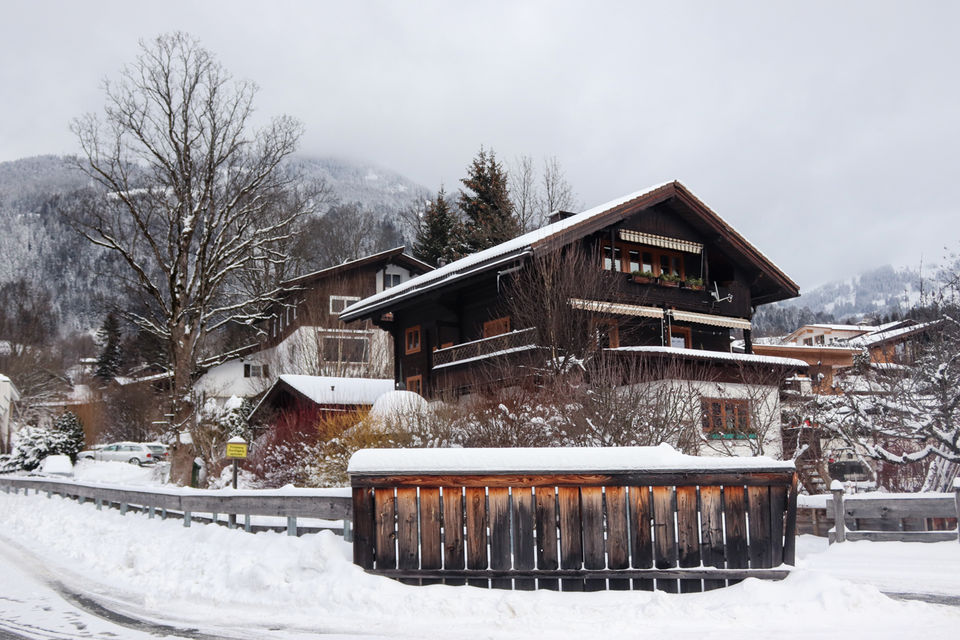 The railway cross of the town 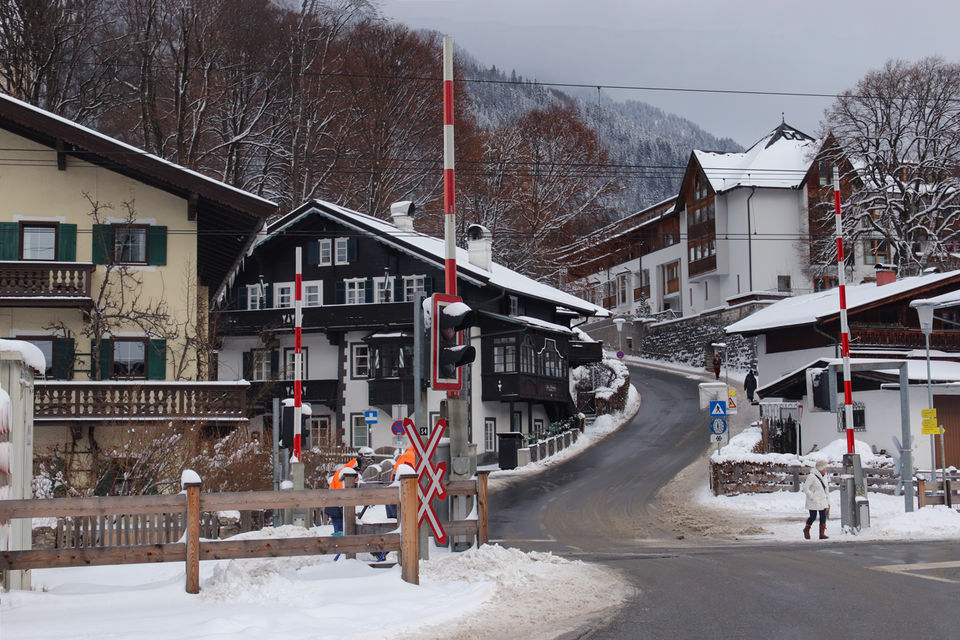 Strutting long amidst the snow on the ground, we had worked up quite the appetite. Stephanie recommended an elegant resort that boasted one of the best gourmets in Tyrol. We headed to the Spectacular A-rosa Resort's Steakhouse Kaps. I had completely surrendered to her culinary choice and was keen to try what the alpine region had to offer. We were served prime cuts of meat and a wide selection of wine, set against the awe-inspiring backdrop of the Tirolean Alps. For desserts, we enjoyed the ‘Kaiserschmarrn Mit Apfel’ which was a fluffy shredded pancake, either served with baked plums or apples and berries. Delightful Indeed! At the same time, I also realized unless otherwise stated, the food on the mountain does not come cheap and doesn’t come without ‘Reservation.’ 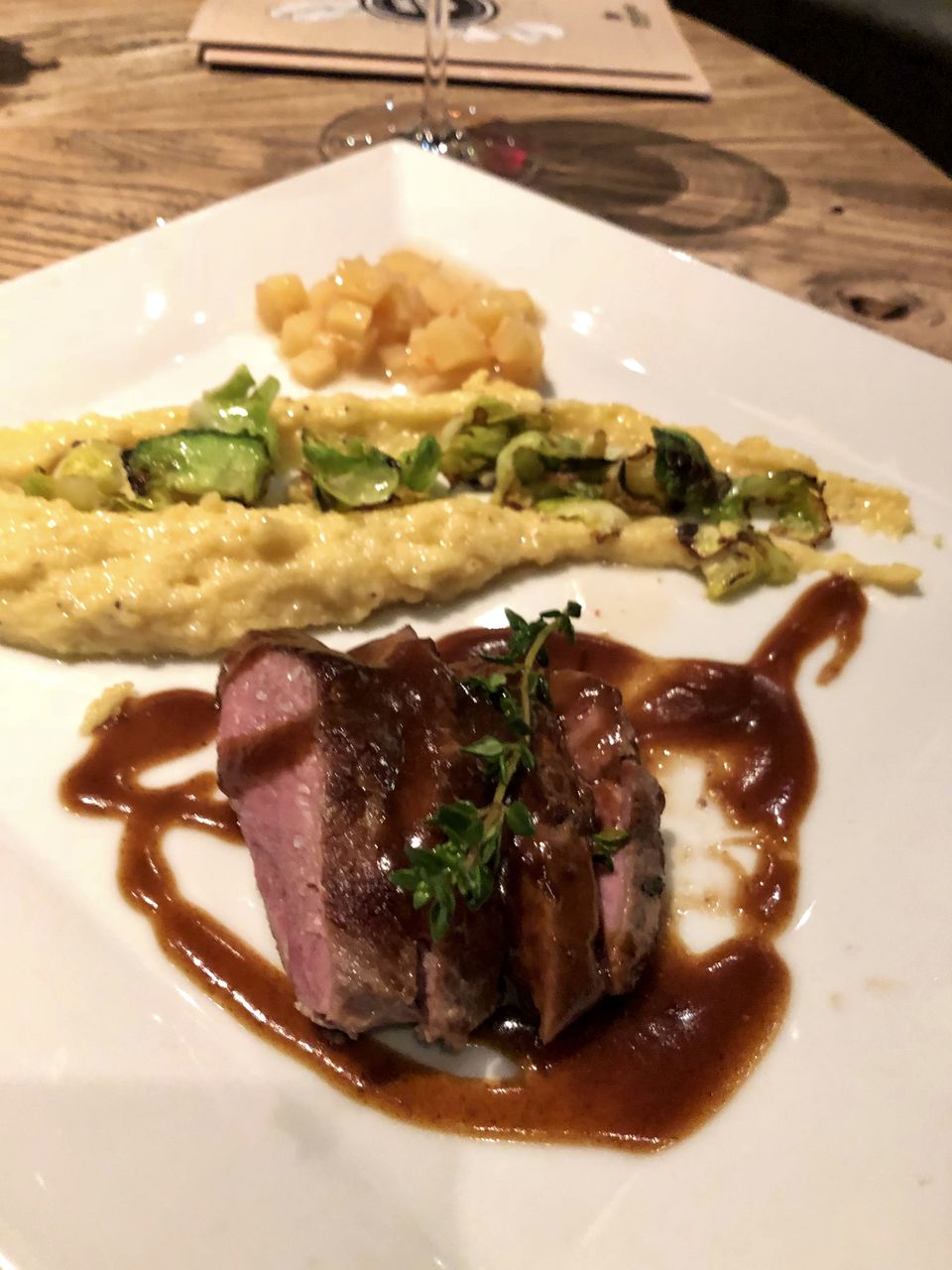 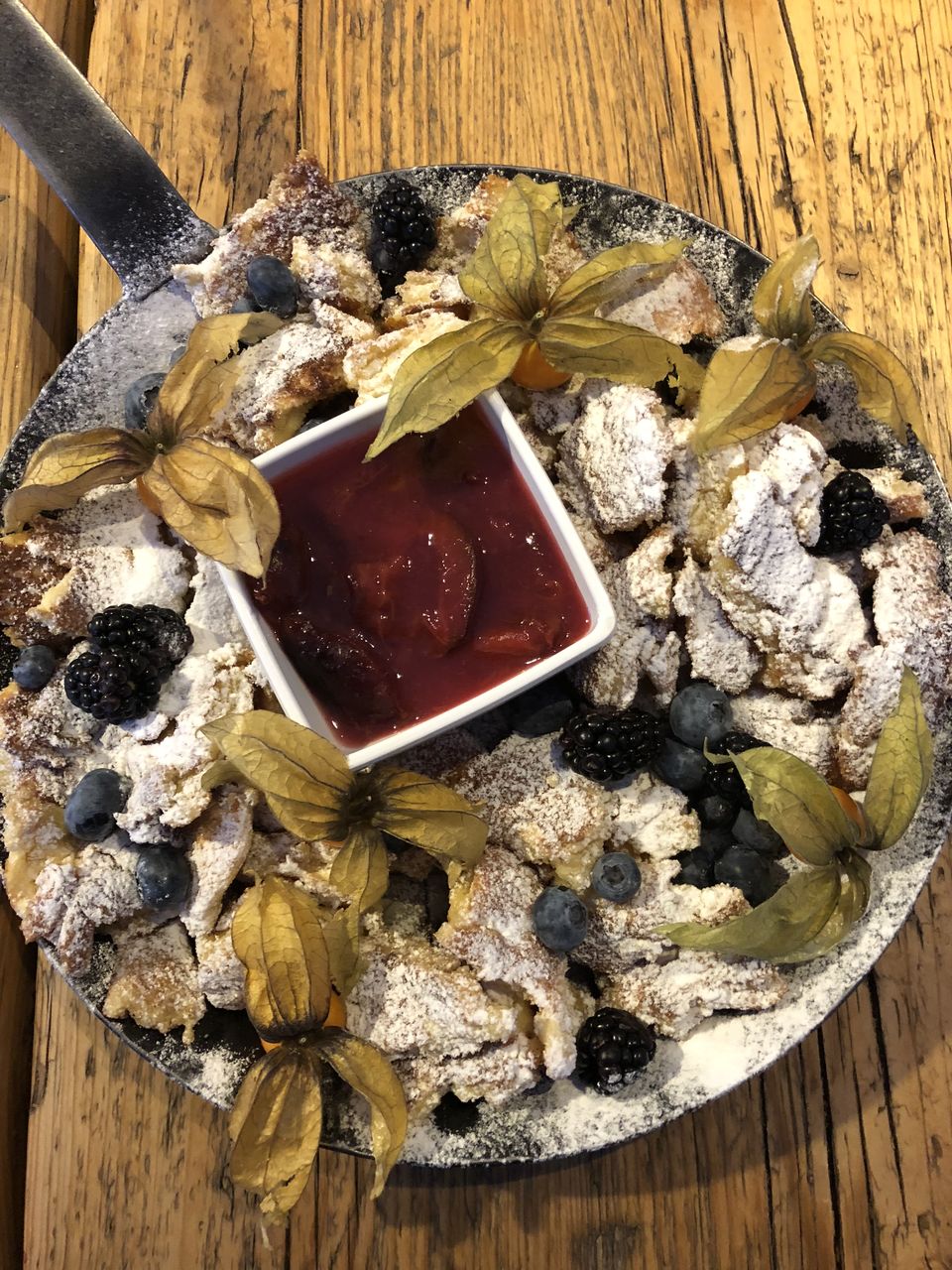 My new found chum insisted on showing the downtown area which was close to her resort. The city center was traffic free with cobbled-stone streets. Delicately walled, the multi-colored old town with quaint church genuinely appeals to non-skiers. The pretty pedestrianized streets are lined with luxury hotels, upmarket boutiques, fine dining restaurants, and cafés. From haute couture to consignment, it’s all here and walkable. Before we bid goodbye and headed off to our respective resorts, she handed a list of things I could visit by myself. 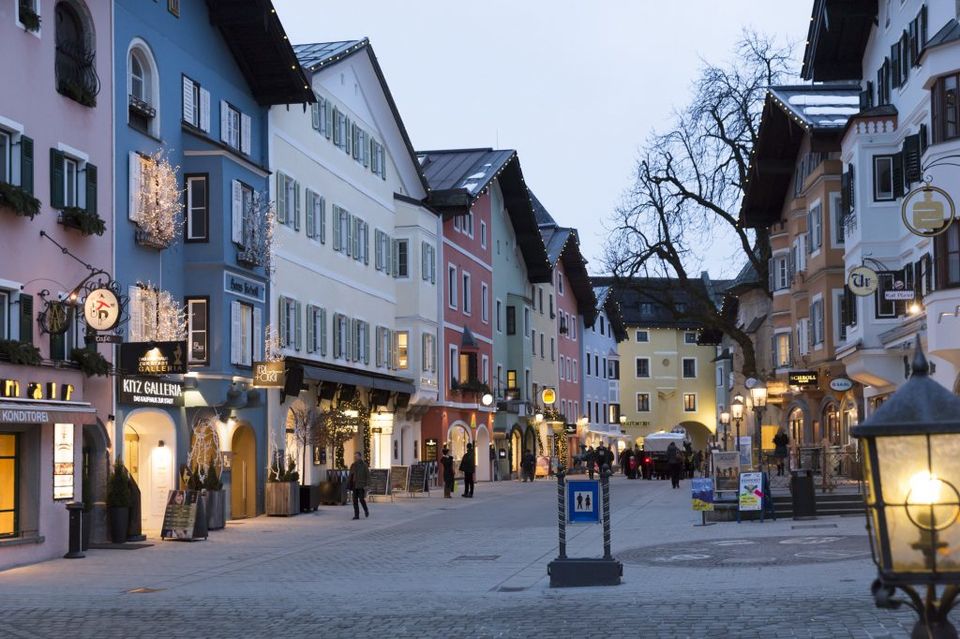 In the coming days, I had enough time to explore the recommendations. I began by revisiting the previous spots and ensured the Camera was weather sealed. From the Picturesque Schwarzee River, the amusing City Museum and the bumbling nightlife of the town, all seemed to put me at ease to live up the icy experience. Steadily, one discovers that Austrians enjoy one of the highest living standards in the world and want to keep it that way. When the time came for me to bid goodbye to Kitzbuhel, I knew I wanted to stay longer and learn how to hit the slopes. All in due time of course! 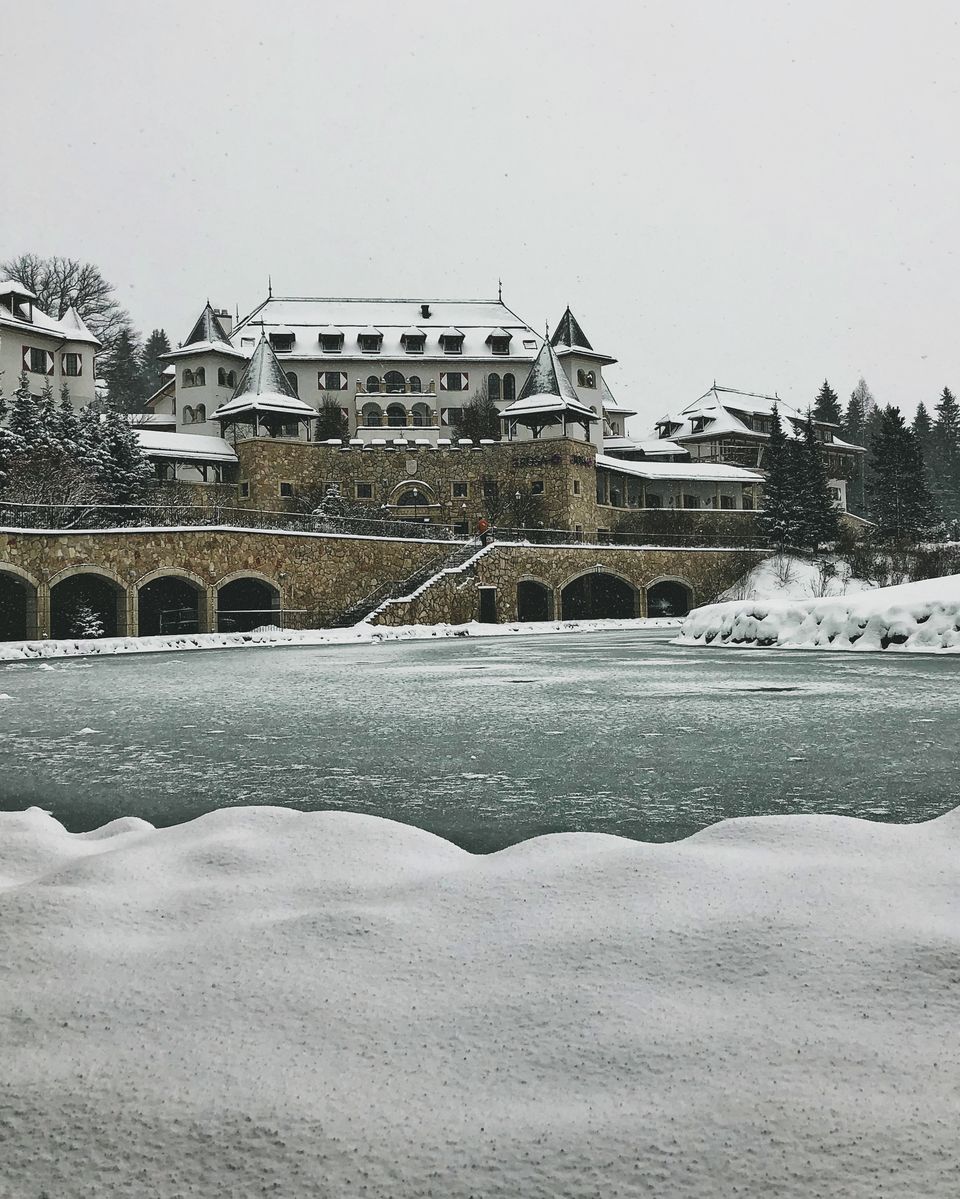 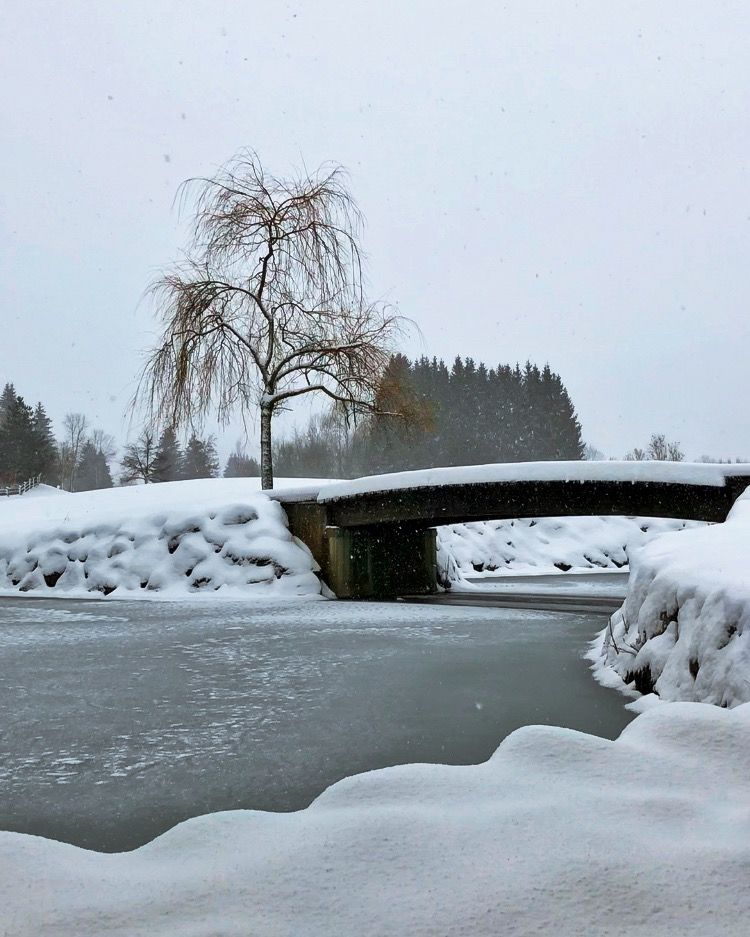 I conceived sporting achievements, fashion, and food as part of Kitzbühel's unique culture. Set in the seam of jagged and rugged mountains, Kitzbuhel is the playing field of the Rich and Famous.