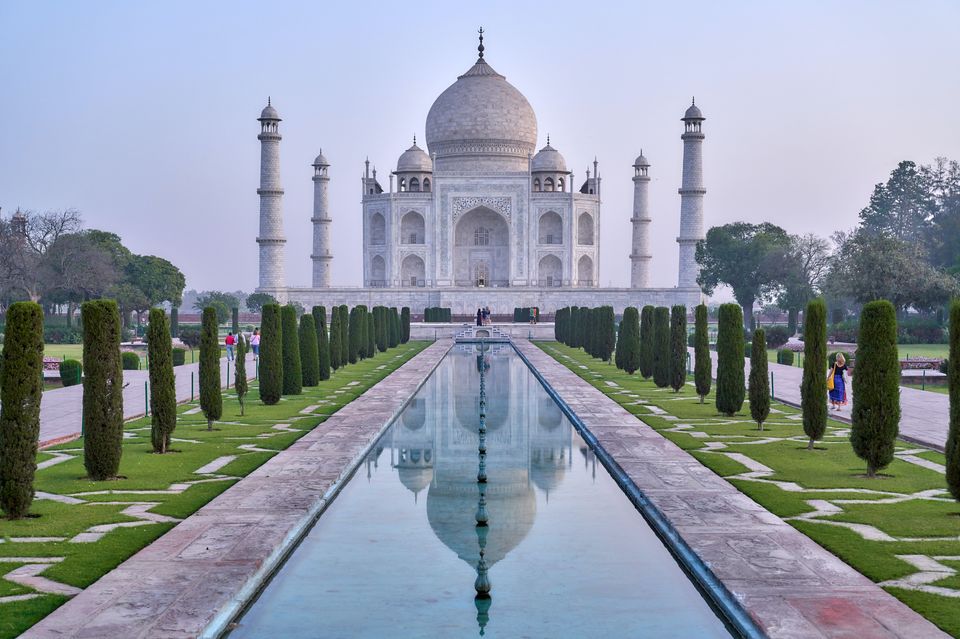 Not deviating from the point, jumping straight into “Must-Visit Historical Monument in Every State.”

1. Want to perceive the god who protects humankind from the troubles of Kali Yug?

Tirumala Venkateshwara Temple, Tirupati, Andhra Pradesh: Tirumala is a Dravidian architectural marvel and the wealthiest temple globally. By being a heritage site, it highlights the legacy and image of the Vijayanagara dynasty. Sri Venkateshwara temple, an avatar of Vishnu, is the most famous and sits atop one of the seven peaks of Tirumala Hills.

2. Why visit Italy to see the colosseum?

Rang Ghar, Sibsagar, Assam: Often referred to as the 'Colosseum of the East', Rang Ghar is one of the oldest surviving amphitheatres of Asia. The name translates to 'House of Entertainment'. It is a must-visit in Assam, for it is a brilliant specimen of the Ahom style of Architecture.

3. Visit this fortified city with a history dating back to the 12 century.

Thembang Village, Arunachal Pradesh: Literally meaning ‘Lotus like Village’, Thembang village is a UNESCO preserved fortified city. The authenticity, cultural richness, historical significance, and numerous stories hidden in the village’s wooden gates invite travellers to plunge into this unrealistically beautiful village. Paintings, murals and graffiti-filled walls, along with the ancient ruins on the inside, and lush-green hills, snow-clad peaks, steep gorges on the outside, leave anyone in the peace-filled aroma.

4. Here is the holiest site for Buddhism followers.

5. How can it be not known who constructed a fort as big as this one?

Ratanpur Fort, Chhattisgarh: Ratanpur Fort is a dilapidated fort whose information of history remains obscured in mystery. Nonetheless, it deserves to be visited once for grand buildings, history, architecture, and stories hiding from plain sight.

6. Pray in the church, similar to St. Peter’s in Rome.

Basilica of Bom Jesus, Goa: Goa, the land of beaches, cherries and virgin cocktails, is also famous for its Portuguese culture. This Roman Catholic basilica is a must-visit for anyone interested in the history of Christianity.

7. Witness the monument on the Indian Currency notes.

Rani ki Vav, Gujarat: Translated as Queen's stepwell, the Rani ki Vav is a UNESCO World Heritage Site constructed in the 11 century. The multi-storeyed pavilions and panels were hidden only until recently when the Vav was revealed during excavation work in the 1980s.

8. Perceive the structures of the past.

Jal Mahal, Haryana: As the name says, Jal Mahal is a pleasant building in the middle of the water with a peaceful surrounding. Constructed by Shah Quil Khan in 1591, it is a mix of Hindu and Islamic architecture.

9. Find the key to inner peace in Key Monastery.

Leh Palace, Ladakh, Jammu and Kashmir: The Leh Palace is the righteous branch of Kashmir's title of heaven. Prevalent as ‘Lhachen Palkhar’, it is set amidst the perfect backdrop of Ladakh mountains and Stok Kangri.

11. Visit one of the prominent Char Dham's Temple.

Jagannath Temple, Jharkhand: It was constructed in 1691 in Kalinga architecture and is a pilgrimage site for Hindu devotees. The grandeur of this temple comes alive during the Jagannath Rath Yatra, which is a symbol of harmony, unity and brotherhood.

12. Trust it or not - Clive's house will give you jitters.

Clive’s House, West Bengal: Apart from the Rosogolla, culture and heritage that West Bengal brings to the Indian table, it is closely connected with Indian Colonial History. Clive was a British officer who was involved in establishing the East India Company. It is the oldest house in Dum Dum, Kolkata, and many locals consider it haunted.

13. Cradling the squanders, Hampi is the mother of destruction - evenly breathtaking and relaxing.

Monuments at Hampi, Karnataka: Hampi is the beauty that withstood the sedulous and glorious history. Nestled along the Tungabhadra River, not just one, but the whole city speaks for itself.

To say that you will be amazed by the architecture, sculptures of the town would be an understatement, for this city will offer surprises in all corners. From being Shiva's capital, the chilling shacks, to the bewildering hillocks, you will fall in love with the city as a whole.

14. Transfer yourself to the prehistoric age.

Edakkal Caves, Kerala: These naturally occurring alcoves will teleport you to the historic rock and wall carvings. For adventure seekers, a 3-hour hike inside the caves sounds like the perfect getaway.

15. Proceed to witness the place where the ashes of Buddha are preserved.

Sanchi Stupa, Madhya Pradesh: To preserve the relics of Buddha, Emperor Ashoka, in the two-century, had built a hemispherical structure of bricks. Tagged as a UNESCO World Heritage Site, the Sanchi Stupa is a famous historical and pilgrimage site.

16. The tomb place of Kasturba Gandhi and Mahadev Desai.

17. World War II has left marks even in the peace-loving nation.

The War Cemetery, Imphal, Manipur: The battle of Normandy and the battle between the allied forces and Japan are very similar. These both resemble the blood and death battles during World War II. This war cemetery holds 1600 soldiers; each grave is marked with a metal plaque.

18. Visit this glorious Megalithic bridge that propagated trade and culture.

Bridge on the Um-Nyankanah, Meghalaya: Supported by massive stone pillars, this megalithic bridge constructed over the Um-Nyankanah river will surely put you in awe. As the legends go, this bridge, along with many other megalithic bridges were built by Jaintia kings during the medieval period to promote trade, communication and move armies. Currently, the bridge is under Archaeological Survey of India’s (ASI) protection.

19. A temple constructed right out of a dream, literally!

Solomon Temple, Mizoram: The Soloman Temple is a famous place mainly frequented by Christians. It was constructed by Sailo from Kohhran Thianghlim when he had a dream regarding this. According to him, he had never thought, saw or imagined it earlier. And that was special about it—he drew the place exactly as it appeared in his dreams and later constructed it.

20. Set yourself on this roller coaster that gives you insights into the life of 16 Naga tribes.

Sun Temple, Konark, Orissa: The temple is a 13 century CE Hindu temple dedicated to Sun God. The temple is constructed in the shape of a giant chariot with 12 wheels. It is a UNESCO World Heritage Site.

Jallianwalan Bagh, Punjab: This popular patriotic historical place in Punjab is a remembrance of the peace disrupted during the colonial rule in India. In 1919, General Dyer open-fired at innocent people, after which thousands of people lost their lives.

23. Feel the extravagance of Amer fort in the land culture, art and literature!

Amer Fort, Rajasthan: Situated in Amber and constructed by Raja Alan Singh Chanda, this Fort leaves anyone spellbound with its magnificent Rajputana Hindu and Mughal Islamic style of architecture. The Diwan-i-Aam and Diwan-i-Khaas, Sheesh Mahal, Jai Mandir, Kesar Kyari garden, etc., can be visited inside the fort.

24. A throne under which treasure is buried.

Coronation Throne of Norbugang, Sikkim: It is the historical location of the crowning ceremony of the first Chogyal king, Phuntsog Namgyal, in 1642. After the ceremony, a wall-like structure named Norbugang Chorten was erected in his memory. One must not miss seeing the seats of 3 lamas, the king's throne, the 300-year-old Fir tree, and the serene Kathok lake.

Vivekananda Rock Memorial, Tamil Nadu: Perched on the small island of Kanyakumari, the memorial offers serenity and peace to the visitors. It is said that here Swami Vivekananda obtained enlightenment. It is also the place where goddess Kumari performed austerity.

26. Catch sight of a mosque that is the heartthrob of a state.

Charminar, Telangana: This was built in the 16th century in the Indo-Islamic style. It is a mosque and is made with granite. It is about 56 metres long, and there are four minarets. One can find multiple shops, food joints and can indulge in flee shopping.

27. Explore the age of Tripura Maharajas by visiting this museum.

Ujjayanta Palace, Agartala, West Tripura: The gleaming white Ujjayanta Palace located in the capital city of Agartala evokes the age of Tripura Maharajas. This Indo-Saracenic building is a museum and the former palace of the Kingdom of Tripura.

28. A place where spirituality meets nature

Badrinath, Uttaranchal: Badrinath temple is located in the Gharwal hill tracks in Chamoli district along the banks of the Alaknanda river. It is at 11000 feet and is one of the most visited heritage monuments - a Char Dham quartets.

29. Visit this epitome of love in Agra.

Taj Mahal, Uttar Pradesh: Emperor Shah Jahan constructed the monument in the loving memory of his wife, Mumtaj Mahal. Considered one of the seven wonders, the Taj Mahal is famous for the layers of love and grief bundled together.

That's all from the list. Remember, this list is an exclusive list of places that are must-visit. Let us know in the comments, if you have any other in mind.