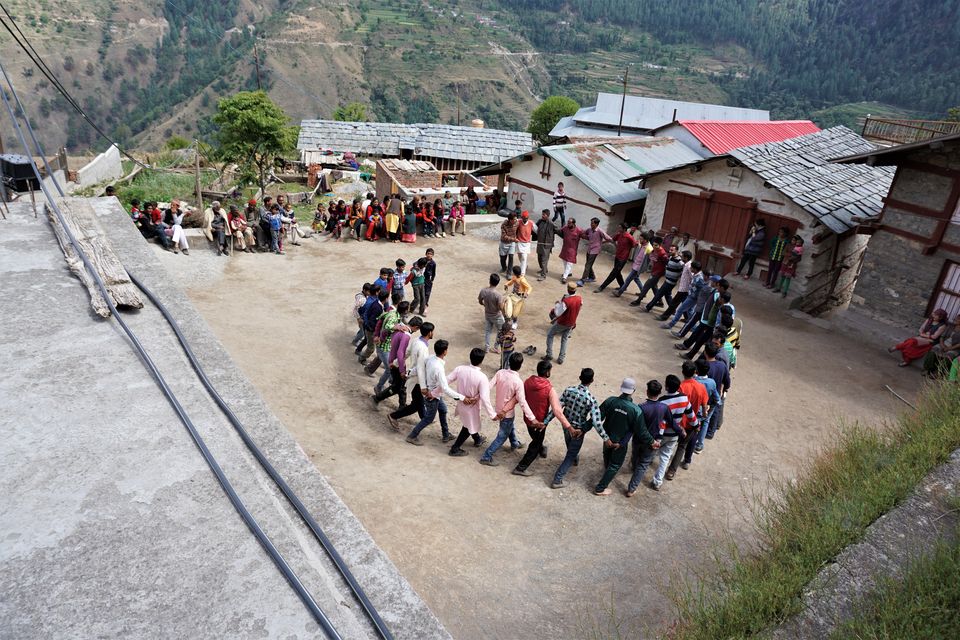 Four to five hours drive from Dehra Dun lies the quaint village of Gorchcha inhabited by a community of people called Jaunsaris who trace their lineage to the Pandavas. According to some scholars the Jaunsaris are a mixed breed from Aryan men who took wives from among the aboriginal tribes of the Himalayas.

The Jaunsaris inhabit the Jaunsar-Bawar pargana of Chakrata tehsil in the district of Dehra Dun and exhibit a culture different from other hill people of the adjoining regions.

Festive sports and dances are an important part of the Jaunsari culture.We visited Gorchha when the Bisu festival was being celebrated. This a spring festival, which used to be a five day festival celebrated in every village. It marks the beginning of solar year and the harvest of rabbi crops. Lord Mahasu and Silgur, the god of sheep is worshiped on this day.

The morning begins with the bajgi (the so called mid-level caste of artisans and musicians) announcing the commencement of the festivities with the beating of the drum. Young men and boys of the village go to the forests to collect the beautiful red buras flowers (Rhododendron) to place it as an offering to Lord Mahasu at the village temple.

This festive procession then slowly makes its way to an open courtyard/chaupal at the entrance of the village where the village women are already waiting adorned in their beautiful traditional attire of dhantu (head scarf), ghaghra (long skirt) and jagaa (short tunic) and kurti (jacket).

Then begins the harul dance. The more enthusiastic children and teenagers initiate the dance followed by adult men and women.

As the evening progresses the menfolk prepare for a mock archery contest. This has its basis in the legend of Maroj, a rakshas/ogre who used to traumatize the villagers in ancient times. Men dress up in Suthan (padded pajamas made from goat hair) play act the role of Maroj, while others shoot at their legs with bow and wooden arrows.

The contest is followed by a sword dance by the men who put on their traditional dress of Juda (long coat), Digua (cap) The singing and dancing along with the beating of Dhol, Dholki and the blowing of the traditional horn - Ransheengha goes on till sunset.

Gorchha is 70 kms from Dehra Dun and 400 kms from New Delhi.

We took the Nanda Devi overnight train from Delhi to Dehardun.

Alternately you could hire a cab from Dehradun to Gorchha which could cost you anywhere between 5000 to 6000 rupees.

You can see Kanasar and Tiger Falls on the way to Gorchha or on your return trip. We visited them on our return trip from Gorchha to Dehra Dun.

Gorchcha is known for the freezing temperatures during winters and pleasant climate during summers.

Monsoon (July to September) is associated with medium rainfall. This season is characterized by slippery roads and cold winds. Tourists mostly avoid the rainy days.

Winters (December to February) are chilly. During this season, the maximum temperature is below 15 °C and minimum touches -5 °C; it is freezing cold.

March to May is the ideal season for outdoor activities. However If the snow fall is good, it is worth experiencing the winter in Gorchha! The month of April is a month of thunder storms, that was when we visited and it was quite beautiful !!

Shri Tikam Singh who runs a homestay at Gorchha village can be contacted through his facebook page:

Gorchha I- Overview: A little known Gem in the Himalayas (check this post for itinerary details)

Gorchha V: The Birds and Flowers

SPONSORED
Want to book a similar trip?
I accept the Terms of Use and Privacy Policy of Tripoto.
SPONSORED
Related to this article
Weekend Getaways from Gorchha,Places to Stay in Gorchha,Places to Visit in Gorchha,Things to Do in Gorchha,Gorchha Travel Guide,
Tagged:
#bisu festival#jaunsari culture#gorchha#uttrakhand#himalayan people#culture tourism#video