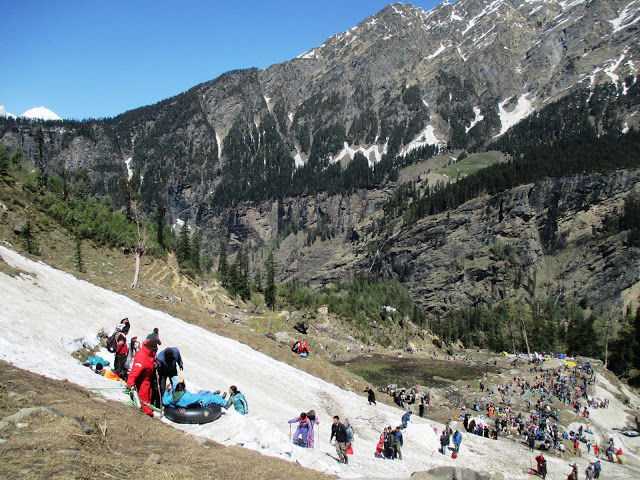 Although the Manali city is Himalayas, the famous Rohtang Pass is the main center of attraction of tourists due to its snowfall throughout the year. Due to the snow in this snowy valley throughout the year, it is only possible to go from the second week of the month to the month of November in the summer season. For the rest of the day, Gulba valley is kept as an alternative to Rohtang Pass. Due to the height of the height, this place can always be visited and the snow can be raised along with it. With the hope of going to the early days of May, Rohtang got close with the hope, so Gulab got involved in our Destination. Now if Rohtang can not go, what can you say about it, but Gulba did not even disappoint. I was so impressed by the fact that if there is a paradise on earth, then it is here. In fact, the experience of viewing snow clad mountains so closely is unique.

The snow covered these instruments are called repeatedly.

An introduction to Gulaba- This place is called Gulab in the name of King Gulab Singh of Jammu Kashmir. When Rohtang is closed due to snowfall, situated twenty kilometers away from Manali, Gulaba does not let the tourists go back, but rather with a lot of prized memories, who can not afford to go to Rohtang to a large extent Reduces

Let's go now to the travel history. Due to excessive fatigue, sleep once and then late in the morning. We had to go to Gulaba Snow Point, which was not too far from Manali, so we got out of the hotel after breakfast. At this time the peace of Mall Road was worth seeing, almost all the shops were closed and the tourists were also missing. Just one ace, the carts were visible. On the exit from the Mall Road, the Vyas River appeared, which continued all the way.

Vyas River, you stay with me.

These empty roads and a loving warning, do not drive fast.

We were moving forward on Manali Leigh Highway, going a little further, there was a grand glimpse of the wonderful Himalayan range. Enjoying these pleasant scenes, we reached the masking. The path in the pulpping divides into two parts, towards the Sholang Valley side and the other towards the Rohtang Pass in Manali Leh Highway. There was a program to go back to the Sholong Valley, so we proceeded on the highway.

If there is such a place in your house then you will enjoy it.

There were also some hot clothes and shoe shops in the snow. The shops here are known by number instead of the name. We also took some things from a shop and went ahead. The Himalayas were getting closer as they were moving. Like a snake, the turning curve was ever seen in the giant mountains, and sometimes the deep trenches. Many small waterfalls were also seen in place on the way, but due to the early arrival of Gulab, we have not stopped anywhere. After seeing the huge Himalayan range we finally reached Gulaba. Now, through the trails, we had to go to the place where skiing and other activities were taking place. There were also many mulewomen sitting here that take them to that place. Gradually, we also reached that height, where even in May there was an ice empire. Truly a very amazing scene. To see these natural scenes comfortably, we sat down on a rock stone on the same day.