Jordan Travel GuideJordan TripsMesmerising Jordan: A Must Do Trip To Heaven And Back

Mesmerising Jordan: A Must Do trip to Heaven and Back

It would be very easy for one to start this travelogue by saying “Jordan needs no introduction. It is a land of historical significance, natural beauty and warm hospitality”. While highly apt descriptors of the country, these words don’t even begin to explain the deep sense of magic, adventure and being one with Mother Earth that we felt as soon as we landed in Amman. Jordan has historic connections with many ancient civilizations like the Sumerians, Babylonians, Persians, Mesopotamians, Akkadians, Greeks, Nabateans, Romans, and Crusaders and hence it often just feels like your connection with the past, the centre point of Humanity and the messenger with answers to the deepest mysteries of life. After all, it is a Time Machine, inhabited by mankind since the Palaeolithic period.

Honestly though, my reasons to start planning to visit Jordan were singularly driven by Harrison Ford’s Indiana Jones and his Last Crusade. I was awed when I watched the movie & it quickly became one of my favourites. I remained awed till I finally pushed myself to head out to one of the 7 Wonders of the World - Petra!

But Jordan is so much more than that one image in my head and that proved true with all the adventuring we did around in this wondrous country. And while it is possible to go on waxing poetic about Jordan, I would rather share the top 5 things one MUST DO while exploring this mystical place.

When I first heard of the Dead Sea many years back, I didn’t believe that such a place exists. The initial few pictures of the place simply looked unreal to me. But while planning the trip to Jordan, I realised that this ethereal place was within my grasp too and it soon became a must-do in my itinerary. We stayed at the Holiday Inn resort and spent most of our time peacefully floating in the Dead Sea or slathering our skins with the deliciously good mineral mud which is supposed to have spa like therapeutic properties. Ours skins were much softer by the time we left the Dead Sea area!

The highly salty mineral content of the water let even the most aquaphobic of us have a good time floating around with zero effort and we wasted no time posing for the cameras with the silliest antics and the most gorgeous sunsets! Just be mindful of not letting any salt water in your eyes and making sure any cuts / bruises are covered because the dense salt in the water burns!

The Jordanians also use the Dead sea mud in a huge variety of bath and beauty products and we couldn’t help stuffing our suitcases with loads of the same! And believe me, they do work wonders, we know!

Gorgeous Sunsets at the Dead Sea 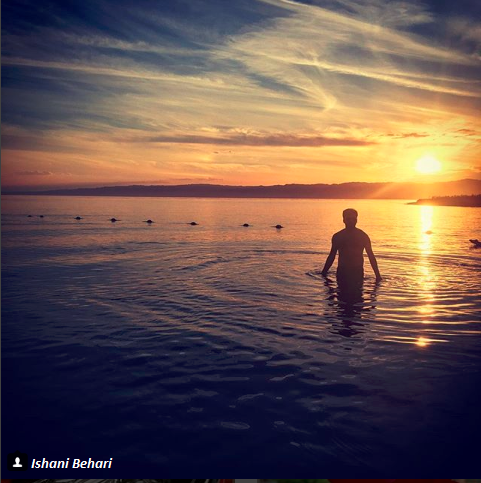 2. Adventure in the Wadi Rum desert

Reaching the Wadi Rum valley & desert felt like we’d left Earth and arrived in surreal alien land. One of the simplest experiences of my life turned out to be the most adventurous and one that I will remember the most.

The desert’s dramatic landscape thanks to the giant sandstone and granite rock mountains interspersed with red sands made us feel that we were Indiana Jones or Lawrence of Arabia ourselves - travelling the unknown, exploring new places and making discoveries for the benefit of humankind!

We took a 4X4 jeep ride into the interior of the desert where we drove past and bounced around sandstone mountains, imposing stone facades, sand dunes, and moon-like panoramas. Our sweet driver and guide showed us the places where famous movies like Lawrence of Arabia and The Martian were shot (no surprises there, considering the landscape!) and even the ancient Nabatean rock carvings & petroglyphs illustrating 12000 years of Wadi Rum living!

We stayed at a local Bedouin campsite, nothing short of luxurious though with all the modern fittings, central heating, ensuite bathrooms and sunrise views. Our experience was made complete with the traditional dinner of the local Bedouins called Zaarb where they BBQ meats, vegetables and rice by burying it all in the sand and slow cooking it for many hours. The Bedouins were cheerful, friendly and happy to dance and sing with us around the evening campfire under the clear starry skies.

Transport at the Wadi Rum 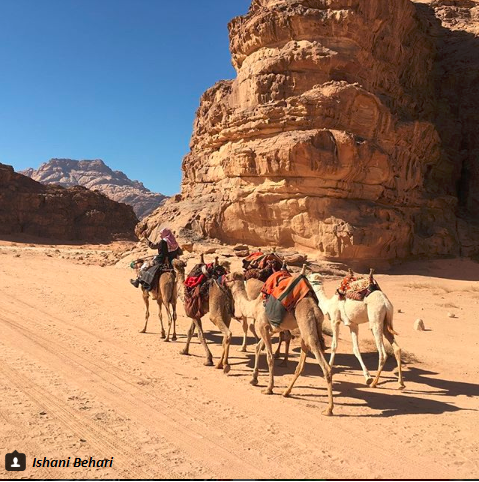 A big part of the Jordanian experience is sampling the local food. While often similar to its Middle Eastern counterparts, there is a delectable uniqueness all its own in Jordanian cuisine. Apart from the must have exceptional fare like Hummus, Baba Ganoush, Falafel, flavoured olives, local cheeses, Kebabs, stuffed vine leaves and Tabbouleh, we also tried Mansaf (a communal dish of lamb meat with rice, almonds and a yoghurt sauce called Jameed - often dubbed the “national dish” of Jordan!) and Shawarmas, Turkish Baklavas, Arabic Kaek, Ful (which is a breakfast dish), Makloubeh (a traditional upside down rice dish) and what not. We drank the freshest of fresh fruit juices, delicious herbal teas and my favourite traditional cold lemon mint drinks whenever we could!

Of course, the icing on the cake was the special Bedouin Zaarb experience mentioned above, but the Mansaf would remain christened my favourite dish!

Don’t forget to pick up some local spices like Za'atar & Sumac to take a bit of Jordan back with you. These work to add a magnificent new dimension of flavour to any of your dishes at home.

The Jordanians are wonderful hosts and love telling guests about their foods, their eating traditions and can often spend hours around the meal table with their communal dishes, swapping stories, explaining traditions, and enjoying their meals. Oh yes, the pants definitely felt tighter after this trip!

Apart from a rich Arab / Middle Eastern cultural heritage, Jordan has a deep connection with Christianity as well. Even now, there is a strong indigenous Christian population. According to the Book of Exodus, Moses he led his Israelite people, freeing them from slavery across what is modern-day Jordan, onwards to the Promised Land. We followed the trail of Moses as he reached Mount Nebo, an elevated ridge, claimed to be the place from where Moses first sighted this Promised Land. There is a small museum at the top of the hill, and the remains of an ancient Byzantine church, along with beautiful panoramas of the said Promised Land.

We also drove to Madaba, a small town best known for the remains of an old mosaic map, showcasing 6th century Jerusalem and other parts of the Holy Land. Madaba city has taken up this mosaic art and technique and keeps it alive with beautiful mosaic murals, furniture, decorative items and small tourist tokens that are often showcased in government run exhibitions and stores.

Another important pilgrimage venue is Bethany-Beyond-the-Jordan, a holy site at the Jordan-Israel border, which is supposed to be the Baptismal spot of Jesus Christ. It is hard not be moved by the serene atmosphere of this place, simple as it is, irrespective of your religious inclinations and I left feeling blessed.

There are many other holy places that can be visited that have cultural and historical significance to the Christian faith such as the Moses’ spring - the place where Moses is said to have struck his staff in the desert to bring forth water for his thirsty followers, or the Tomb of Aaron, near Petra, where Moses’ brother is said to be buried atop a hill.

5. Marvel at the Magnificence of Petra

We drove up the Kings Highway to Petra, an ancient roadway, nestled between 2 modern North to South highways of Jordan, meandering through scenic vistas, tiny villages and mountainous roads dotted with numerous small ruins & sites.

And finally, Petra…. Sigh! What can I say about Petra that hasn’t already been said before? The other-worldly rose city, the lost city, the fabled ancient Nabatean city in the middle of the Wadi Musa, the city of breath-taking grandeur and legendary ruins, carved right out of immense Sandstone rock walls… Petra!

We kept the best for the last and the anticipation building as we finally reached Petra had become almost unbearable. We were at the gates of Petra very early in the morning, in a bid to avoid both the large crowds and the sunny heat and were rewarded by a peaceful, often alone, awe-struck walk through the Siq (literally translates to The Shaft). The Siq is the tall & narrow gorge of weather worn carved sandstone, which acts as a passage that leads to Al Khazneh (The Treasury) in Petra.

The Siq (literally translates to The Shaft) 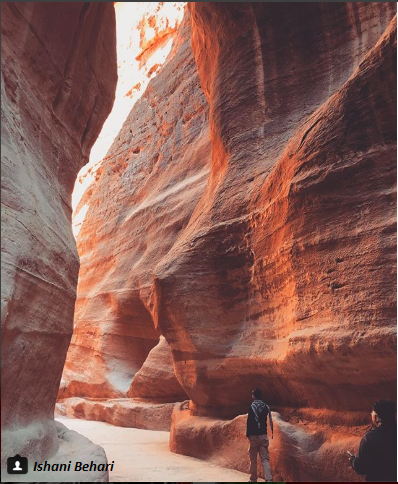 Once at The Treasury, many pictures later, we moved forward and saw the Street of Facades, the Roman Theatre, the Royal Tombs and many more marvels. And when we couldn’t walk anymore, we hired donkeys to take us up the 800+ steps to The Monastery. Each spot to see inside the walls of Petra was jaw dropping in scale, beauty and magnificence. We spent many hours just walking around, absorbing the astonishing architecture.

Al Khazneh (The Treasury) at Petra 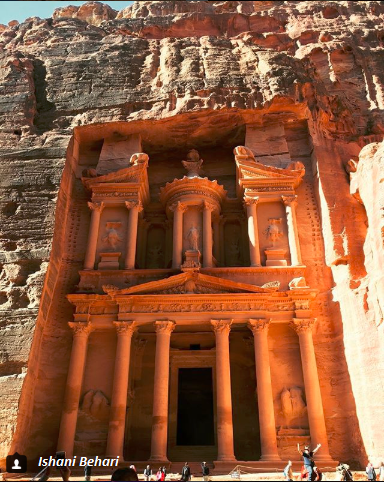 When the sun got too high, we took a bit of a break at a small Bedouin run open café where the owner came to chat with us and we spoke of India, Jordan, travelling and Bedouin history.

We came back for the Petra by Night tour where the path through the Siq all the way to the Treasury was lit by thousands of paper candles in the sand. Everyone was quiet, absorbing the unnaturally exquisite beauty of the place. The dim orange light of the candles cast a spectral glow on the pink sandstone. As we all settled down in front of The Treasury, we were entertained by the local Bedouin tribe that lives and works there as they played their traditional musical instruments like the Oud and the Rebab and sang some haunting melodies. We all left in silence too, unable to quite process the bewitching experience we had just had.

The bewitching experience of Petra by Night 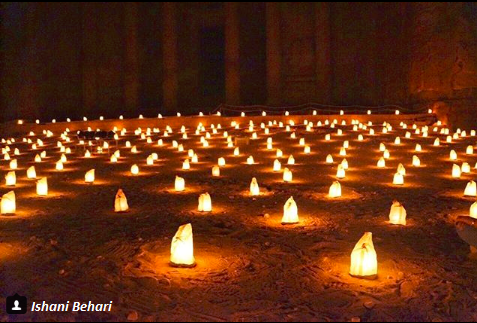 Petra was everything and more that we had expected and hoped it would be. No wonder it has been declared a ‘World heritage Site’ by UNESCO and of course it is one of the ‘7 Wonders of the World’. A truly magnificent experience - one that will remain etched in our memories forever!

According to Wikipedia, Jordan has been repeatedly referred to as an "oasis of stability" in a turbulent region. It is spectacular, safe and secure full of warm and hospitable people. It is a magical combination of highly varied natural and historic beauty unlike most countries around the globe. I would recommend visiting Jordan and exploring its treasures with an open mind and an open heart.

SPONSORED
Want to book a similar trip?
I accept the Terms of Use and Privacy Policy of Tripoto.
SPONSORED
Related to this article
Places to Visit in Jordan,Places to Stay in Jordan,Things to Do in Jordan,Jordan Travel Guide,
Tagged:
#Jordan#لواء قصبة العقبة#محافظة العقبة