Cerro Chato Trail - through the jungle 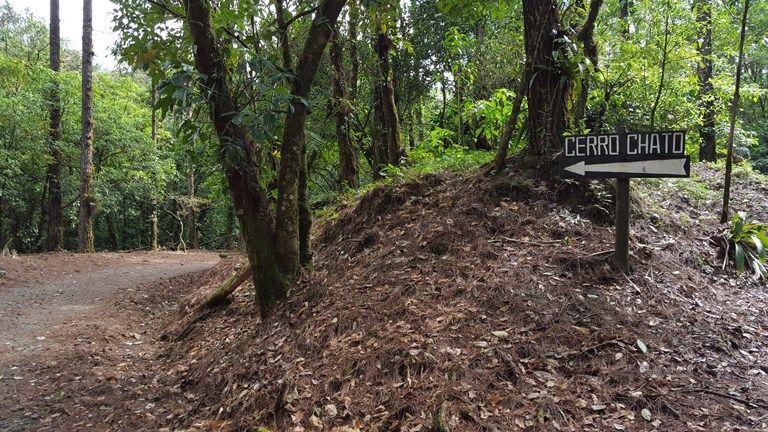 Today's post is dedicated to lovers of outdoor activities and real connoisseurs of wildlife because both will be here. The action is still happening in Costa Rica in the vicinity of the Arenal volcano. In the courtyard is January, warm and even hot sunny weather, and we make our way to the crater of the long-dead volcano Cerro Chato...

The background was described in one of the past posts about Costa Rica, when I told about the visit to Arenal observatory, where starts the trail to the top of the volcano Cerro Chato. Somewhere a couple of minutes before entering the territory of Arenal observatory there is another entrance to the path, sort of as free, and therefore "unofficial". We climbed the path leading from the Arenal observatory, so we'll go further only about it - what's going on on the second route, I can only guess.

So, the card received at the entrance informed us the following information: "up to the top of Cerro Chato 1540 meters", like a very little bit, "but climbing will have to be strictly upward," added the park employee, "so put the entire route for 4 hours" and advised We need to bring more water and a snack. Having passed such a simple briefing, we packed everything in the backpack and went to the top of the trail, looking on the way to other natural attractions marked on the map.

Immediately, from the start it became clear that I still have to climb all the time - I will not say that this is a special feat, but I have to have some physical training, I would not get there with my parents. Although there were daredevils, balancing on the roots of trees with babies in backpacks, we strongly advised them not to do all the way with such a composition; it will be further understood why.

In general, the route was quite popular, and every 15-20 minutes we overtook someone, or someone overtook us or met with those who went down. Hundreds of human feet trampled among the roots and forest soil peculiar steps, from which the route became at least somehow passable. But in rainy weather or even after yesterday's rain, I would not have climbed here for any gingerbread: I can already imagine how my feet sink into the washed clay, sometimes on my knees, I cling to the roots and trees, without even trying to remove the dirt off my face.

There is a certain charm in it - it's enjoyable to climb among the overgrown trees in dry weather. After all, around the real jungle - a virgin forest in all its glory.

The logical conclusion of the hour-long climbing is the top of the volcano, in the crater of which is located the lake of the same name, traditionally called the Lagoon. The lake can be seen with just a few holes in the forest, and the nearby Arenal volcano is completely hidden behind the dense thickets.

Now, before each traveler, there are two options - turn back or go down to the lake. Guess what we chose.

The descent to the lake, and then the ascent, was even more extreme than all that had been taken together because the angle of inclination here was completely different, and there were no equipped staircases, and then they did not appear.

But nothing, we are not the first, we coped well here. And as a presentation for our services to hiking, we were awarded a dinner on a surprisingly comfortable log, located right in the lake. The next time to us came the realization that it is for such moments that we always set out on a journey, leaving a comfortable home and spending a decent portion of our modest income.

Conversely, it was so hard to get to the top of the slope.

PS: I will not give any recommendations about this route. I think everyone understood for himself whether he liked this kind of rest. We were satisfied, but to turn every day of travel into such an intensive walk, of course, would not.