Costa Rica : This is Pura Vida.

Pura Vida. I had no idea about this phrase until the moment I boarded my flight to San Jose, Costa Rica and the deeply rooted cultural meaning behind these two simple words that were key to happiness and a fulfilling life that we all long for. So what does this actually mean? Surely it has a better ring to it than Hakuna Matata or Carpe Diem. But moving on from pop culture references and Old Latin citations, the literal Spanish meaning translates to " Pure Life ". But there's more to it.

So, I found myself 15000 kms from home, enrolled into a study abroad program in Costa Rica doing a semester abroad in advanced Spanish and kicking off another adventure that would probably elevate my passion for travel to another level. 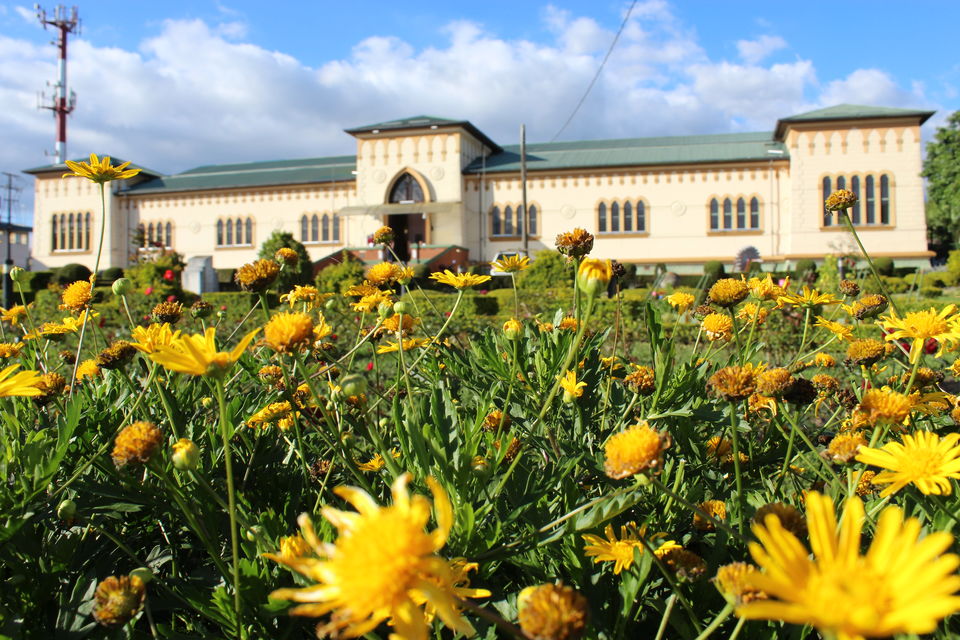 Costa Rica as a travel destination is a relatively unknown quantity for Indians. So, before heading over I had a lot of anxiety and curiosity as to how this extended period of stay with a local family as a foreign exchange student/traveler would work out. But as it turned out, I came out on the other side as a completely transformed yet more mature version of myself who had far more sympathy, gratitude, love, courage, compassion and understanding of and for the world that we live in. Sometimes I introspect on the time spent in Costa Rica and I wonder what led me towards living or at least trying to live a " pura vida "? 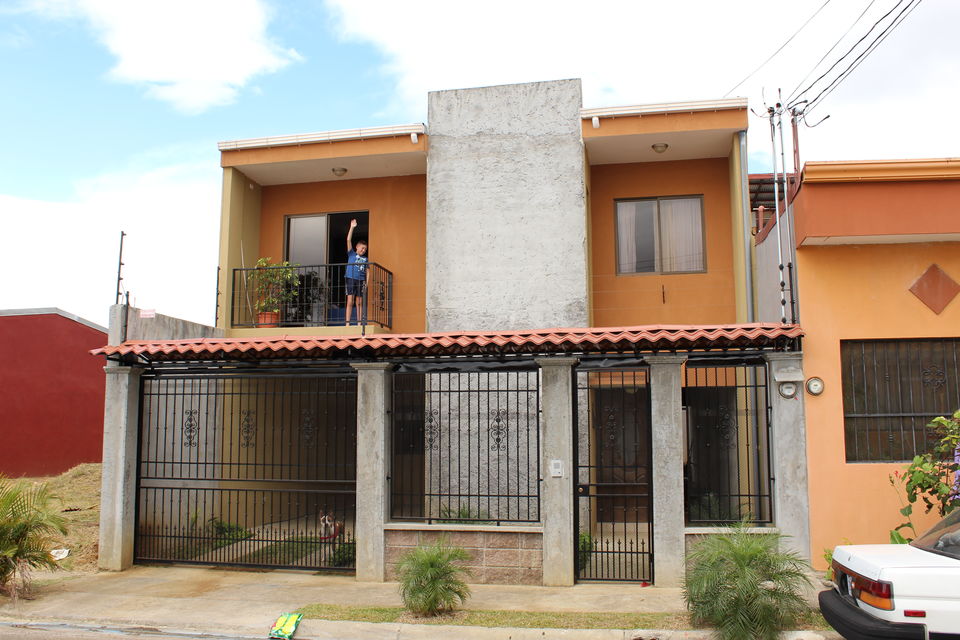 Could it have been that Pura Vida meant being welcoming with open arms to a stranger from a distant land with a cultural difference of the size of The Milky Way? To be able to get completely immersed in the fabric of the modern 21st century Costa Rican society which ironically still has it's roots firmly in the colonial era and how far they've come from being merely a Spanish colony to being the most ecological and environmentally friendly country in the world. Very rarely would you find a place where the love and affection for humanity is equal to the fierce and unending patriotism and love for the motherland. In 4 months how a bunch of strangers became my family away from home is something that I often find hard to explain to my people back home. It was an experience unlike the many trivial yet pleasant experiences I've had before while traveling. It is a lovely feeling to be hosted by graceful people who not only house you but also welcome you into their daily lives and make you the part of their each and every dinner table conversation which gives you a feeling of acceptance and inclusion as a member of la familia. We hear this quote thrown around a lot these days - be a traveler, not a tourist. Ticos (more commonly used term for people from Costa Rica) believe in being compadres rather than just hosts. 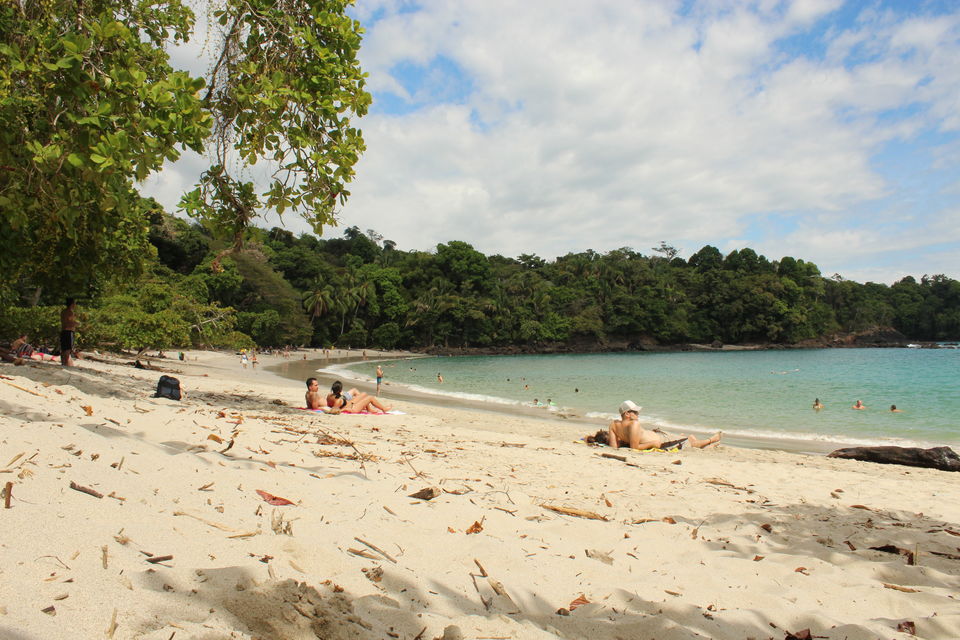 Pristine, clear and celestial beaches await you in Manuel Antonio National Park. The park, which is famous for its Capuchin monkeys, sloths and spiny-tailed iguanas, has a large land and marine biodiversity with beautiful coral reefs. Apart from being richly diverse in flora and fauna, Manuel Antonio is the most visited national park in Central America making it a hot spot for surfers, swimmers, birders and ecotourists. 132 km due west from the national capital of San Jose, Manuel Antonio National Park has an uncanny habit of astounding it's visitors with it's scenic beauty, lush foliage and immaculate white sand beaches which certainly give you a nice sweet chunk of the Pura Vida which you so vehemently desire and crave for.

Taste the Caribbean in Limon 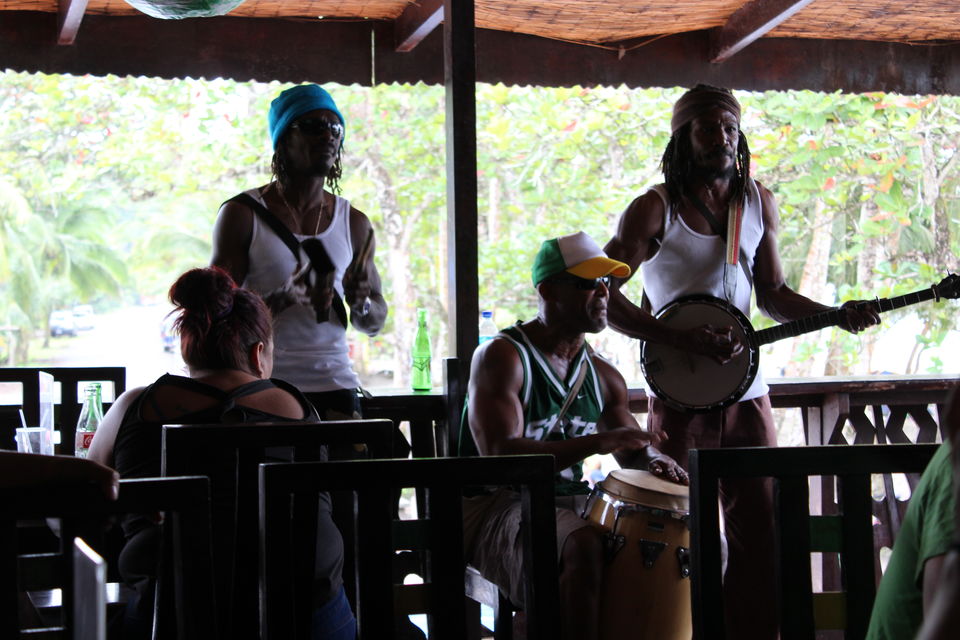 Rhythmic, laid-back, vibrant, relaxed, jubilant..a few adjectives that straightaway come to your mind when you think of the Caribbean Calypso culture. It's hard not to notice the roots of Rastafarian movement which initially started in 1930s spread out to Limon - the Eastern coastal Province of Costa Rica. Limon, also is home to the biggest indigenous tribe still surviving in Costa Rica, known as the Bribri tribe to whom the access is still very unrestricted for all the historic enthusiasts. Known for its reggae (of course), turtles, black sand beaches and a festival held in mid-October called Carnaval. This festival surely resonates the spirit of Pura Vida which reverberates in every Coconut Tree, Reggae beat and grain of rice across the lively Coastal Province of Limon. 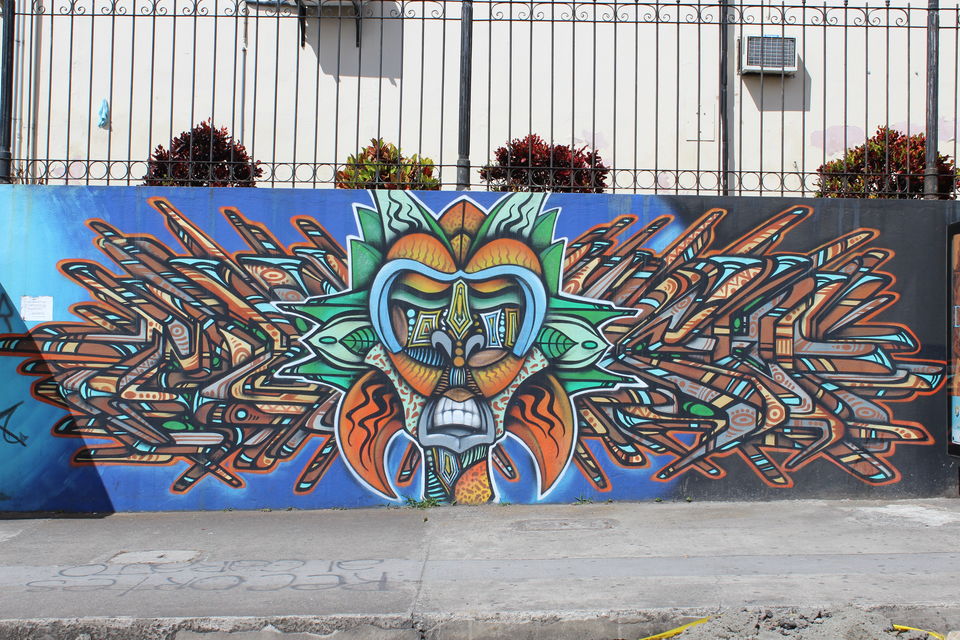 Could the ability to express oneself from the heart be something that we look in our very own Pura Vida? One of the key things that define and a city is the ability of it's common people to express themselves via art. Often street art which gets looked down upon as vandalism is a beautiful texture of a city that gives it a unique identity. Walking around the streets of San Jose it is almost impossible overlook the effervescent and hard hitting graffiti that leaves you in awe and admiration of art with a purpose of sending a message out in the open. With every graffiti telling a story of it's own, it feels like flipping over stories in a magazine that would give you plenty of food for thought.

We all love Sloths! 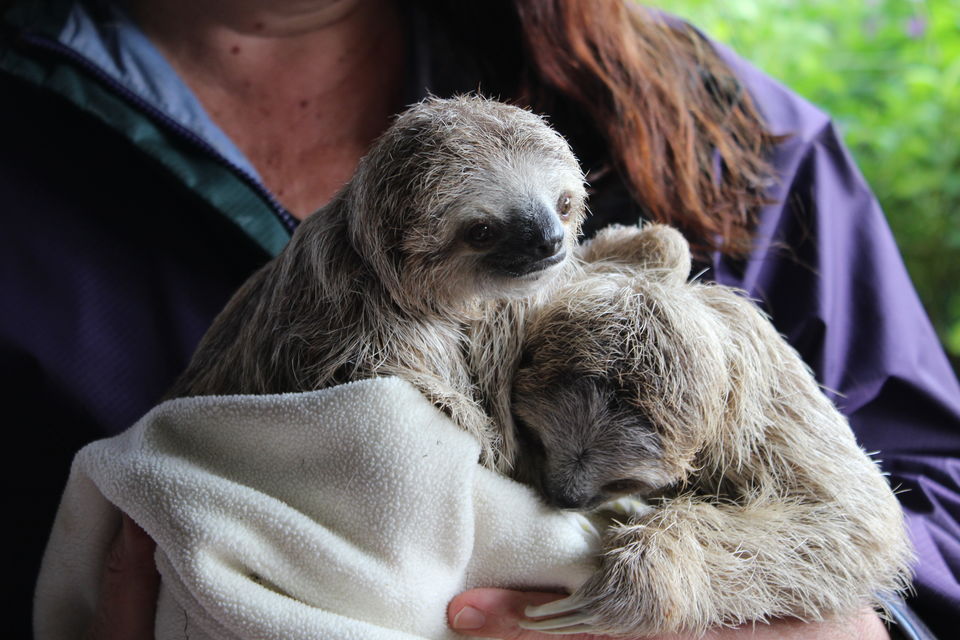 Don't we all love sloths? Then how about playing with two baby sloths with her mother overlooking from her tree-branch. Sloths, unofficially, are THE national animal of Costa Rica. One of the most adored creatures on the planet known for their excessively laid back demeanor and ' not-giving-a-damn-to-the-world attitude ', these annoyingly cute buggers can bring a smile onto anyone's face be it on YouTube or in person. Costa Rica has always been lauded for it's wildlife preservation and bio-diversity. Across this country you will many safe havens for endangered and injured animals who've lost their way in the wildlife and need some extra care and supervision. This specific wildlife sanctuary, one of the biggest, called the Toucan Rescue Ranch in the city of Alajuela shelters a wide variety of animals with their prime attraction for tourists being Sloths, Toucans and Coatees is a must visit for all wildlife lovers.

Do The Superman in Monte Verde! 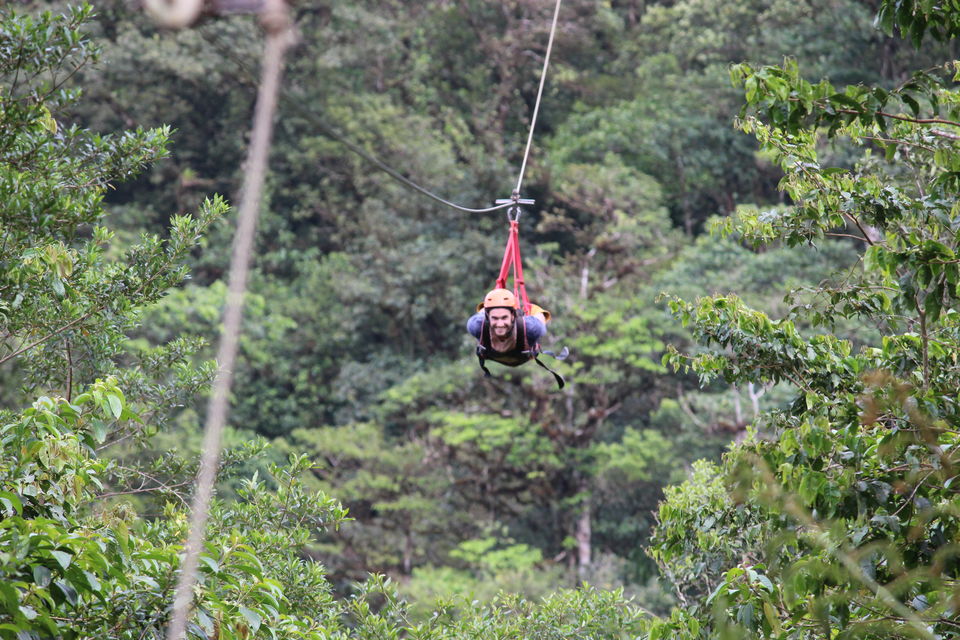 One for the thrill-seekers. Adventure is all around you, just gotta hear it's calling. If it's zip-lining you wanna do then rarely will you ever find a better place than Monteverde. As you zip past the cloud forest circuit of Monteverde, the pure beauty and the thrill of flying across from one mountain to another surely gives you a feel of what the gods from Krypton feel and experience.  One of the most important eco tourism destinations of the world, Monteverde is a small community in the province of Puntarenas in North-Western Costa Rica. Arguably the main attraction of Monteverde, the massive 26,000-acre Monteverde Cloud Forest Reserve draws thousands of tourists every year. This area hosts 91 migratory birds, 58 species of amphibians and 134 species of mammals. 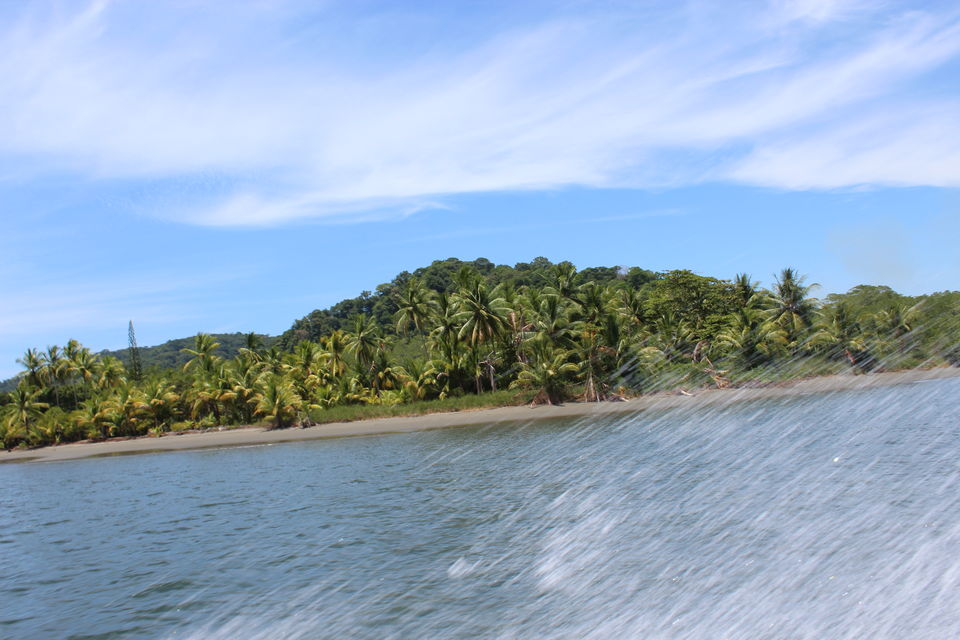 Corcovado National Park has the honor of being named as the most bio-diverse park in the world. Naturally, with this honor comes huge number of restrictions. Although 75% of the core area is off-limits to tourists, even the remaining parts of the park provide us a key view of how dense and rich a forest can ever be. The park has three entry points, and reaching the park itself makes you realize how much efforts have gone in to make the area isolated from human development. The best route I found to go was to speed boat from the town of Sierpe which happens to be a further 5 hours from San Jose, downstream the River Sierpe, maneuvering through the rain forests which are famous for it's snakes heading out into the Pacific Ocean and then touching base after a thrilling 2 hour boat ride to San Pedrillo Station. Surely, I had no idea that THIS journey would be as good as the destination. 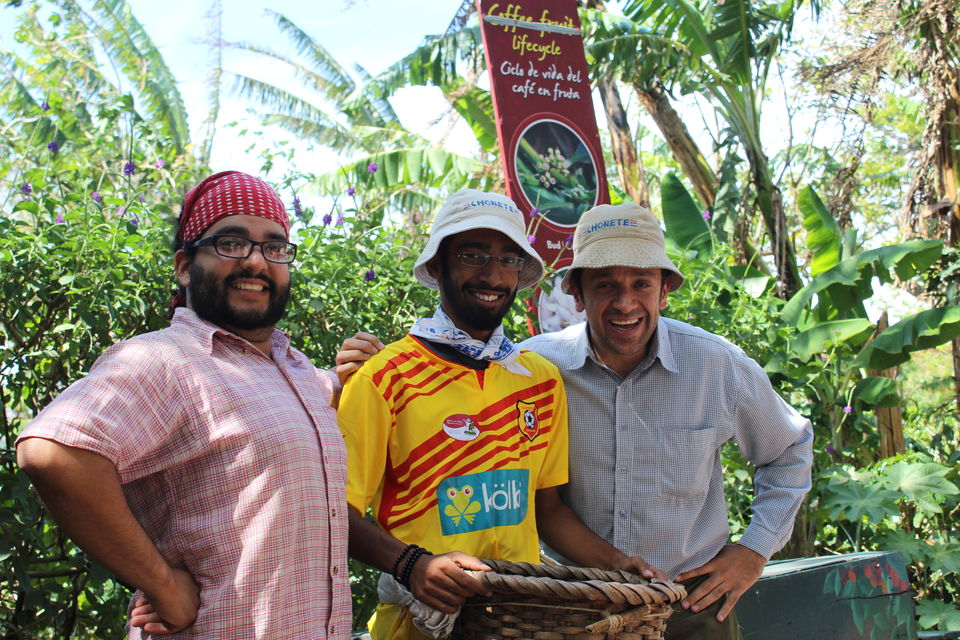 One thing you're sure to find in abundance in this country is Coffee. With songs being written, ceremonies being performed, coffee when consumed in Costa Rica surely gives you the feeling of it being God's gift to mankind. Could Pura Vida be all about that rich and enigmatic aroma of fresh coffee in the morning to get you going in the day? The strong, smooth yet pungent smell of coffee beans that activate your brain the moment you breathe in the elixir of the gods. Being one of the finest coffee producers of the world, Ticos (Costa Rican people) feel an innate sense of pride in admitting to the fact that the production of coffee is what made Costa Rica into this impressive economy dating back to the mid 19th century. Almost every city has their coffee plantation tour which was personally one of my favorites wherein the visitors get a chance to pick coffee from the gardens, learn about it's history, see how it's made and last but not the least, to taste every variety of it that Costa Rica has to offer. 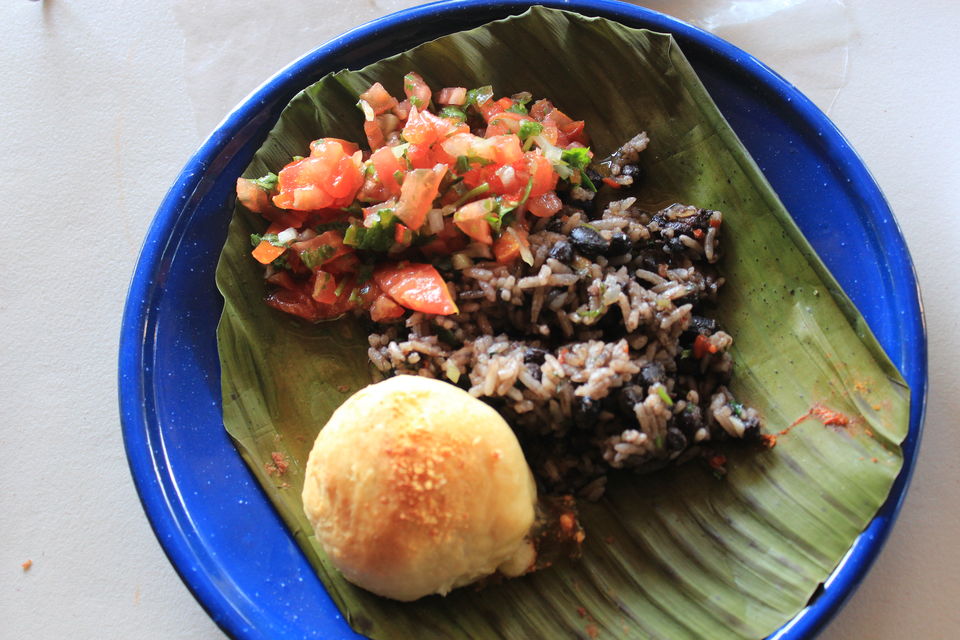 The staple diet of Costa Rica is Rice and Beans more commonly known as Gallo Pinto. As simple as the ingredients that make part of this hit recipe, according to me, the more difficult it is to get it right and to create a perfect batch of Gallo Pinto. I tasted Pinto from possibly 10-15 locations in Costa Rica, but surprisingly I found the best one cooked by my host family mother. To her very own admission, she thinks that most people miss one very key ingredient in this recipe - which is love. Traditional Ticos believe that food prepared with care and love has it's very own taste to savor and relish. Pura Vida according to her, was how she put in love and affection into her everyday tasks such as cooking, cleaning, knitting and even office work which she believes is a key to attaining happiness and satisfaction with the grace of god. Surely, for a person who'd put so much thought in her food would a be an amazing cook. 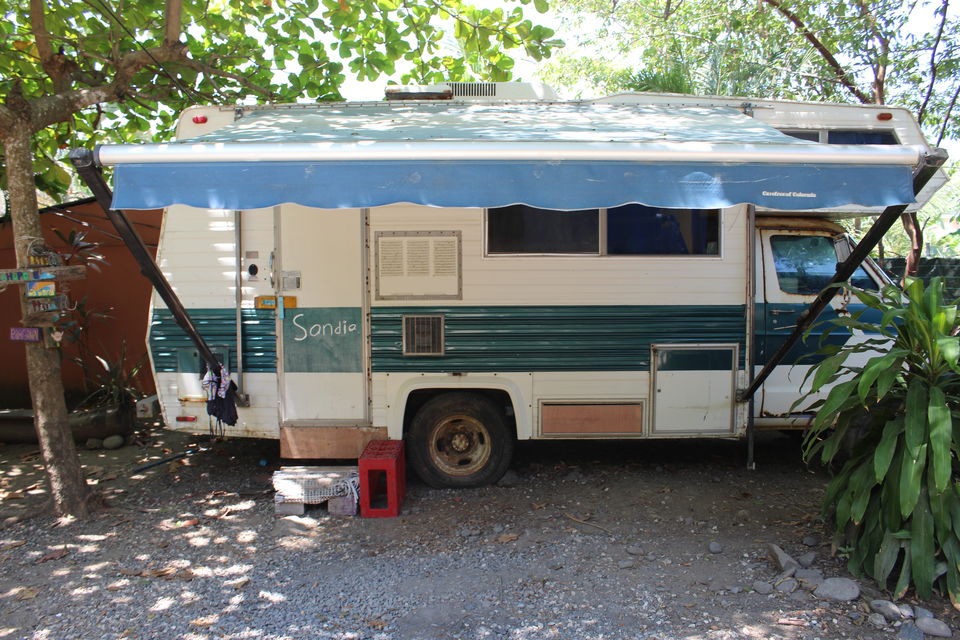 Excuse the pun, but clearly one of my main reasons to go to this hostel in the sleepy surf town on the western coast called Santa Teresa was the fact that this specific hostel called Kokua Hostel offered to rent an RV to live in for it's guests. And to add to this, they had all-you-can-eat pizza nights once every 3 days in an outdoor kitchen for $5 USD which certainly caught my attention. Me and a few friends of mine rented this RV for a week on the Easter Break to live in. One big portion of the tourism in Costa Rica are backpackers, and all of them love staying in hostel communities which provide them with an affordable and cheap accommodation and a community kitchen to work with. Surely for solo travelers, hostels are the best place to meet people from all around the world. And over these 4 months in Costa Rica traveling and staying in all kinds of beautiful hostels, I've made so many friends along the way that I can definitively say that hostels are my favorite type of accommodation. 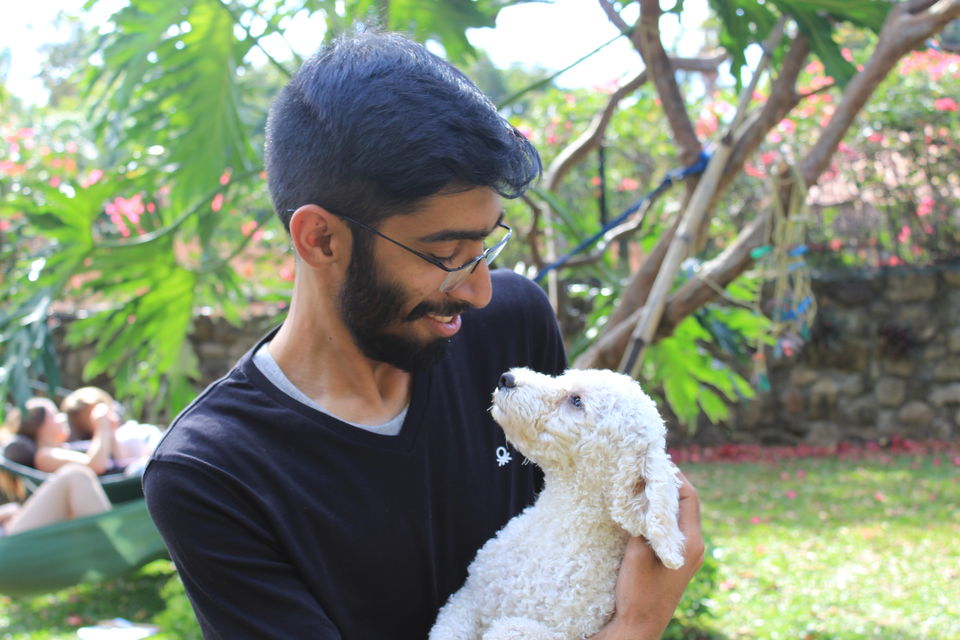 I met hundreds of people in Costa Rica. For some Pura Vida was an expression of love, for some it was a greeting, for some it was a way of life, for some it was all of the above, But for me, Pura Vida is not just a phrase, it's a feel good factor. It's feeling loved, it's that feeling of finding home away from home, it's the ability to bring a smile on someone's face, it's not only thinking outside the box but living outside, it's the will to help make other lives better, it's the grace with which we thank the creator for this wonderful life and it's the passion and fire to travel that never dies. Pura Vida.