The Atal Tunnel. You would surely have heard of it a lot since 2020 - not only through travellers, but also in the news, as this route experienced record-breaking numbers thronging to get a glimpse of what this architectural marvel is and the wonderland Spiti that lies beyond it.

To those of you who have only heard of the tunnel but don't really know what the hype is:

Prior to the Tunnel, Spiti was cut-off from the world for 6 months during winter due to the insane amounts of snow the region receives. The route from Manali to Spiti involved going through the Rohtang Pass (or Rohtang La) which only opened for a few months in a year, making this trip almost impossible during winters. But now, with the tunnel, Manali is connected almost year-round (barring heavy snowfall durations) to the Spiti region and the travel time has reduced from 6 odd hours (at the least, as Rohtang was often very crowded and it resulted in traffic jams) - to a mere 30-40 minutes from the town centre! This means, the Spiti and Leh-Ladakh regions are now more accessible than ever, and all kinds of travelers, not just the adventure seeking, camping types, can experience the beauty of this region.

Another, more crucial function of this tunnel is to help India defend its northern borders, especially now that the Chinese infiltration has been increasing over the last couple of years. By making these otherwise inaccessible regions more accessible, India will now be able to mobilize defence forces more easily than before.

How to get to the Atal Tunnel from Manali

To get to the Atal Tunnel, the best way is to hire a cab or bike from the town of Manali and drive to the location. A few reliable cab services are offered by Savaari.com. I have personally experienced them and can testify for the quality. For bike rentals, Tiger Eye Adventure are good, reliable providers - again, personally tested. If you're traveling by bike, be sure to carry and wear the right gear, as evenings tend to get especially chilly, even if the days are warm and sunny.

One thing to bear in mind is that the tunnel closes by 3PM on most days, so be sure to plan your trip accordingly. You will still be allowed to return back later, but to travel towards Spiti, you need to make it through before 3PM. An early start is beneficial as on a clear day, the sun may be too strong and can result in sunburns/sunstroke or heat exhaustion.

Solang valley, another tourist attraction, is on the way from Manali to Atal Tunnel

The route to Atal Tunnel goes via the Solang valley area. Solang valley boasts of quite a few fun activities for those of you seeking the adrenaline rush. It offers paragliding and cable car services almost round the year, and in the winter months when it snows - you can also participate in skiing in a cross-country format.

If you would like to grab a quick snack on the way, the Solang Valley resort is a beautiful pit-stop. Its outdoor seating and beautiful gardens filled with apple and pear trees and beautiful flower beds, complete with beautiful gazebos, are a thing of beauty, in just about every month of the year. In winters, this area is covered in sheets of white snow and still makes for a beautiful breakfast spot once the sun is out.

The Atal Tunnel was built by the Border Roads Organisation at a cost of ~3200 crore rupees and was inaugurated by Prime Minister Modi in October 2020. It is the longest highway tunnel in the world. Building this at an altitude of 3000m (1000ft) above sea level, is no mean feat! As the primary function of this tunnel is to help defend our borders in a better way, photography is prohibited. If you happen to go there, please respect the rules and sanctity of the place - it has been created for our protection!

Once you reach, you might have to stop for police verification or for showing your e-pass - this depends from time to time, but within the years 2020-21, these restrictions have been implemented from time to time to keep the residents of this region safe from COVID. The healthcare infrastructure in these regions is not adequate and therefore, the government does its best to prevent any mishaps from occurring.

The tunnel itself is a straight, 9-km long stretch. It is well lit and has air vents for circulation. It includes air quality indicators, telephone facility and turning caverns at regular distances. The tunnel itself is often chilly due to the winds and lack of sunlight in the stretch.

The last 200 odd metres are especially spectacular if you travel in the winter time, as the tunnel opening will open you up to a winter wonderland - milky snow on chocolate coloured mountains, reminding one of vanilla ice cream smeared with chocolate syrup! 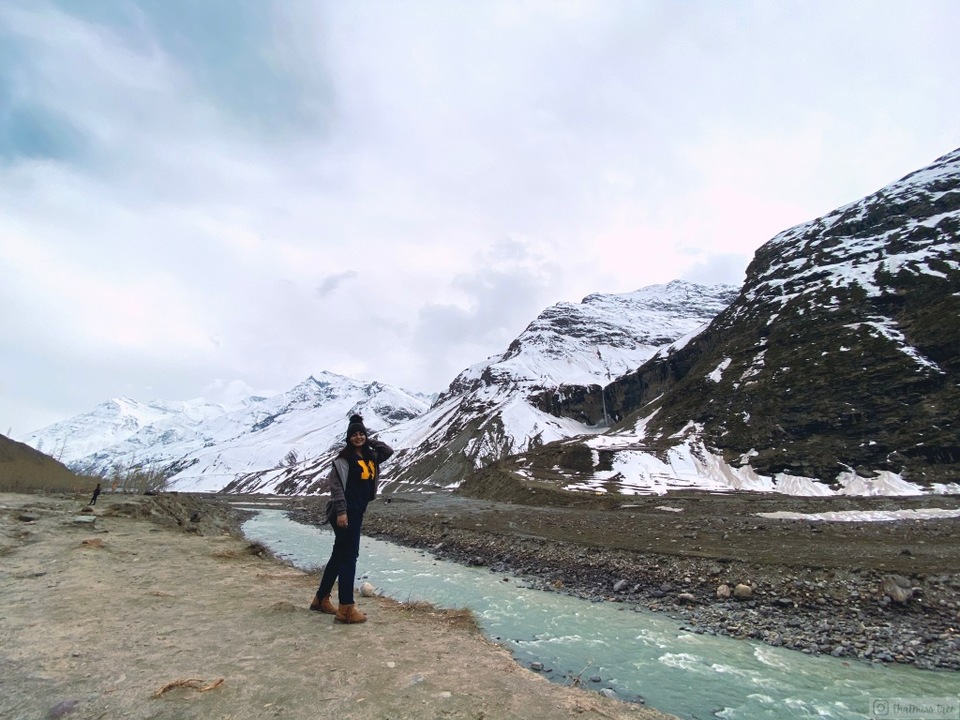 The best views come around winters, few days after a snow shower. There are two contrasts in the geography - on one side, the mountains are barren, nothing but piles of brown laden so high that one feels like a minuscule thing. And on the other, are these vanilla icecream with chocolate syrup kinda mountains - from which, a lot of waterfalls tend to originate as the snow continues to melt.

Driving from the tunnel, the closest landmarks are around Sissu - which is the nearest town in this region. The landmarks here are a waterfall and a temple - you can find more on that in my next post.