10 unexplored treks that every serious trekker must attempt 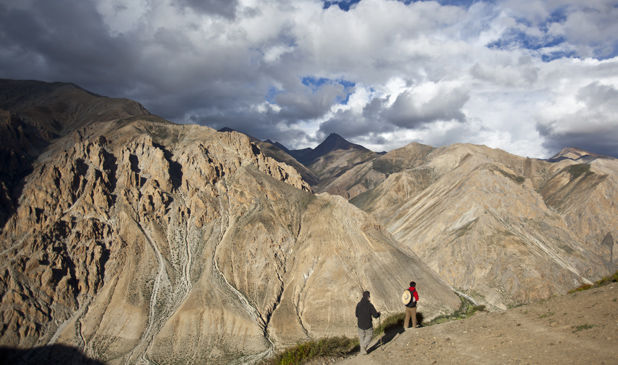 A true trekker loves to explore and face new interesting challenges. They go out of their way to experience the authentic cultures of unknown valleys and scattered quaint villages. To do the same old bunch of treks is now absolutely boring and new treks must be brought into awareness for the benefit of our fellow trekking buddies! below is a list of 10 unexplored treks that every serious trekker must attempt. Across the vastness of the Himalayas these trekking trails have hardly been taken on and are waiting to be traversed!

After the closure of the Nanda Devi inner wildlife sanctuary, the closest that trekkers can get to the ever alluring Nanda Devi Mountain is through traversing the Nanda Devi east Base camp trek. The trek stands as the last and only way one can get the most picturesque view of this majestic Himalayan peak that remains off limits.

This confronting trek in Ladakh is only what all serious trekkers dream of completing or summiting the Stok Kangri peak. With the challenge of high altitude striking more earlier than most treks, the minimum altitude one will come across is at Leh. The maximum level of elevation achieved is 20,182ft which counts for the highest Himalayan peak in the region of Ladakh. This trek remains unexplored and receives fewer footfalls in the whole season. It requires crossing ravines and big boulders along with steep climbs that make this trek even quirkier for serious trekkers. It also shares the initial climb route of the Hampta pass trek that also comes under this region a little further off Manali. Another peak off limits can only be closely visited through a trek to its basecamp. Kanchenjunga popular for being one of the most prettiest peaks in India can be viewed from various north eastern states as well as Uttarakhand. The trek starts at Sikkim and goes to the maximum elevation of 8586m and the mountain is the third highest peak in the world. What makes it different and unexplored is the absolute isolation from the mainland as well as the cute little gonpas and monasteries that come on the way. Dolpa lies in complete isolation with the more habited places and is home to Crystal Mountain popularly known as the Nepal region’s version of mount Kailash. The people you meet while trekking are extremely sweet and will last an impression on you longer than usual. Dolpa to shey is an exclusive experience that every serious trekker would want to invest into. Bordering china and Nepal and keeping it as close to the Tibetan plateau. Trekkers pass the Nara La pass at 4620m. The highest elevation achieved by trekkers is 4620m. The landscape transforms from wild flower orchards to crowded bazaars across village districts and strangely barren lands. Humla is known for being an off the beaten track destination and very alluring! On the same circuit as Humla valley traverse trek and also is just another off beat destination for serious trekkers to try out their skills in barren landscapes with minimal habitation. Trekkers come across authentic Buddhist and Bonpo culture in the villages. While trekking you also cross 2 high altitude passes that are breathtaking! Pitch in your tents at astonishing views and soak in the traditional culture that rests around you. The landscape is immensely vast and pretty, favorite of all those who love the sole beauty of the Himalayas. Maximum altitude achieved is 4949m and categorized as a moderate/hard trek. 8.Makalu via Everest base camp:

Being as a person always fascinated by mountaineers and mountaineering I couldn’t help but notice all the highest peaks of the world, and the highest being Everest and the toughest of all; Makalu. The trek goes up to the Everest base camp at 5364m via the Makalu base camp that rests at the height of 4870m. the trek is categorized hard/ extreme leveled.

A hidden gem in the Garhwali region remains unexplored. Just a few kilometers off Kedarnath, while trekking one crosses the Kham Pass and Hathini pass. What trekkers get to experience is the clearly visible Himalayan range with vibrant peaks! The trek begins at the sleepy quiet village of Ransi and goes up to reach Kedarnath, one of the most important sites for Hindu pilgrimage. The maximum elevation reached is 4757m and leveled at a moderate/difficult trek.

What once was unexplored now is the most sought after trek in India. Situated in Zanskar Valley, in Ladakh, the trekkers are expected to walk on a frozen river that very quickly is succumbing to problems of global warming. Every year a number of highly experienced trekkers trek the frozen river locally called the ‘Chadar trek’ as Chadar means “blanket” of ice. Chadar trek involves great technical knowledge and strength for the trekker to complete the full route that envelops in the Zanskar valley, inaccessible during winters. The only way to cross over to Zanskar is trek through the frozen river. One gets to see frozen waterfalls and a time-lapse of nature while the winter passes by. Maximum distance covered is 105km, and the temperatures drop to -35 to -40 degrees making it an extreme condition for the trekkers to survive in.