Puri or Jagannath Puri is the abode of Lord Jagannath the Lord of Universe. It is also known as Purushottam Kshetra, Shrikshetra, Neelachal, Neelagiri & also Shankh Kshetra. Various Puranas and Vedic literatures highly preach the holy name of the Lord and describe the glories of this place. It is one of the four Dhamas of Lord Vishnu in India. Other dhamas are Rameswaram in Tamilnadu, Dwarka in Gujrat and Badrinath in Uttarakhand. It is said that God (Lord Vishnu) dines at Puri, meditates at Badrinath, takes rest in Rameswaram and rules in Dwarka. Among all these places Puri is a Dhama as well as a Kshetra. Where god takes birth is commonly known as Dhama but where he resides is known as Kshetra. In Puri, Lord Jagannatha originates in the form in which he appears and also resides here. Skanda-Purana, the most voluminious of the eighteen Maha-Puranas, mentions the sanctity and glories of this most ancient and sacred kshetra in the following words:

“Although Lord Jagannath is is all pervading and is the source of all, and there are also other holy places which destroy all sins, yet this holy place is superior as it has become the body of this superior being. He himself is present there assuming a form and has indeed made that place known by his own name.” 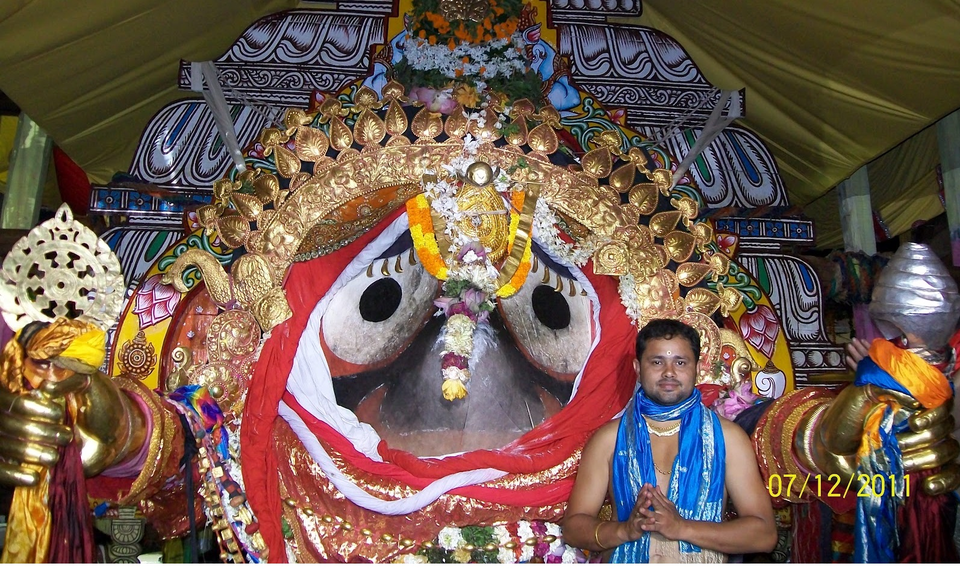 The word Jagannatha means the Lord of the Universe. So Jagannatha is the Lord of the Universe. The Jagannatha is also known as Purusottama: the best of all men, then the place called as Purusottama Kshetra. The consort of the Lord is Lakshmi. She is the embodiment of wealth. Her name is “Shri” means the wealth, prosperity & also fullness of all good things. This place is named Shrikshetra after the name of Mahalakshmi the consort of Lord Jagannatha. The name “Neelachala” constitutes as “Neela” means blue and “Achala” means mountain, as the temple is placed on the blue mountain. Moreover in the grand old days “Neelamadhaba” was worshiped here. “Neelamadhaba” constitutes three words “Neela+Maa+Dhaba”. Neela is Lord Jagannatha, “Maa” is Subhadra and “Dhaba” is Balabhadra. Hence Neela Madhaba took the present form as per his wish.

Jagannath Puri was already an established and well-known centre of Vedic learning by the time of Christ. Puri is 60kms away from Bhubaneswar the capital city of Orissa. It is well connected by roads and rail and the nearest Airport is Bhubaneswar. The road leads to Puri from Bhubaneswar is known as Jagannatha Sadak. It was first built during 1822 to 1828 AD. Raja Sukhamaya Ray of Bengal contributed Rupees one lakh for the construction. Now the road has received the status of National Highway.

Puri is the place of pilgrimage as well as a place of tourist interest. Britishers were deeply moved by the temperature climate and golden sea beach. Many categories of Hotels, Guest Houses and Dharmashals are available to Tourists. One will get lost in this place by taking the grand view of the Lord and enjoying the sweet sun rise and sun set at the sea. The person can only feel this. It is very difficult to describe the feelings in words. Would you like to visit this place and share your feelings with the feeling of others. 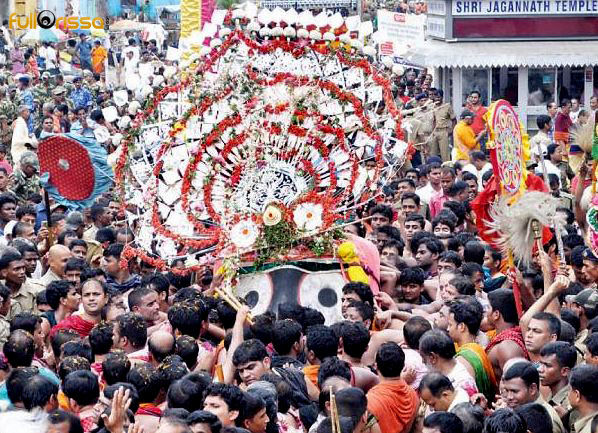 There are many festivals are observed in the Jagannath Puri, some of the important festivals are Chandan Yatra, Ratha Yatra (Car Festival), Dola Yatra, Jhulana Yatra, Snan Yatra, Gosani Yatra, Nabakalebar and many other festivals relating to Rama, Krishna, Durga, Ganesh and Sun God are also observed in the Lord Jagannatha Temple as the lord himself is the embodiment of all Demi Gods. Out of these festivals Car Festival and Nabakalebar are two most important festivals in Puri.

The cars of the deities in which they travel are designed in a specific style. Every year new logs of wood are procured from Daspalla forest for the construction of cars. The construction starts from the 3rd day of the bright fortnight of Baisakha (May) and are completed a day before the car festival. They are built by a specific skilled group of carpenters, who are well trained as per their family tradition.

The name of the car of Ballabhadra is Taladhwaja, Subhadra Devadalana and Jagannath Nandighosh. The style of cars is the same as that of main temple. On the day of Car Festival the Cars/Rathas are consecrated by the Temple Priest. The deities after morning meals are ascended to the cars by colorful procession called Pahandi Bije. After they seated in the cars. The King of Puri performs the sweeping ceremony in the chariots holding golden broom sticks and sprinking sandle paste water after cleaning. Then horses are tied in the cars the color of horses on Balabhdra car is Black, Subhadra is Red and Jagannath is White. The ropes are also tied to the cars and devotees are allowed to draw the chars with chanting of Hari’s Name, bitting of drums, trumpet and ghanta. The cars are pulled down to Gundicha Temple. It is said that one can get the benefit of 100years visit of the Lord in the main temple by just looking once in the Gundicha Temple on the day before the return festival.

On the ninth day of the festival  the deities are taken to the cars in a procession and then all devotees pull the cars towards the main temple. This procession is called Bahuda Yatra. On the eleventh day the deities are decorated with golden ornaments in the cars. The decoration symbolizes the victory of Gajapati in Kanchi war.

It is difficult to say when the car festival started who is the pioneer of the festival, but one thing is clear that the lord fist arrived at the main temple on cars from Gundicha Temple. More over the car festival observed as per the wish of the Lord to visit his birth place once in the year in the month of Asadha. The car festival symbolizes the highest truth of the life. It signifies that the body is a car on which the God (soul) sits. If one realizes that he is not the body but the soul, he can only see the Lord within him. Once the man realizes that he is the soul, the Sat-Chit-Ananda he will never sleep in the mother’s womb, the meaning there by he will never come through the cycle of birth and death. He is liberated. 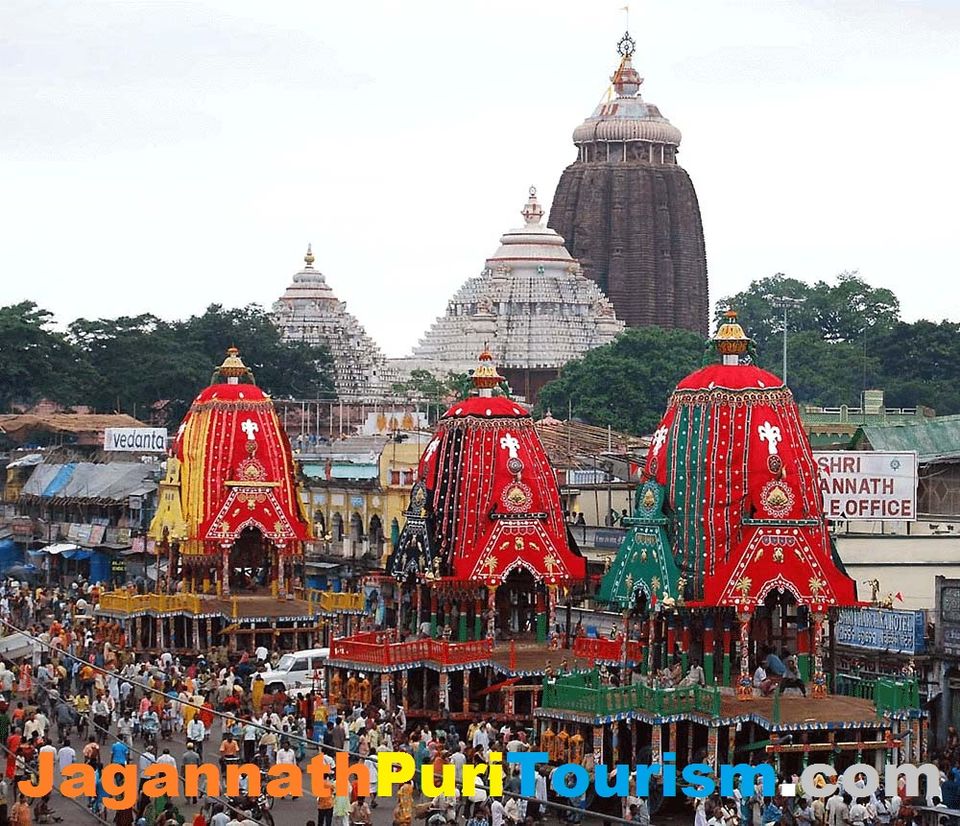