India Travel GuideIndia TripsThe Most Celebrated River Of India Does Not Even Exist!

The Most Celebrated River of India Does Not Even Exist! 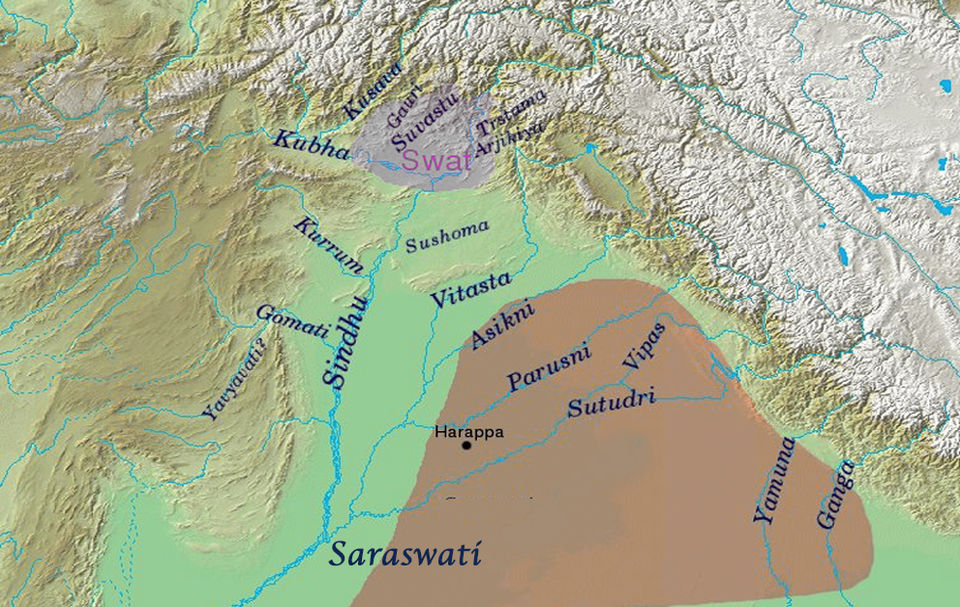 Saraswati- a name that resonates with Ganga and Yamuna.

If you were interested in mythology as well as geography as I am, you too might have heard of the legend of the three mystical rivers-Ganga, Yamuna and Saraswati flowing through the north of India to meet at the confluence city of Prayag, modern day Allahabad. However, as we have known and seen it, Saraswati isn't visible at Prayag. Then what is this myth around the river Saraswati? Did it exist? Where did it flow? Can it be retraced? Can it be revived?

If our great epics like Vedas & Upanishads are to be believed, there are multiple mentions of a grand river that flowed through the west of modern day India, parallel to the river Indus. Sages performed rituals on the bank of this river and emperors marked their territory with it. The river Saraswati was much larger than Indus and hence, had a significant economic and religious value. The rivers Yamuna and Sutlej were major tributaries of Saraswati which flowed in between the basins of Indus & Ganga. However, what brings charm to this lost river is the slew of stories found in religious text.

As per the Hindu texts, in the times when gods, humans and demons interacted with each other, the human sages had acquired the ability to travel through the three realms with their Tapasya, gaining the divine knowledge. Henceforth, they wanted the divine knowledge to flow from the heavens to earth for the betterment of every human. Knowledge was identical to fire as it is not static and cannot be contained. But the enormous fire of knowledge 'Badabhaagni' flowing freely by itself to earth could have engulfed it. At this time, Goddess Saraswati, on the request of Lord Brahma, took the charge to help transfer knowledge to earth by containing this fire within herself, and acquired the form of water. Goddess Saraswati enveloped Badabhaagni and flowed from the abode of gods in the Himalayas to earth. Saraswati, while she held the flames, slowly began evaporating herself, having completed the task of bringing knowledge to earth, she hurried her way to the oceans, . The warm waters of the river gradually evaporated from the surface, but knowledge kept flowing underneath the surface.

Another story of Saraswati is that as soon as she evolved from lord Brahma's forehead, he was mesmerised by her. To avoid lord Brahma's unwanted attention, Saraswati ran below the earth surface, only to come back on surface at times to take a rest. To know more on the Brahma-Saraswati story, you can visit the temples of lord Brahma and goddess Saraswati in Pushkar.

Mahabharata also mentions Balram, brother of lord Krishna, walking along the bank of drying river Saraswati on his way from Mathura to Dwarka.

Isotope dating and advanced imagery from satellites have also been used to trace the evidence of the existence of Saraswati in the Ghaggar-Hakra River system in the region north-west to Delhi. It is amusing to know that there are clear signs that the Indus Valley Civilisation did not thrive only on river Indus, rather, there are many lost cities which have been found on the identified course of Saraswati in Rajasthan. The river originated in Har Ki Dun valley in Garhwal region of Uttarakhand and flowed parallel to Indus. The river Sutlej and Yamuna joined the channel to create a massive river that traversed through Rajasthan making it a fertile, forested land. The river eventually flowed through the modern day Gujarat to meet the Arabian Sea. The ground water repository found in the Jaisalmer region also point towards the existence of a lost water source that existed thousands of years ago.

Reasons for extinction of Saraswati

Science explains the gradual extinction of Saraswati because of geological developments which began around 5000 years ago. The degradation of Aravalis and the rise of Himalayas caused Sutlej to change its course and flow into Beas; similarly, Yamuna changed its course and joined Ganga. Saraswati lost her major tributaries from Himalayas and became dependent on rain for replenishing. She soon started running dry in her lower stretches. This period was also identified with tectonic shifts and earthquakes that led to beginning of the formation of the Thar desert. Increasing surface heat in the region, unquenched volumes from tributaries and geological turbulance in the region caused the river's extinction, as the river broke up in patches across Rajasthan, now existing as ground water and lakes.

Can Saraswati be revived?

Recognising Saraswati river as a part of our rich cultural heritage, the Haryana government along with Indian Space Research Organisation (ISRO), the National Institute of Hydrology (NIH), the National Remote Sensing Centre (NRSC) and the Geological Survey of India (GSI) is working on the revival of Saraswati through the investigation of palaeochannels (the course of dried rivers filled with sediments).

Where to trace Saraswati?

Though the ancient river may or may not exist in its original form, the traces of the most celebrated river have been kept alive in the form of rivers and rivulets that flow in the same region as Saraswati once did. Siddhpur and Patan in Gujarat are historically important cities on the bank of a river called Saraswati. This river dries up as it flows a few kilometres ahead of Patan. In the north, a stream called Saraswati joins Alaknanda river at Keshav Prayag near Mana village close to Badrinath. The locals do have tales to tell about the river when you visit these places.

The story of Saraswati be believable or not, what will remain true is that rivers are crucial for the development of civilisations. Rivers may be lost because of natural or man-made factors, and while Saraswati may or may not be revived, it's still in our hands to not let the existing rivers get extinct. These important sources of water need to be respected and preserved from activities harmful for the environment, so that our existing rivers do not become a myth for the future world.