A trip to the western coast of Karnataka 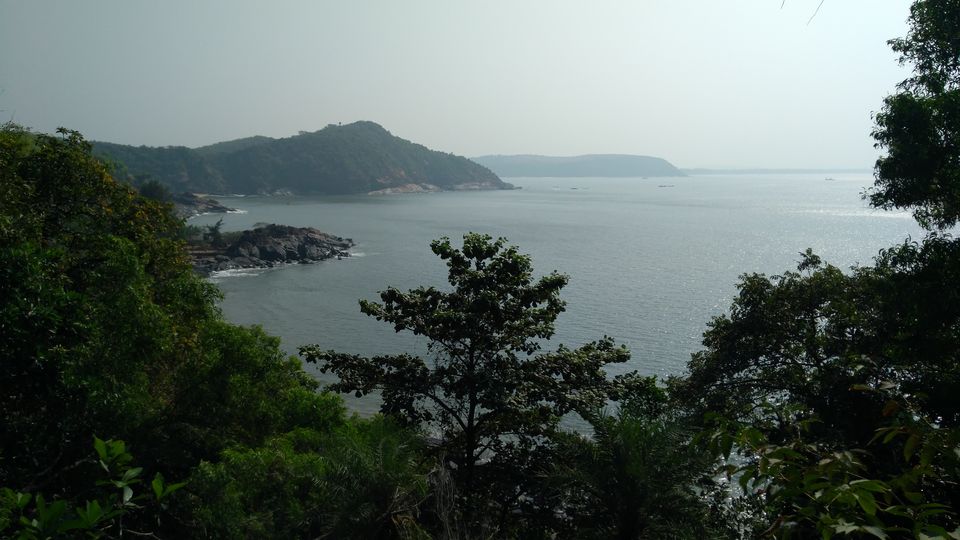 A last-minute sanction of the Christmas holidays got my wife and me planning for a short trip around Bangalore. A consideration of factors like availability of bus tickets and hotels, trip duration, tourist density and novelty of the tourist place veered us to the western coast of Karnataka. We planned to visit Udupi, Murudeshwar and Gokarna in the next four days. We took an overnight KSRTC bus to Udupi and landed there in the morning at 7 am. Fortunately, we had managed to book a room at the Century Executive, Udupi, considering almost all the hotels in the city centre were booked already. The USP of Hotel Century Executive is that it allows one to check-in at any time during the day. After a quick breakfast at Mitra Samaja restaurant, we headed to Malpe beach. A 20-minute ferry ride from Malpe beach took us to the famed St. Mary's island that has stunning columnar rock formations formed as a result of sub-volcanic activity. The island is surrounded by crystal clear unpolluted sea waters, which was refreshing to see. We spent a couple of hours here clicking photos, climbing and posing on the rock formations and playing in the sea. Contrary to a few reviews I read on the internet, the island houses a couple of eateries providing basic food and water. Around 1 pm, we boarded a ferry back to Malpe beach and reached Udupi town for a North Indian lunch at the Woodlands restaurant. Later, we headed to the Shri Krishna temple only to find a long queue. We decided to skip the temple visit and headed to the hotel for a siesta as the previous night's bus journey was not very comfortable due to the poor road condition in the Shiradi ghat section of the western ghats. Another tourist spot that can be covered is the Kapu beach (about 20 kms from Udupi). The beach has a lighthouse that opens around 4 pm. Since we had already been to the lighthouse in Alleppey, we skipped this spot too. For dinner, we went to MTR to have their masala dosa, which both my wife and I are a fan of. Udupi seemed like a relaxed city without the hustle and bustle which we city folks are accustomed to. This was a welcome change from the daily routine. Any blog on Udupi would be incomplete without talking about its food (This city has a cuisine named after it!). While the best way to explore this cuisine is to have "prasad" at the Shri Krishna temple, one can also savour it at Mitra Samaja outlets located in the Krishna temple premises. We tried the Mangalore buns for the first time at Mitra Samaja and fell in love with them.

On day 2 of our trip, we took an early morning KSRTC bus to Murudeshwara. The bus journey takes 2.5 hours and by 10 am we had reached Murudeshwara. We headed straightaway to the temple. The gopuram of this temple has a lift facility (costs Rs. 10 per head) which takes us to the 18th floor from where one can have panoramic views of Gokarna and the sea. I would recommend availing this lift facility as the views from the top are breathtaking. Murudeshwara has the second tallest Shiva statue in the world that is located near the temple and is another must-visit spot. We had lunch at around 1 pm after visiting all these places. The temple premises has a luggage room where one can store luggage. We took a taxi from here to Gokarna and reached our final destination of the trip by 3:30 pm.

Gokarna is the less commercialized, less crowded and more chilled out version of Goa (specifically North Goa). It has five beaches: Gokarna beach, Kudle beach, Om beach, half-moon beach and Paradise beach. Gokarna beach is located in the main town area. It is crowded and is best avoided. The rest of the beaches in Gokarna are scenic, clean and sparsely populated. We had planned to spend 2 nights in Gokarna. The first hotel was on Kudle beach. Kudle beach is the most commercialized beach in Gokarna with a number of shacks offering Indian, continental and Israeli cuisines. Almost all the shacks have accomodation facility which costs around Rs. 1000-1500 in the off-season. During the tourist season (essentially the winter months), the rates are hiked. We went for a swim in the sea after checking into the hotel. Later, we relaxed in one of the shacks watching the sun set into the sea. This beach is buzzing with activity even in the night with people strolling in the sand and foreigners shack-hopping and frolicking on the beach. Kudle beach (and indeed all the other beaches in Gokarna) offers picture-postcard views. Gokarna has a unique topography in that small hillocks surround the beaches on three sides. The final reach to Kudle beach is accessible only on foot as one has to venture down the hill.

On the next day, we began our journey to the other three beaches (Om beach, half-moon beach and Paradise beach) at about 7:30 am. These beaches are a 20-minute trek away from each other. The trek from Kudle beach to Om beach is easy and the trekking level increases progressively as we move on to the other two beaches. Om beach can be reached by road from Kudle hilltop if you don't prefer to trek. Autos are widely available in Gokarna. As one descends towards Om beach, the OM symbol forming naturally on the beach is clearly visible. We reached Om beach just in time for breakfast at Namaste cafe. Next on the list was half-moon beach. A trek through a fairly dense jungle (the trek route is safe, you will meet groups heading to/returning from half-moon and paradise beaches) took us to the half-moon beach. Enroute, the trek offers a few magnificient views of the sea and the beach from the vantage point of the high hills. The half-moon beach gives you the feeling of arriving at a private beach. There were about 7-8 people on the beach when we reached. This beach has just one shack and no accomodation facilities. We took a swim in the sea at this beach for about an hour. Apart from travelling on foot, the half-moon and paradise beaches can be reached by boat from Om beach but trekking has its own share of advantages. We decided to return back to Om beach and not proceed further to paradise beach. Boats keep arriving regularly to the last two beaches from Om beach. We boarded one such boat (charges Rs. 250 per head) that took us to paradise beach via the sea and then dropped us at Om beach. On the way back to Om beach, we got to see a couple of dolphins swimming in the sea. We trekked back to Kudle beach by 1 pm and checked out of the hotel. Our next hotel booking was at Sanskruti resort. We checked into the resort in the afternoon and relaxed for the day. The resort is picturesque and ideal for lazing around. The next day we visited the mythologically important Mahabaleshwar temple which is about 1600 years old and the adjacent Mahaganapati temple. After lunch at Prema restaurant (famed for its home-made icecream), we decided to spend some time at Kudle beach as our KSRTC bus was to depart from Gokarna at 7 pm that evening.