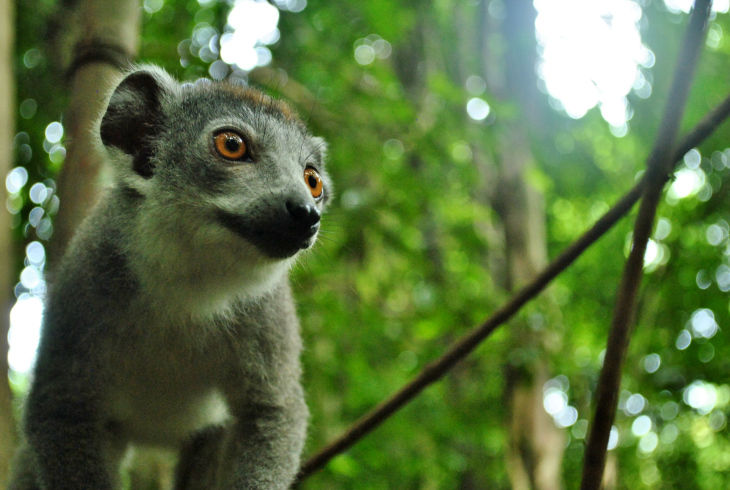 The RN7 about 15 kilometers south of Antsirab 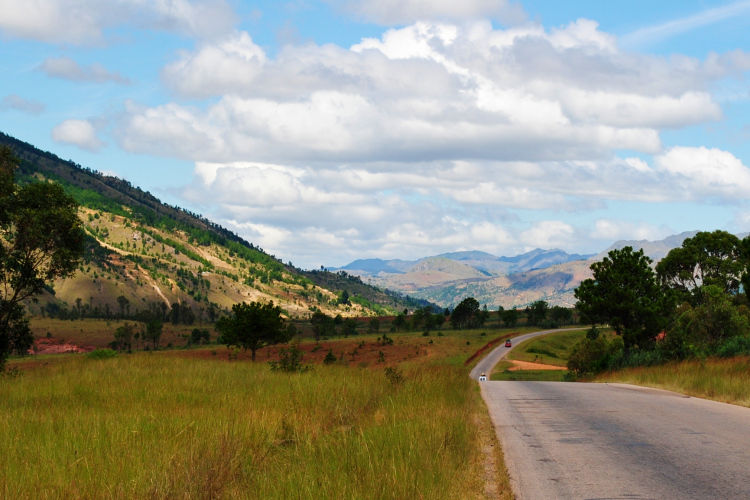 Crossing the Tsingys on a makeshift bridge 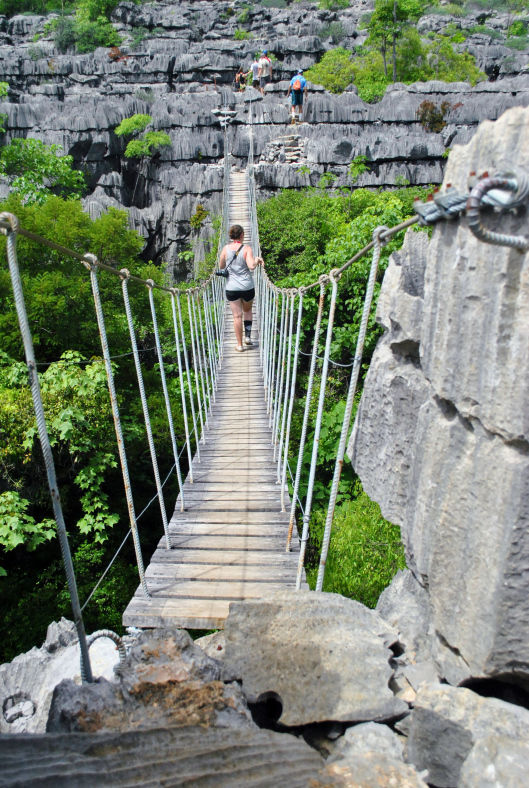 A traditional canoe called a ‘lakana’ 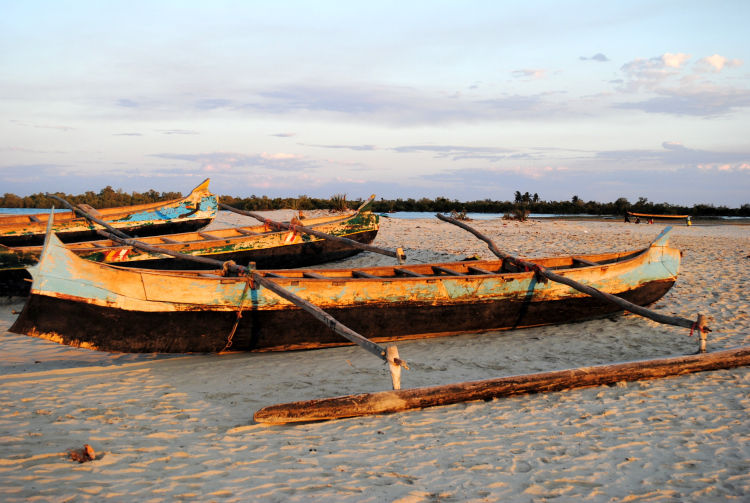 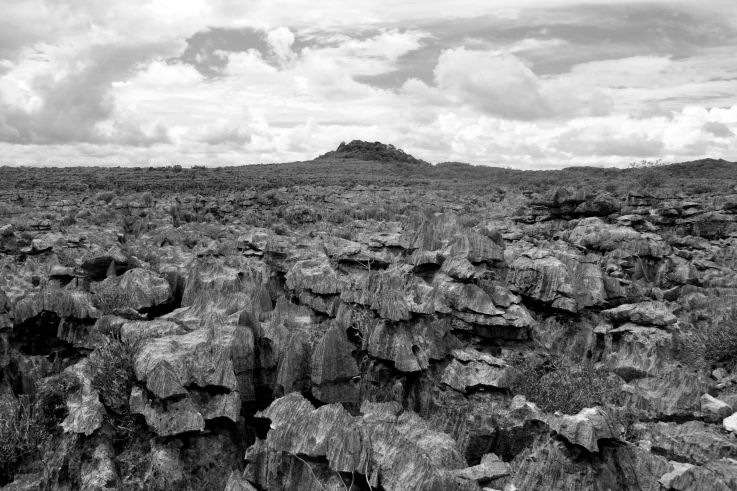 I took the trip to Madagascar as a Peace Corps Volunteer. Madagascar, the fourth largest island in the world located in the Indian Ocean, is a tryst with ethnic culture and nature. I, along with most PCVs, came to Madagascar knowing little about it but willing to make the commitment based on the little we did. After we got here, we spent much of our first few months figuring out what this place was all about and in the process uncovered wonderful and awful aspects of Madagascar’s character. Yet despite all of the awful (smelly piles of trash, annoying men, general lapses in logic) we found ourselves forcing to focus on the parts we loved in order to make the ‘marriage’ work (beautiful landscapes, cheap fresh vegetables, laidback attitudes). I was in Madagascar for around two years but, there are some places that have struck a chord with me. These are a few highlights of my extended stay there. Parts that I loved and that I will take back as memories.

I spent a month just outside of Andringitra National Park, but even a whole day there would suffice for you to see the park. In Ambalavao, the town where travelers stock up on food and supplies before catching the final bus to the edge of the valley, one of the guides, his wife, and two year old son waved me down while I was walking to market. The two-year-old didn’t remember me but talking to the guide and his wife, both of whom had been enthusiastic and cheerful students, I suddenly got an impression of what this trip would be: warm, welcoming, and an unexpected return to familiar faces and surroundings. From Vohitsoaka to the three camp sites in the valley, it’s about a two and a half hour walk on a wide, dirt road through rice fields, mountains, and the occasional compound of huts almost too small to be called a village. On that day, we had arrived on the cusp of a thunderstorm, giving the valley an almost sinister feel. One of my friends joked that we were headed towards Mordor. As we hiked over hills, we watched the clouds roll in, anxiously pondered a wall of rain in the distance, blocking mountains I knew we would have been able to see had it been clear. The shift in weather suddenly made it difficult to believe it was just four in the afternoon when we finally put down our heavy packs in the dining room at Tsara Camp, the cheapest of the three-camp site cluster at the foot of the rocks we had set out to climb.

When we finally set out to climb the next morning, it was one of the many people I had met and talked with in my previous stay who ended up guiding us to the base of a vertical multi-pitch route and helping us through our first ever multi-pitch attempt. With someone I had known from months before, the stiff client-guide relationship easily dissolved into an amicable friendship. “It’s so great being able to climb and speak Malagasy with you guys,” he said at one point, making me believe it wasn’t just a one-sided sentiment.At the end of the day, tired, I was more than happy to pay too much for a cold Coke.

Next week, I took a short trip to RN7 just south of Fianaratsoa, somewhere near Anja National Park, in the wine-making region of Madagascar. Wine tasting is a cherishable experience in Madagascar. Trust me, it’s terrible — I once got drunk after drinking an entire bottle because I was convinced it was just weird tasting grape juice and it couldn’t possibly be actual alcoholic wine. Needless to say, I was a bit shocked when I stood up.

Antsirabe in general just makes all the frustrations of life in Madagascar worth it. I have yet to figure out why the local music scene in Antsirabe is so vibrant – some bands from the area have even gone off to tour in La Reunion and France – but you don’t see me complaining. Almost every Friday night, folks in Antsirabe can find a live concert happening at Alliance Francaise, either for free or a small cover charge of about 5,000AR. The bands are almost always Malagasy, sometimes traditional but sometimes more of a rock/reggae kind of vibe.

I had spent six months in Madagascar before finally arriving in Ankarana National Park and getting the chance to see the dramatic landscapes and protected species that most tourists witness an abundance of on short, well-catered vacations. I set off, with nine other PCV's, into the humid, buggy, rainforest of Ankarana for a pair of caves dubbed “The Bat Caves” by our guides, I felt almost hyper-sensitive to the near total lack of human presence, the enveloping hum of cicadas and the raw smell of earth and wet trees. Finally, we tore ourselves away from the lemur-filled patch of forest and continued onwards to witness one of the less iconic animals indigenous to Madagascar, the Commerson’s leaf-nosed bat. A narrow path took us through tangled vines and alongside towering boulders, before arriving at a pair of caves the size of a five-story tall building, drifting thankfully cool air from their dark and mysterious depths.We were all relieved when the guides told us to take out our headlamps and take off our hats (to honor the dead ancestors whose spirits live in the caves) and follow them through the cool, hollow passages.

Once far from the entrance and collected in the belly of the cave, the high-pitched murmur of bat squeaks became slightly louder and a light shone upwards to reveal thousands of sleeping bats blanketing the entire roof of the cave. A couple fluttered around and I held my breath in the hope that none of the (20-something-year-old) boys would childishly throw a rock or shout loud enough to wake them up. Fortunately, we left the cave without a mass of bats frantically following our exit, and continued on the other half of the trail, which runs as a loop back to the trailhead.

Before bidding farewell to Madagascar, the picturesque Boababs were my last stop. I selfishly wanted my postcard snapshot of the Avenue de Baobabs at sunset too. They’re just so damn photogenic. I wasn’t alone in this. Car after car full of tourists rolled in, parking at the entrance closest to the road back to Morondava town or pausing for a few seconds to drop off groups returning from the Tsingy de Bemaraha National Park, so they could lazily walk the several yards of baobab-lined path back to their private four-by-fours just in time to get dinner. After we put away our cameras and piled into our taxis to head back to town for pizza, the cool night breeze forcing me to put on a sweater, I felt reminded of why I love travel — for these moments of absolute beauty and tranquility. For being separated from ‘the rest of the world’ but in such a way that isn’t anxious, but peaceful. I felt absolutely content to be where I was in that moment, but at the same time excited for the adventures to come.

HotelsMap
This Island country located in the Indian Ocean has a vast amount of experiences to offer. From trekking to spotting exotic wildlife, to eating locusts, to tasting wine, it is a ride. It may be one of the poorest countries in the world and may be politically unstable, but it is rich in bio-diversity, culture and adventure. 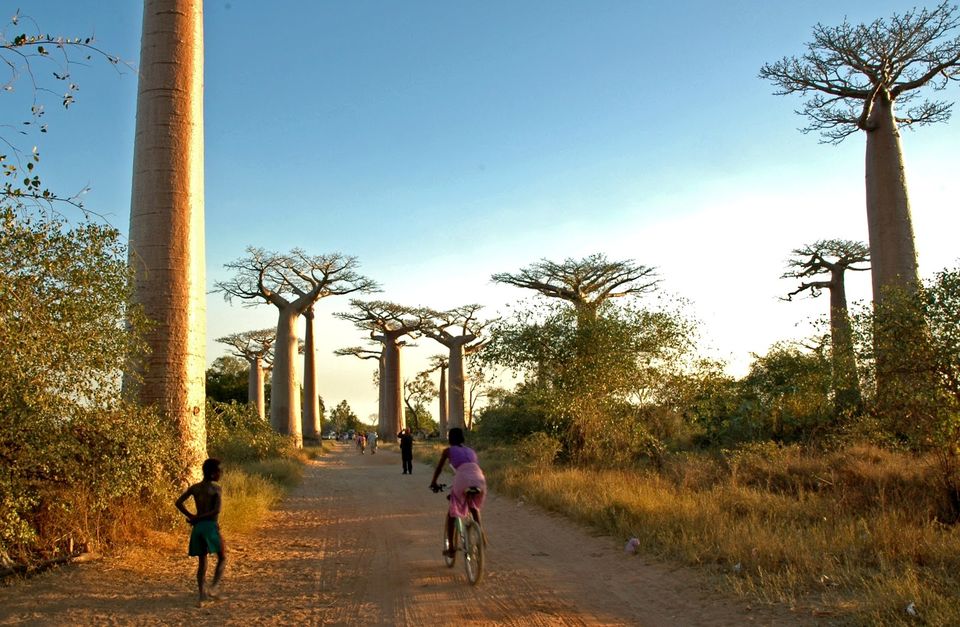 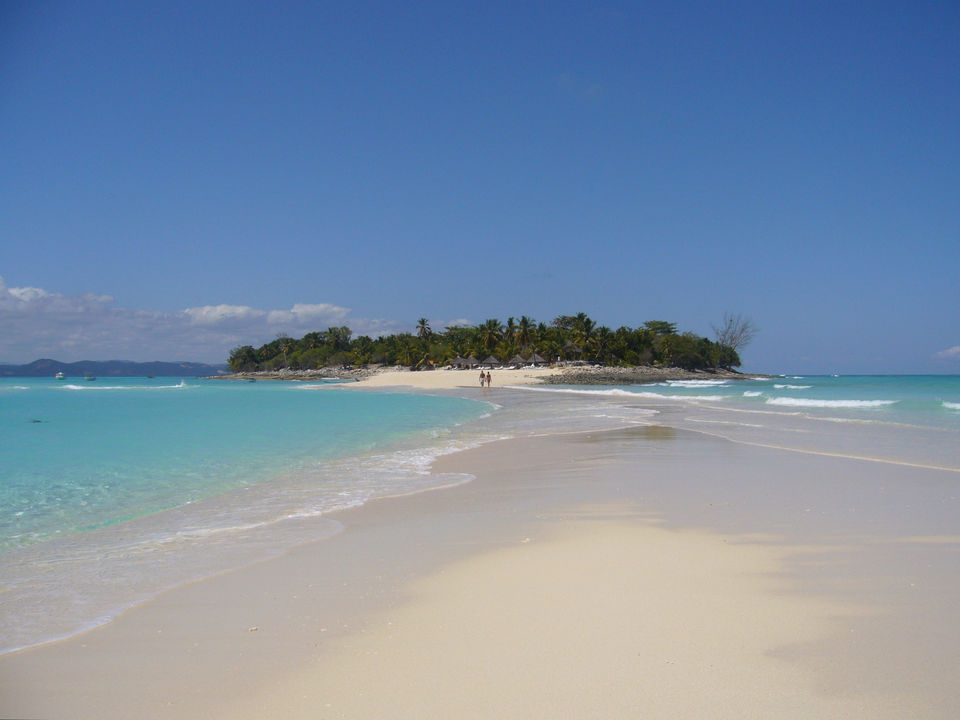 HotelsMap
The National park is one of the most scenic places, with waterfalls, mountains and unusual landscapes.Even before we entered the park, I felt as though I was following a trail of memories. It houses around 100 species of birds and 50 species of mammals. A visit here is necessary to understand the rich ecosystem that this island sustains. 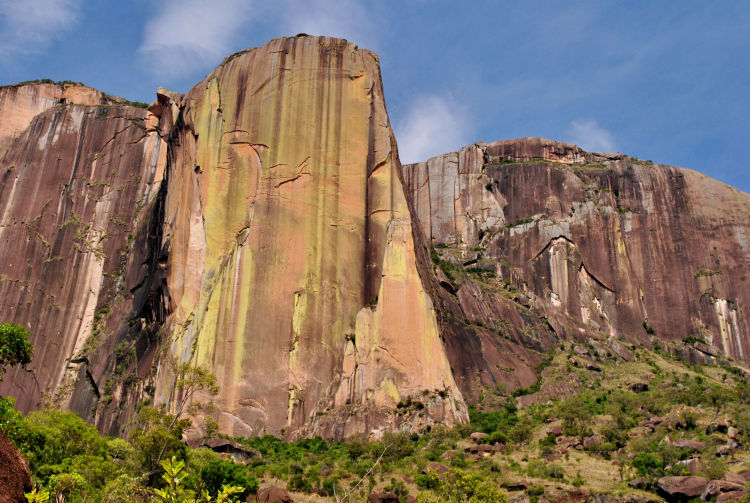 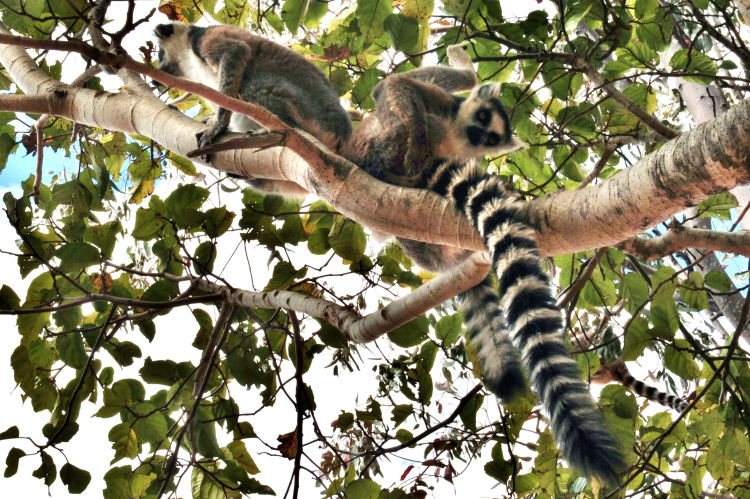 HotelsMap
Soavita Vineyards, located in Ambalavao, a large town which, like many wine regions around the world, seems to be the art center of the country, is the hub of Wine-tasting in Madagascar. Covered with vineyards started by the French and later taken over by the locals, this is nothing like your other lavish vineyards of California or Australia. You won't be served wine in clinking glasses, but you will have to take the effort of climbing up the wooden vats and dipping your cup to get the taste of some fine Madagascar wine. 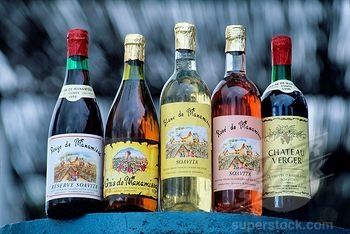 HotelsMap
A small city just 160km south of Antananarivo on the RN7, I would argue that Antsirabe is Madagascar’s best urban gem (and this is even after visiting Mahajunga, Diego, Fort Dauphin, Tamatave, Fianaratsoa, and Antananarivo). In a country most visited for its national parks and wildlife, it’s easy to gloss over the cultural aspects of travel here. However, Antsirabe is a compact, and easy to reach city that has it all. Throughout the city are signs telling residents to keep streets clean and it seems like people actually listen. Sure, there’s a lot of room for improvement, but compared to most urban areas in Madagascar, Antsirabe is down right tidy. Most spots worth seeing are within walking distance of each other. 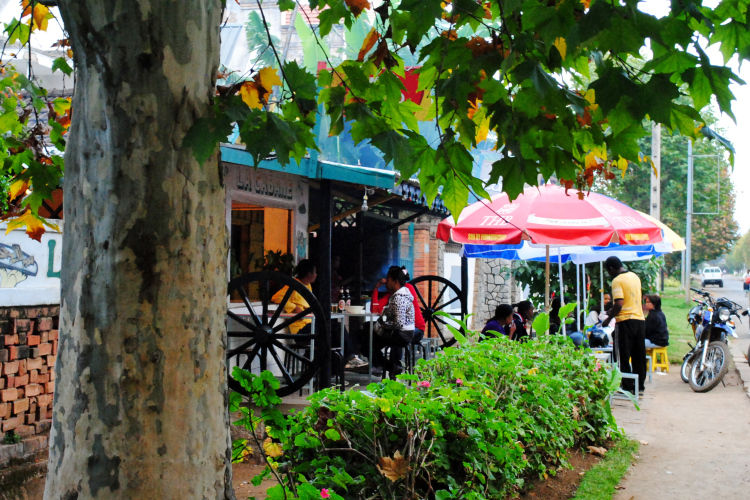 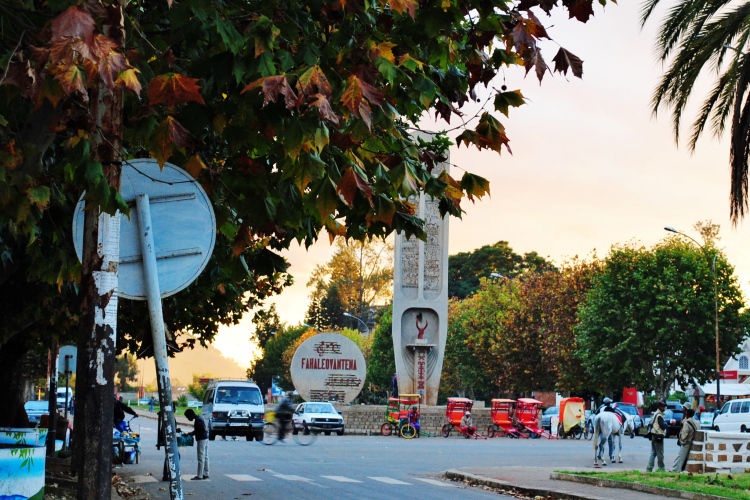 HotelsMap
Diego Suarez, the northernmost city in Madagascar (known as Antsiranana in Malagasy) is a “small fishing village”, but tell someone from Diego that they are from a village and they’ll likely tell you off. Within Madagascar, it’s a hub of cosmopolitanism in the north. The city boasts a couple of night clubs, banks, a university, round the clock electricity (which says nothing of its reliability), and an airport. And then, there’s this semi-cryptic graffiti all over the place — a style of art I've always associated with urbanism. 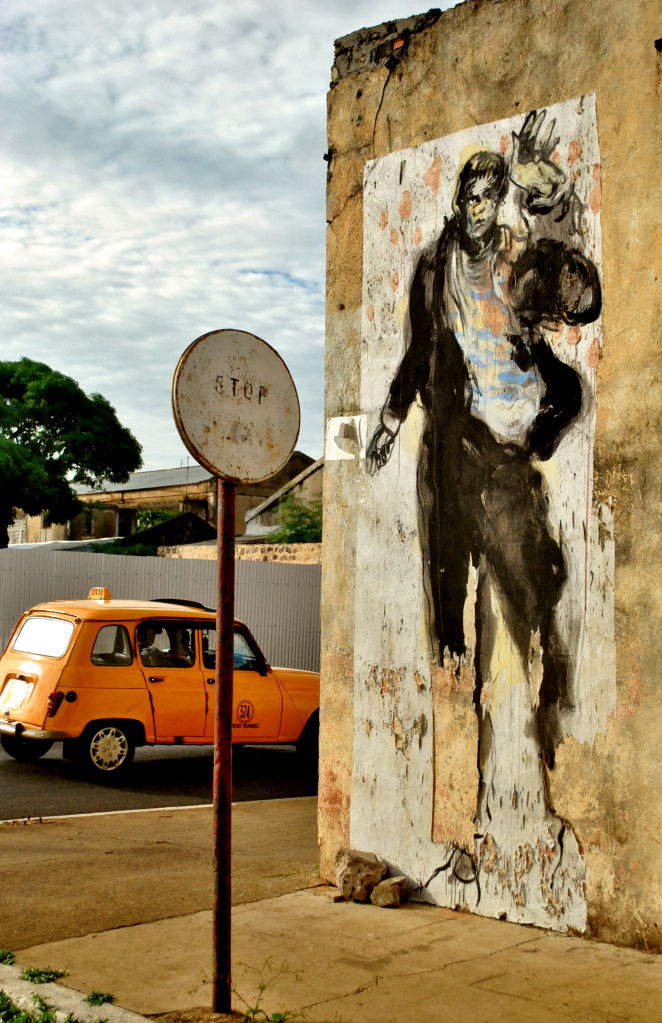 HotelsMap
If you want a taste of some rough adventure, this is your place. I took an exhausting yet memorable trek here. The lofty trees and greenery thinned out to lead us to an expansive, grey tsingy forest. Yet another one of the otherworldly geological features unique to Madagascar, the tsingy forest is composed of sharp, porous towers of deciduous forest. Many of the rock pillars are connected so that the trail took us over and above, rather than through, the rock forest. Carefully, we wobbled over the uneven path until reaching a lofty peak overlooking a field of spiky tsingy towers and lush, deep-green rain forest, before heading back down to finish the hike. 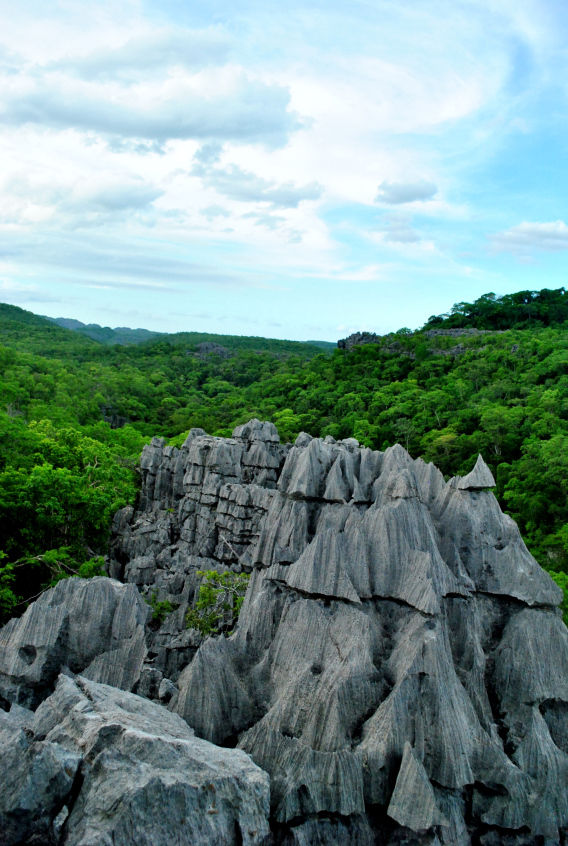 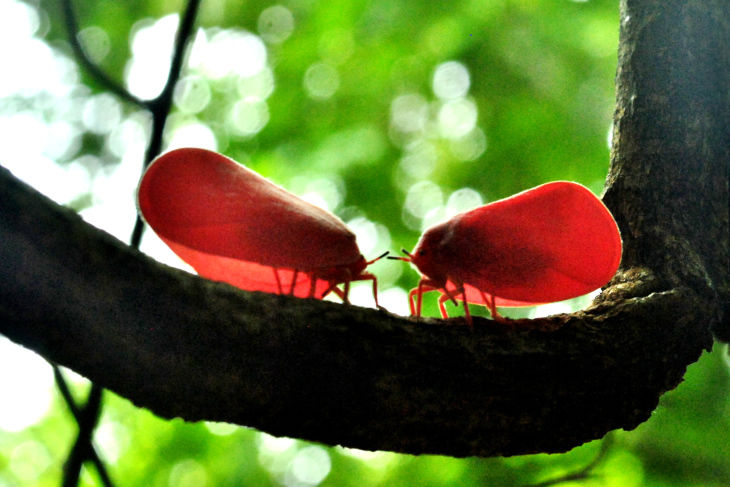 HotelsMap
The Avenue De Baobab's in Morondava is heaven for any photographer. Thousands of tourists flock here to click these pretty trees. There are around 20-25 trees lined up. These tree are around 800 years old and form a legacy for Madagascar. Sadly, they are threatened although efforts are being made to conserve them. 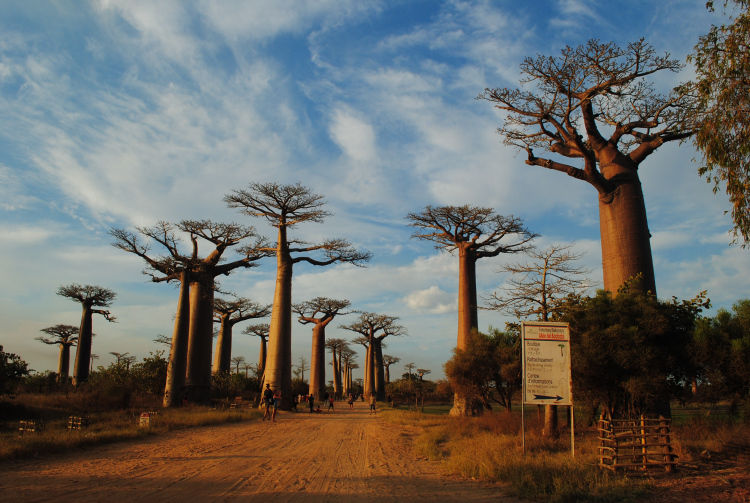 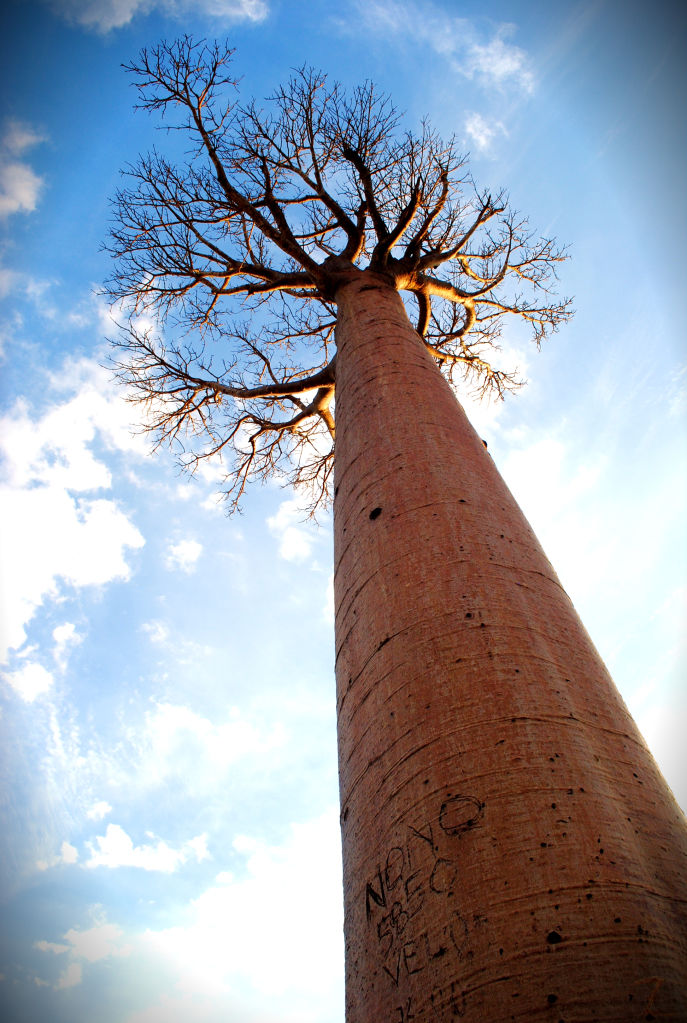