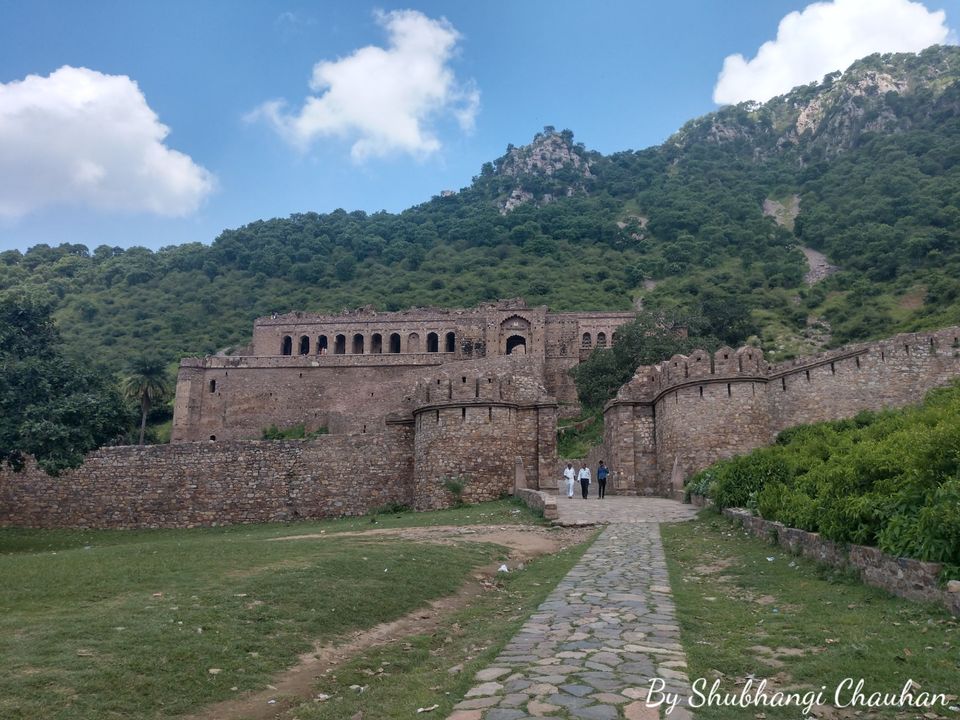 Popular as one of the most haunted places in India. It's believed that Bhangarh was purportedly brought to ruin as a consequence of the curse of a tantrik named Baba Balanath.

Located at 300 KMs from Delhi and 85 KMs from Jaipur

How to Reach : There is no direct local conveyance to reach at the fort site. Best option is to hire a private cab.

I was always curious to know more and more about this place. I had seen many videos and articles about this place, which claim that it's actually haunted and house to many ghosts. Some local people and even tourists claim to have experienced negative energies inside the fort. So during my Rajasthan trip i decided to visit this fort to experience if there is actually something wrong about the place.

There is a Hanumaan temple near the main entrance gate. When entered i saw roofless damaged constructions. It is a completely ruined place. There are more temples, with no idols inside. Idols have been stolen by thieves. This fort really has a tragic past.

As i went along I saw the main building of the fort. It has floors that are accessible through staircases. You can get a view of surrounding area from the top of the fort. Fort is surrounded by a huge garden.

While inside, I was imagining if ghosts really roam here in the night ? May be I am standing next to a ghost who is in sleep during the day!!!

Fortunately or unfortunately I did not sense anything scary there.

There is nothing much to see as 75% of the fort is totally damaged. To me it looked very dull and dirty. The fort is infested with bats and snakes at places and this makes it too stinky to even enter. It’s not a very pleasing site to visit with family.

Though scientists have disapproved all of the stories, but villagers strongly believe them all.These tales have been in circulation for years.

1. It’s common to hear noise of crying women breaking bangles, and screams of people fighting with swords, near the fort during nights.

2. People who dared to enter the fort in the night could never come out alive.

3. Villagers avoid going near to the fort in the night as many of them have experienced being followed by strange man or woman who disappeared after crossing the fort area.

4. It’s believed among villagers that Princess Ratnavati of Bhangarh was responsible for this. A local black magician fell in love with her and once tried to bewitch a cosmetic she was supposed to use, to make her fall in love with him. The princess smelled suspicion and foiled the entire conspiracy of the black magician by pouring the bewitched cosmetic over a massive stone boulder, which then supposedly crushed the 'tantrik' to death. Before death, he placed a curse upon the entire landscape that no soul would ever be able to live in peace there. The entire landscape around the Bhangarh Fort has been haunted since.

There are several stories and myths like these, but no one could give any scientific reasoning or proof of the place being haunted.

It took me an hour to cover this whole site.

While coming out of the fort I met a man who was setting up some cameras and ghost hunter equipment in his vehicle. He told that he was on a 3 days research project on existence of ghosts.

An old man from village casually asked me if I liked the fort. He was curious to know why people from around the world come to see this old, ruined and stinky place. I asked him the most obvious question. “Baba, is this place really haunted. Do ghosts live here?” He just smiled and answered: I have not seen any but no one can stay inside this fort in the night, and this is the truth.

I thanked him and left the place. Still in a doubt if that old man was a ghost!!!

Joke apart, I did not feel anything scary there. I enjoyed my visit and left to Jaipur. :)