10 Longest Tunnels In India You Would Love To Drive Through

10 Longest Tunnels in India You Would Love to Drive Through 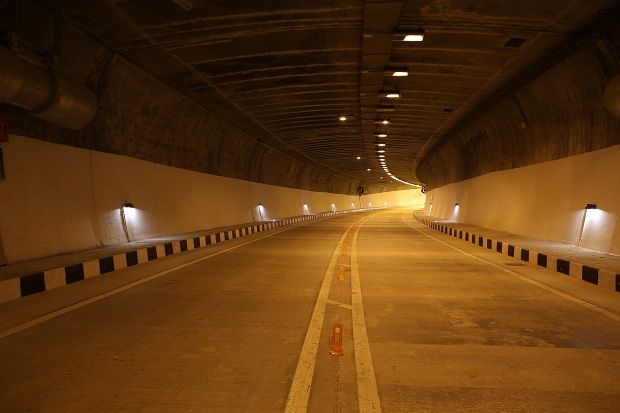 India has undergone significant improvement in its Aviation and Maritime industrial sector. Yet travel enthusiasts often prefer to venture around by road. It is still a pleasure to travel in a cab, or a bus exploring the vivid environment around. The journey between two places are many a times eased by long tunnels.

The country takes pride in hosting some of the exotic tunnels, driving through which is thrilling as well as intriguing. The scenic beauty adjacent to the tunnels is a treat to the eyes. The best part is many remote tourist spots are now well connected due to the construction of these tunnels; portraying the brilliance of Indian engineers, designers, architects and developers.

Without further ado, let us check out 10 Longest Tunnels in India you would love to drive through.

Dr Syama Prasad Mookerjee Road Tunnel is the longest road tunnel in India. It was inaugurated in the year 2017. The length of the tunnel is approximately 9.34 km, starting from Chenani and ending at Nashri. Located at a height of about 4000 feet above sea level, the tunnel is significant in reducing the travelling distance between Jammu and Srinagar, the capital city. The time taken for the travel is now less than 2 hours. The tunnel has two tubes running parallelly to each other. Adjacent to the primary traffic tunnel, an additional safety tunnel is constructed. The diameter of the primary traffic tunnel has a diameter is approximately 13 meters, while that of the safety tunnel is 6 meters.

Atal Road Tunnel is the longest high altitude tunnel in India. Initially it was known by the name of Rohtang Tunnel. Later on it was named after Atal Bihari Vajpayee, the former Prime Minister of India. The construction of the tunnel started in the year 2010 and was inaugurated in October 3, 2020. The primary objective was to reduce the distance between Manali and Keylong. The tunnel is located just beneath the Rohtang Pass of Himachal Pradesh along the Leh - Manali Highway. It stretches for a length of about 8.8 km and is located at an altitude of about 3000 meters. It is an awesome experience to drive through the tunnel soaking into the beauty of the Pir Panjal Range.

Banihal Qazigund Road Tunnel is the newly constructed tunnel in the Jammu and Kashmir region. The construction of the tunnel started in 2011. On 4th August 2021, the tunnel was declared to be operational by Nitin Gadkari, the Union railway minister of India. The tunnel is situated at an altitude of about 1800 meters above sea level and its length is approximately 8.5 km. It has significantly reduced the distance between Banihal and Qazigund. The tunnel has two tubes that run parallel to each other. It has resolved the problems of disruption of food transportation during the winters and landslides into the Banihal region. The tunnel is equipped with 124 jet fans, 234 CCTV modern cameras, an exhaust system and a firefighting system.

The14.2 kilometer long road tunnel is still under construction. The construction started in 2018 and is expected to complete by June, 2022. The tunnel is believed to be positioned as the longest bi- directional road tunnel in Asia. It will enable crossing the Zoji- la Pass in 15 minutes compared to the 3 hours it takes to cross now. The purpose behind the construction of the tunnel is strategic. The Armed Forces of India has planned establishment of the tunnel due to the vulnerable position pf Pass near the LoC (Line of Control). Being built with the state of the art technology, it will establish proper connectivity between Kargil and Srinagar. Supplying foods and other essential items to the defence personnel and boosting up trade and tourism are also some of the key motives.

Sela tunnel in Arunachal Pradesh is still under progress and is expected to complete by 2022 year end. Stretching across a length of about 12.04 km, the tunnel will run through the enthralling Sela Pass in Arunachal Pradesh. Named after the pass, Sela tunnel is a stupendous initiative to reduce the travel time between Dirang and Tawang. It has twin tunnels of lengths 1790 and 475 meters respectively, perfect for a joyous ride across them.

Aut tunnel in Himachal Pradesh started to be operational in the year 2006 and was at that time the longest tunnel in Asia. Stretching for a length of about 3 km, it serves as the entrance door to Kullu and Manali. Riding through the tunnel needs a bit of adventurous mindset since the road is bit rough. It is located near Larji Dam Reservoir in Himachal Pradesh and is double-laned. Ventilation facilities, fire extinguishers and CCTV cameras are yet to be deployed inside the tunnel. Yet you can enjoy the thrill of whizzing in a car inside the tunnel.

Ghat ki Guni tunnel in Rajasthan connects Jaipur, the capital city, with the city of Agra. Located on the Jaipur- Agra Highway, the 2.8 km long tunnel is one of the breathtaking places to enjoy a ride. The tunnel serves as the entrance and exit points for Jaipur. The outside view adjacent to the tunnel is eye-catching flanked by the picturesque Jhalana Hills and grand heritage buildings. As you drive along the National Highway 11 and cross through the tunnel, you can immerse into the striking beauty of the place. Inside the tunnel, you can find beautiful and pleasing lights. Operational since 2013, it is a memorable ride to cherish through the tunnel.

The key feature of the Bhatan Tunnel in Maharashtra is its six lanes. The tunnel is operational since the year 2000 and is considered as one of the advanced and scenic tunnels in India. It stretches across a length of about 1.17 km the gorgeous Mumbai- Pune Expressway. The purpose behind the construction of the tunnel was to reduce the travel time and distance between Mumbai and Pune. The view of the majestic Sahyadri range enhances the beauty of the place, perfect for a wonderful ride across the tunnel.

9. Z-Morh Tunnel in Jammu and Kashmir

Expected to complete by the year 2021, the under construction Z- Morh tunnel in Jammu and Kashmir is expected to serve multiple purposes. Stretching across a length of about 6.5 km, the tunnel will connect cities of Srinagar and Kargil in the Ladakh region. Establishing connectivity throughout the year irrespective of any weather conditions is one of the vital reasons for the construction of the tunnel. Promoting social and economic development and boosting tourism are the other strategic objectives. Located near the Gangir region in Ganderbal district of Jammu and Kashmir, it stands at an elevation of 2637 meters above sea level. The tunnel has earned its name from the Z-formation between Gagangir and Sonamarg.

Kuthiran tunnel in Kerala is one of the longest six road long tunnel in the southern part of India. Stretching across a length of about 1 km, it is a twin tunnel. Located along the National Highway 44, the tunnel is expected to decrease the travel time and distance between Kochi and Coimbatore. Furthermore, the connectivity between the states of Tamil Nadu and Kerala is also expected to improve. One of the tunnels in the Palakkad Thrissur direction has been opened for public on July, 2021. The drive through the tunnels will be fun and thrilling as it overlooks the exotic Peechi-Vazahani wildlife sanctuary.

The Indian brainpower is constantly working on, innovating and designing some of the magnificent and technologically brilliant tunnels in the country. Its a boon for the travelers, offering them opportunities to enjoy a jolly ride across them. Besides the tunnels serve as the connecting mechanism for numerous travel destinations faster and quicker.