Germany has always impressed me with its grand castles and their amazing locations. Sometimes they are located at a very high location overlooking pretty towns, at times on the top of a hill amidst mighty Alpine ranges whereas some sit in the middle of dense forest.

All of these castles have amazingly interesting stories and unique architectural excellence. This excerpt will take you through these castles from the fairyland of Germany through photographs and my experience there through brief writings.

This is the first castle I have ever visited in Germany. Back in 2013, I was in Bonn for a couple of weeks and I had reserved one of the weekends for a short trip to this amazing beauty by the Rhine. You can reach the Konigswinter station just with a local Strassenbahn number 66. From there a short hike or a mountain train would take you to the top. The castle is very well placed overlooking the beautiful Rhine and suburbs of Bonn. It was built in the early 19th century and that too in 2 years, hence it's history is also a very modern one. The interiors of the castle or the palace (because it was built as a a private villa for financial broker and banker Baron Stephan von Sarter, who planned to live here) was pretty gorgeous and interesting was it's view from the top is minblowing.

Recently, I was again here, but this time the plan was to capture the biggest and the brightest supermoon of 2022, the Buck moon. Trust me after a wait and planning when the moon appeared from behind the mountain it was nothing less than a sun rise. Unluckily the there was not much light in the castle but the view was something that the castle can boast upon.

Here are some images of this beauty from all unique angles and time of the day and year I have witnessed. 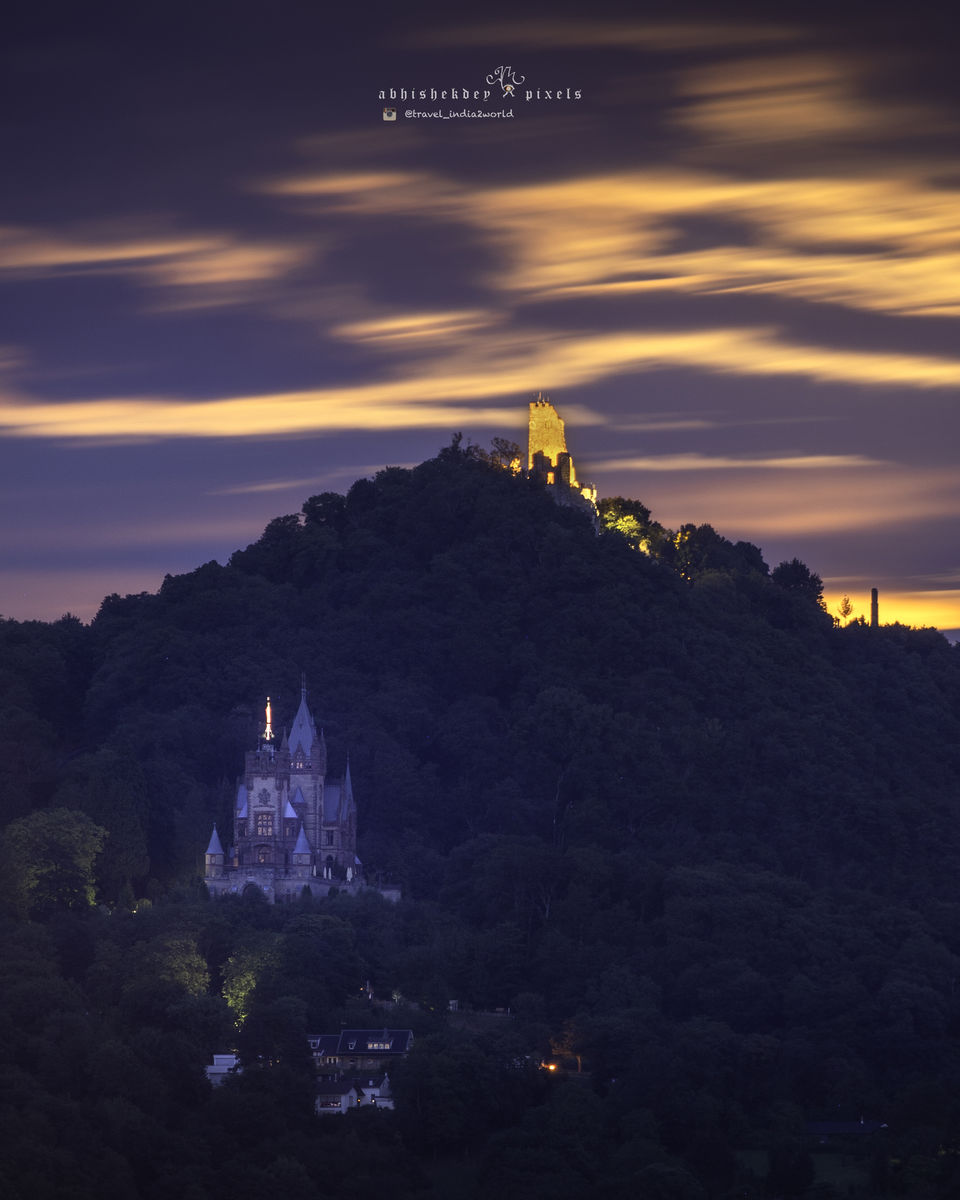 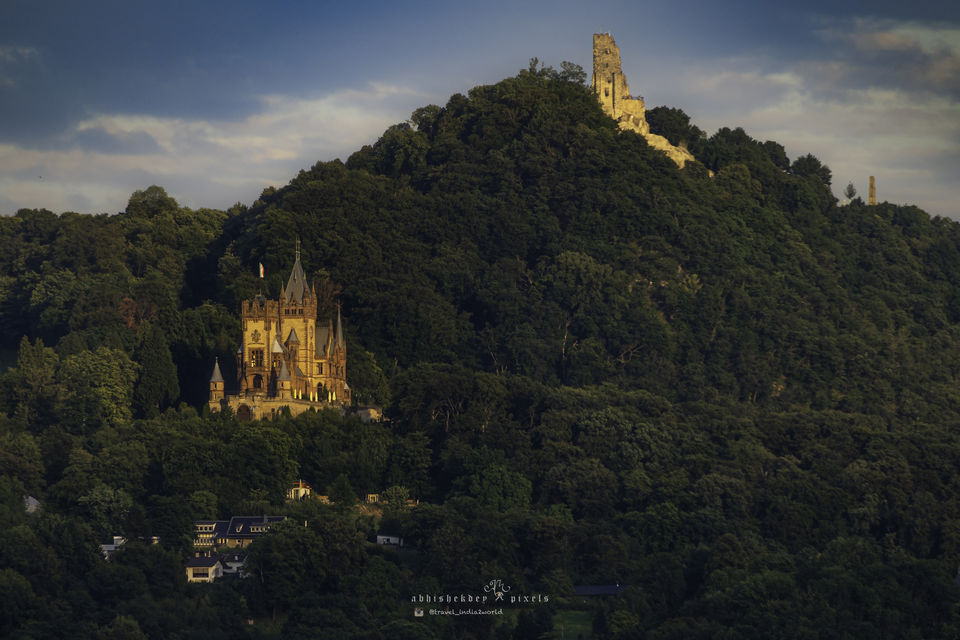 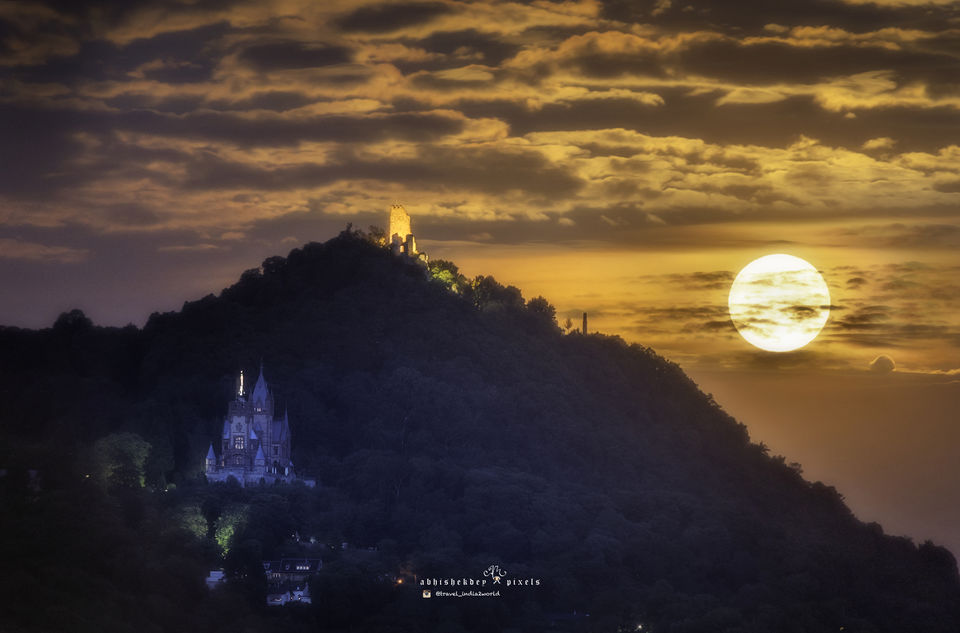 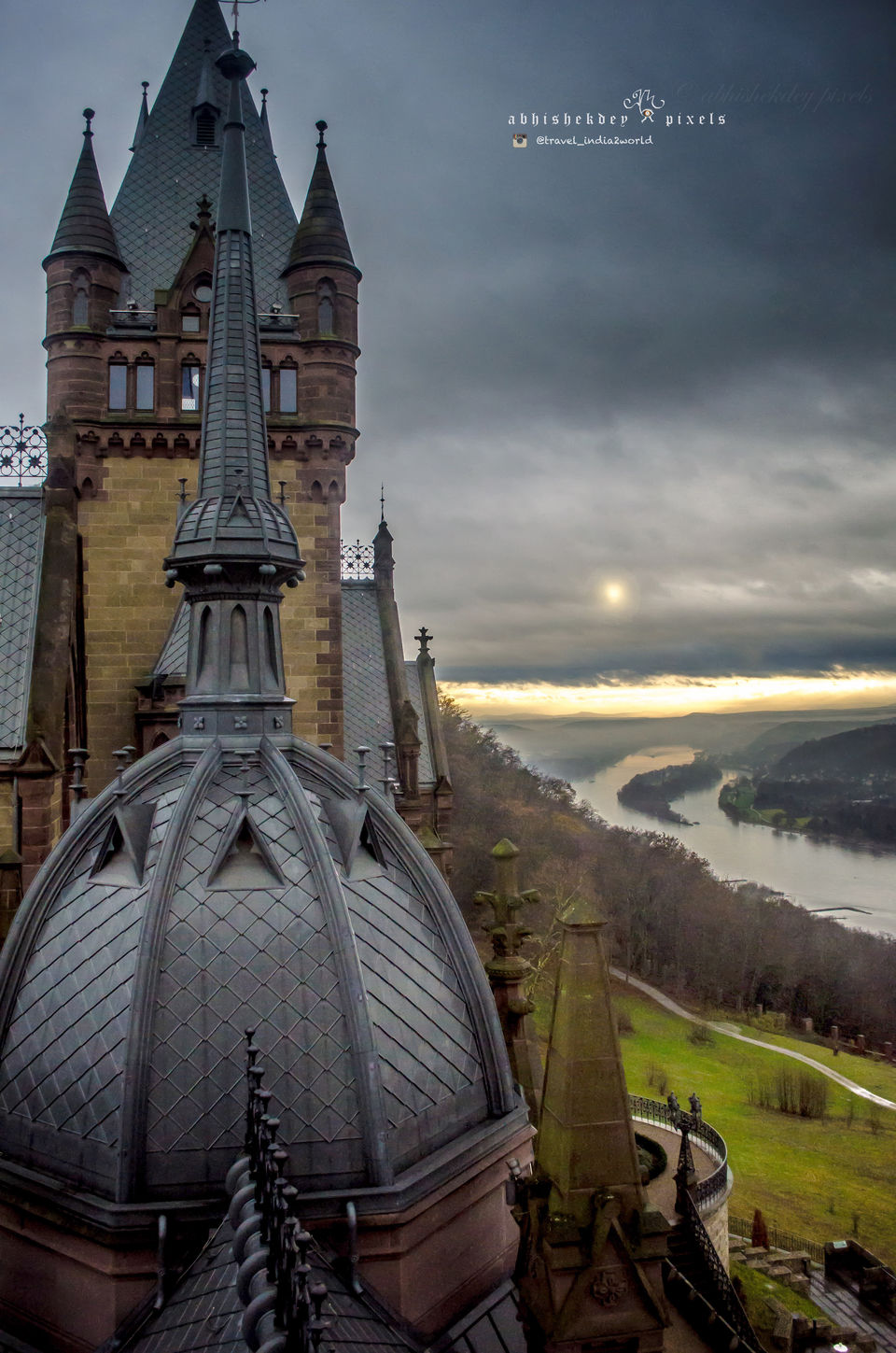 It was the 1st day of May 2018 and I had the day off. I am not a person who wastes a day break sitting in the couch, at least in a new place and if I am not that physically tired. I took a night bus to Koblenz and then took a train to reach Cochem at around 3 am in the morning. I wanted the whole day starting from the sunrise and come back to Dusseldorf by evening, so that I can take a sound night's sleep before restarting the 8-6 work routine. But, for Cochem, my planning went a bit wrong. I thought I would a have waiting hall in Cochem or some food junctions where I could have some snacks and some beer to spend the 2 hours before I enjoy the peace of sunrise. But Cochem train station had only a stair facing the main door which had the Moselle river was flowing by in the opposite side of the road. Trust me, even in May, I never thought the cold breeze through that door would freeze me. I even thought of getting a room but at that time there was nothing I could do. I somehow spent those 2 dreadful hours with pain and then my time began. First the blue hour from the riverside and then hiking up the terrace grapes farms. I took a short cut but it turned out to be an unorthodox climb. The beautiful Moselle river, small and cute Cochem town and the handsome Reichsburg Cochem Castle, I could watch this view for long with all appreciative adjectives. I sat there overlooking all these and enjoying the view with the first fresh light; what else can be more peaceful. The hardship of the 2 hours was all gone in a few minutes. I spent a good day in the town with some food wine and hike up to the old fort which was a few kilometres away on an adjacent hill and at last took a guided tour inside the castle. I, of course, do not remember all the details of the stories of the castle but the location of the castle just overlooking the Moselle river and the vineyards around; it was a motif of luxury for the then King Louis. The Moselle region unlike most of Germany was wine producing and wine loving. As a memento, I took back a bottle of wine and a pair of beautiful creative handmade wine glasses.

Blue hour reflection of the pretty city of Cochem 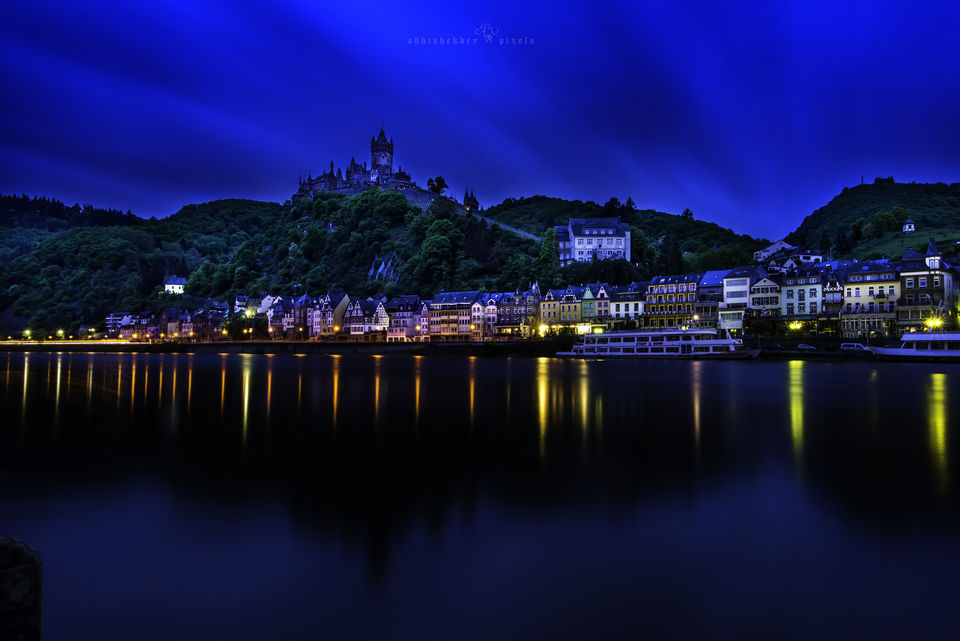 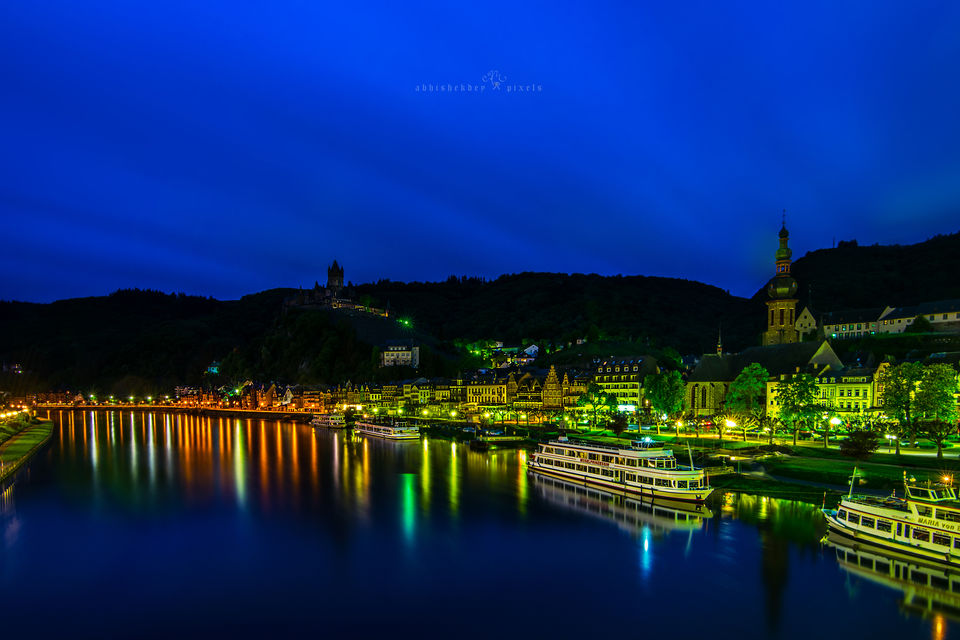 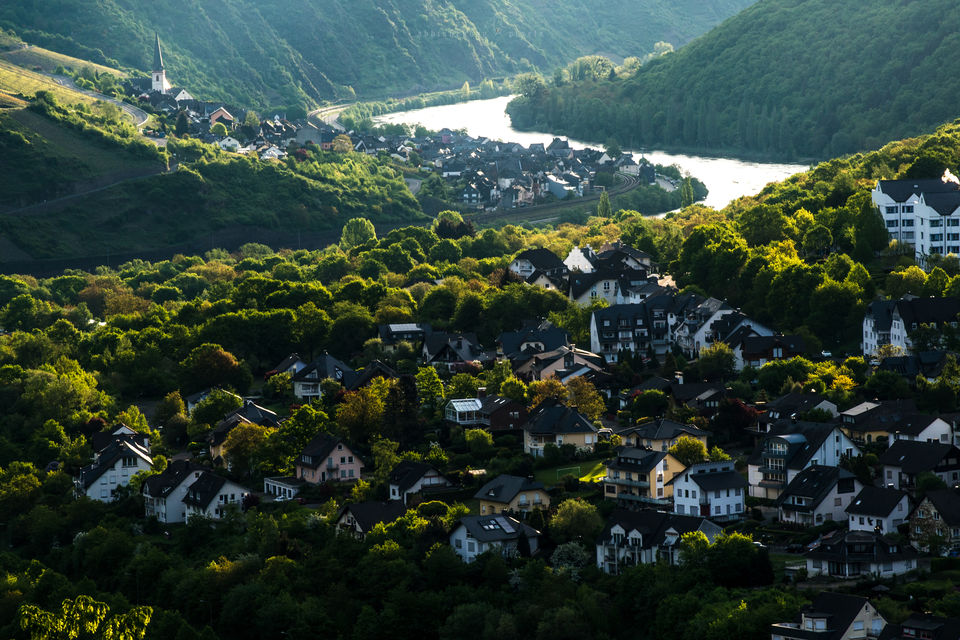 Beautiful Moselle valley lit up with the first light 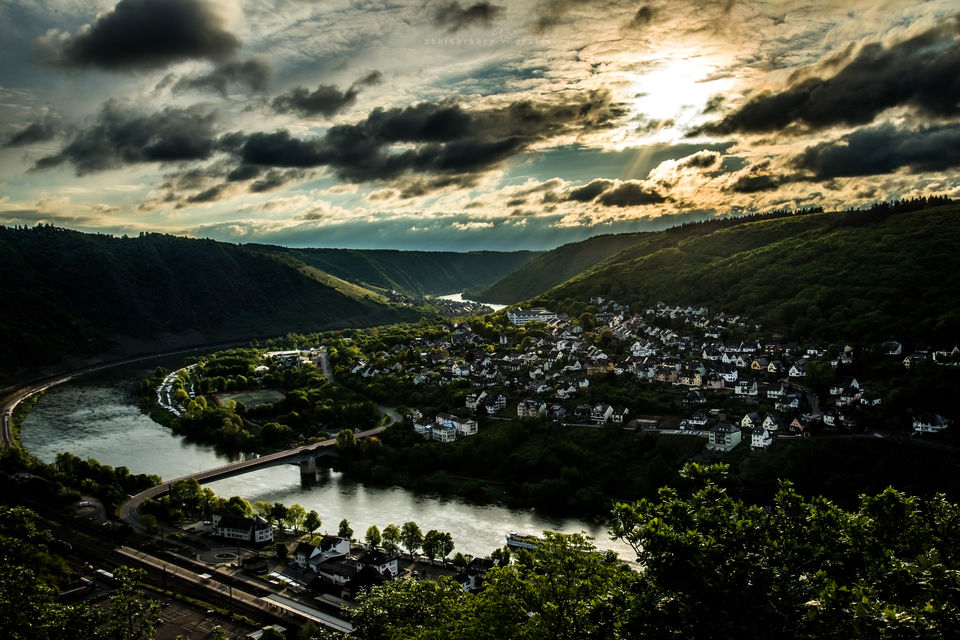 View from the balcony of the Reichsburg Cochem Castle 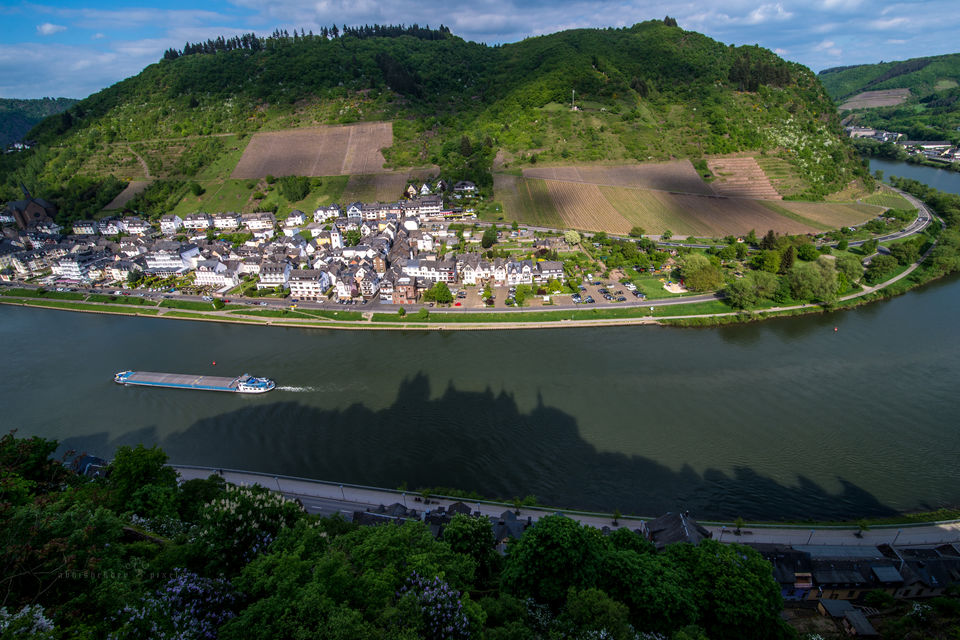 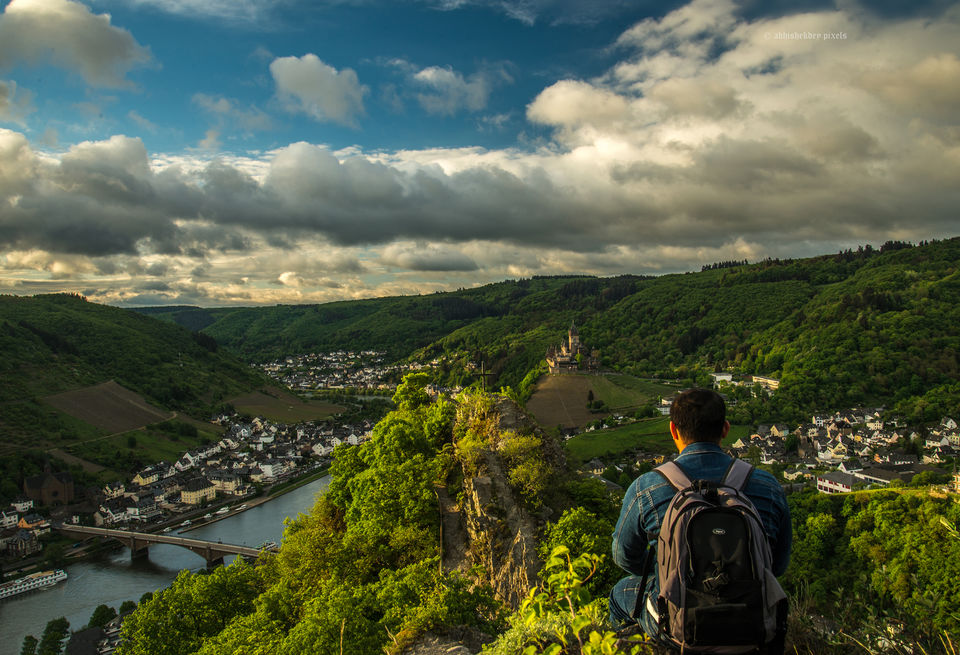 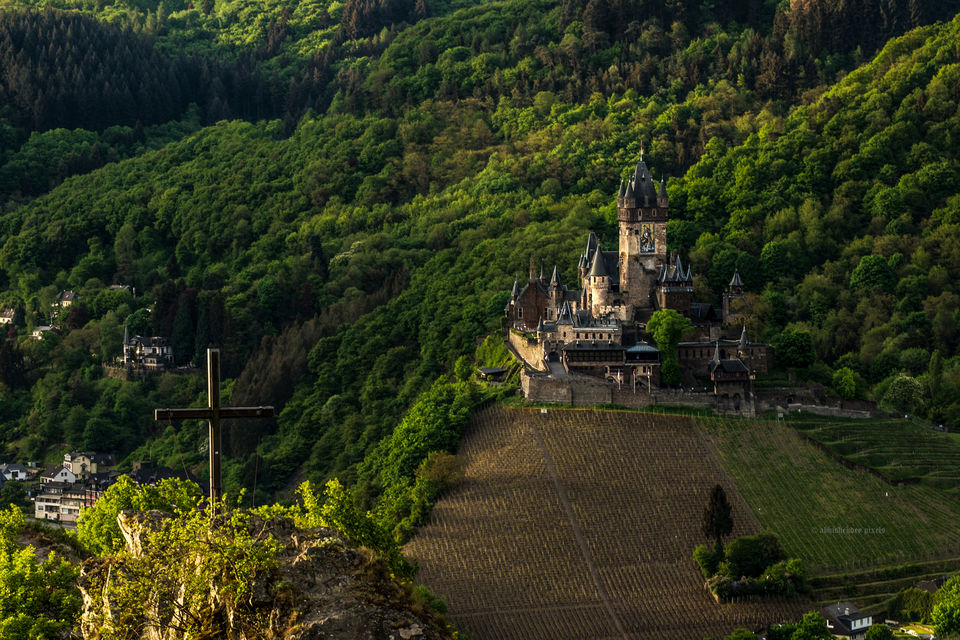 The Old Fort on a distant hill 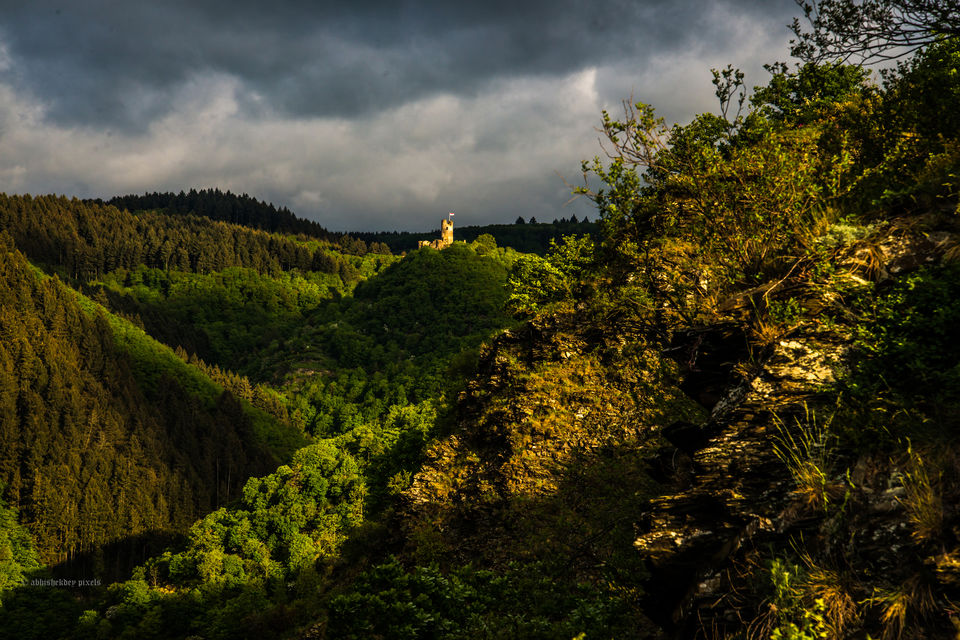 This is one castle I would love to visit again and again in different seasons. I have already visited this beautiful castle twice. Often referred to as the original Cinderella Castle, it comes straight out of those fantasy stories we have been reading in our storybooks or have been watching and wondering in our cartoon or fantasy shows.

Situated overlooking the beautiful Bavarian village called Fussen the castle is situated in the elevated hamlet of Schwangau and is surrounded by even higher Bavarian Alps and beautiful glacial lakes.

My first visit was four years ago during the winters when it was all clad in white snow and the castle looked nothing less than a real-life Disneyland castle.

During my next visit, the castle looked totally different surrounded by lush green landscapes and bright and lively sun. The last time I had missed out the famous Marienbrücke and how the castle looked spellbound from it so this time I made sure I am there.

During the winter I took a train from Munich and even the journey was fascinating as if the train was cruising through a white desert. From the Fussen train station, a bus took us directly to the foothills of the mountain that take the pride of being crowned with the beautiful castle. A walk of 2 kilometres to reach the castle was quite easy due to the weather, unlike the next time when it was the peak summer and the sun was scorching hot and bright making every meter hike a tough job.

The next time I intend to again travel during the autumn when the orange colour of the fall gives the castle again another new look. Hope I make it soon. 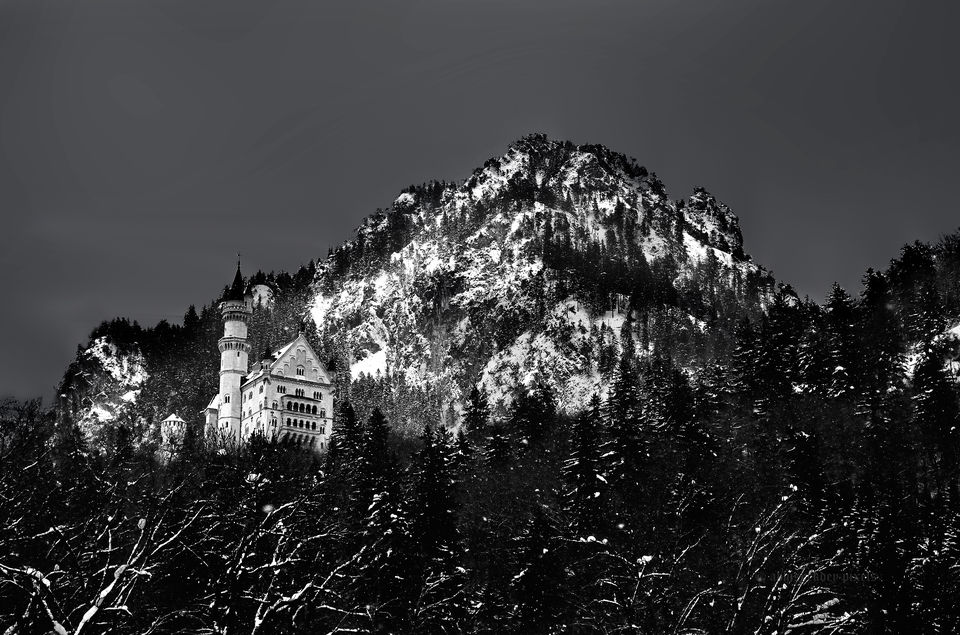 Neuschwanstein Castle: Straight out of the sets of Disney 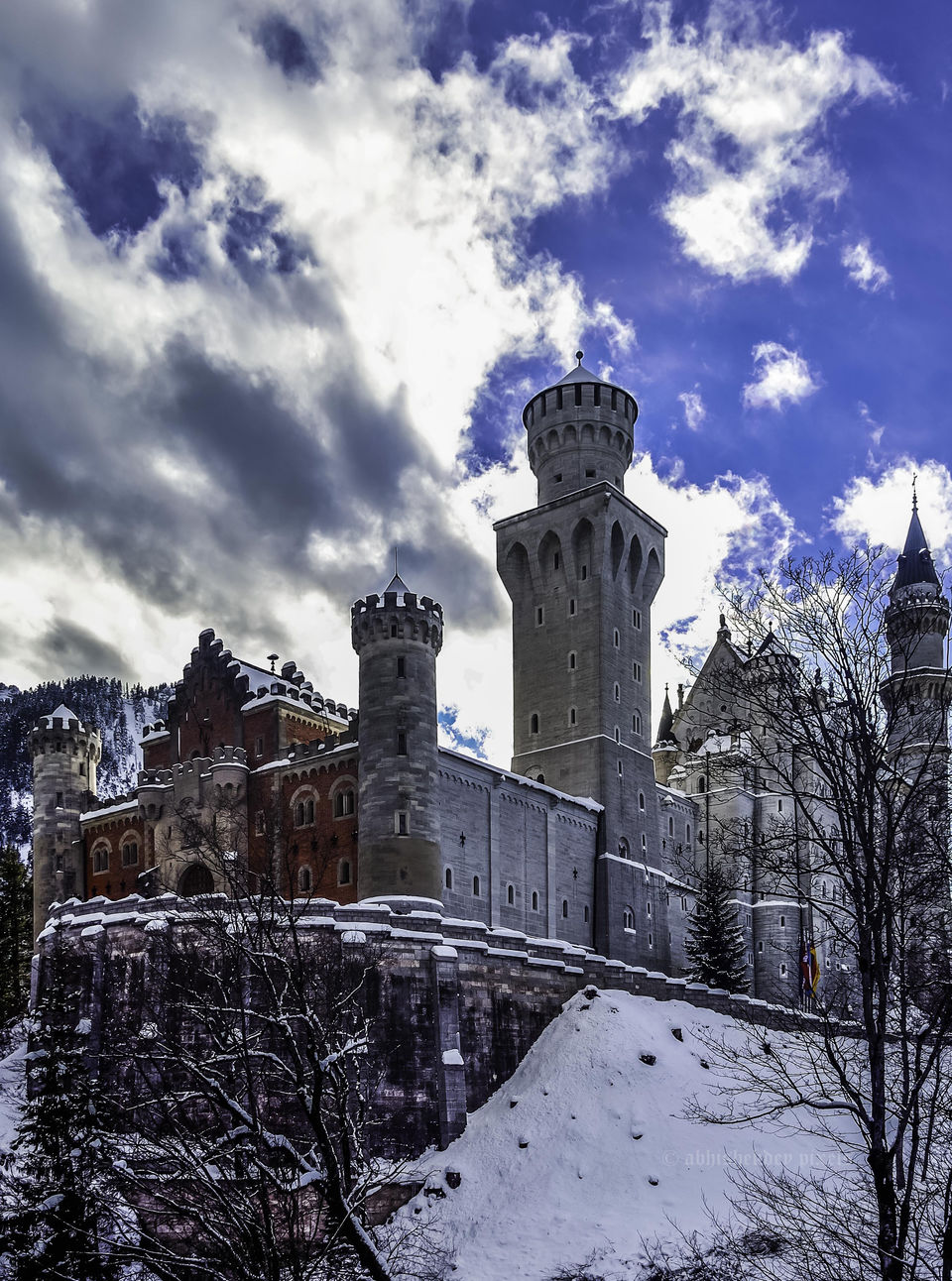 The Neuschwanstein Castle from the Schwangau village 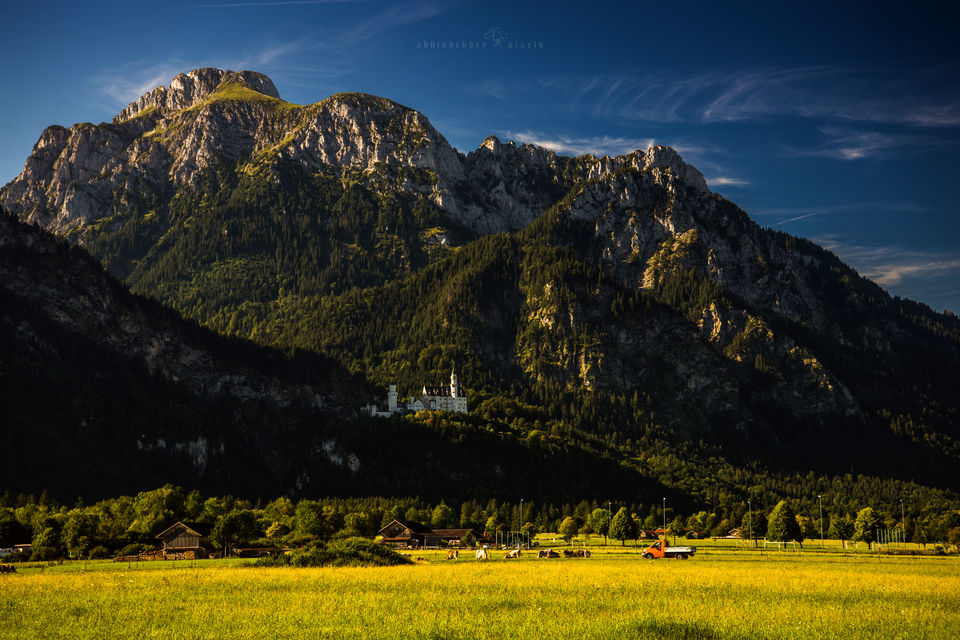 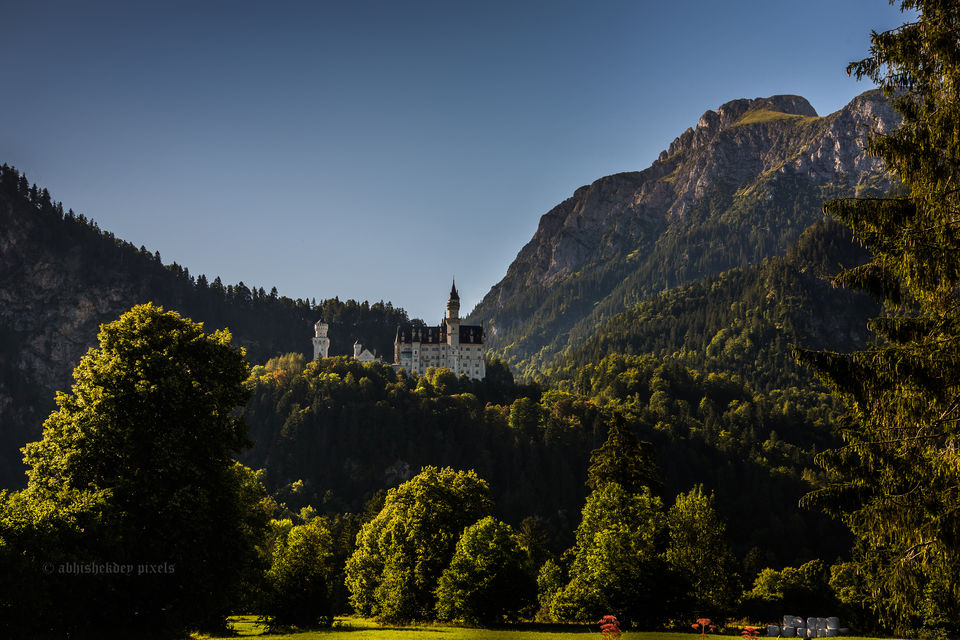 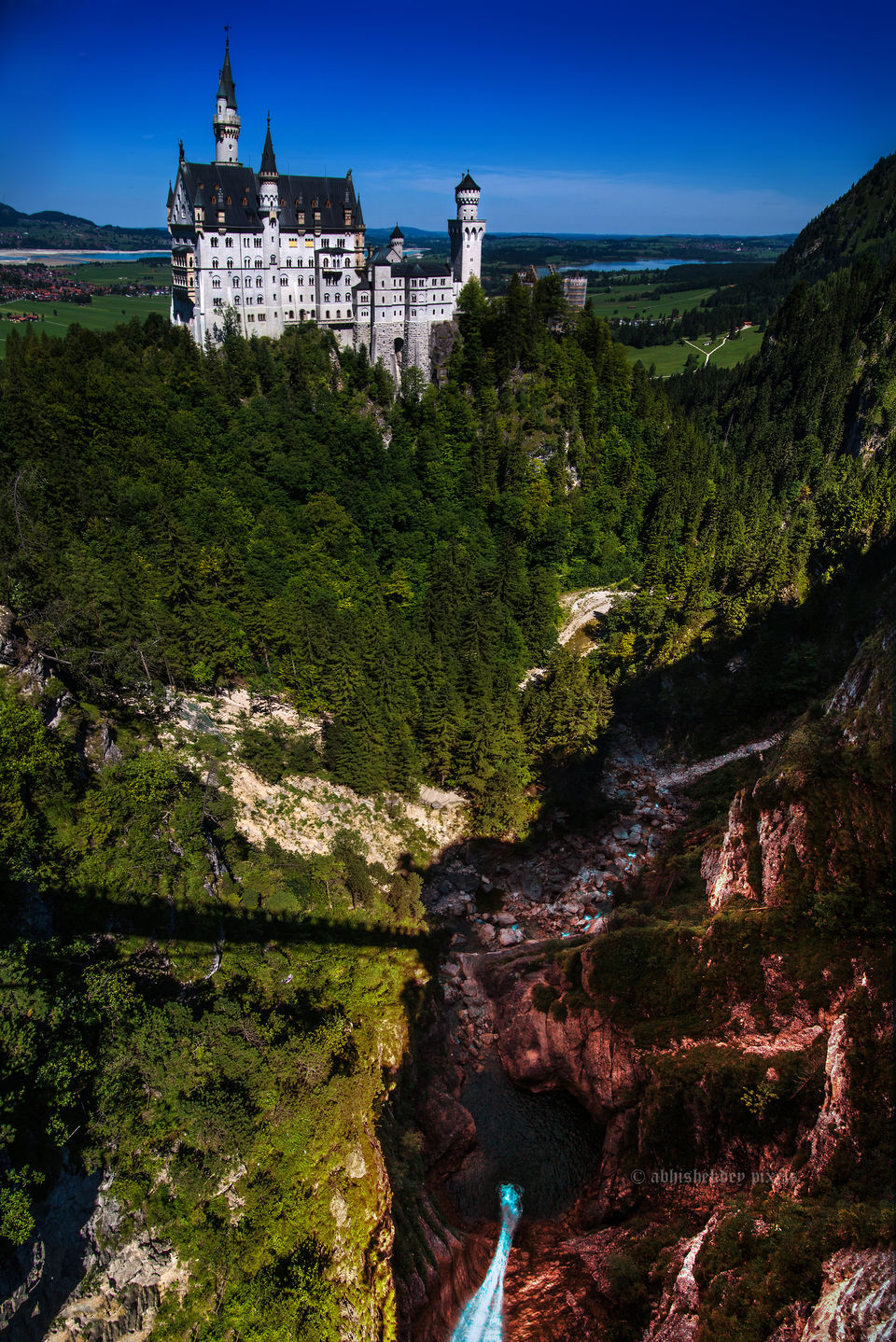 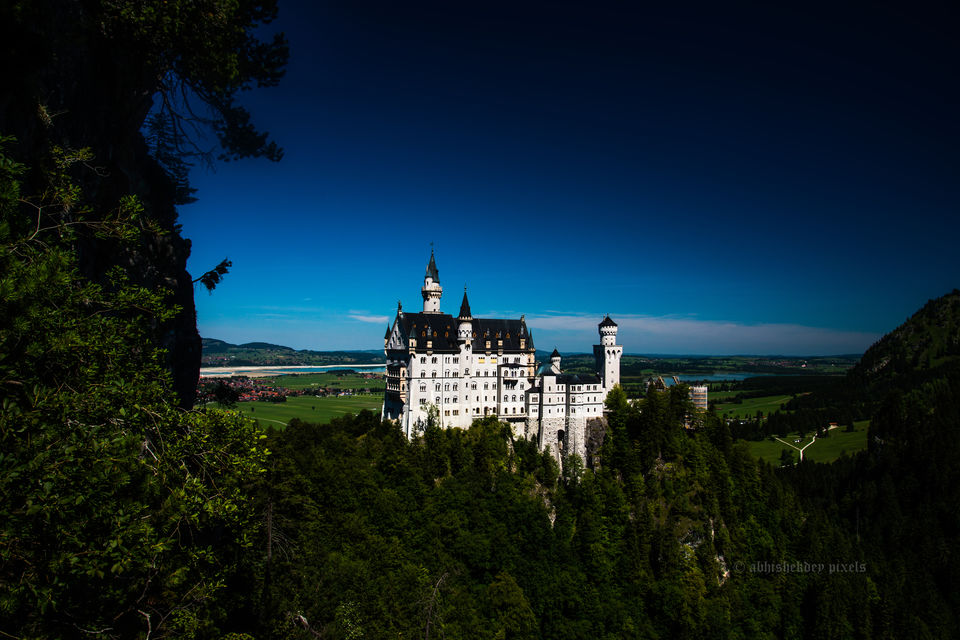 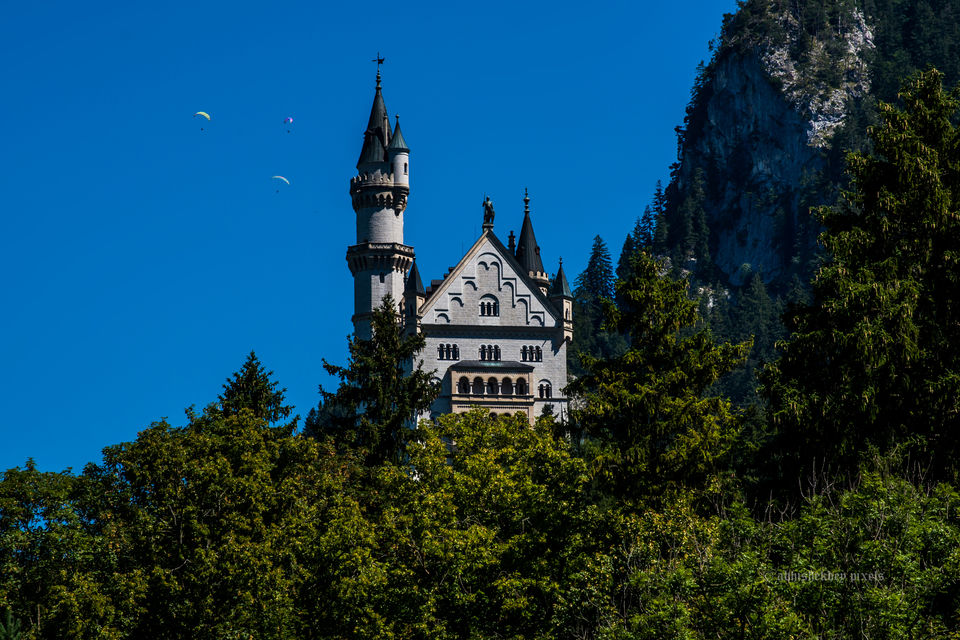 The Hohenschwangau Castle, The Alpsee and the Schwan See behind the Neuschwanstein; taken from the way to Marienbrücke 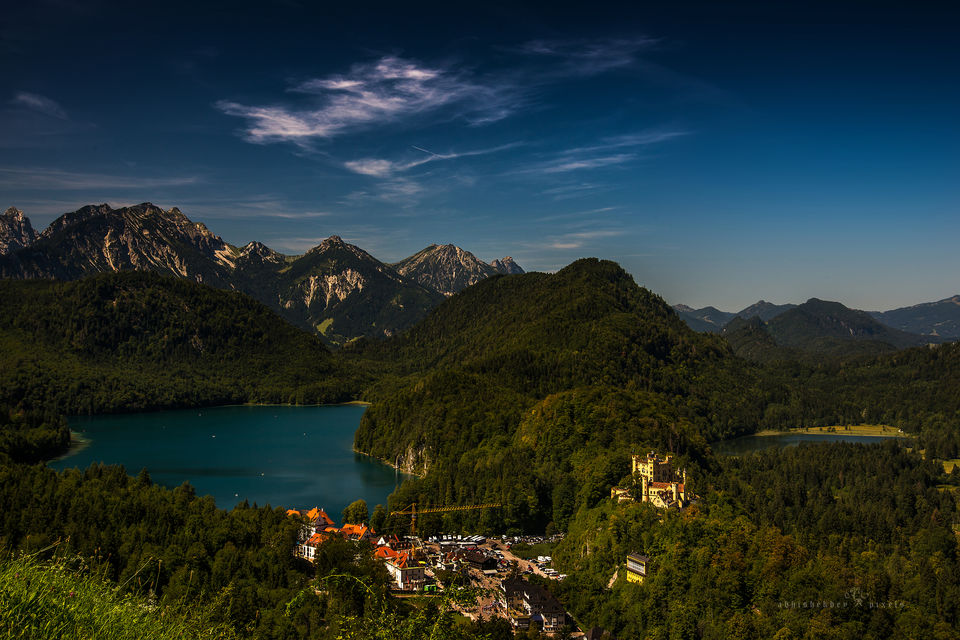 The pretty St. Georg church from the Neuschwanstein Castle 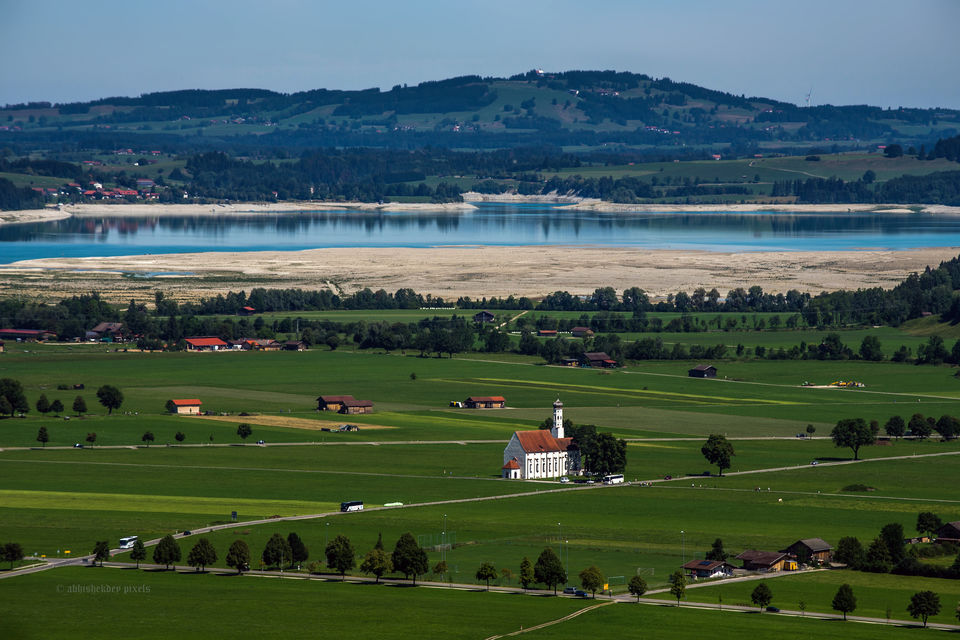 I was in Dusseldorf for quite a long time. In my initial days, I didn't try driving in Germany that much, so had quite a lot of dependency on public transport. There is a reason why I start the trip to the beautiful Eltz Castle in this fashion. No, it's not because it was within 200 kilometres from Dusseldorf nor because it was one of the most beautifully located castles of the Deutschland but because this was one of the craziest trips I ever did.

It was one of those fine weekends. I took as Flixbus in the morning from Dusseldorf and again from Koblenz took a train to Hatzenport. From Hatzenport, a bus(which comes every 1 hour) took me to this beautiful German castle.

It was nestled with the dense forest in between Wierschem and Moselkern and had beautiful stories about three families who used to reside within the castle. Interestingly descendants of one of the families still stay there and only the rest of the part is open to the tourist in the form of a museum.

After taking a guided tour inside the castle and entertained by the interesting stories of the castle I had some beer and food in the castle restaurant. You must be wondering the way I started this section, there is still nothing crazy or unique I have described. Let's move deeper into the day. I hiked up an adjacent hill to enjoy the last light on the castle and trust me that was exciting enough since the trail I took was quite deep into the jungle and through the jungle, I had found an open space from which I can have an uninterrupted view of the beautiful castle.

Hiking up or walking in the forest is something many have done many times and I know this is not enough to do justice to the exaggerated introduction.

It was a clear day so what struck me is that the stars will be visibly dense and worth gazing at night. But for that, I had to stay the whole night in front of a closed castle in the middle of the dark dark forest. Initially at around 9 pm when the sun has already set quite a while ago, the thought that I would have to stay more 9 hours at least, all alone in this darkness was scaring the hell out of me. In Germany usually it is safe, I mean people are usually not that harmful but here it was an unknown jungle with no sign of human being. Although I had rested myself just in front of the castle in a bench, again I had no idea if any wild creature decides to take a stroll out of the nearby bushes to say hello to me. At around 10:30 pm another local guy, a photographer was there. Chatting with him about his experiences and his belief that no wild animals are expected in this forest gave me a sense of relief and confidence.

After a couple of hours the guy had left. By that time, we had captured some Astro and some beautiful time-lapse videos. After he was gone I kept staring at the stars for quite a long time before I started to feel a bit tired physically. I decided to take a short nap on the bench but it was quite cold and impossible to have a comfortable nap. I was foolish not to carry a sleeping bag and underestimating the temperature drop at night after the pleasant, warm and sunny day but on the other hand, was wise enough to carry a quarter of Jägermeister to fight the cold. With periodic naps and waking up to see a blanket of stars fading with time was an amazing experience.

At the end of the last nap, the stars had disappeared quite a lot; No! not because the sun had started to peep from beneath the horizon but the moon suddenly started to appear from nowhere behind the castle. At the advent of the dawn, a few photographers had started to flock and had taken respective positions to capture the first light on the castle.

I know, it was bit of madness but since I was dependent on public transport, I had no other option except wait for the morning train. Anyways this night would be in my memories with all possible details for quite a long time or maybe till my memory lasts.

In the morning I again had to walk a couple of kilometres to reach the Moselkern Bahnhof, from where my tired body didn't allow me wasting any moment and head to Dusseldorf for some rest. 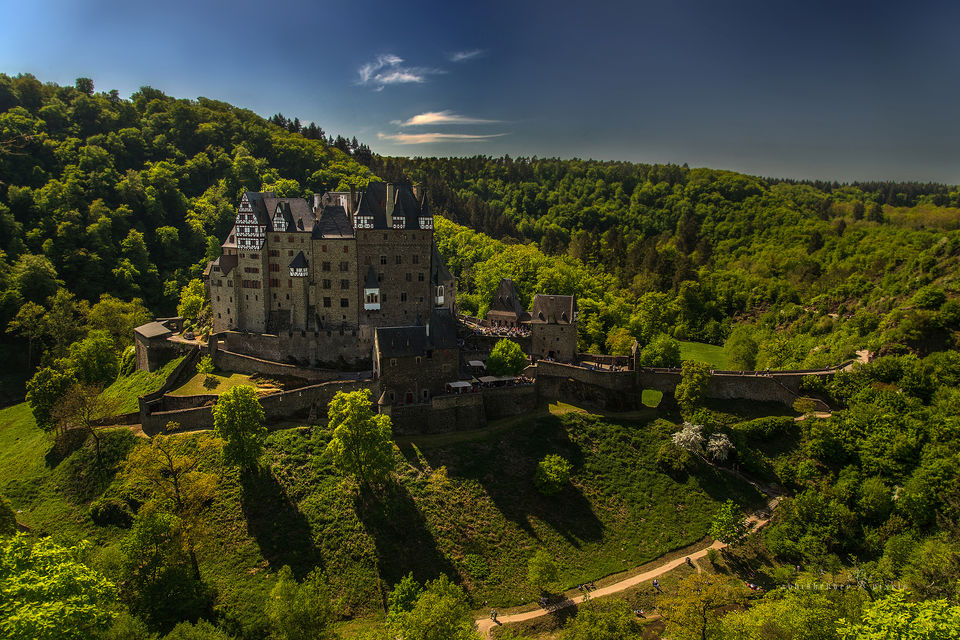 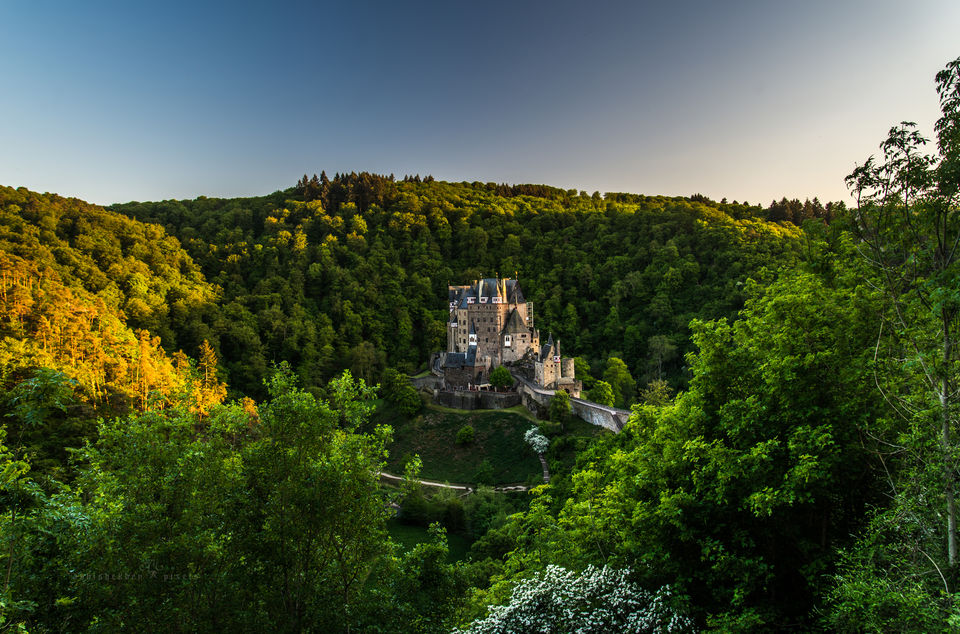 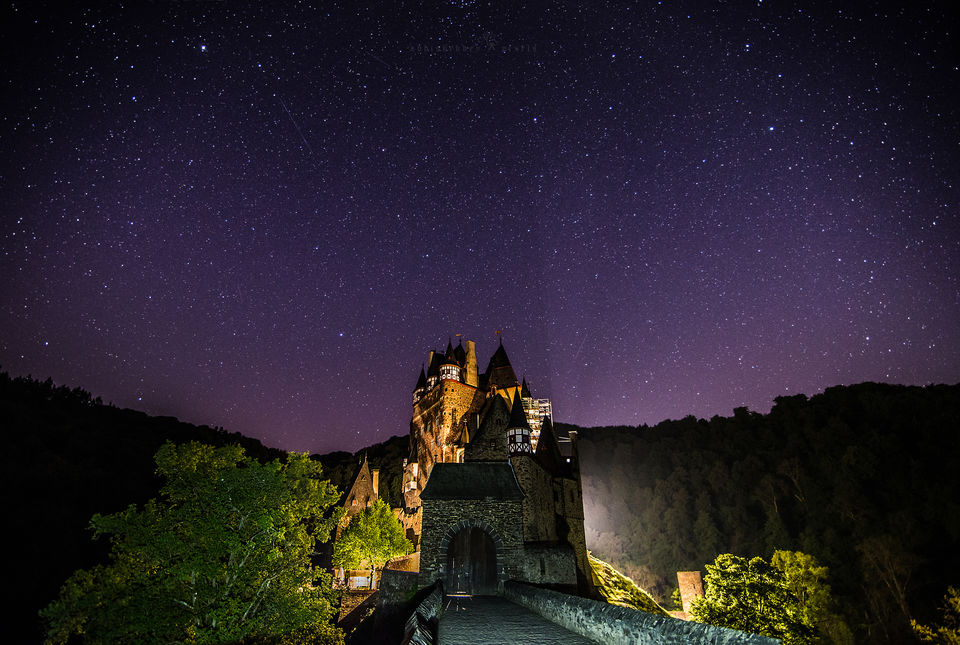 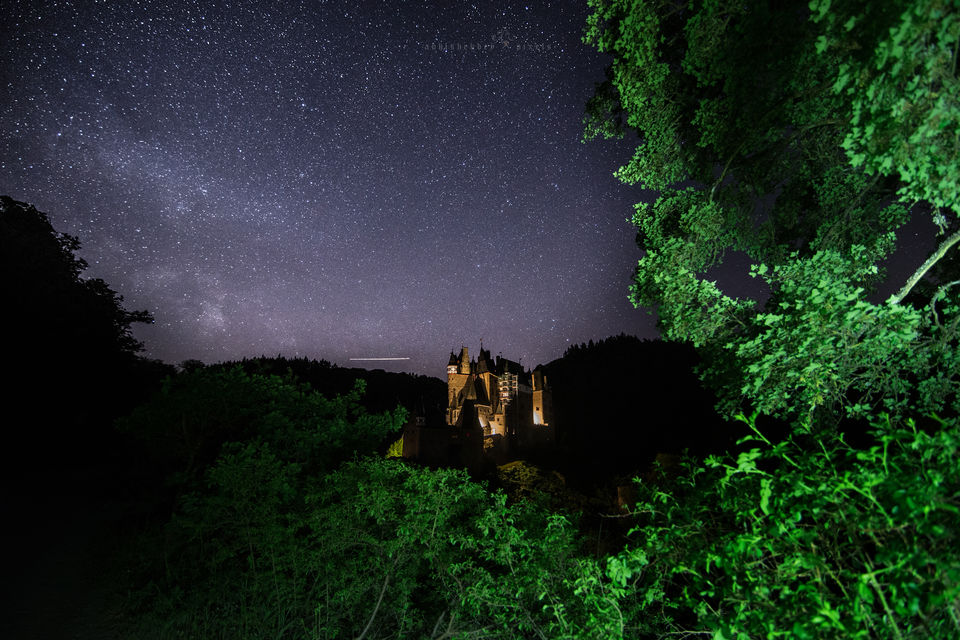 When my Spirit leaves me to a Fairyland 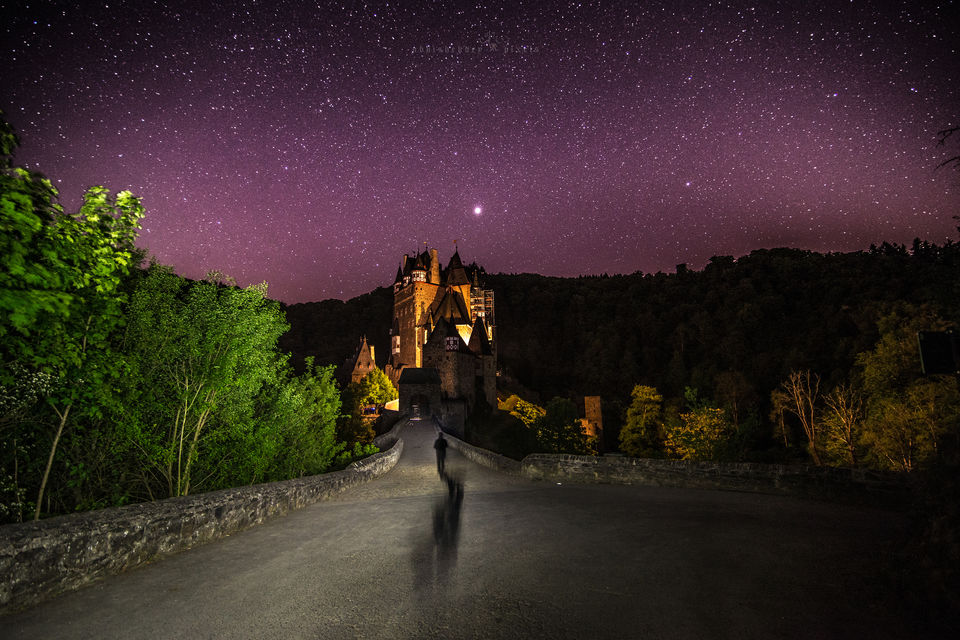 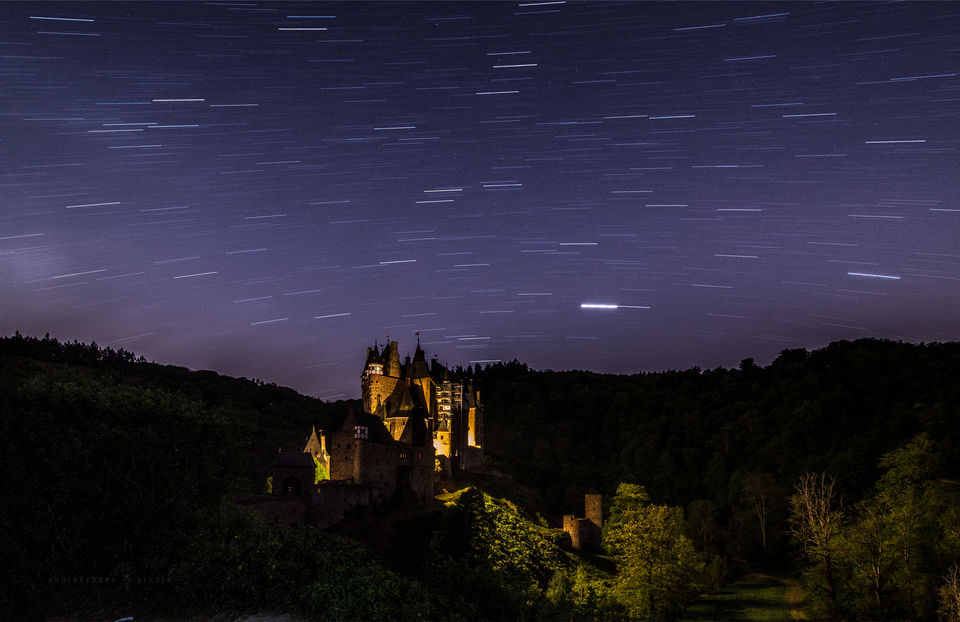 Moon suddenly appeared to rise from behind the castle 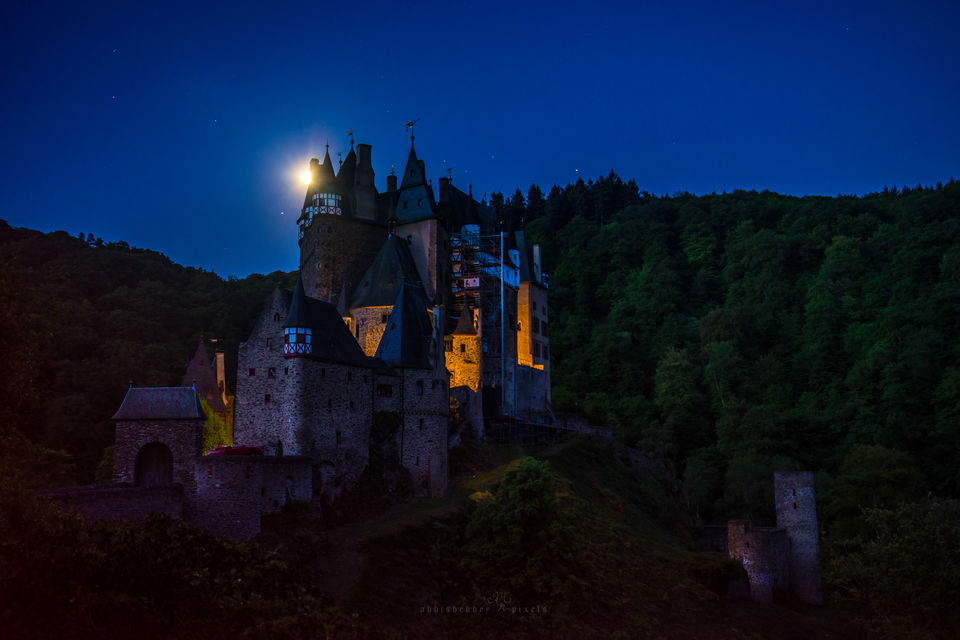 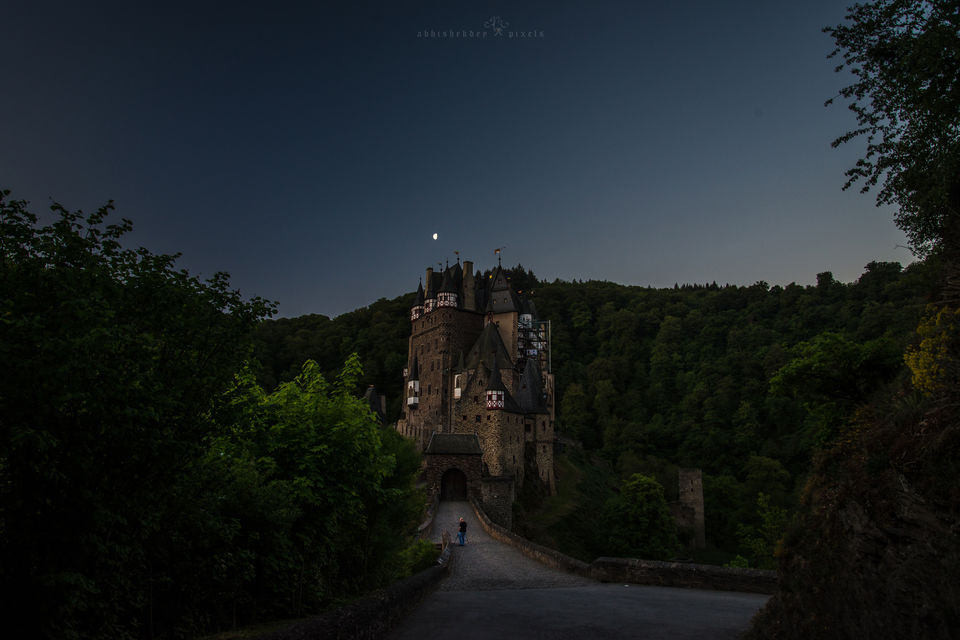 P.S. There are two more castles which are in my wish-list and I shall include them in this excerpt when I make it this summer.

Note: All the photographs and videos are the original works of and are solely owned by © abhishekdey pixels. Any commercial reproduction or usage without the concern of the owner is strictly prohibited.