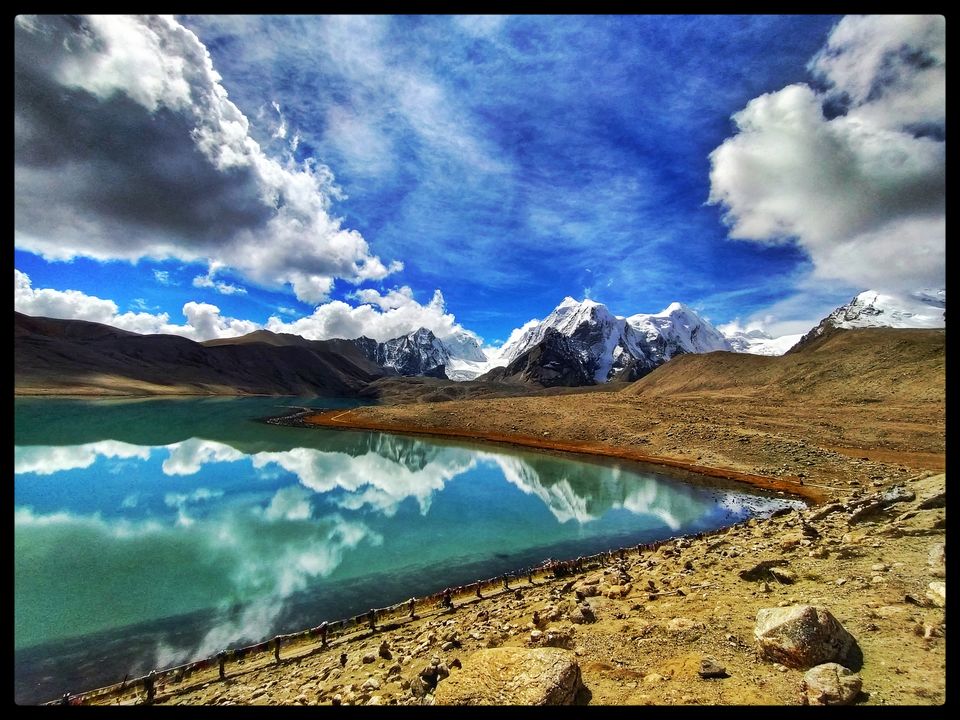 Gurudongmar is a high altitude lake close to Tibet border in North Sikkim. It is the land of Yaks, blue ships and other high altitude animals of Sikkim and Tibet. The snow-fed milky water of the lake is one of the major sources of Tista, the most important river in Sikkim and North Bengal.

At an altitude of 17000 ft, Gurudongmar is one of the highest lakes in the world. It lies in the Northside of the Khangchengyao Range and is encircled all around by snow-covered mountains, the sacred lake freezes during the winters except at one spot, which the devout belief has been especially blessed. The Chinese Tibetan border is just a few kilometres away from the lake.

The blessed water of the lake is believed to possess the miraculous power of granting children to issueless couples. Interestingly, the myth of Gurudongmar is believed as reverentially by the Hindus as by the local Buddhists.

Tour to North Sikkim requires a special permit (Inner Line Permit). Only Indian tourists are allowed to visit Gurudongmar Lake. For international tourists, the tour is limited to Chopta Valley a few kilometres before the lake.

The lake is located at an extreme corner of India. The nearest tourist accommodation at Lachen is 68 km (3 hours) away. A typical tour starts at Gangtok from where Lachen is about 120 km (6 hours). After an overnight stay at Lachen next morning, you may visit Gurudongmar. You should start early in the morning and be back to Lachen latest by lunchtime. As the day progresses weather in the high altitude begins to worsen.

The first phase of the journey starts at Lachen at 8800 feet and in next 35 km reaches Thangu at 13000 feet. As you gain altitude you will find the green forests of lower altitude gives way to smaller trees and bushes. Beyond Thangu is the second phase of your travel. The road towards the lake from Thangu passes through the high alpine pastures carpeted with occasional rhododendron bushes. One can get a prized view of rare Sikkim Rhubarb peeping through the bushes in inaccessible terrain or of a herd of mountain sheep grazing in the distant valley. In this area, you will find little vegetation or people. Apart from the Indian Army, there is no human habitation here. The gravel road through the valley gives you a unique view of barren land. Just before you reach the lake the road takes a right turn and goes uphill to reach the lake.

The terrain leading to Gurudongmar is very hostile and yet very beautiful. The land resembles Tibetan plateau, vegetation is very limited and the road is through a stony moraine-like unpaved path. Due to proximity to the Chinese Boarder, landmines are not uncommon and the presence of Indian Army is ubiquitous. Due to high altitude breathing problems may also arise. Tourists are suggested to spend less time at the high altitude and come down to Lachen soon.

Despite the hardship and difficulty, a visit to this lake may last as an experience of a lifetime.