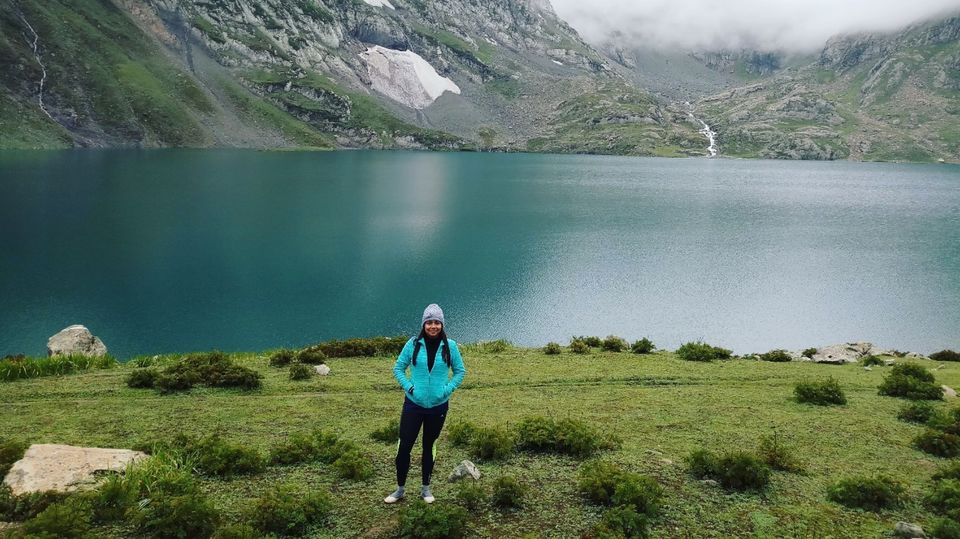 They say you should NOT do Kashmir Great Lakes Trek as your First Himalayan trek. At first I was wondering that is it because of the difficultly level of the trek or it is from the safety perspective but when I actually did that trek I got the answer. It's because if you do Kashmir Great Lakes Trek first then there are chances that you won't find any other trek so fascinating and scenic as this is the Most beautiful trek in India.

Kashmir's status of 'Heaven on Earth' is truly justified on each day of Kashmir Great Lakes Trek. Turquoise Alpine Lakes are the major attraction of this Trek along with different valleys & rolling meadows surrounded by huge mountains. Every day you'll find incredible views that resemble the Desktop Wallpapers. The best time to do this trek is between July-September as the greenery and blooming flowers are at their best during this time.

KGL Trek was my first Trek where I had absolutely No Network - No internet, No calls for 10 days altogether. As the Trek progressed I realized that being off the grid was actually a boon. The further I got off the network the deeper I was able to connect with the wilderness - the mountains, the lakes, the meadows, the sky, the clouds, the forests and so much more. I had started noticing every minute detail of the surroundings which the beautiful nature around me had to offer which I would have missed otherwise while being busy on my phone in case the network was available.

When we started KGL Trek on the first day the sky was clear and the weather was good but on the second day it seemed like a battle for survival. It had started raining very heavily and the pressure of the wind was tremendous. When the rains eventually stopped and we reach the next camp I realized that the true value of calmness can only be understood after a Storm. Once you learn to appreciate both rains as well as the Sun in equal measures that is the time your whole trekking experience starts becoming wonderful.

All the hardships faced on the trail suddenly disappeared when I had the first glimpse of Vishnusar Lake. I was completely taken aback by the spellbinding beauty of this Lake. You can never get tired of watching the sparkling water in the sunlight and the small streams from the melting glaciers on the adjoining mountains quietly flowing in the lake.

After climbing 13,400 feet all you see is clouds with zero visibility. Yes it is disappointing at first but then you need to be a bit patient and wait for the clouds to pass through. As the clouds started gliding the incredible view was slowly unfolding. The whole effect was like the raising of curtains before the beginning of a fantastic play. Finally we saw the two Twin lakes - Gangabal and Nandkol with Mt. Harmukh standing proudly overlooking these beautiful turquoise lakes. Sometimes I wonder that would this have looked as beautiful as it does now without this blanket of clouds? Every painting becomes a piece of art when there is that special touch by the artist and just like that in this canvas painted by Nature the clouds definitely gave that special touch.

On one of the beautiful mornings of the Kashmir Great Lakes Trek before we woke up we could feel little movement around our tents. We thought that it might be the mules grazing near the tents. When we stepped out of the tent there was a spectacular moment of wonder and astonishment when we saw the entire Campsite was occupied by more than a 1000 Sheep. I couldn't move for few seconds and the only words I could utter was 'Woah… Is this Real?'

While camping at the Satsar Campsite, which is a collection of 7 Lakes you can also do rock climbing. This place is so calm and peaceful and indeed it makes you feel that you are on top of the world.

Finally on this trek I had the best experience of my life. It was one of the clear sky nights when we were camping near the Gangabal Lake. As it was our last night of the Trek we were awake until 12PM and were outside our tents for Stargazing . I had never seen so many stars in the sky before. It was like there was no empty space left and we could see the milky way and all the constellations so clearly. Suddenly my friend pointed out that there was a shooting star and since it vanishes in a fraction of a second I couldn't see the first one. Then we were closely observing the stars and I was praying a lot for another shooting star. After waiting for some time I finally saw it. It was magical, my eyes were wide open and for few seconds I was in a state of trance. The most beautiful moment of my life is not captured in a camera but imprinted in my memory.

Not only the beautiful views but also the beautiful people played a major role in making the whole trekking experience so memorable. Sharing some small instances of great gesture.

The first was related to sharing food. I hate Okra and we had that for lunch on one of the days. When we stopped at a local hut those people saw that I was not eating my lunch. I told them about issue with Okra and with some hesitation they offered me the local plant's dish which they has prepared. It was absolutely delicious and the important thing was that even though they had prepared that in so less quantity still they happily shared it.

The second incident was with my lost camera. At one of the resting points I had dropped my camera and I realized it only after reaching the next campsite. When I informed the Trek leader he said that he did talk to the local porters and someone has picked it and that I'll get it back. I had no hopes of getting it back as I was wondering that how would they track it down. I was completely amazed to see that these guides and porters have such a strong network even in the absence of cellular network when my Trek leader handed me the camera on the next day. This clearly showed how pure hearted and honest these mountain people really are.

The last instance was at the Indian Army Check point. Since it was 15th August the Army folks had special Onion Pakoras prepared for themselves and it was such an overwhelming gestures when these people shared that with every trekker that came to the check post. Having hot Pakoras in cold rainy weather was a bliss.

Last but not the least only the following Kashmiri Song - 'Hukus Bukus' lyrics can truly describe my feelings throughout the entire Trek:

Meaning - For when the breath that I take in reaches the point of complete purification.

Meaning- It feels like my mind is bathing in the water of divine love.

Meaning-Then I know I am like that sandal wood which is pasted for divine fragrance symbolic of universal divinity. I realize that I am, indeed, divine.