On the trail of the elusive Fishing Cat (Coringa Wildlife Sanctuary)

The early morning safaris are the best for birding as well as catching the elusive fishing cat. Insist on a good local guide while booking your safari 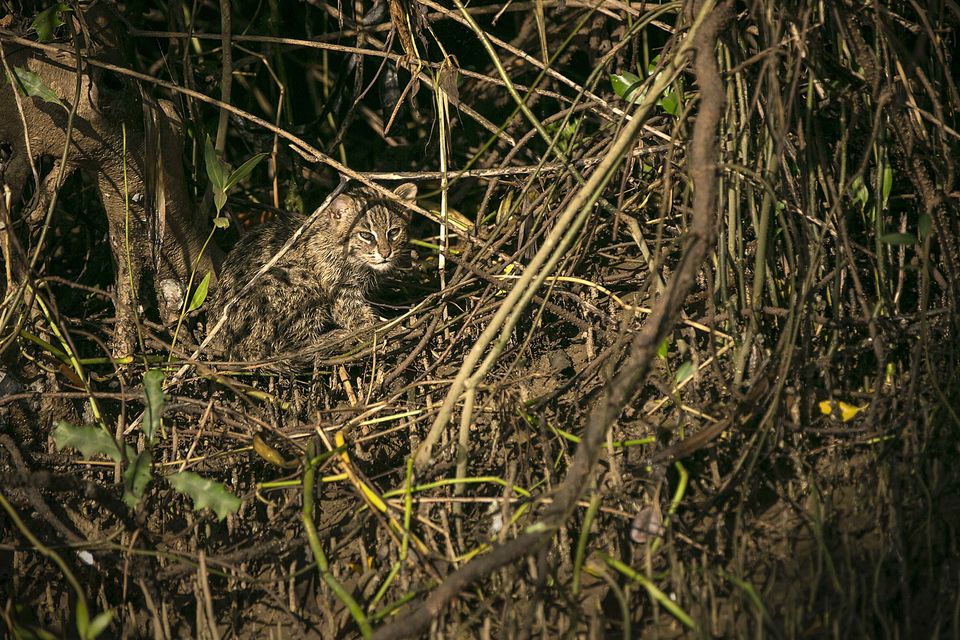 My love for wild cats was triggered on my first trip to the forests of Central India. That first sight of a majestic Royal Bengal Tiger walking through the undergrowth, was the beginning of a lifelong affair. There is something intensely alluring about the Panthera species, that makes wildlife lovers like me go back to the jungle at the first possible opportunity.

There is no doubt that the tiger remains the star attraction at major parks, but then the smaller more fascinating cats miss out on the attention they deserve. As I educated myself about other members of the Panthera family my fascination grew for the lesser known, more elusive felines.

The fishing cat, just by its name sounds like an intriguing species. At home in wetlands like mangrove forests, it is one of the most difficult species to spot, as much for its small size as for its beautiful camouflage.

Having chased wild cats for a decade I had a fair idea, that going with any expectations to watch a elusive species was a futile exercise. So when I arrived to explore the second largest mangrove forest in the country, at Coringa Wildlife Sanctuary, I was more focused on birding then looking for the Fishing Cat.

The best way to explore Coringa is on a boat, so we were up way before sunrise to catch our ride for the day. The sky was slowly brightening up as we put on our life jackets. Shortly the engine revved up and we were on our way cruising over the Godavari.

Our guide Ramesh had been with the forest department for over a decade and knew these mangroves like the back of his hand. Half an hour onto the ride, the sun was up and the mangroves on our left were bathed in nice golden light. Soon the resident birds began to appear. The unassuming Pond Heron was the first to catch light. Then as we moved ahead we saw a Common Kingfisher perched meditatively on a log in the middle of the river.

Unlike the parks on the mainland, with its big game and vast open spaces, here excitement is served in small doses. You’ve got to embrace the solitude, get used to the sway of the boat and pay attention to the slightest of movements in the under growth. You’ve got to savor the fleeting moments the forest opens up to you. So, in tune with that we turned off the engine, sank in our seats and tired to soak in the surroundings.

A couple of minutes later I heard a Kingfisher call and soon caught sight of it on a nearby branch. An Open-Billed Stork soared over us and as our boat drifted ahead, a Brahminy Kite came into view on a far branch. While we were busy taking shots of the Kite, without any warning, Ramesh croaked up the engine and pushed up stream. He whispered that he had seen some movement in the bushes. I scanned the shore but could not catch anything. We cut the engine and fixed our eyes on the shoreline.

Then what seems like a few minutes everything was stood still. The breeze had died down, so there was no movement in the leaves, an occasional bird call broke the silence in the background but nothing moved in front of us. Slowly the boat kept drifting with the flow but we managed to keep it close to the shore. Then just about when we thought we had missed our chance, we saw some movement to our right. The patch we were looking at was in shadow and the creature in the light olive-grey coat kept moving under the cover of the mangroves. Anticipating that it would emerge in the sun a little down stream, we pushed on. It was game of patience now. A few moments later a captivating set of eyes emerged from the bushes. It was indeed a Fishing Cat. But it was in mood to pose for us and before I could get a clear shot it went off back in.

Amid all this commotion we had completely missed to notice that the mother cat had company. Following closely on her heels but staying well hidden, was a tiny kitten. While our patience had been rewarded just by the mere sighting, I was praying for it to come out in the open. Dodging over hanging branches, we managed to keep the mother cat in sight and kept praying for a clear shot. It would be utterly heart breaking to have seen a Fishing Cat at such close quarters and not been able to photograph it. The mother cat however did not seem to be in the mood to pose. She turned and disappeared inshore. The kitten however was a curious soul. She sat peering from the bushes, wondering what this treachery of two legged creatures were. A good half a minute passed while she gazed at us, then quietly she rose and went back on her mother’s trail.

We just couldn’t believe our luck. Fishing cats have been listed as an endangered species by the IUCN. Rapid loss of its habitat and retaliatory killing by the natives has brought it on the brink of extinction. So to have seen one in the wild, was indeed remarkable.

Though the sighting would be highlight of our trip there was still a bit more to explore. An half an hour’s ride away we reached a tiny stretch of island where the river empties into the sea. The island must be some 2 kms long and looked completely devoid of any life. But as we walked across we saw small red creatures run down holes in the sand, a colony of Red Ghost Crabs.

Ramesh informed us that this was actually an Olive Ridley Turtle nesting site. The hatching season however was still three months away. Looking at the tiny strip of sand I could well imagine how seemingly crowded, yet utterly beautiful it would be to see those hatchlings scramble for space. It would be sight right out of a natural history production, to watch those hatchlings take their first breath and then crawl into to the sea.

It was a truly incredible day, something that will stay etched in our memory for long. May the Gods of the wild be as generous with sightings on our future sojourns as well.