Macau: A confluence of East & West 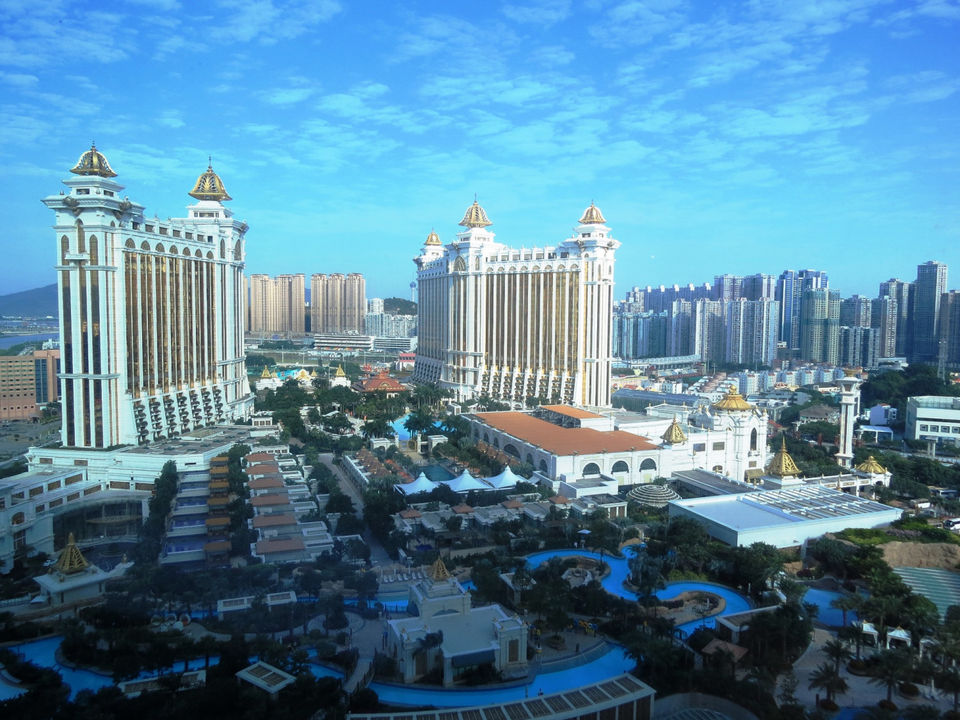 With a Portuguese past until 1999 and the Pearl River Delta binding it to mainland China, where does the Special Administrative Region of Macau stand today? 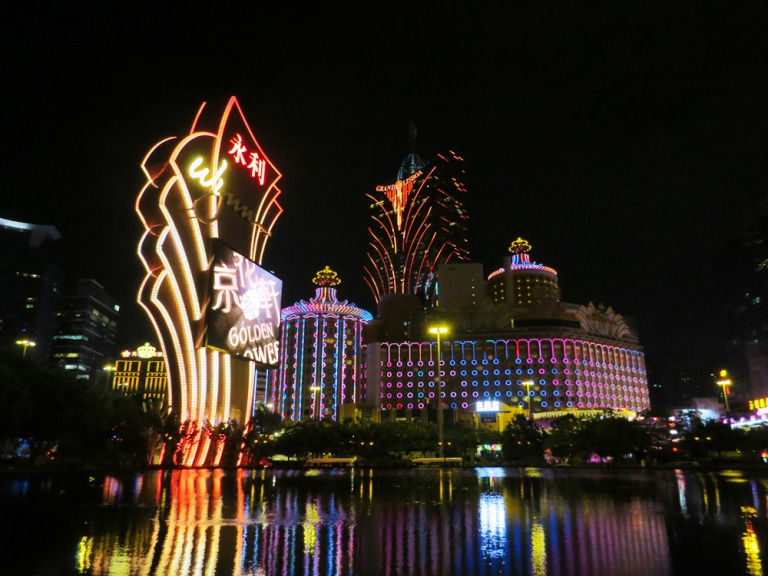 My first meal in Macau, a Special Administrative Region (SAR) of China, was a nine-course Chinese lunch, complete with dimsums in bamboo baskets, pickled fungus and copious amounts of Jasmine green tea. Yet, all the guidebooks ever talk about is Macau's enduring Portuguese heritage. And as the days passed, I realised that was not far from the truth either.

The return of Macau to its 'Chinese mother' on December 20, 1999 was celebrated with much fanfare and some of the fervour can be experienced till date at the Handover Gifts Museum of Macau, built at the same site where the actual transfer took place.

The museum hosts various treasures gifted by the different Chinese municipalities to welcome Macau back to the fold, including masterfully crafted dragons, tall Chinese vases and a multi-headed golden elephant. 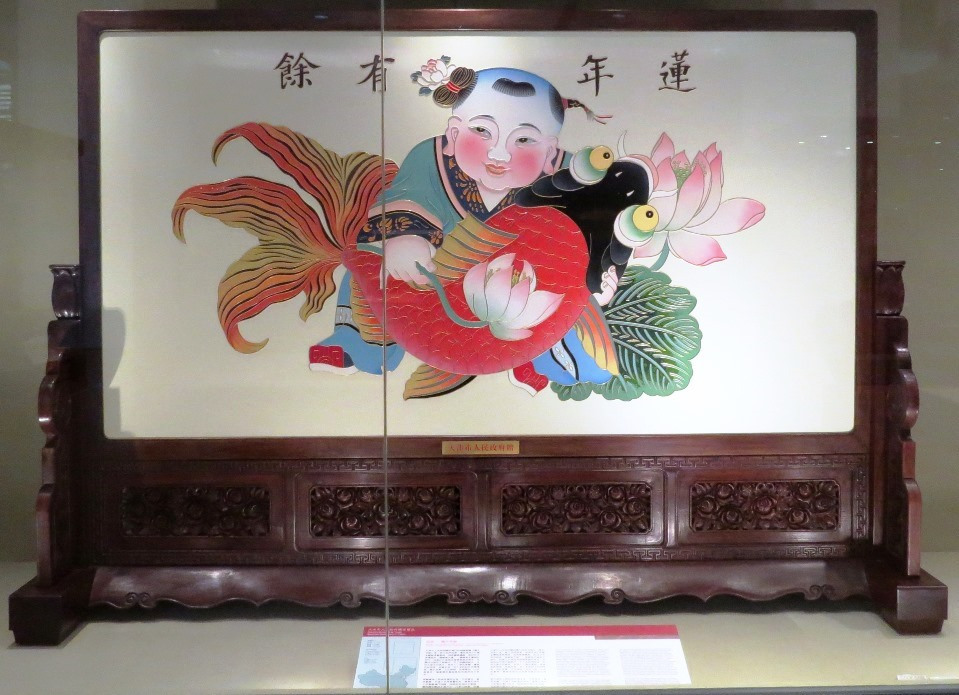 The sculptures resonate with the pride of the Chinese people when the People's Liberation Army first entered Macau after the handover.

A Chinese SAR it may be, but Macau's belly bursts with authentic Portuguese flavours and souvenir shops proclaiming their love for The Rooster of Barcelos, Portugal's best known emblem. 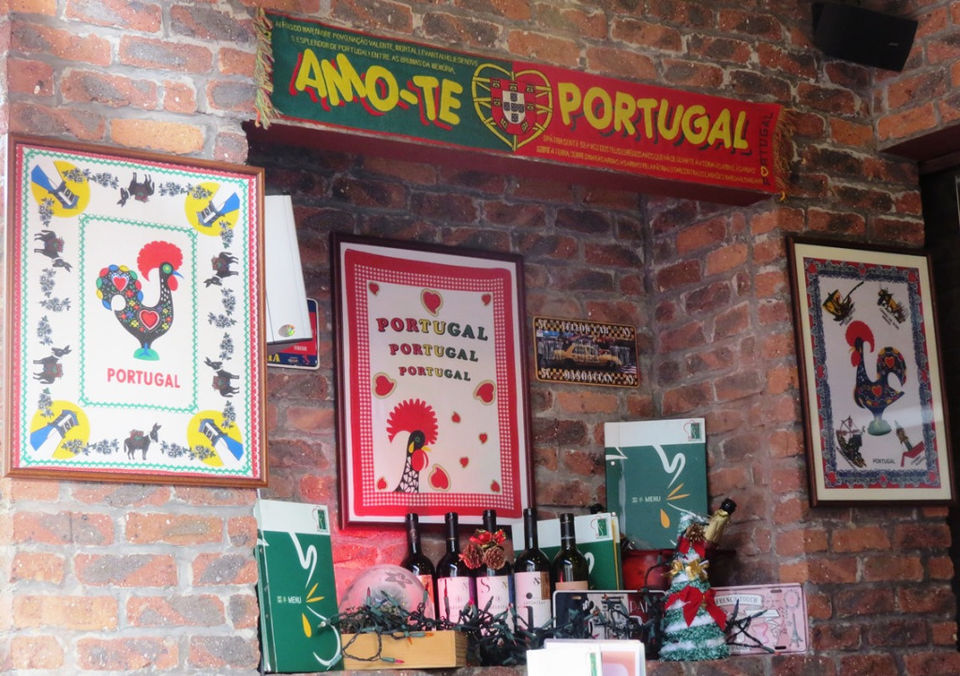 Legend goes that the Barcelos cockerel saved the life of a traveller who was mistakenly accused of theft. The details of the story are rather dramatic, involving a roast cockerel which miraculously jumps up from the judge's plate and crows to prove the prisoner's innocence. True or not, it was the cockerel that I found emblazoned on countless ceramic mugs and keychains.

Only in a little shop in Taipa did I find Chinese Buddhas occupying pride of place on the mantelpiece.

Of course, a large part of the Portuguese artefacts in Macau can be attributed to the fact that it draws in tourists. Watching glowing brides and grooms-to-be posing outside excellently preserved Portuguese villas and walking along the haloed corridors of St Lawrence's Church can make for an interesting holiday indeed. Even citizens of mainland China enjoy this whiff of a western culture in their own backyard.

It is interesting to note that although the five star hotels seem to be partial to oriental cuisine, many of the best restaurants in Macau are vibrantly Portuguese.

The all famous Portuguese egg tart 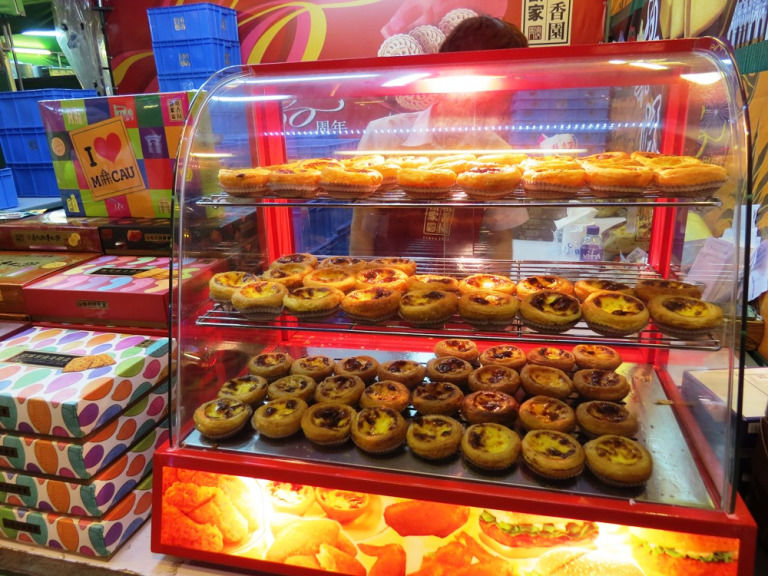 At Antonio, a beautiful restaurant in the heart of Taipa Village, we were regaled by a sonorous Portuguese singer and guitarist over dinner. Marcellino was a definite crowd pleaser as he belted out songs in three different languages - Portuguese, Cantonese and English. But it was his ditties from the streets of Lisbon that brought out the flavour of the African chicken and orange caramel crepes best. Warm egg tarts, a filling Portuguese dessert, are found and devoured in every pastry shop in Macau, as are almond cookies, a local delicacy. Portuguese wines, especially the strong and sweet dessert wines, are a well-loved component of Macanese meals.

The streets are Portuguese!

Our guide pointed out that in the road signs, Cantonese has taken over subtly, with the Portuguese transliteration playing second fiddle.

In some signages, Chinese has taken over completely 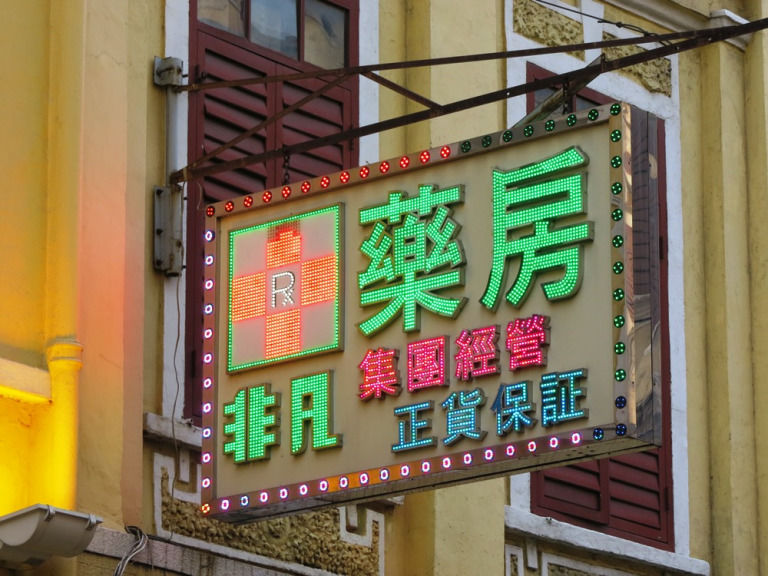 But the fact remains that the names themselves are still markedly Portuguese - Rua dos Clerigos and Estrada de Hac-sa painted in blue on cheery white signage boards.

In fact, they bear a startling resemblance to road signs in Portugal, where many Macanese residents own property that serve as second homes and a precious link to their past.

A few streets go by two names - one Portuguese and the other, Chinese. It is customary to find western and Chinese pharmacies on the same street. Sometimes, stores sell Korean herbs as well.

Nostalgia or maybe not

The older denizens of this colourful peninsula might feel wistful about the pre-Chinese era but the present generation looks perfectly comfortable with the state of affairs. They are the suave Macanese of dual descent, some of whom even speak English with aplomb, such as the gregarious guard at Lou Kau Mansion. Finding this mansion not too many had heard about was tricky, given that most people in Macau speak only the local languages. And so, I relied on gestures to communicate with friendly shopkeepers and passers-by. Eventually, we found this preserved home of a wealthy Chinese merchant almost by chance. 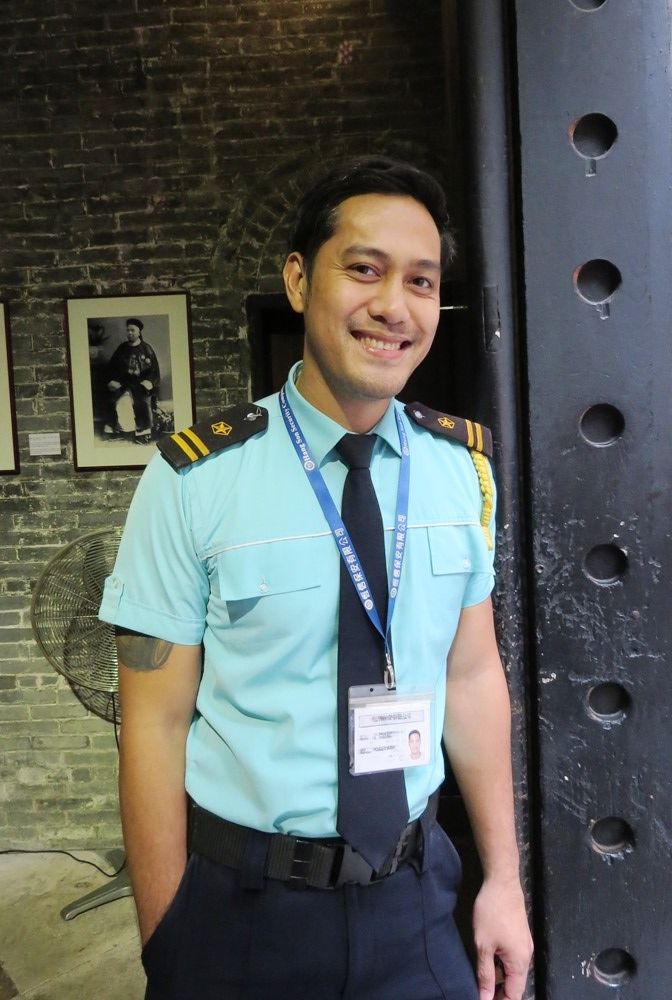 There, the guard told us that Indian food smelt really funny, although he enjoyed spicy curries.

China may still have a reputation for being cosseted from the rest of the world but the young Macanese are reasonably worldly-wise. 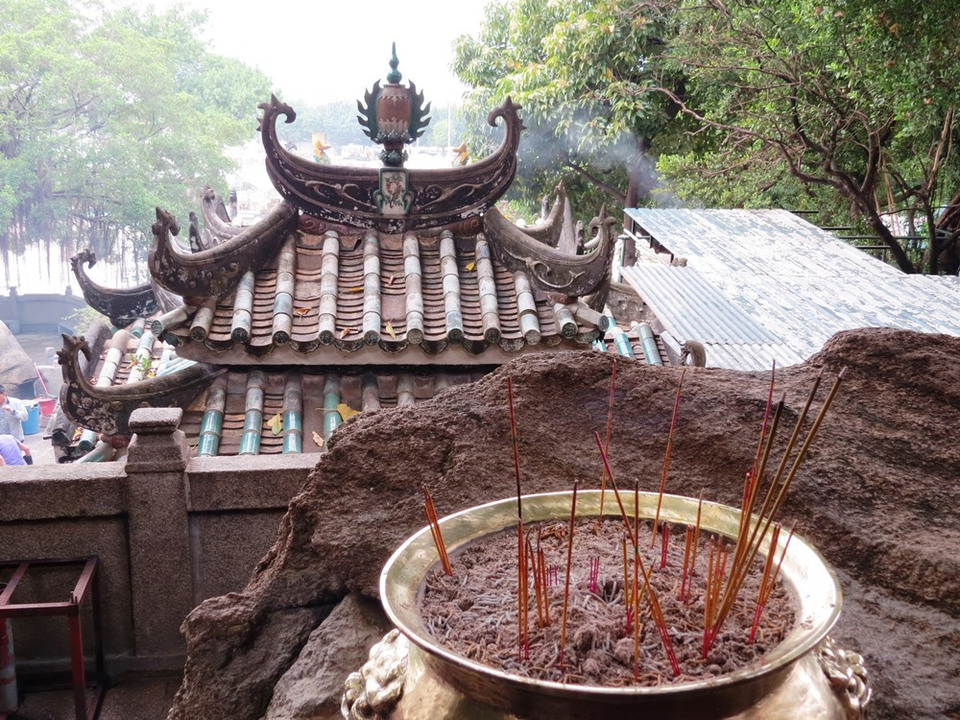 At A-Ma Temple, a famous Taoist temple dedicated to Matsu, the goddess of seafarers and fishermen, I saw Chinese men and women performing Kau Cim, an ancient fortune-telling practice.

As a part of the procedure, worshippers ask a question to the deity and shake a cylinder of red-tipped Kau Cim sticks.

The stick that drops to the floor provides an answer to the question just asked. At St Francis Xavier Church in the quiet Coloane Island, we saw a painting of Mother Mary and Baby Jesus with distinctly oriental features! 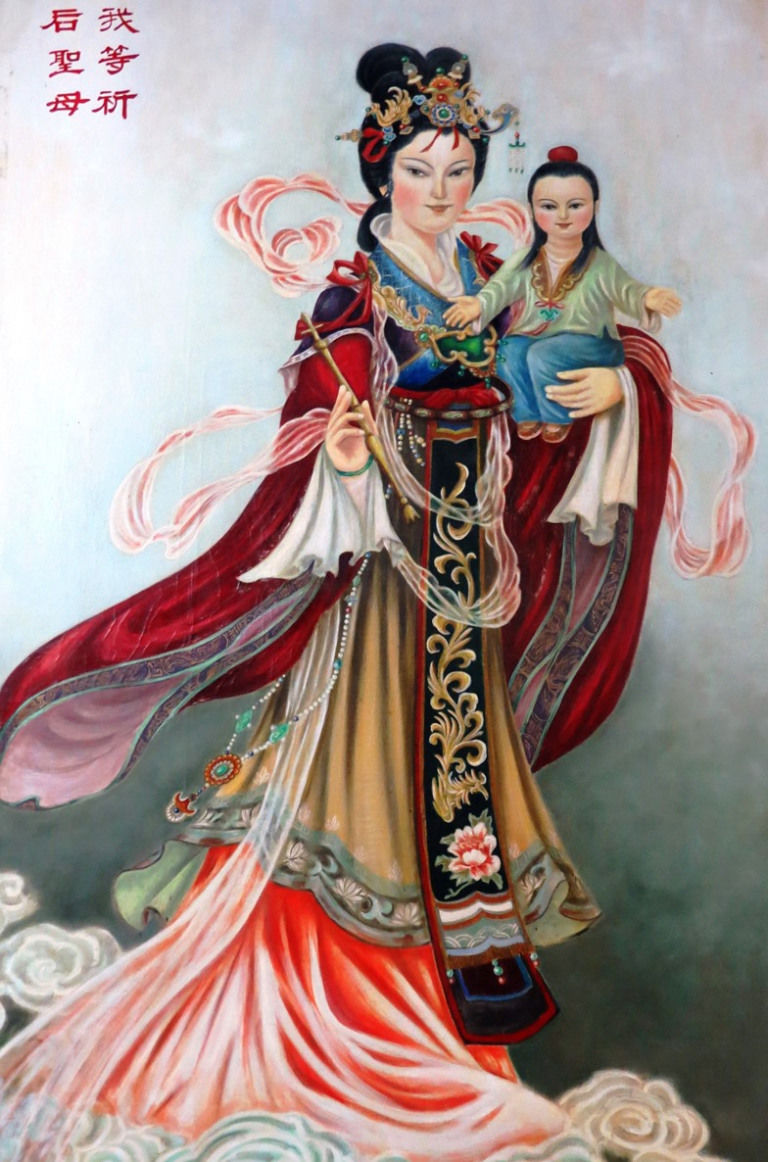 It was only during The House of Dancing Water Show that I got an inkling of the passions that run deep beneath Macau's happy-go-lucky exterior. The two hour long live performance consisting of larger-than-life theatrics and acrobatic feats tells the haunting tale of a westerner who falls in love with a Chinese woman and the numerous struggles they have to undergo to be together.

The villains in the saga are pointedly foreign with only the beautiful leading lady and a hapless seafarer of Chinese descent. 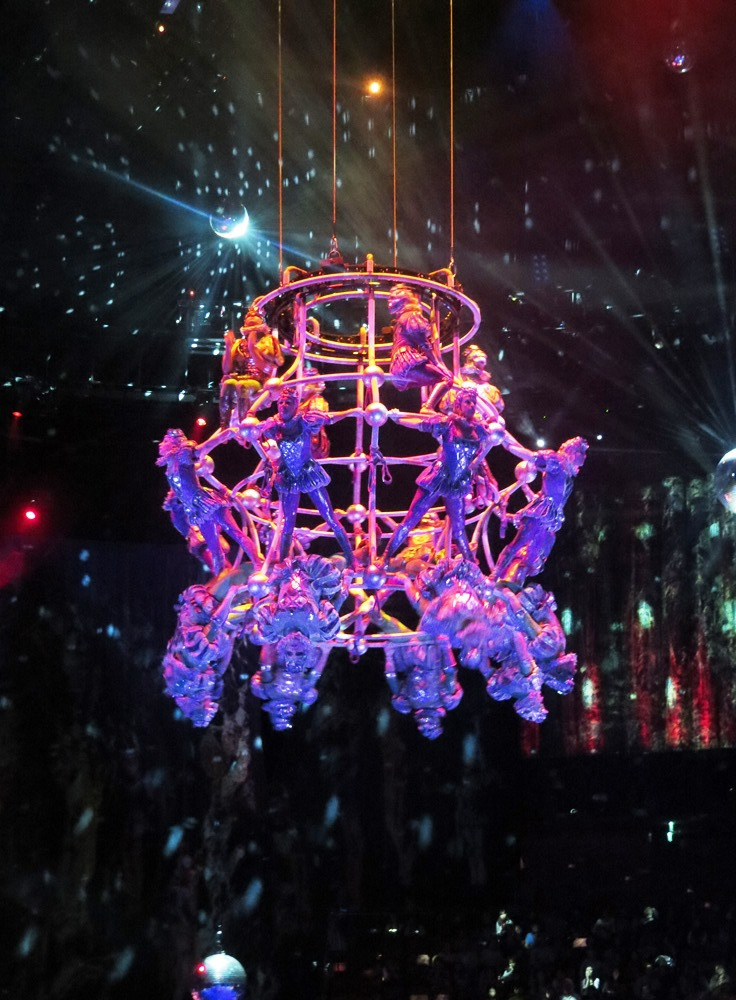 Although the performance is meant to convey a glowing message of 'East meets West', it is a telling reminder of how heavily the Macanese rely on their varied past to create narratives even today.

The Chinese preoccupation with dragons is evident in carvings on pillars and larger than life shows at Macau's malls. But I do believe that Macau is slowly carving its own independent identity with allegiance to neither country but a fondness for its Portuguese past and an appropriate deference towards its Chinese present. 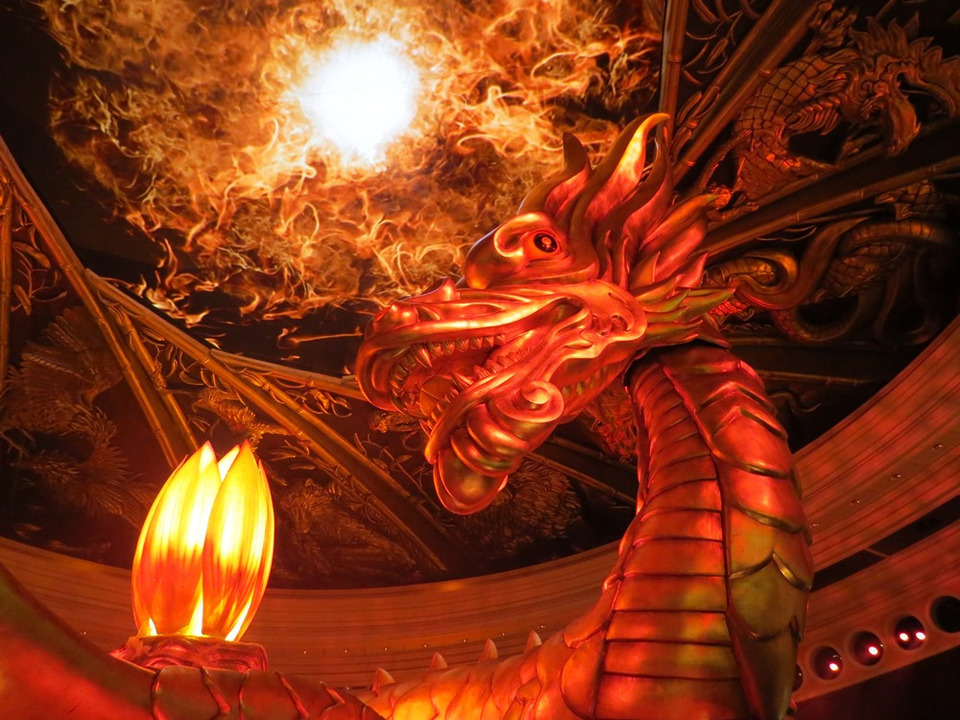 This blog was originally posted on Trail-stained Fingers.