Canada Travel GuideCanada TripsAmritsar - Like You Have Never Seen It Before! 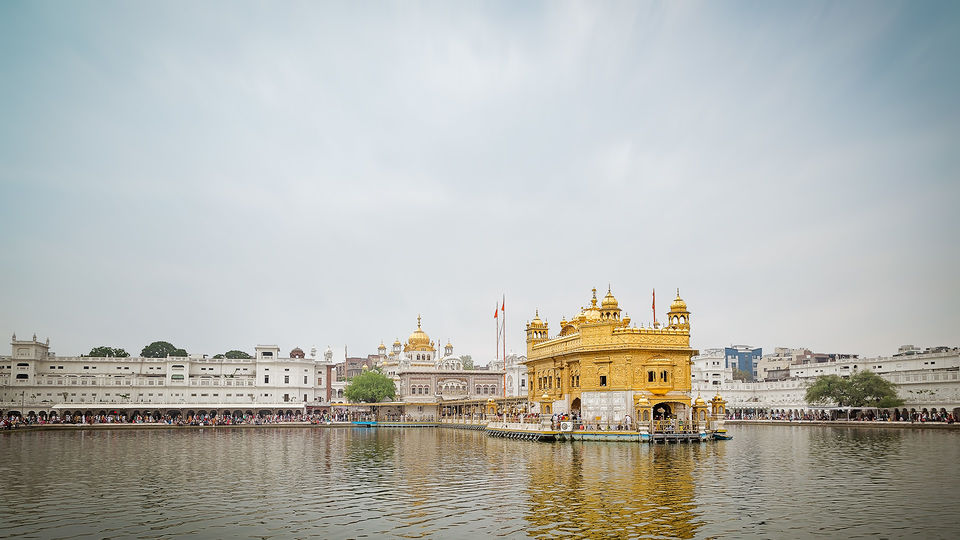 Amritsar (literally, the tank of nectar of immortality) was founded in 1577 by the fourth Sikh guru, Guru Ram Das. It is a city of juxtapositions that has been able to keep ties with the past & work towards a new future. And so it was on my recent trip to this holy city that I was abundantly flabbergasted about all the new developments that had taken place, thereby changing the whole outlook of the city in a comprehensive manner and yet retaining the ethos with which it was founded all those centuries ago!

Now, Amritsar is by no means a quiet city to be in! There is always something going on somewhere & one rarely sees an empty road, especially near the heritage area. Keeping this in mind, I had intentionally went about clicking my photographs, just as the sun was coming up. The result was some exceptional blue hour shots with just a minimum intervention of people in them.

My first stop was the Saragarhi Sarai (a nine-storeyed luxurious inn for pilgrims), built right on the Heritage Street & is dedicated to the martyrs of Battle of Saragarhi where, in 1897, 21 Sikhs refused to give up & stood ground against 10,000 Afghans. The tall building dominates the view & quite beautifully so. To those who haven't been to Amritsar before or they haven't been there in a couple of years, the whole area around the Golden Temple has been re-developed after years of non-stop construction work. The result is a sight to behold: pedestrian-friendly & car-free avenues, lined up with beautiful statues, leads you from Partition museum to Jallianwala Bagh while crossing Fawwara Chowk, eventually ending up at the entrance of the Golden Temple. Utmost care is taken to keep the streets clean notwithstanding the huge crowds that come there round the clock. And it is at this Heritage Street that you will come across the Saragarhi Sarai in all its glory. Another interesting fact is that a stay at this sarai is as cheap as Rs. 1,100 (around $16) per night.

Walking ahead from the sarai, I came across this magnificent marble statue of Maharaja Ranjit Singh, built right at the square. This square is also known as Fawwara (Fountain) Chowk (square). A bit of history: Maharaja Ranjit Singh (1780-1839) was the greatest Sikh ruler of all time & ruled the northwest Indian subcontinent in the early half of the 19th century. He was the last definitive force that stood in the way of total British dominance in India.

Walking ahead from the Fawwara Chowk, my next stop was Jallianwala Bagh. Right in front of the entry gates, there is another statue which is made in remembrance of those who died at the Jallianwala Bagh massacre in 1919. The statue also contains several of the names of those people who perished that day.

The Nishan Sahib is a Sikh triangular flag made of cotton or silk cloth, with a tassel at its end. The word, "Nishan" means symbol, and the flag is hoisted on a tall flagpole, outside most Gurudwaras.

A prime example of marble inlay work at the Golden Temple, Amritsar, Punjab.

Maharaja Ranjit Singh is primarily credited to have been the guiding force behind beautifying the complex under his rule. However, it should also be mentioned that being the holiest site, almost every sardar of any pretension contributed to its architectural and decorative additions from time to time.

While I was walking the perimeter of Harmandir Sahib, I noticed this structure at one end which was overlooked by the crowd (despite its magnanimous size). It was after reading up the information slab in front of it that I came to know about its name: Ramgarhia Bunga. This three-storeyed structure was built in 1755 by the Sikh warrior, Jassa Singh Ramgarhia, to fortify the area around the holy complex from outside invasion. The two minarets on either side of the mansion were used as watch towers and at one time there were 22 of them spread across the perimeter of the Golden Temple however only these two survive today.

I went looking for an entrance to see the structure from inside however, finding the entry was no child's play as it is not fully open for public. Be that as it may, I was finally able to ask around & got into the building which presented a spectacular site of the surroundings.

The Golden Temple as seldom seen from the vantage point of Ramgarhia Bunga (mansion). During the reign of the Mughal Emperors, the Golden Temple was damaged many times, but each time it was rebuilt by the Sikhs. Sardars of the 12 Misls (sovereign states of Sikh Confederacy) decided that some of the Khalsa leaders must be housed inside it for its protection against their enemies. Sardar Jassa Singh Ramgarhia had conquered territory as far afield as Delhi, where he removed the slab from the throne on which the Mughal coronation ceremonies were held at Red Fort. He brought the slab to Amritsar in chains, as a prized trophy, and placed it in the Ramgarhia Bunga. The marble slab can be seen in this frame.

An inside view of Ramgarhia Bunga (mansion) at the Golden Temple, Amritsar. The inner walls are now laid bare but once they were adorned with red sandstone & lime plaster.

One of the two surviving watchtowers at Ramgarhia Bunga inside Golden Temple, Amritsar.

And with these shots I came out of the Golden Temple & headed to a building which, in my humble view, is probably one of the most important places to visit in Amritsar.

The Partition Museum (first of its kind anywhere over the world) is a central repository of stories, artifacts & documents related to the post-partition riots that followed the division of British India in 1947 into two independent countries: India & Pakistan.

The museum has such an enormous display of contents related to that era that even the most hardcore people would be moved by the time they come out of the exit gates.

Unfortunately, taking photographs inside the museum is not allowed, so I had to be content with shooting only the exterior.

The last stop on my trip was at Durgiana Temple & it has an interesting connection with my family. Built in 1921, this temple was the brainchild of our family ancestor, Harsai Mal Kapoor & to honor his memory, his statue is placed at the entry gates. It was constructed on the pattern of the Golden Temple & Pandit Madan Mohan Malviya had inaugurated it. I had grown up hearing stories about how my father was regularly brought at this temple by my grandmother, where they would sit, what they would eat, etc. etc. And being able to retrace their footsteps, after all these years is a humbling experience altogether.

With it, my short but enthralling trip to Amritsar came to a close. That's it for now! Hope you liked scrolling through the photographs.

Tell me which one you liked the most!?