My Son Sanctuary - Relics of Hinduism in Vietnam - Life Outside Cubicle

My Son Sanctuary is one of the must visit places in Vietnam for the Travelers who are interested in History, Mythology, and drawing parallels between different religions. The sanctuary is a cluster of partially ruined temple relics depicting the influence of Hinduism on Cham people and the craftsmanship of Champa Kingdom.

As per Hindu scriptures, Mount Meru is considered as the center of Universe. It is the abode of 3 Supreme Gods – Brahma (The Creator), Vishnu (The Preserver), and Shiva (Destroyer of Evil and The Transformer). It is also the abode of Devas (Hindu Gods and Demi-Gods).

The sacred mountain is believed to have 7 Higher Lokas (Planes/Worlds) and each of these Lokas are guarded by Supreme Gods.

6th Plane of Existence – Bhuvarloka – The Realm of the Sun and the planets.

4th Plane of Existence – Maharloka – Abode of Great Sages and Rishis who have attained a greater feat through years of meditation.

3rd Plane of Existence – Janoloka – This is where the souls of unhindered access to material world live.

2nd Plane of Existence – Tapoloka – This world is inhabited by immortal knowledgeable beings.

1st Plane of Existence – Satyaloka – This is where Brahma – Supreme consciousness exists.

Mount Meru is guarded in the 4 natural directions (East, West, North and South) by 4 celestial guardians (Dikpalakas) who defend the world by keeping away the Asuras (Demon/Fallen Gods).

My Son Sanctuary - A Parallel of Mount Meru

Between the 4th and 13th centuries a unique culture which owed its spiritual origins to developed on the coast of contemporary Vietnam. This is illustrated by the series of impressive tower-temples located in the sanctuary of My Son. It was the religious and political capital of the Champa Kingdom for most of its existence.

Map of My Son Sanctuary 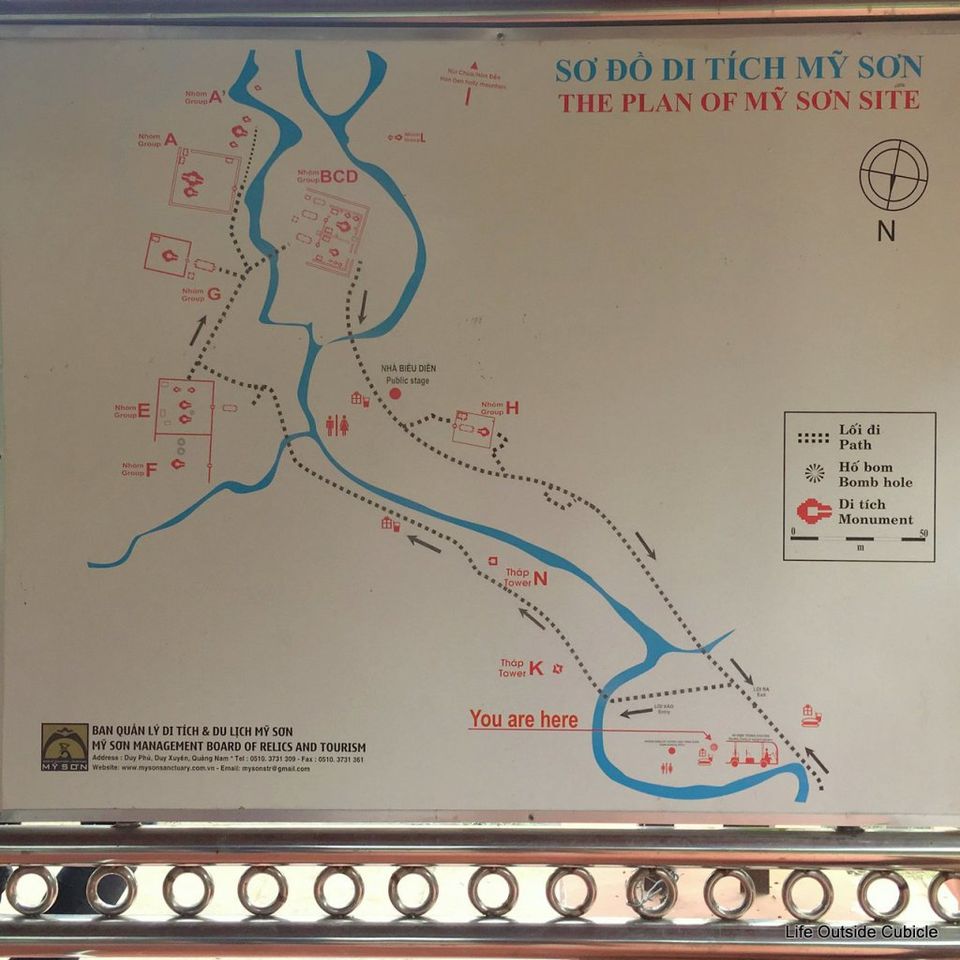 Group E and F are dated to the earliest time in My Son dating back to 4th Century. Most of the temples are in total ruins and an effort to restore the partially ruined temples in all temple groups of My Son is undertaken by the Archaeological Survey of India (ASI).

One of the ruined temple 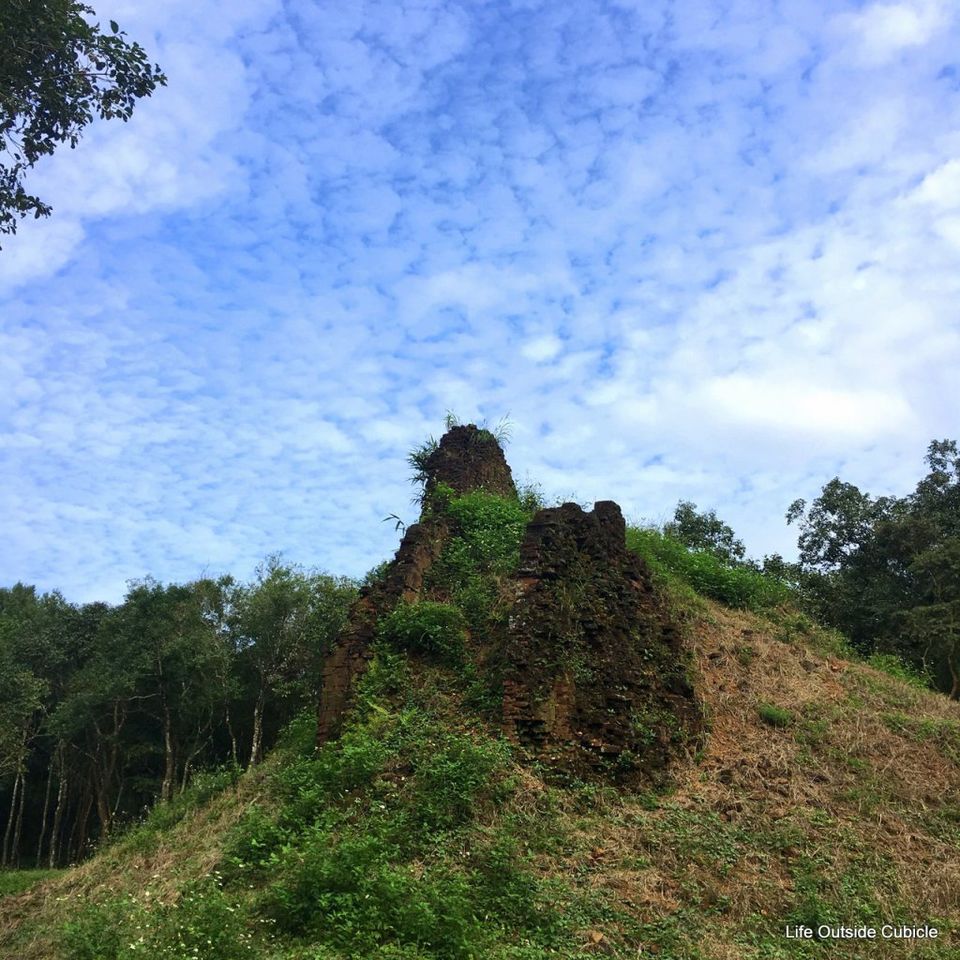 Group A is the only complex having the temple with two main doors opened to the East and the West. It is surrounded by small temples worshiping Directional Gods. It also has evidences of Lord Shiva being worshiped in the form of 'Lingam.' 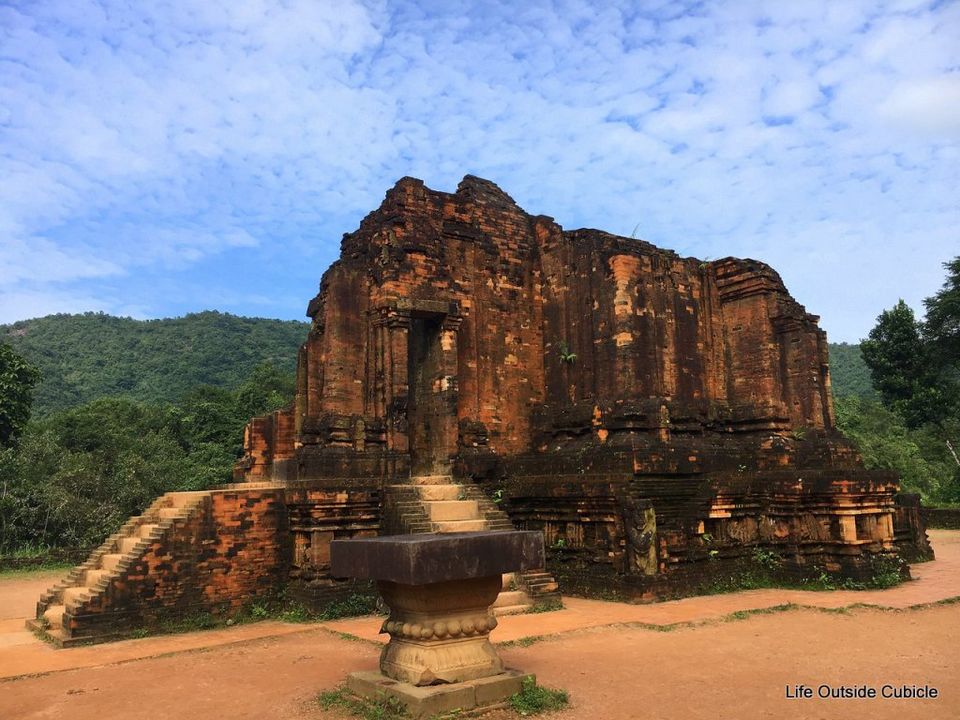 My Son Jungle Temples and Sanctuary 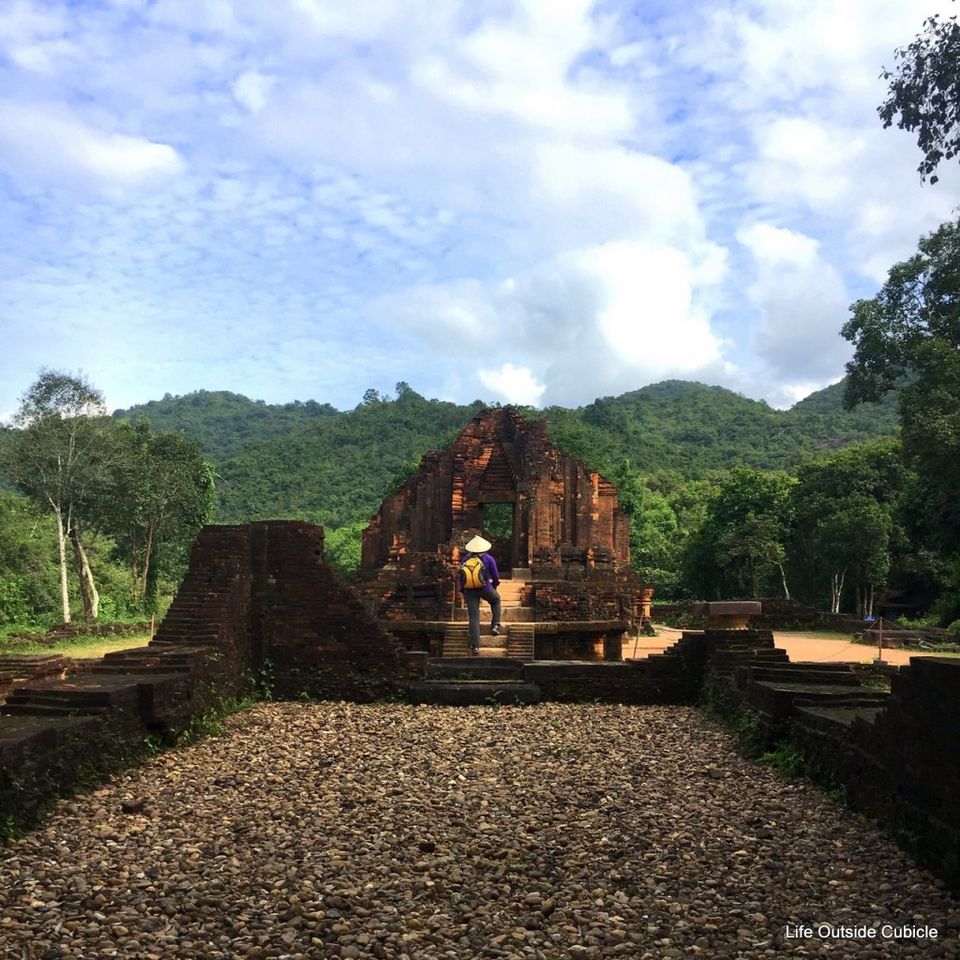 My Son Sanctuary – Half Restored and Half Original Temple Relic 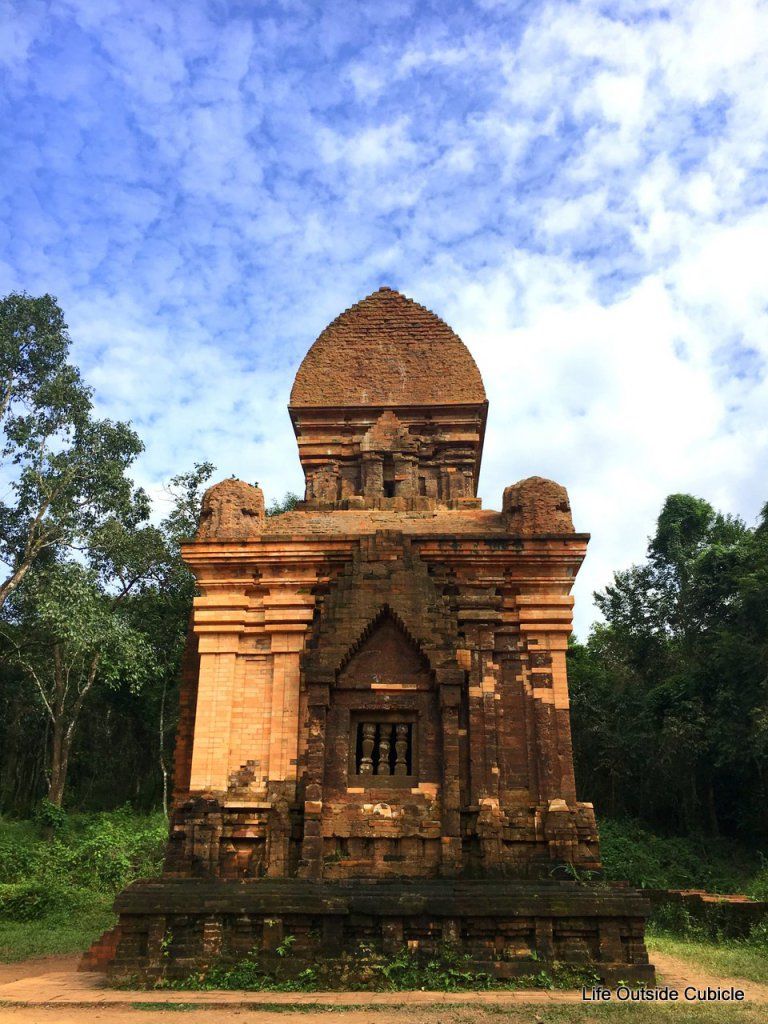 Group B-C-D temples are the center for worshiping in My Son. Main temples (B1, C1) reflect the two beliefs in the Lord Shiva: and Shiva Statue. The Complex of B-C-D temples reflects the view on the universe and worshiping atmosphere of Champa Kingdom. 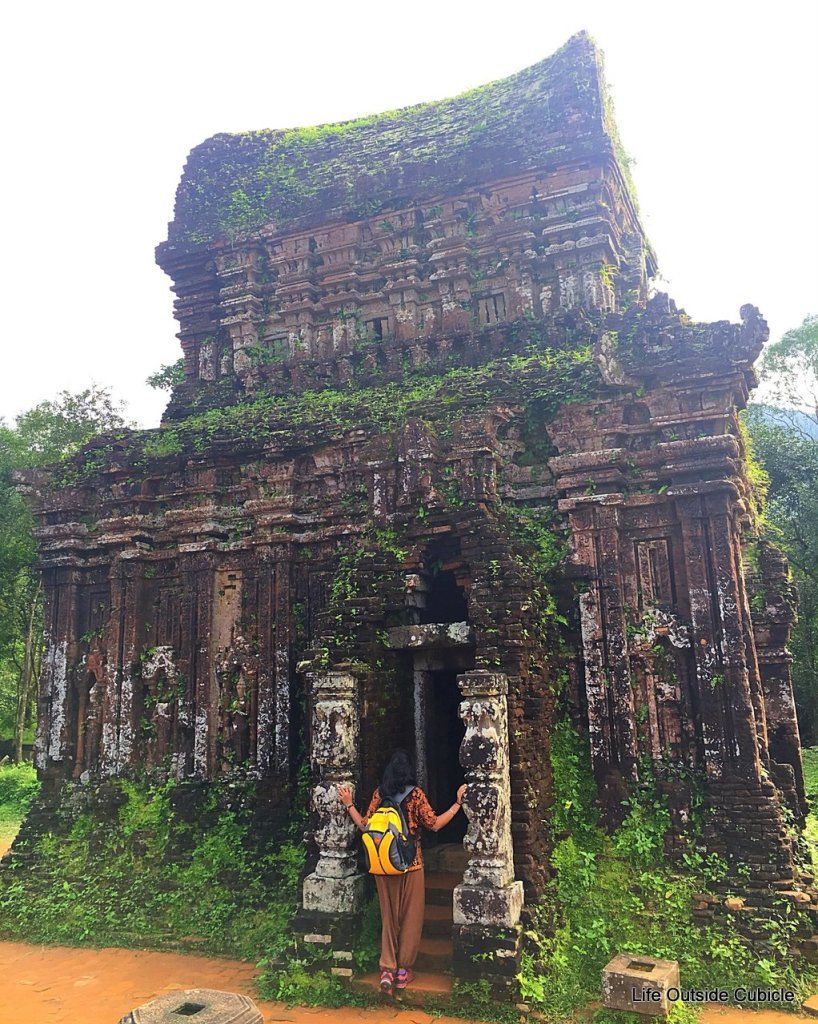 The Central Tower Temple, symbolizes the sacred Meru Mountain and is decorated with sandstone depicting scenes from Hindu Mythology. The square base of the temple is the depiction of human world. It is constructed with fired bricks, stones, and decorated with carvings. The main tower is the symbolization of Bhuvarloka, which rises above and is constructed using pillared structure. The center of the temple is dedicated to Lord Shiva. The roof of the temple represent the higher worlds and is framed with a fine decoration. A stone carving depicting the birth of Lord Brahma was found in the sanctuary. 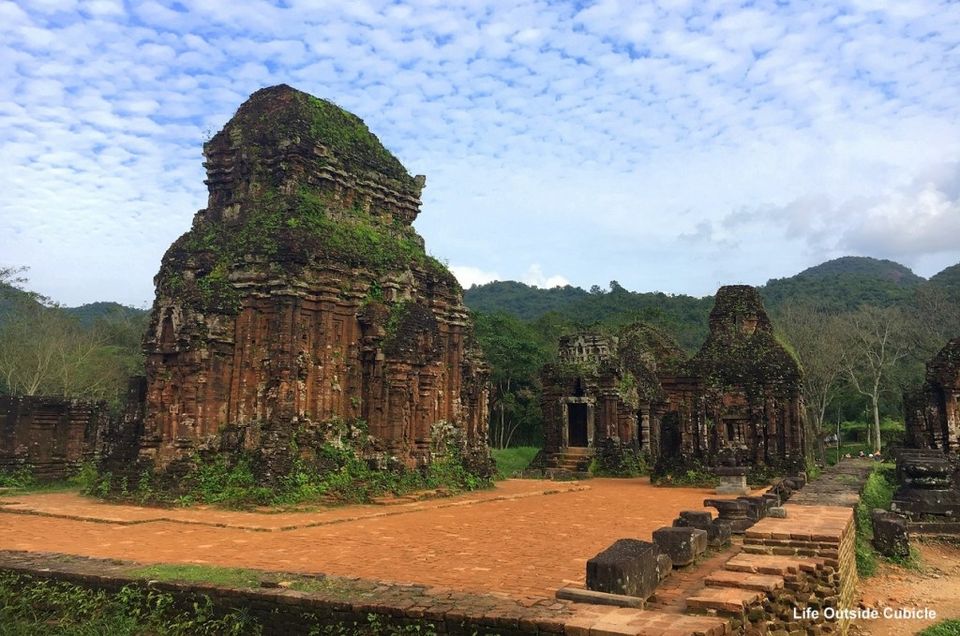 My Son Sanctuary is located at a distance of approximately 40 km from the city of Da Nang, Vietnam. Renting a motorbike bike is the best way to reach My Son as the road traverses through a scenic landscape and countryside of Vietnam.

Read more... A comprehensive guide for backpacking across Vietnam