When In Neoclassical Capital of Scotland: Edinburgh 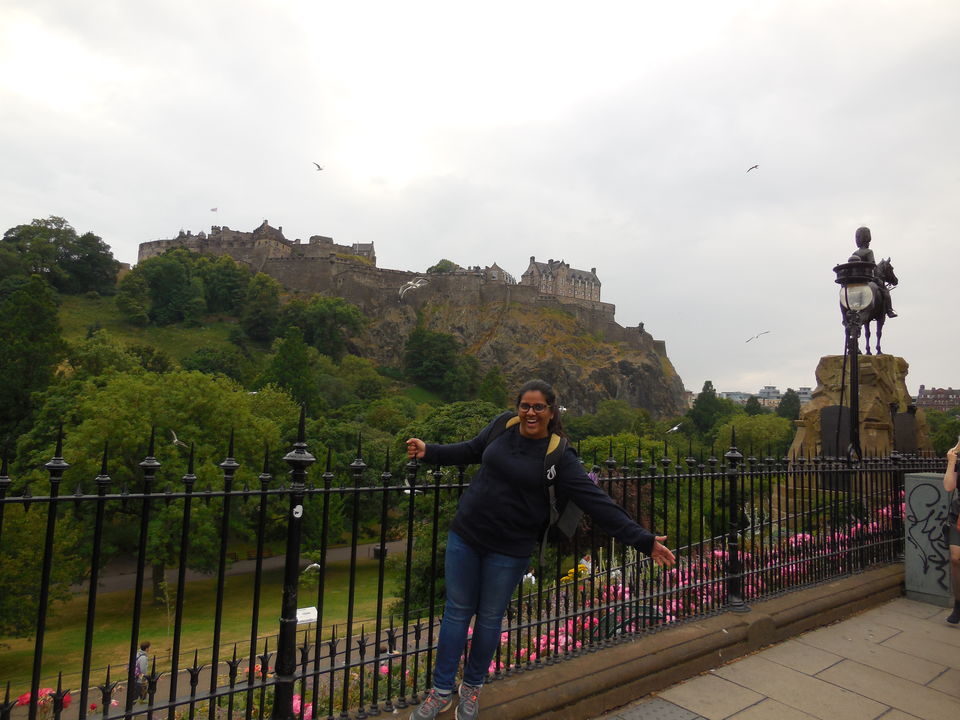 Our next destination was the city famous for its stone-like structures! The city itself is known as the Stone of Destiny!

As we reached Edinburgh, we first met our host in Haymarket (a wonderful attraction of Edinburgh) who treated our palates with amazing Indian food, the traditional dal chawal! Oh what lunch, a saying came to my mind after that, "A girl can leave India, but India will never leave a girl!" That was exactly the scenario. Anyways, after having the most wonderful traditional lunch we headed out to explore the city of Edinburgh!

We first went to the Edinburgh Castle, which is located on a small hill, much above the skyline of the entire city. We noticed on the way to our castle, that there were a lot of people and a lot of police on the streets. We found it unusual even for a city like Edinburgh. So after we parked our car while walking towards the castle we asked a kind policeman about the situation. On conversing with the policeman we found out that there was a concert, which is about to start in the premises of the castle. So we hurried up the stairs to see, if we could still go inside the castle. Just outside the castle gates, the government of Edinburgh has built a stadium like structure where people can attend concerts and other events! Which I thought was quite clever.

When we reached the entrance of the castle, we saw the mighty stage which was set-up for the concert. Also, we caught a glimpse of the band which was going to perform, rehearsing they were known as "Il Divo", never heard of them, but they sounded very good. Though they were setting up for the concert, the tourist were allowed to go inside the castle and visit. So we did that, there is only a certain distance you can go to without a ticket, after that you need a ticket. So we did not buy a ticket and went till where it was allowed without a ticket. We did not have much time and it was already evening time so we passed. If you have time and want to visit the Castle, you certainly can.

Attached to the Castle is the Royal Mile. The Royal Mile is One mile long streets, forming the main street of the Old Town. This street ends near the ocean. The street is filled with all the major points of attraction in the city of Edinburgh. So if you start walking down on this street you will find everything! Along the streets are numerous eating joints, souvenirs shops and much more! Weather, permitting you can spend all day on this street!

When you go further down the street you can find St. Giles Cathedral which is a wonder in itself! Along the street there are numerous street artists that are constantly entertaining with some or the other twists and turns, its a great fun to watch!

We were very very tired of walking from the Royal Street to the Princes Street, and now we were ready to head back, but the biggest obstacle in front of us was how to go back to the car! We did not want to walk all the way back because it was quite a distance, we could see the castle from Princes Street but did not know how to take a short cut! Stuck with the decision on what to do we decided to take the part less known. And boy, am i glad we took that path!

When on the path, we entered a beautiful garden, I have no idea, if google enlists it on the attractions of Edinburgh, but it was worth a look! We were tired so to give our legs a little bit of rest we stopped on a bench and attempted to sleep, but thanks to the rains, we did not have it in our destiny. So we started walking further, it was raining but not so much, and thank the heavens, we reached our car without getting drenched.

After reaching the car we headed out to the ocean and spent sometime there before heading back home.