A solo trip to Ladakh in Winters

Himalayan peaks lit up by the last rays of sunset 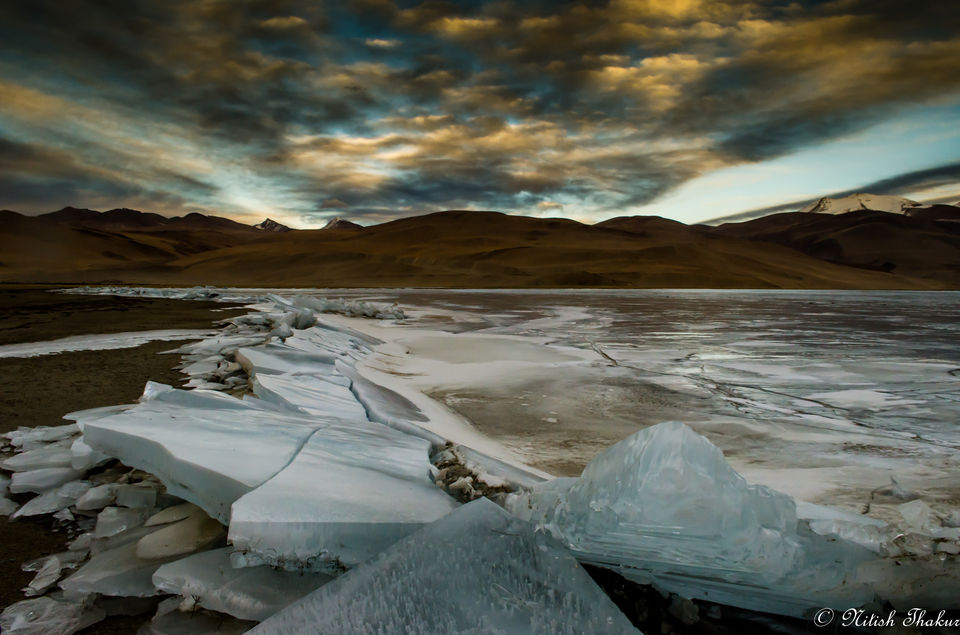 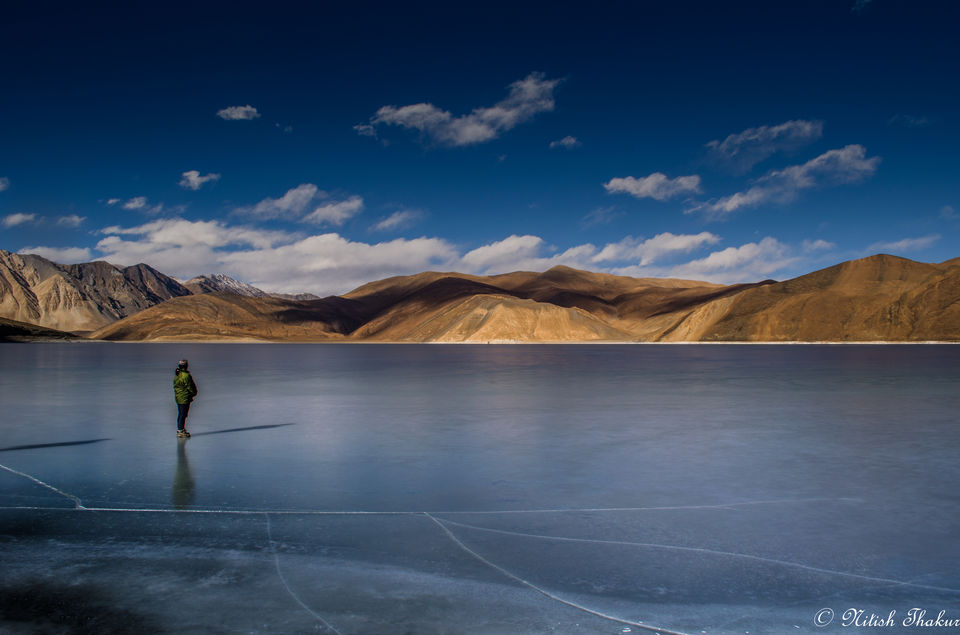 A long exposure pano of Leh town from Shanti Stupa 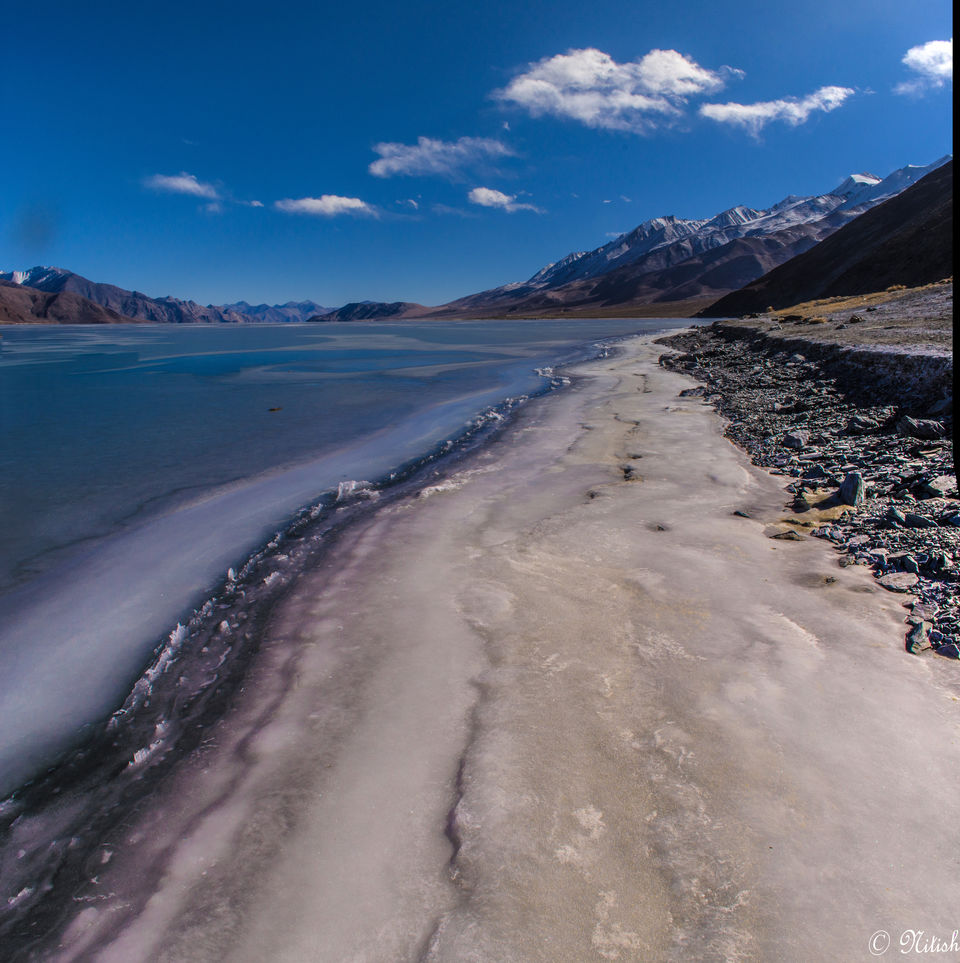 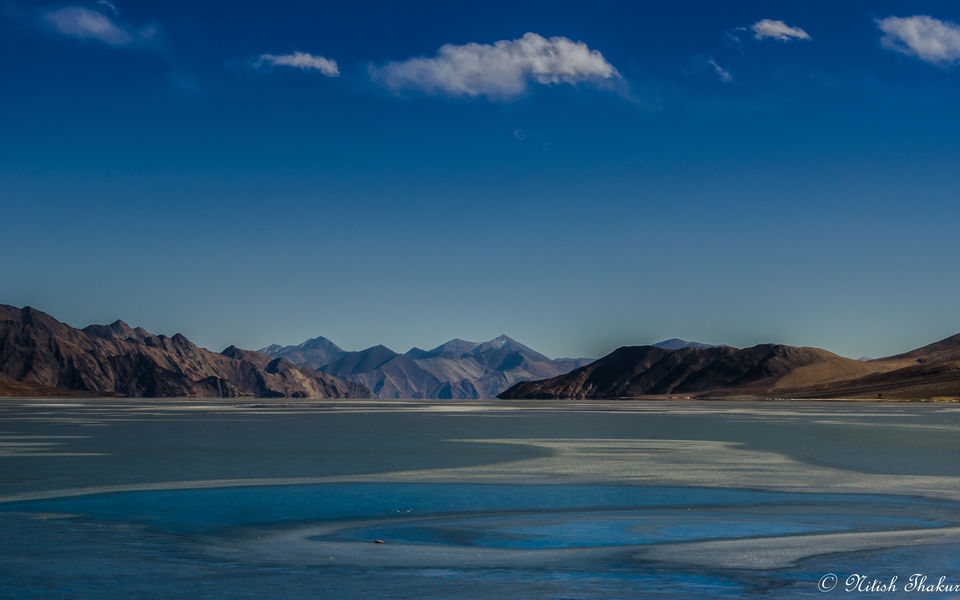 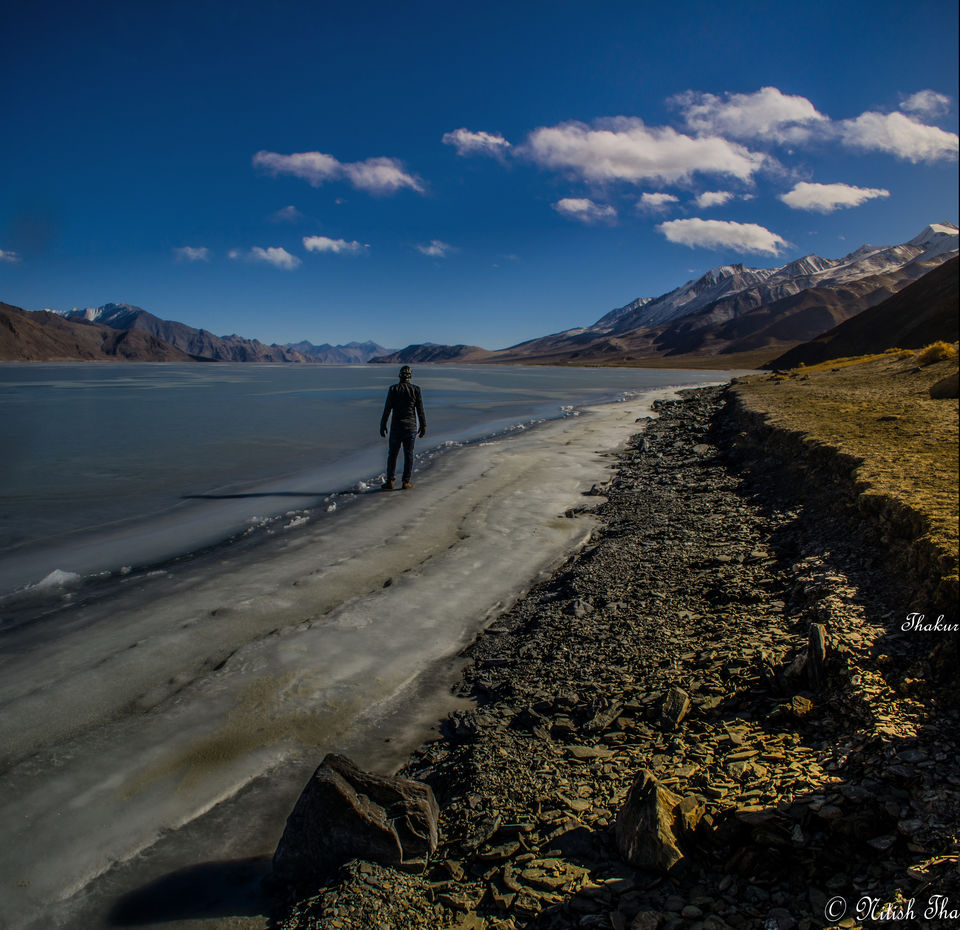 He just got his feet into the ice cold waters 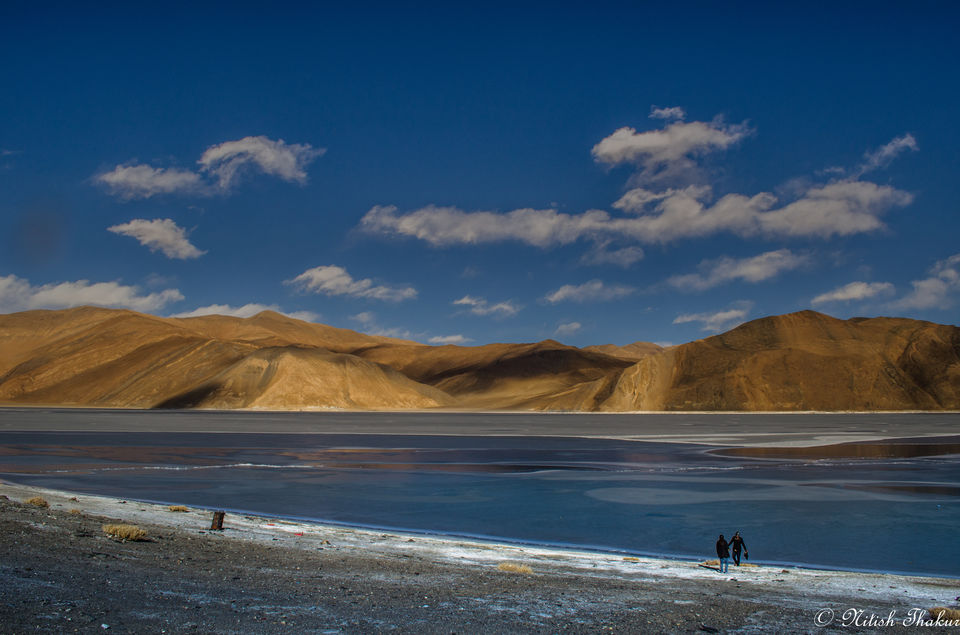 *Better than your regular city walk* 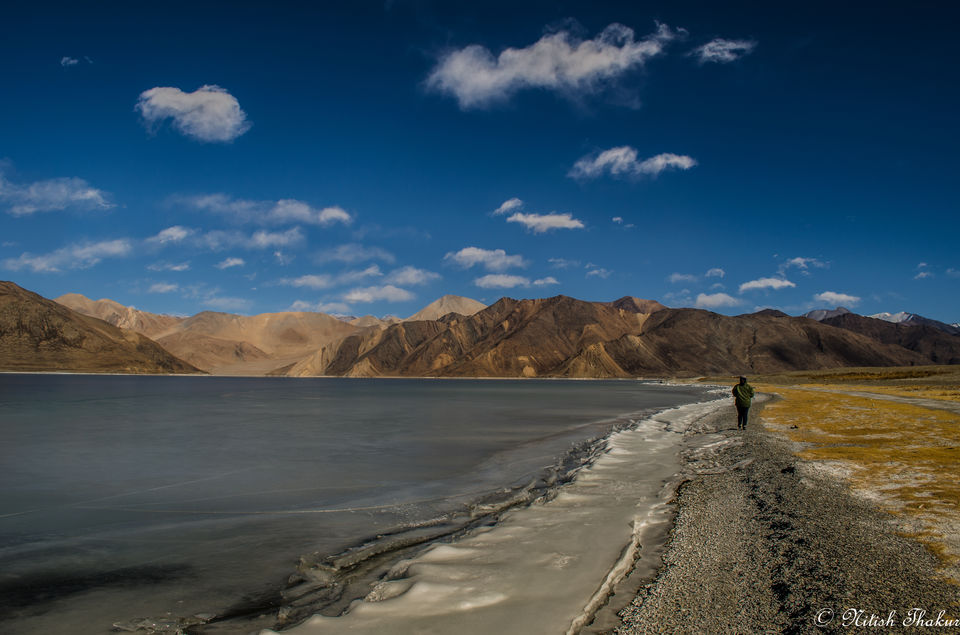 Lost in the mountains 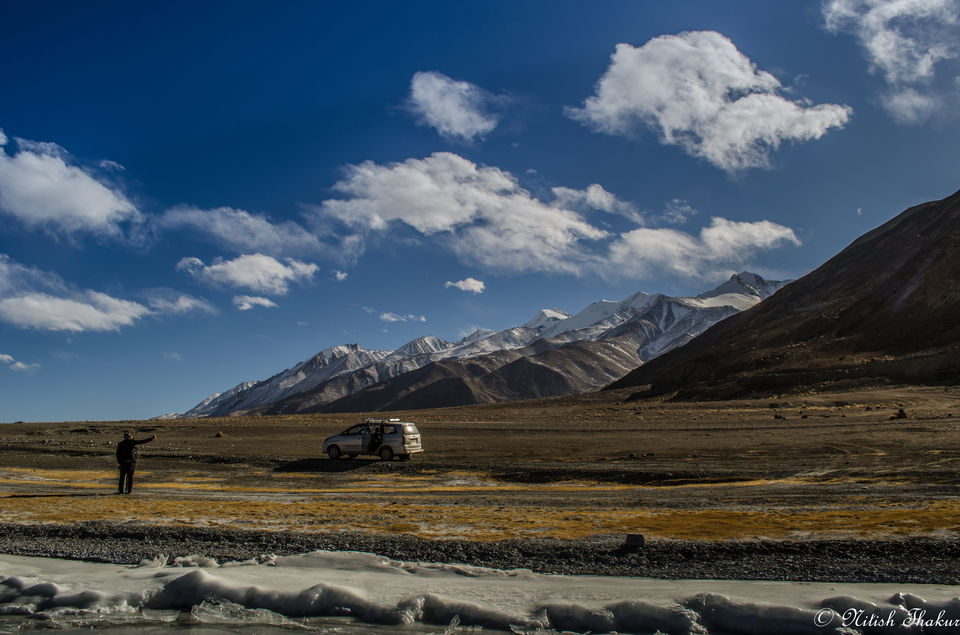 A view from the guest house 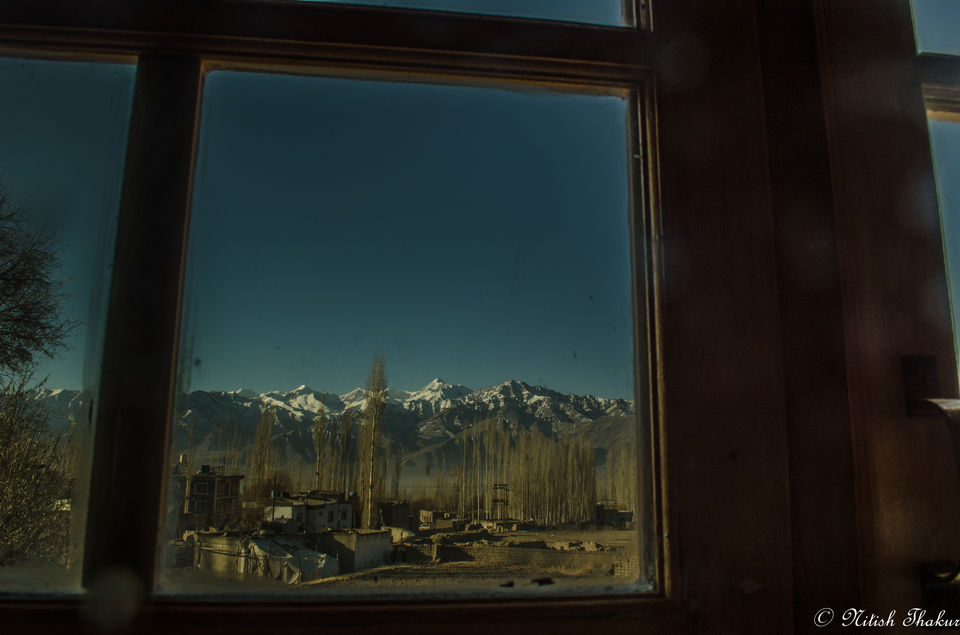 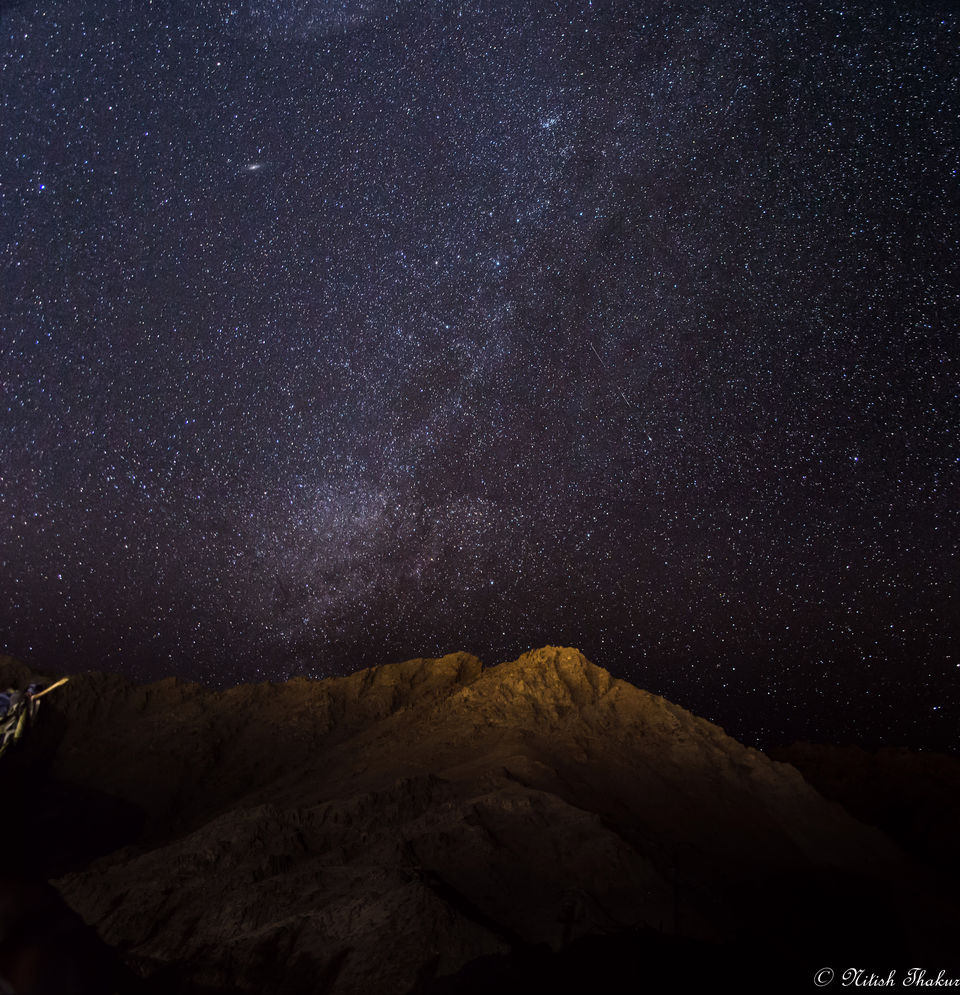 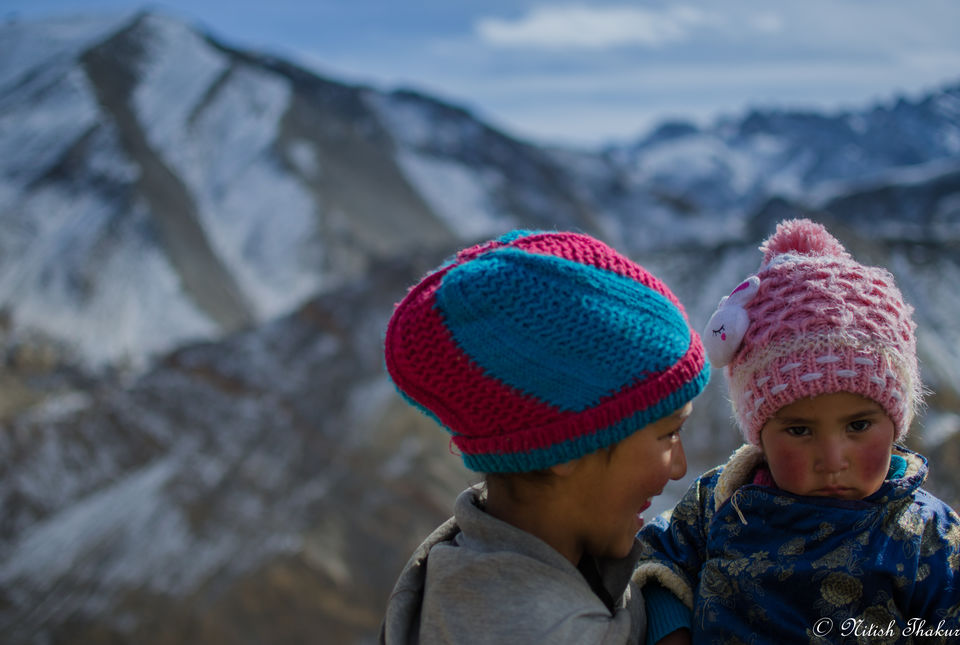 Met these 3 kids at the mountain top in Lamayuru 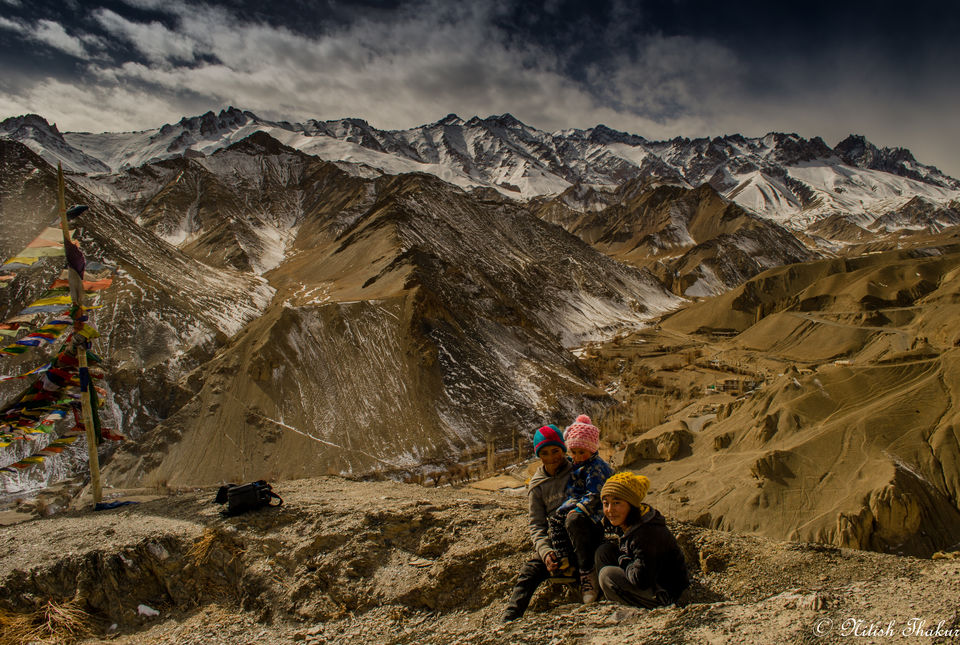 While coming back from Lamayuru to Leh 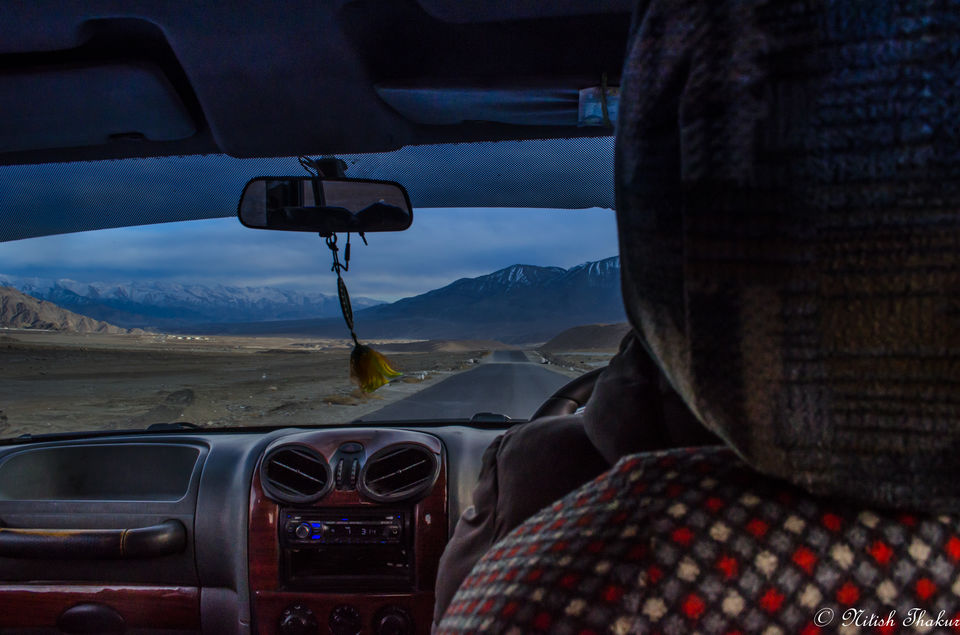 Dust storm brewing while on the way to Tso moriri 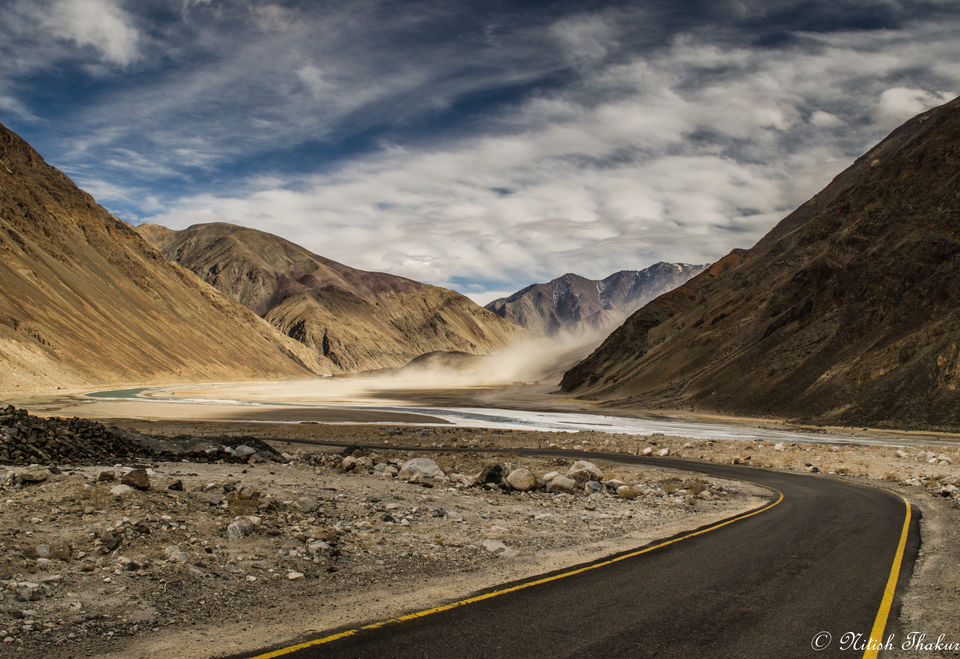 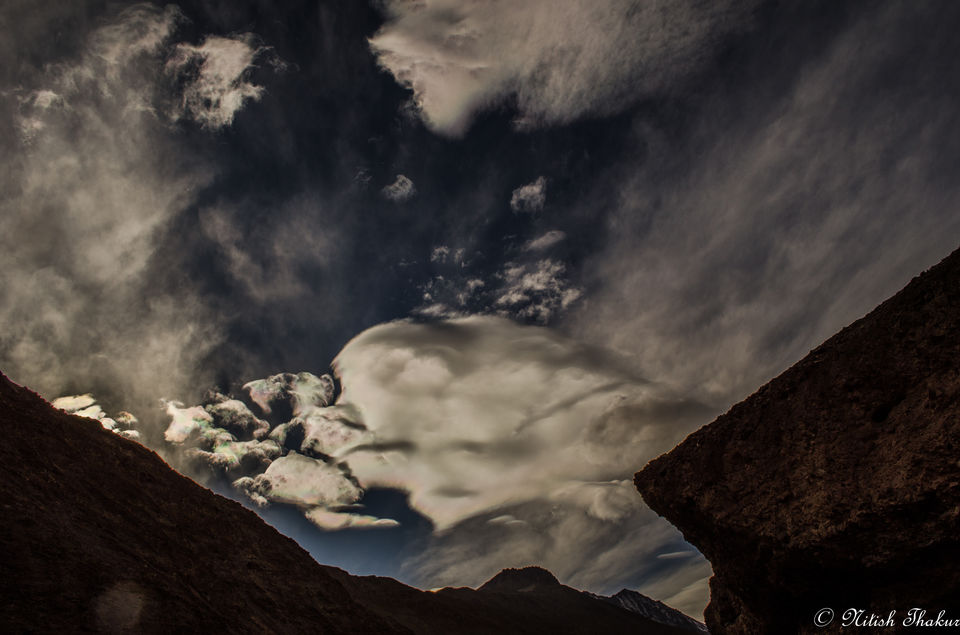 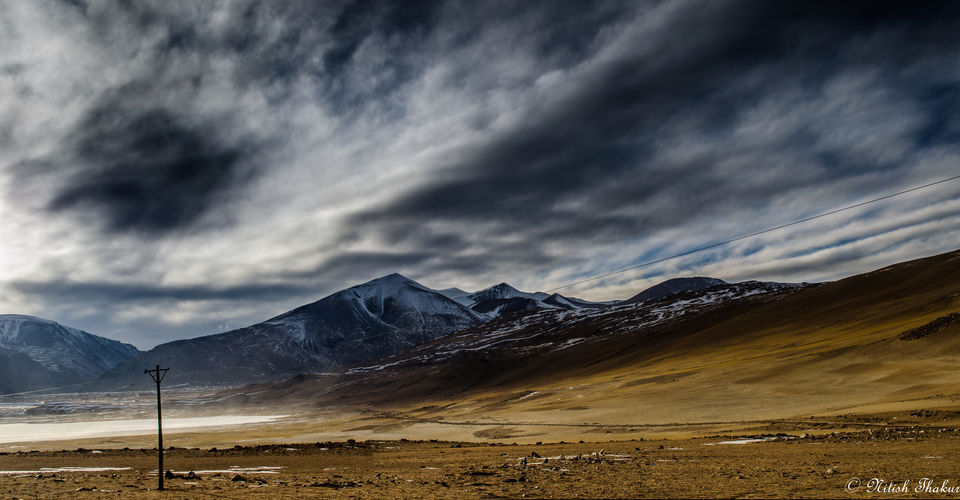 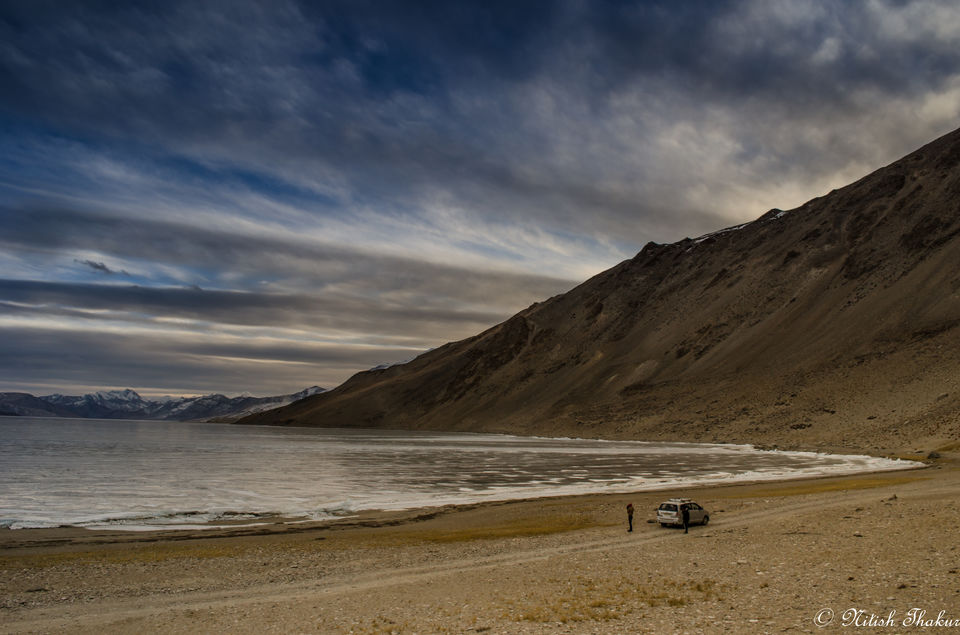 Walking over the frozen lake 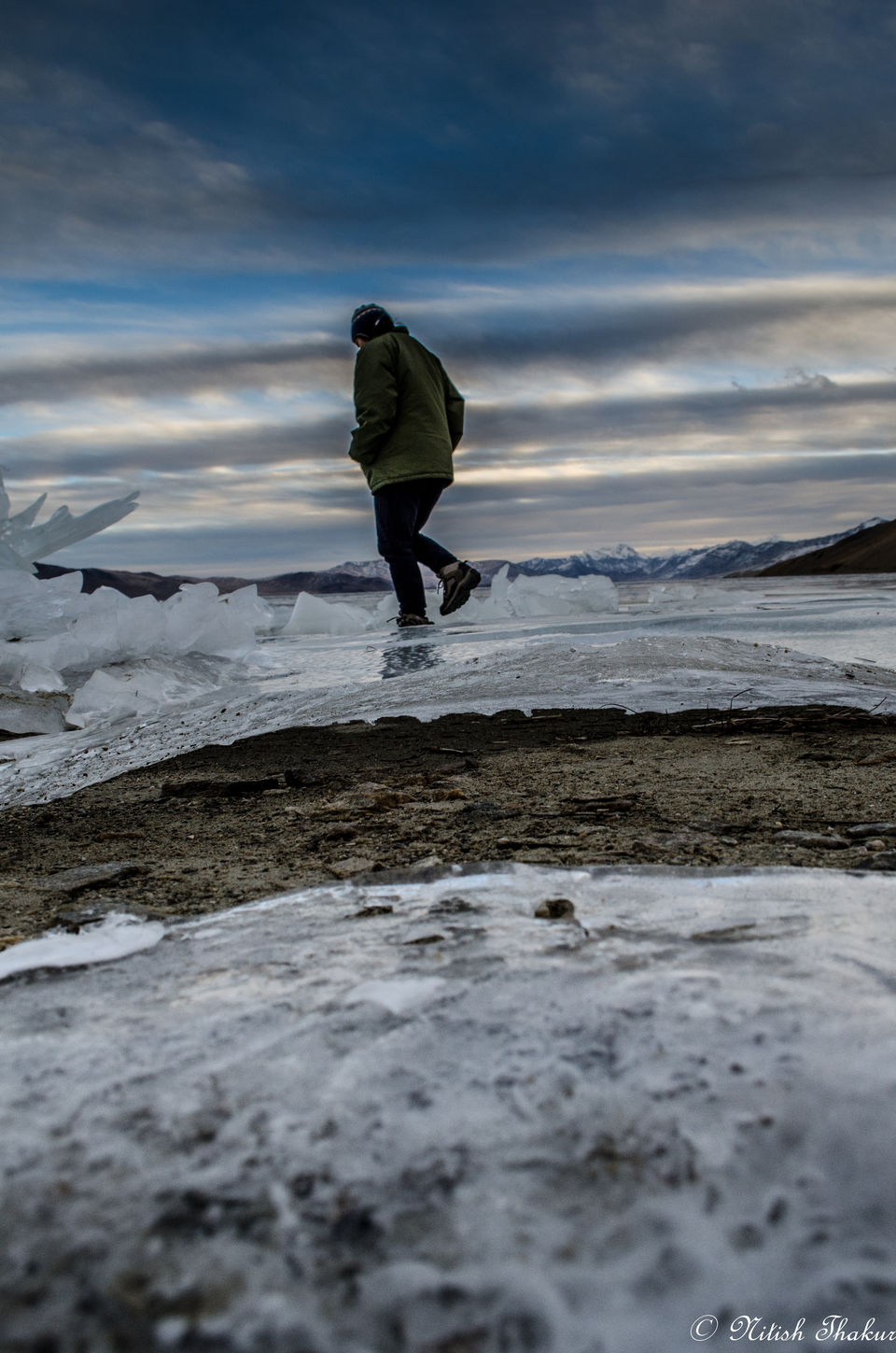 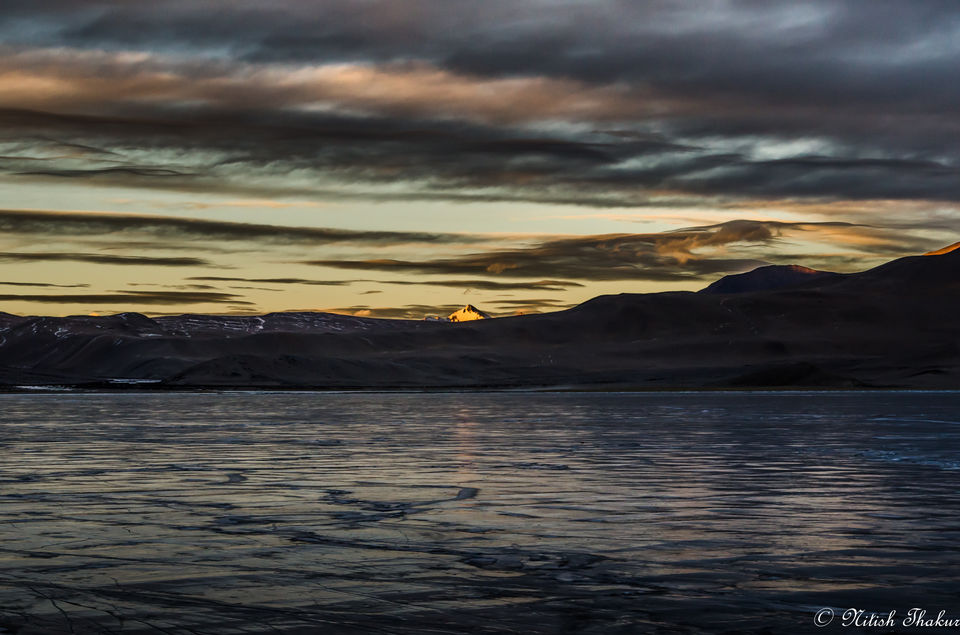 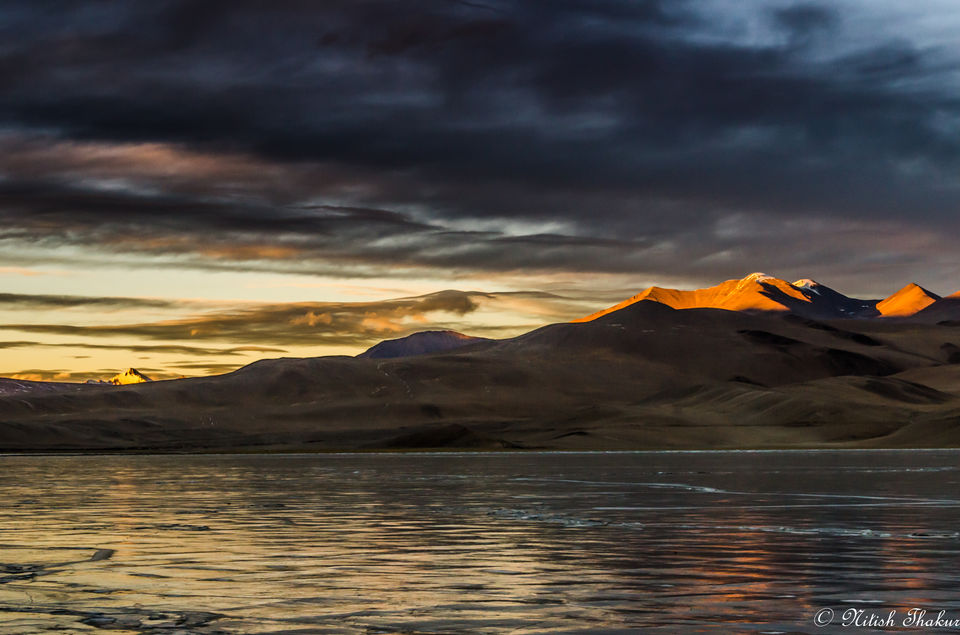 Capturing the sunset of Himalayas 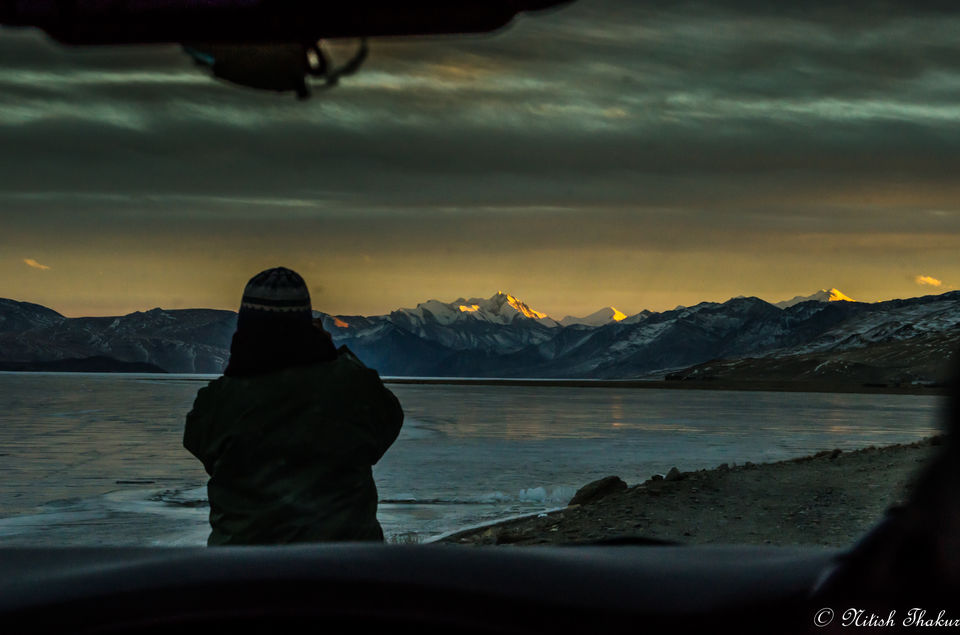 A vertorama to show the crackling surface of lake 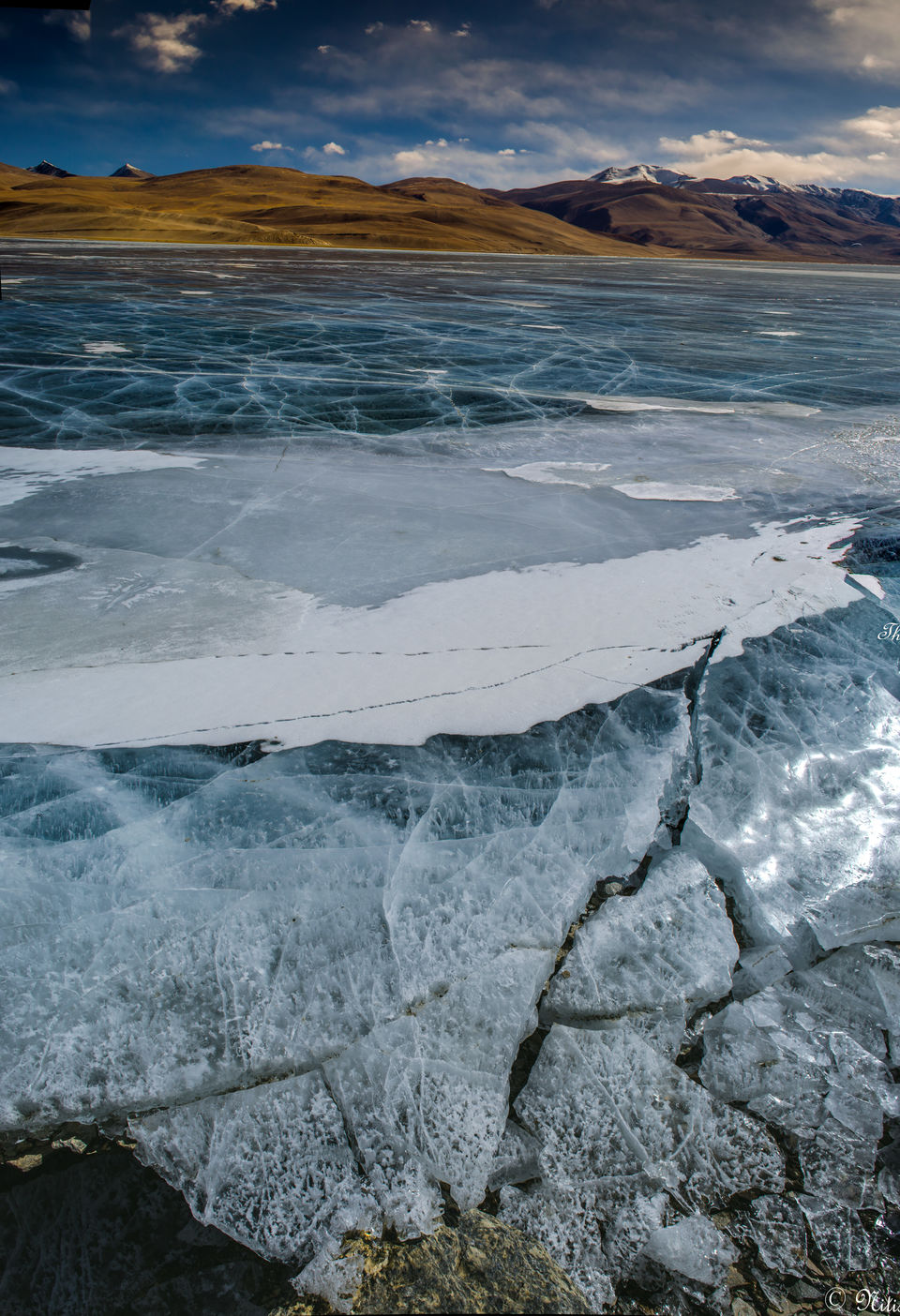 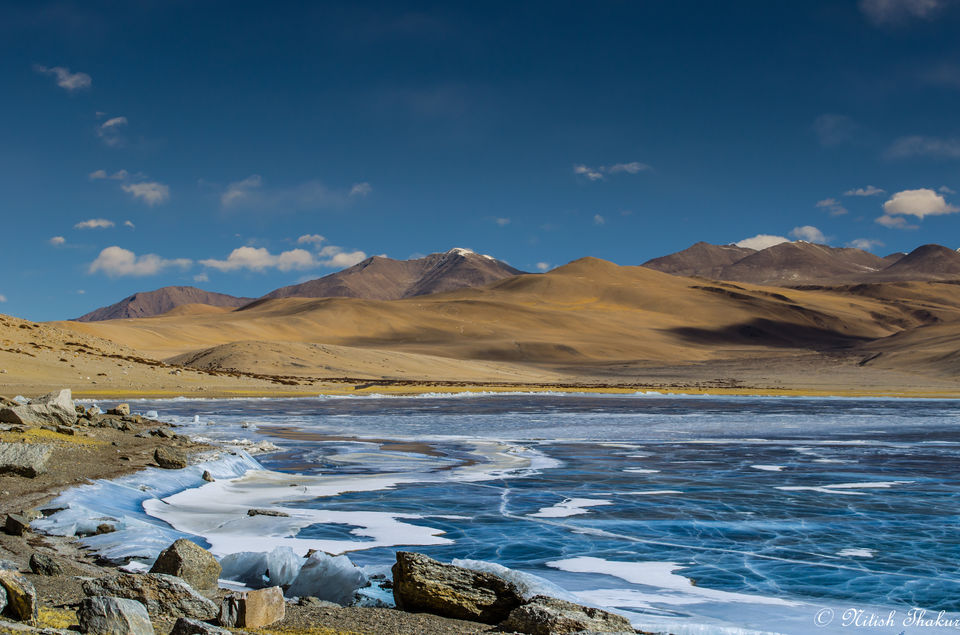 Stakna monastery in the valley near Zanskar range 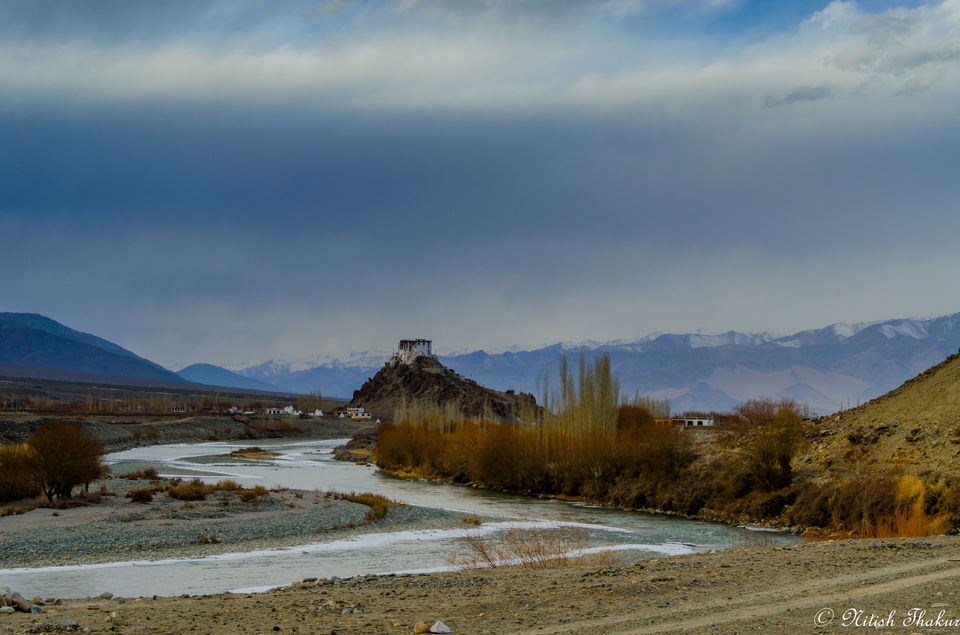 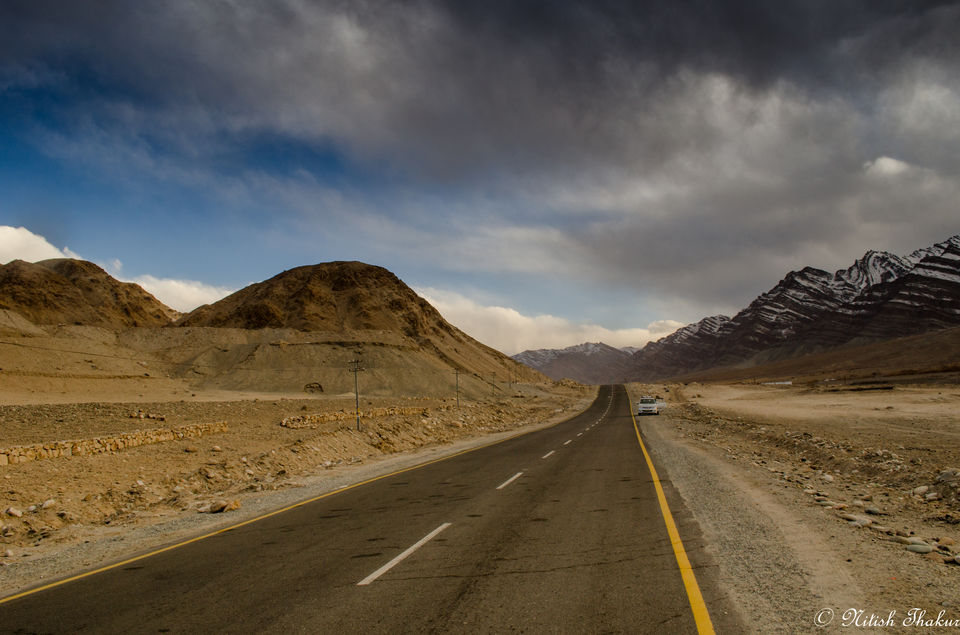 Some said, it wasn't a wise decision to visit Ladakh during peak winters of Himalayas but as I write this, I do it with more experience about Ladakh, the places, some new friends and some of amazing sunsets or landscapes, I have ever witnessed. Ladakh in winters is altogether different from what it looks like in summers, when it is buzzing with the sound of Enfields in summers.

I had booked the flights to Leh in November, around 3 months when I begun my journey to Ladakh. I had been to Leh on a bike trip in June last year but I always wanted to be there in Winters. I was on a office tour, traveling in a train when I got the message about discounted air flights; 15 minutes later I had booked the flights to Leh. Meanwhile, I prepared myself for the Winters of Leh both physically and mentally.

DAY 1. Arrival at Leh: Search for a place to stay

I reached Leh airport at 11 in the morning and as soon as I reached I went out in the town to look for a guest house to stay at. After around 2 hours I found one nearby the Leh market. After I settled at the guest house, I went straight to venture into the market to look out for people traveling solo or groups who are in for traveling around Leh. After some effort, I managed to find a group of 5 cousins leaving for Pangong Lake next day in the morning.

Day 2. Stuck at World's third highest motorable road without any transport and water for 2 hours

After I started out for Pangong in the early morning, I had no idea how the day will unfold. The 5 cousins in my cab had no water bottle which was a disaster waiting to happen. As soon as we reached closer to Chang la, which is enroute Pangong from Leh, the third highest motorable road at 17580 ft. above mean sea level.

The 5 people in my cab were dehydrated as well as unaccustomed to the thin air at the altitude of 5000 mtrs. One of the guy from those five, felt uneasy and started complaining to stop and turn back. As we reached the top of Chang la near the army camps, we had to stop as the guy's condition worsened. Thus, we had to carry the guy to army camp to provide supplementary oxygen.

After 25 minutes later we walked towards our parked car of whom the driver had turned the ignition off, which turned out to be the second biggest mistake of day. When we tried igniting the car, the engine gave up as the fuel was frozen since it was -15 *C outside. So, next two hours were spent heating the fuel lines of our car by burning gloves and waste clothes with Kerosene in bone chilling cold. One of the 5 boys, literally started crying. This was the second person I had seen crying on that mountain pass after the summer's trip last year.

After around an hour all the 5 guys decided to head back, when they found army buses heading towards Leh. Contrary to them, I decided to stay at the pass and look out for other people heading towards Leh. After an hour, just when we managed to start our car, I found another cab with a group of people who had dropped one of their passenger at Upshi due to bad stomach, thus leaving a vacant seat in the car for me. After they agreed that I can join in, I hopped in the car to resume my travel.

The new companions were amazing and I soon found out I was among like minded people. After we reached Pangong, first few minutes were spent to gaze at the eternal beauty of eternal beauty of the place. It was the first time, I walked on a frozen lake over the cold brackish waters. It was just 8 months ago, I had been to this place and it looked so similar but had a different aura since we were the only ones near the lake that day unlike summers.

After spending around an hour or so at the lake, we had to get back as the group had not planned to spend overnight at the lake, which is usually available at the guest houses in Spangmik village which is the last village you can visit without an Inner Line permit. At 7 pm in the evening we had reached Leh at our places where I exchanged contacts with the fellow travelers.

A lazy day which was spent mostly at the off summit near Leh Palace watching sunset, exploring the local market and reading some books at the local coffee shop.

The disc shaped blob in the middle of top left section of above picture is Andromeda Galaxy also known as Messier 31 which is 2.5 million light-years from us! You are watching it how it looked 2.5 millions light years ago. Literally staring back into the past, the time when homo sapiens came into existence!

While roaming around a met some other travelers traveling from different parts of India, sharing and listening to stories of each and everyone. One of these travelers, told me about this random vantage point near Shanti Stupa which had a beautiful view of the Khardung mountain range and Leh town with Zanskar range in the background as seen below.

Day 3. A random day traveling to Lamayuru, the moon land and back to Leh.

On the previous day, I had inquired about the buses leaving to Lamayuru and Kargil from Leh. On the early morning of day 3, I boarded one to Lamayuru. After 4 hours of journeying in the bus with frozen feet, which stopped after every 20 minutes.

I reached Lamayuru which to my surprise was desolated except a few kids playing around and asking for chocolates and chips. I ascended to the top of the mountain on which the village was spread.

The monastery was closed and after asking the caretaker, I found out that the remaining monks were meditating inside the locked rooms from last 3 months and will come out after another month. Hearing this I started walking towards the top, hoping to meet someone on my way up there and so I did. These 3 kids who were siblings with whom I spent next hour talking about their life in the village. They seemed quite content with what they had in their small village. I shared a snickers with them and photographed them which made them happy when I showed them the photograph on camera.

Next two hours I spent, reading this awesome book called "Into Thin Air' by Jon Krakauer based on 96' everest disaster. The environment somehow seemed amazing with snow capped peaks and the moon like landscapes in the valley.

After descending down the mountain, i decided to head back to Leh and took a lift from 3 guys heading to leh from Kargil.

Next day, I visited a friend I had made while on my way to Pangong. She and I convinced another couple to join in for a visit to Tso moriri lake.

Tso moriri, was a treat to the eyes. I found the landscape to be more enchanting and treating to the eyes as compared to Pangong. I had missed Tso moriri on my last trip to Leh, which I soon found out was a mistake.

The bank of lake was fenced with huge chunks of Ice blocks, as the sunset scattered it's last rays on the snow capped mountain peaks. Our car driver, Mr. Namgyal had arranged for a stay our phone at Korzok village by the side of lake.

When we reached the village it was desolated in the evening hours. A local family was running the only homestay in the village called Dolphin guest house.

We spent rest of the evening with the family sitting around a hot bukhari in their warm Kitchen while the outside temperature was way below sub zero. The night was a bit uneasy and most of us kept waking up throughout the night.

At around 6 in the morning, when it was still dark, I saw the moon rising from behind the Eastern mountains along with Venus. I wish, I could go back in time and capture how that moon rise looked perfect with the Himalayan landscape.

Next morning, we started out for Leh and while going back we decided to walk on the frozen Tso moriri, which was a breathtaking experience. The cold moving waters of lake and the thick ice sheet made never heard cosmic and crackling sounds, making the signs as if the lake was alive beneath the vast expanse of frozen ice.

We reached Leh back after having lunch at Chumathang, which is famous for its hot springs. On the way we came across various Changpa nomads with their flock of sheep.

The clouds in this region were something I had never seen before. After Googling, they appeared to be a rare Nacreous cloud shapes which form in high altitude region, have Iridescent colors, and they appear to change its color as the angle of viewing the clouds changes.

Day 6. When our flight to Delhi almost got cancelled and why I still want to visit Ladakh again.

As we boarded the flight for Delhi, I took a deep breath in the thin air of Ladakh for the last time and then the pilot broke the news that the right engine of plane has some fault in its rotor, which delayed the flight by 6 hours!

Personally, I had wanted to travel to more places during this season but I had to turn back and I hoped to go back there again this summer to visit and capture the eternal beauty of cold and harsh mountains. This trip had no itinerary, I had no fixed plans and the travel unfolded in a spontaneous way every day. From getting a bus to Lamayuru and hitchhiking with strangers, finding and making friends with complete strangers at the height of 17500 ft, capturing some unplanned shots, watching delightful sunsets.

Trips like these must be done once in your life, where you have no idea what is going to happen next.

Mountains have allured people from ages, they have withstand fierce weathers and changes around them consistently, standing tall and mystical for millennials; perhaps this is the virtue, people who love mountains have longed to acquire.

P.S Thank you Sangeeta for your Quechua Backpack and Harleen, for telling me the exact timing of my flight back from Leh or I would have been stuck at Leh which would have been great too! lol