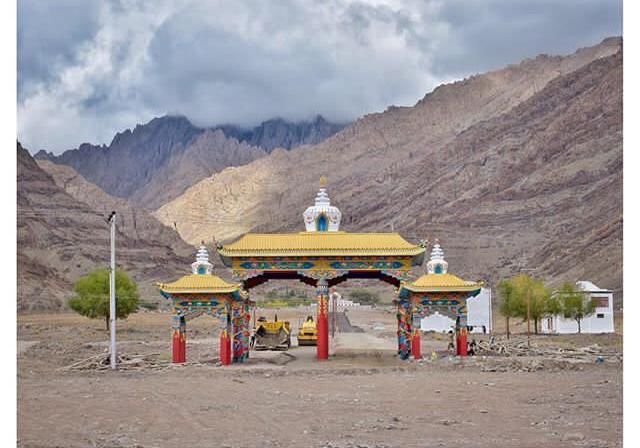 Leh & Ladakh, situated amidst the Great Himalayas and the Karakoram ranges in the scenic state of Jammu and Kashmir, are two of the most spectacular places in the world where scores of tourists from across the globe throng annually. Emblems of pure paradisiacal beauty, Leh & Ladakh are all about awe-inspiring landscapes, picturesque green oasis, scintillating monasteries and quaint hamlets. You are taken in by the breathtaking beauty the moment you land in this incredible mountain town. Get mesmerised by the amazingly pristine blue sky and transfer to a world of complete solitude admiring the mountain flowers, the snow covered peaks, the streams flowing by and the deep valleys. Monks in maroon robes, men trailing behind herd of sheep and the lilting mountain music, are some of the common sights and sounds of Leh &Ladakh.

Leh, located about 3505 meters above sea level, is the centre of Tibeto-Buddhist culture, evident by the thoroughly scattered colourful gompas or monasteries in the region. Being situated on the snow-clad fringes of the Himalayan Mountains, Leh offers its tourists the chance to experience the magical charm of Himalayas and to explore its rough and rugged terrains.

The land of Ladakh, renowned as the cold desert, holds immense pristine beauty for its beholder. It stretches from peak to peak, like a heavenly work of art done in strokes of brown, grey and purple with stripes of silver and speckles of green beside the Indus River.

With numerous tourist attractions to discover and availability of various adventure sports like mountain climbing, trekking and rafting on the Indus, a trip to Leh & Ladakh is always an exhilarating and indelible experience for travellers.

The best time to plan a Leh-Ladakh tour is in summers from June to September, when the temperatures are around 20-30°C and the region has clear, stunning views with warm and sunny weather. However, at night, the temperatures drop sharply.

You can plan your trip to Leh & Ladakh by road or you can fly to this exquisite land. If you plan to travel by road, you can either take the Manali-Leh route or the Srinagar-Leh one as they are open to vehicles in summer months. On your way, you’ll pass through some delightful sites and ranges. If you plan to take a flight from Chandigarh, Delhi, Jammu or Srinagar, take a window seat and catch some magnificent sights like that of the Zanskar River, the Tso-Moriri Lake, the Karakoram ranges and the mighty Himalayas.

Built in 16th century, the eight storied Leh Palace is the former palace of the king of Ladakh, but it is still owned by the Ladakhi royal family. The palace, resembling the famous Potala of Lhasa in China, has been damaged by the Kashmiri invasions of the past century. Once here, admire the magnificent palace wall paintings that have been smeared and scratched over the years and the small Khar Gompa inside the palace. What’s more, catch the brilliant view of colourful prayer flags flapping in the wind from the palace roof. If the weather is good, then don’t miss the chance to behold the snow clad Zanskar Range that looks close enough to touch even though it mounts from Indus’ other side.

The splendid museum built by the Indian army, the Hall of Fame, is situated near Leh and is definitely worth a visit. One section of the museum holds the immense memorabilia of the Kargil war. When here, see the images, biographies of eminent defence personalities; weapons used in the war; and enemy soldiers’ various belongings found at the war site.

While in the other section, completely dedicated to Siachen war and its heroes, discover the attires, daily instruments and multi layered shoes of the soldiers kept on display. Also find their food on display, mainly packed and frozen that was heated by igniting small balls of Hexamycin tablets.

The Shanti Stupa, an imposing white-domed sacred shrine positioned on a hilltop at Changspa, was built by a Japanese Buddhist organisation to honour 2500 years of Buddhism. Inaugurated by His Holiness the Dalai Lama in 1985, the Shanti Stupa houses some amazing Buddha statues, holy relics and holy books. It is indeed regarded as a symbol for spreading global peace. The Stupa gives marvellous look when the dusk starts approaching and it is illuminated by moon’s fainted light. When here, do enjoy the stunning panoramic view of the sunrise and the sunset with the Himalayas in the backdrop.

Located about 15 kms to the south of Leh, the Shey Monastery was built by Ladakh’s first king, Lhachen Palgyigon and for centuries it served as the royal residence. It is renowned for being home to the glorious 12m high copper statue of Shakyamuni Buddha that was built in 1633 and is brilliantly decorated with precious stones. It is Ladakh’s second largest statue.

Located about 45 kms south of Leh, the Hemis Gompa, built in 1630, is the biggest of all the monasteries in Ladakh. It is one of the world’s highest settlements, positioned at a height of 12,000 feet above sea level. When here, marvel at the beautiful paintings and frescoes on its walls; admire the well-preserved silver and gold stupas and the copper gilt Buddha statue; and behold the 12 m long Thangka painting, the largest in Ladakh.

The Hemis National Park that spreads across an area of about 4440 sq. km. is bordered by the Indus River. Being home to almost two hundred snow leopards, Asiatic ibex and Himalayan griffon vultures, the park is looked upon as the true epitome of Ladakh's wilderness in its finest form.

Founded in the 15th century by Gelukpa monks, the impressive Thiksey monastery, one of the largest in Ladakh, is positioned on a hilltop while the remaining complex spreads down beneath it. Home to over 500 monks, the monastery houses a 15m high statue of the Maitreya Buddha. It is also renowned for its assembly hall (Alchi Dukhang) that holds hundreds of rectangular prayer books, bound in silk and piled between wooden covers.

Located about 14 kms from Leh, the present residing palace of the Royals, the Stok Palace, built in 1825 by King Tsespal Tondup Namgyal, is also a museum, the only one that is opened for tourist excursion activities. The 77 room edifice showcases thangka paintings, the royals’ attire, crowns and other royal ornaments and offers a taste of the region’s historic culture.

Located about 50 kms from Leh on the Leh-Kargil-Srinagar national highway, the magnetic hill is a famous tourist spot. The hill is believed to have powerful magnetic properties that pull cars uphill and forces aircrafts to increase their altitude to avoid magnetic interference. It is actually an optical illusion caused by particular layout of the hills that makes a very little downhill slope to appear as an uphill slope. Thus, a vehicle left out of gear appears to roll uphill against gravity.

Located at an altitude of 5,602 m, Khardung La pass is the world’s highest motorable pass situated about 40 kms north of Leh. This amazing pass connects the capital of Ladakh to the Siachen Glacier and a drive from Leh en route this pass is a scenic and an unforgettable experience.

The Nubra Valley is situated to the south of Leh, nestling between the Ladakh and the Karakoram ranges beside the Shayok valley. The Nubra and Shayok rivers keep the region immensely green with abundant growth of dense sea buckthorn on the valley slopes. The Nubra valley is renowned as “the valley of flowers”, being home to some of the most vibrant, colourful and beautiful flowers growing amidst lush green landscape. The place offers a tranquil and serene ambience to its visitors and trekking on the colossal and rocky trails of this valley is a truly an exhilarating experience.

One of the most famous places to visit in Leh is the Pangong Lake, located about 160 km from Ladakh. The crystal clear blue waters of the lake along with pleasant weather all year round make it a magnificent spot to enjoy solitude. It is the world’s highest brackish lake being at a height of 4,267 m above sea level and the largest brackish water lake in Asia, being 2 to 10 kms wide and 150 kms long. Once here, see reflection of the entire Changchenmo range and be bewitched by its scenic beauty. Don’t forget to capture the picturesque views of this marvellous place.

The tranquil Tsomoriri Lake, also famous as the “Mountain Lake” is situated at an altitude of 4,595 m amidst the beautiful mountain ranges in Leh in the upland region of Rupshu. The sparkling blue lake measuring about 4-6 kms in breadth and about 28 kms in length, with a backdrop of stunning snow-clad mountains, is a stunning site to relax, thanks to its serenity. It is also the breeding place for diverse water birds, especially the brahminy duck, the bar-headed goose, the brown headed gull and the great crested grebe.

Arrive at Kushok Bakula airport in Leh and transfer to your hotel. After lunch, visit the Leh Palace and the Shanti Stupa. Later in the evening, stroll around the local market. Overnight stay at the hotel.

After breakfast, drive to visit the Hemis Monastery and on the way visit the Thiksey Monastery. After that visit the Shey Palace and later visit the 3 Idiots School Campus Sindhu Darshan. Overnight stay at the hotel.

After breakfast, go for sightseeing the 1000 year old Alchi monastery and then proceed to Moon Landscape and Lamayuru. Later drive back to Ulleytokpo. Overnight stay at the camp.

After breakfast, depart from Uleytopko and proceed to visit the Likir Monastrey and see the magnificent three storeys Dharma Wheel Gompa. Then drive along the Indus River and visit the Magnetic Hill and Pathar Sahib Gurudwara. Further hike up the Basgo Palace and the Leh Hall of Fame. Overnight stay at the hotel.

After breakfast, drive to the Nubra Valley through Khardung La pass. Reach Hundur by afternoon and the rest of the day is free for you to explore Hunder Villages, Deskit and to take camel Safari in Sand Dunes. Overnight stay at the camp.

After breakfast, visit the Diskit Monastery and later drive back to Leh via same route. Rest of the day is at leisure to explore the Leh market. Overnight stay at the hotel

After early breakfast, drive via Changla Pass to reach Pangong Lake. Relax and enjoy the scenic beauty of the lake. Overnight stay at the camp.

Drive back to Leh and the rest of the day is at leisure. Overnight stay at the hotel.

After breakfast, bid farewell to Leh and proceed to the airport to board your homeward flight.