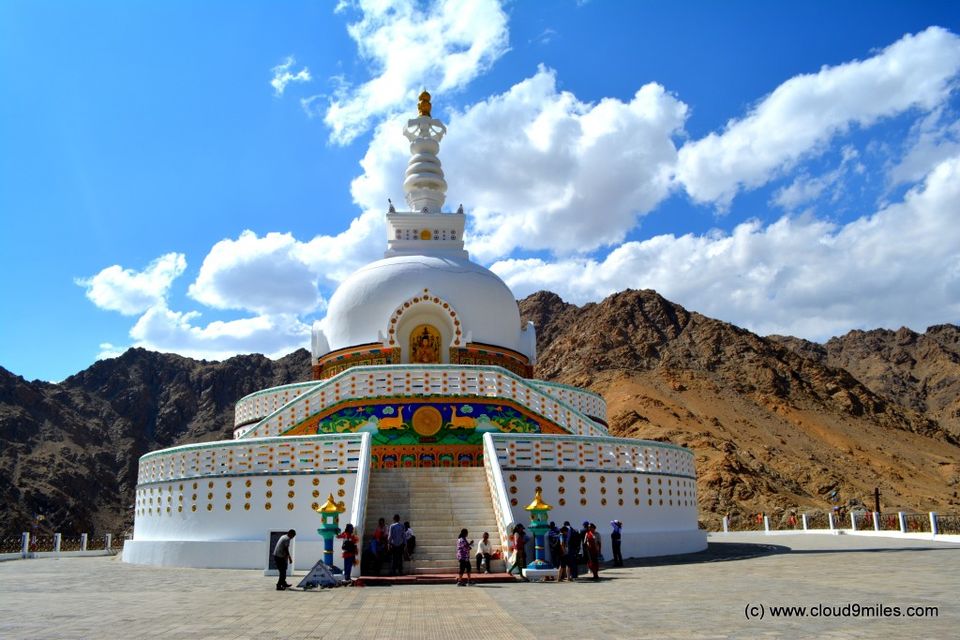 Leh, a high altitude cold desert city in the Himalayas, is the capital of the Ladakh region in northern India's Jammu and Kashmir state. Leh receives very sparse rainfall and snowfall due to low level of precipitation. Leh witnesses long, harsh winters from October to early March, with minimum temperatures well below freezing for most of the winter. Leh is at an altitude of 3524 metres (11,562 ft), and connects via National Highway 1D to Srinagar in the southwest and to Manali in the south via the Leh-Manali Highway. Originally a stop for trading caravans, Leh is now known for its Buddhist sites and nearby trekking areas. Massive 17th-century Leh Palace, modeled on the Dalai Lama's former home (Tibet's Potala Palace), overlooks the old town's bazaar and mazelike lanes. Leh was an important stopover on trade routes along the Indus Valley between Tibet to the east, Kashmir to the west and also between India and China for centuries. Leh was a stopover for us as well on our expedition of Ladakh region and explored the city in parts.

Leh is an ideal place to get acclimatized to high altitude conditions and especially if someone has reached here by air as for them there is a sudden rise in elevation. Few of our family members joined us via air and we all took a day's leisure in this maze like town in Himalaya. The small lanes of Leh especially Changspa Road looked very similar to Calangute-Baga Road of Goa with lots of restaurant, guest houses, and foreign tourists. We roamed around in these lanes and explored the shopping options available. Bikes & cycles were easily available on rent. ATM facility is easily available in Leh and most establishments do not accept any form of electronic payments.

Here are the few sights that we covered during our stay in Leh.

Shanti Stupa is a Buddhist white-domed stupa (chorten) on a hilltop in Chanspa, Leh district, Ladakh, in the north Indian state of Jammu and Kashmir. It was built in 1991 by Japanese Buddhist Bhikshu, Gyomyo Nakamura and inaugurated by the Dalai Lama in 1983. It was a part of the Peace Pagoda mission. The Shanti Stupa holds the relics of the Buddha at its base, enshrined by the 14th Dalai Lama. The reflection of peace at Stupa was omnipresent and can be clearly sensed. The Shanti Stupa overlooks the city of Leh, providing panoramic views of the city, the village of Changspa, Namgyal Tsemo in the distance and the surrounding mountains.

Leh Palace is a former royal palace overlooking the Ladakhi Himalayan town of Leh. Modelled on the Potala Palace in Lhasa, Tibet, the palace was built by King Sengge Namgyal in the 17th century. The construction of the palace on the Tsemo Hill was initiated by Tsewang Namgyal, the founder of the Namgyal dynasty of Ladakh in 1553 and was completed by his nephew Sengge Namgyal. The palace was abandoned when Dogra forces took control of Ladakh in the mid 19th century, and the royal family moved to Stok Palace. The dilapidated nine storey palace is getting restored by the Archaeological Survey of India. The palace provides panoramic views of Leh and the surrounding areas. A nominal entrance fee is charged from tourists to visit Leh Palace. One can also visit Namgyal Tsemo after a stiff climb of stairs near Leh Palace.

Sangam means convergence or confluence. The sangam point is around 30 KMs west of Leh with a spectacular sight of two diverse rivers meeting - the Indus and Zanskar. Zanskar looks muddy, while the Indus looks more greenish. Sangam is also the end point of river rafting that starts 20 KMs ahead in Zanskar River. We also booked our group for the rafting expedition and had a horrible experience with Gatsol Tours. Finally, after heated argument we did not do the rafting. They took tourist as granted due to large influx during peak season and do not give respect to them. The owner even does not have the courtesy to speak politely with women. A very bitter experience indeed and we would suggest to NEVER EVER contact Gatsol Tours for any expedition. It does take some time to get out of such kind of experience but we just dumped this experience and moved ahead.

While returning from Sangam Point we visited Gurudwara Pathar Sahib situated alongside the Srinagar - Leh Highway. We got the much needed peace and energy for our onward sojourn. It is very beautiful and it was created in memory of the founder of Sikh religion and the first guru, Guru Nanak Dev Ji. We took the blessings, ate langar, and spent some time at gurudwara before proceeding towards Leh.

Overall, we relaxed in the quaint environment of Leh and explored the tougher regions of Ladakh. A stopover that helps in acclimatising to high altitude and gives much needed break from a treacherous sojourn.