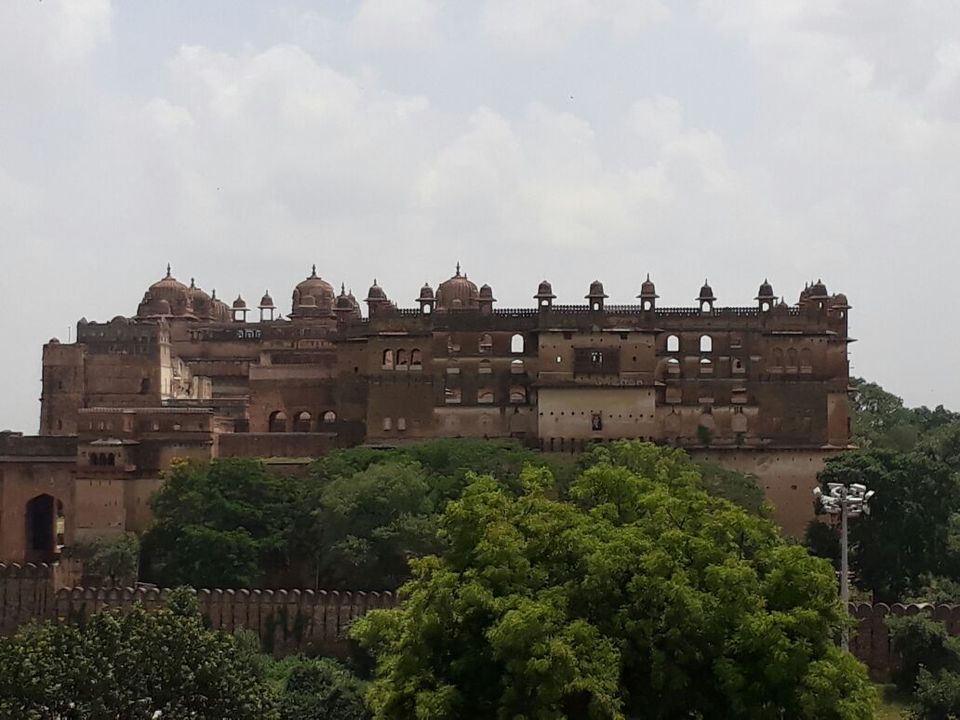 After having rapid one-one day tours to Gwalior and Khajuraho, we reached our third destination Jhansi late night. On our way to our hotel Sheela Sree, we stopped by to have samosas and chai, it was one of yummiest and delicious samosa I had ever had, costing just 2 rupees per samosa.

Early next day, we took shared auto to Orchha which is about 16 km from Jhansi, where we all were packed in a way that if one person fall the rest will follow the clan! Situated on the bank of river Betwa, Orchha is known for its grand palaces, intricately carved temples and striking forts. The medieval architecture of the palaces and temples tell the story of this city's rich cultural heritage. The location of the city in itself is picturesque with hills and lush greenery around making it picture perfect.

We first went to Ram Raja temple which has astonishing architecture adorned with marble courtyard and colorful walls. It was serene experience to be able to attend morning aarti with enormous number of devotees. This beautiful Ram temple has an intriguing history behind it. The Idols which were supposed to be installed in the magnificent Chaturbhuj temple were kept on the ground where this temple now stands. But once kept on the ground, the idols could not be budged. This was then marked as holy place and temple was constructed where the idols were kept.

Just behind this is Laxminarayan Temple which portrays the excellent creativity in the artisans of the past as the architectural style involved in the creation is a blend of temple and fort. The main deity is Goddess Laxmi. Though beautifully constructed, the temple lacks maintenance!

Then we walked till Orchha Fort which is situated on the island on Betwa River. The scenic location apart, the fort has more to offer. It houses many palaces and temples. The three most important palaces seen here are Jahangir Mahal, Raj Mahal and the famous Rai Parveen Mahal.

Although you can be hounded by the guards but there is no actual need of guides here, it will be fascinating to roam around in the palaces on your own. It will take more than 4 hours to have a pleasant tour to the entire fort.

Jahangir Mahal reflects the architectural splendor that prevailed in Orchha in the past. The views from the multi-storied balconies in the palace are spectacular. This place is a classic example of Mughal architecture. The domes are built according to Timurid customs and the gates or Iwans are large enough to allow entry of War elephants. Also, the relatively higher position compared to surrounding area made this palace a very important palace for the Mughals. The narrow ladder like structures reminds me of the hidden escapes! It’s a picturesque monument where everything just looked magnificent and superbly amazing

Raj Mahal ranks amongst the most ancient historic monuments in Orchha fort. The palace is constructed beautifully with impeccable architecture and breathtaking grandeur. The palace has magnificent towers and spectacular murals which will make a visit here an absolute delight for any art enthusiast.

Rai Parveen Mahal, which is in ruins, now was a beautiful palace with lush gardens surrounding it. Rai Parveen was a poetess and a dancer. Her charm so attracted the king Indramani who built the palace for her.

We wanted to enjoy boating in the Betwa River, however because of scant rains, our plans were ruined and we headed back to the hotel. Since it was 15 August, most of the places in Jhansi were closed so we ended up having a long walk to the market followed by eating Pizza and then back to hotel.

Next day, after having breakfast, we went ahead to visit Jhansi Fort.

I loved the poem in our hindi books about Rani laxmi bai and her courage had always inspired me to core, I was enthralled that I will be visiting the place where she lived, practiced fights, planned for 1857 rebel, and what not!

The historic Jhansi fort extends to a vast perimeter of 15 acres and with a mammoth strengthening wall on the sides, it proved as a tough intrusion for the enemies in the past. For the entry into the sprawling lawns of the fort, there are 10 entry gates. Once inside the Jhansi fort, one is expected to come across the two famous temples-Shiva temple and Ganesh temple. Besides the temples, the fort also houses the Panch Mahal and Kadak Bijli canon which was highly used in the freedom struggle of 1857. Other attractions of the fort include Baradari, Shahar Darwaza, Grave of Gulam Gaus Khan, Execution tower and Kal Kothari.

There is also a memorial board present, which reminds the death defying jump of Rani Lakshmibai on her horseback in an attempt to flee the British army after a heroic fight.