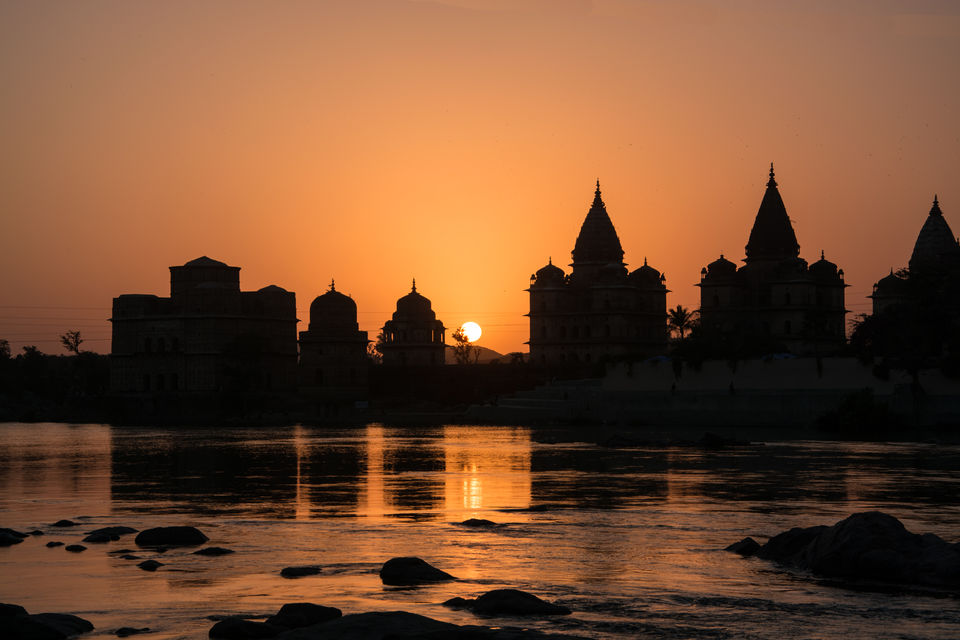 It was on the second day of our stay in Orchha, while standing atop a palatial complex with the whole town spread out in front of us, when it occurred to me that this is a town which is frozen in time. If we could somehow remove the modern settlements, clean the old buildings and redecorate and refurnish the interiors then the current Orchha wouldn’t look very different from the town that had once served as the capital of the Bundela Kingdom. Even the narrow bridge over River Betwa, connecting the town to the nature reserve on the opposite bank, gave more of a 16th century vibe than a 21st century one.

Orchha is just 230 km from our hometown Kanpur which meant a drive of four hours. We started for Orchha by 7:30 am. The road was in a pretty good condition for most part. At about 11 am we crossed the border from UP to MP and a few minutes later took the turn for Orchha. We soon crossed the Orchha railway station and then passed under an old gate which probably once marked the boundary of medieval Orchha. Two arched gates followed this old gate and welcomed us into the main town. Driving along the main road, we soon reached the heart of the town where most of the major sights were located.

Based around two central courtyards and offering stunning views of the river and cenotaphs from its beautiful gardens, Amar Mahal was actually a renovated palace built in the classical style of the region. The interior decoration was done in a way which provided an old world charm to the place. Our double deluxe room was spacious and comfortable with a private patio. On each of the two evenings that we spent at the hotel, there was a song and dance performance in one of the central courtyards. 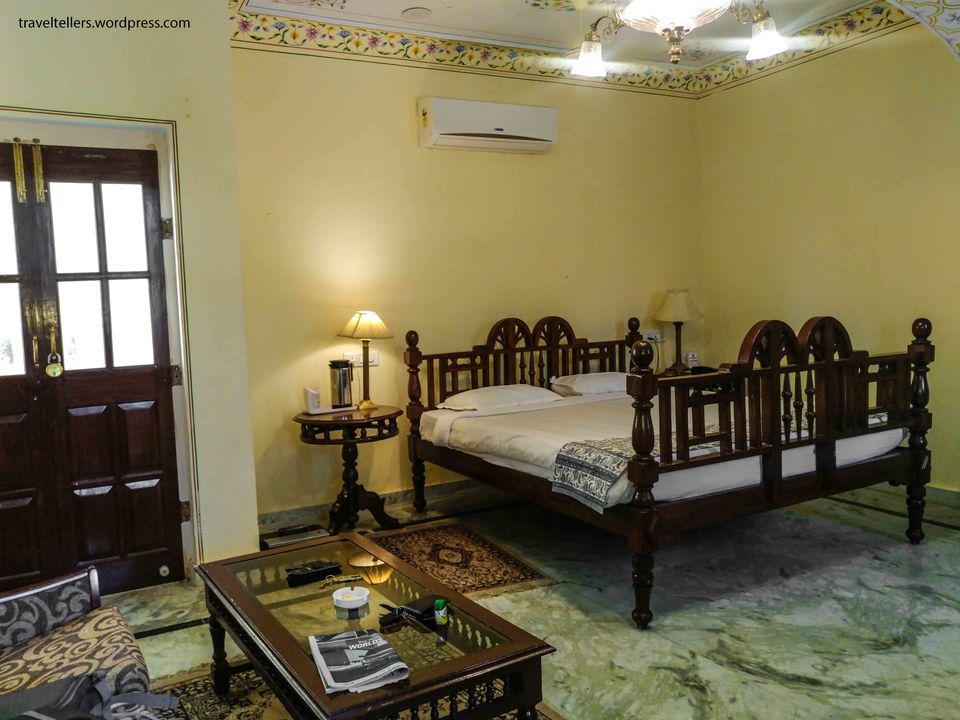 One of the major tourist attractions of Orchha is a group of 15 cenotaphs clustered along the Kanchana Ghat on the southern bank of River Betwa. These structures, built in the memory of kings and other important members of their clan, are locally known as Chattris. The chattris were located just a few metres away from our hotel and we visited them after having a delicious lunch at the MP government’s Betwa Retreat hotel situated just across our hotel.

We visited the cenotaphs during the noon time thus there were very few tourists around and we had almost the entire place to ourselves. As we walked from one memorial to another we observed that although they differed in size, most of the memorials were three-storey structures built in the style of a temple with a shikara on the top. Although one could easily walk up to most of the cenotaphs and see them from up close, few of the cenotaphs had restricted access. These cenotaphs were located inside a walled complex and were surrounded with beautiful gardens. A ticket costing Rs. 10 was needed to enter the complex. We spent some time talking to the ticket checker and came to know about some interesting things regarding the cenotaphs. One of them was that it was forbidden to enter and climb the cenotaphs because they were nesting places of vultures! Well, I am not sure I would even want to get close to those cenotaphs after that piece of information.

RAJA MAHAL, which literally translates to King’s Palace, was one of the earliest structures built in the fort with its construction starting in 1538 AD. It was the first palace that we visited and despite its simple exterior, the interior of the palace was quite beautiful. The symmetry of the palace, built around large open courtyards, was quite stunning but the defining feature of this palace was its exquisite and colourful murals which were preserved extremely well in some of the rooms.

One thing we loved about the place was that unlike most monuments, we had an almost unrestricted access to all parts of the palace which included access to the very top of the palace. We had to climb a long flight of narrow stairs to reach the top but it was totally worth it because from the top of the palace we had a wonderful view of the town, the river, the monuments as well as that of the interiors of Raja Mahal itself. We walked along the parapets of the palace taking in the view from all sides and then came down and exited the palace.

JAHANGIR MAHAL was the second palace that we visited in Orchha fort. This palace was built by one of the most affluent Bundela ruler – King Bir Singh Dev – in the early 17th century to commemorate the visit of Emperor Jahangir to Orchha. Bir Singh Dev was a vassal of the Mughal Empire and this can be seen clearly in the architecture of the palace which has a lot more Islamic influence as compared to Raja Mahal. This combination of Indo-Islamic architecture also resulted in this palace being more beautiful than Raja Mahal. The distinguishing features of Jahangir Mahal palace were its domes, cupolas, stone carvings, latticed windows and elephant brackets supporting the first floor balcony.

Just like in Raja Mahal, here too we climbed to the top of the palace and were rewarded with some great views of the river and rest of the fort complex which consisted of ruins of mansions, temples and other structures. Later, we also saw the back gate of the palace which had extremely beautiful and intricate carvings and was surrounded by statues of elephants on both sides.

Ram Raja temple is a quite unique temple in many ways. It was originally a palace which became a temple by accident. According to legend, wife of King Madhukar Shah was a devotee of Lord Rama and thus got a statue of the god from Ayodhya which was to be placed in the magnificent Chaturbhuj temple that was being specially constructed next to the palace for enshrining this statue. Later she realized her folly when it dawned on her that according to a promise made by her, the god’s statue, once placed somewhere, cannot be moved to any other place. Thus the palace itself became the temple. Now, since Lord Rama was placed in a palace hence he is worshipped as a king rather than a god, which is unheard of anywhere else. 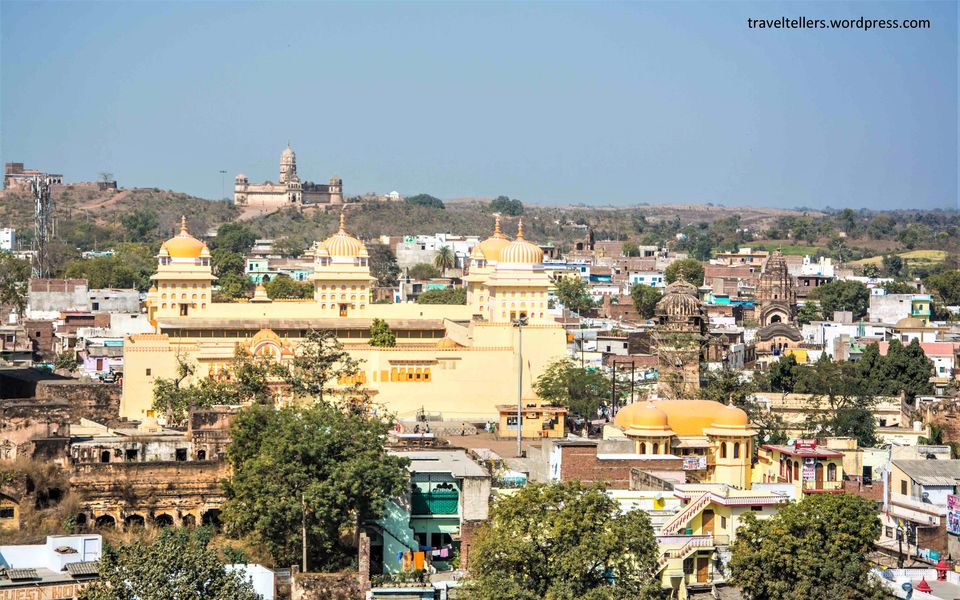 We did not actually enter the Ram Raja temple but went straight to the Chaturbhuj temple which was right next to it. It was immediately obvious that this temple was built for a special purpose (to house the statue of Lord Rama). Built on a massive stone pedestal and towering 105 m high from ground, this majestic temple was visible from most places in the town. The best spot to see this temple was the top of Raja Mahal which we had already been to earlier in the day. We climbed some steep stairs and reached the main hall of the temple but it was quite bare from inside.

The Chattris of Orchha are not only a tourist attraction but they also provide a spectacular backdrop for the setting sun which can be enjoyed from the other side of the bridge. Unfortunately, we ended up resting a little bit too long and missed the sunset by a few minutes. By the time we crossed the bridge it was dusk and even though it was beautiful at that time of the day too, our wish to see the sunset was unfulfilled. So we returned again the next day and for once the scene in front of us justified the hype. The orange sun slowly disappearing behind the domes and shikaras of the Chattris while being reflected in River Betwa; it was simply magnificent.

Our second day in Orchha was all about exploring the historical structures of the town starting with its crown jewel – the vast Orchha Fort.

After our visit to Jahangir Mahal was over we went to Sheesh Mahal, a palace that has been converted into a hotel, and offers guests a chance to live in same surroundings as the royalty of Orchha. We had a sumptuous lunch there and then proceeded to see other structures in the fort complex.

As we strolled through the fort complex after lunch, we came across several general and military structures such as bungalows of important personalities and officers, a large arched gate (Shahi Darwaza), royal baths (Hamam Khana), cannon storage facility (Tope Khana), camel stable (Oont Khana) and Rai Praveen Mahal (another small palace). Rai Praveen Mahal was constructed by King Indramani Singh for the beautiful poetess and musician – Rai Praveen. We had read a lot about the palace and the beautiful garden alongside it but were eventually disappointed by it. The grass of the garden had withered and had acquired a brown hue even in the month of February. 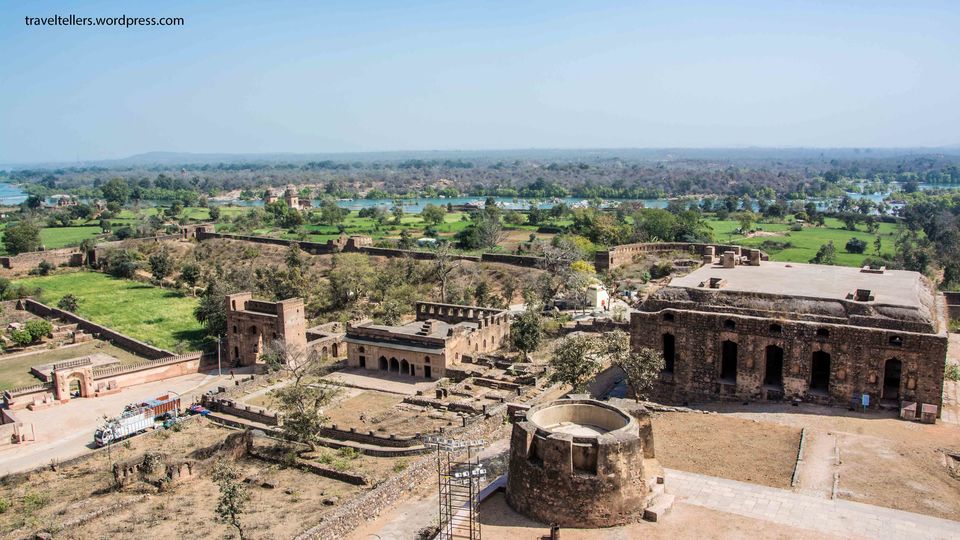 Later in the afternoon we visited the Lakshminarayana temple. This temple was slightly far from the town centre hence we drove to the temple. It proved to be a good decision as the temple was built on a hillock and having a car saved us the climb. Lakshminarayana temple was built in 1622 AD by Bir Singh Dev and had a very unusual architecture structure which looked like an amalgamation of fort and temple architectures. Orchha certainly seems to have a fascination with unusual temples.

To enter the temple one needed a ticket which had to be bought at the fort. The temple also provided a superb view of the town centre but the best part of the temple wasn’t the views or its architecture. It was the extremely stunning murals and frescoes in the interior of the temple. Based on different themes, these exquisite paintings were some of the finest examples of Bundela art and had survived the ravages of time quite well. Here too, because of the unrestricted access, we climbed to the top of the temple and even went inside the temple tower after which we drove back to see the famous sunset of Orchha.

This blog was originally published on 'TRAVELTELLERS'.