Other Means of travel: train, private buses and by road (car).

Best time to visit: all year round

In this piece, I will try to show the diversity and beauty of Hampi with more pictures. This time I went to Hampi with three of my friends and it was the first time for them except me, so I was a sort of guide!! Who won't love to show off the place. I loved my role. In the meantime I saw many things which I might have missed or didn't give much time to in the first time.

DAY 1: Started the day at the ruins of the market place of the 12th century. It was just half a kilometer from Virupaksha temple complex. It is also known as Hemkut hill, or the bazar street. Before they used to be shopping complex but now only the skeleton of the structures left, with roofed corridors.

To the opposite of the bazar is another temple complex - the Krishna temple complex. It is enclosed by high compound walls. The temple seems abandoned (protected by ASI) but it was very clean with less crowd.

Nearby to the Krishna temple complex is the iconic monolithics of Lakshmi Narasimha and the Shivalinga. The Lakshmi Narasimha monolith is 6.7 metres tall, and is the form of lion, as Narasimha according to Hindu mythology is the fourth incarnation, the man-lion form of Lord Vishnu.

And then next to the Lakshmi Narasimha monolith structure is a monolithic Shivalinga about 3m tall, made of stone.

From there we walked and reached the Hazara Rama temple complex. This was a temple of the royal family of Vijayanagar empire.

Then in the same vicinity is a huge platform of stone known as Mahanavami festival platform or the great platform.

Then we moved towards the spectacular Vittala Temple complex, which features the famous stone chariot of Hampi and the ruins along the backdrops. It is one of the iconic symbols of the Indian history.

As you arrive there, first you see the remnants of something like the Krishna bazar, but is actually the Vitthala temple bazar ruins.

Here one can notice the towered entrance, the top portion of the large brick has collapsed as visible in the picture. The gopura or the entrance tower has been greatly restored with much restoration works.

One can see beautiful carved statues and intricately carved sculptures in the temple complex on its various wings as can be seen in the pictures below.

Then near the river flowing along the Vittala temple flow with is the "Purandaradasa Mantapa" - situated along the Tungabhadra river. This place is dedicated to famous musician from Vijayanagar - "Purandara Das", as said he composed music sitting near the river bank and with the whole valley engulfed in his music.

After walking along the river, we took the coral boat ride - I didn't want to miss it. Of-course it is not something to be missed here!!

After that at the end of the day, being tired after so much walk and sight-seeing, we wrapped up by seeing the hill surrounding the ruins where Ram-Sita-Lakhsman were believed to have stayed for some time during their exile with their friend Hanuman (The Ramayan Saga!!). Some saree lines of Sita as she was dragged away are believed to be there in the hills, alongside a cave where they stayed. (Hindu Mythology)

DAY 2: Decided to go to the opposite side of the river. Hired two bikes after crossing the river in a small boat.

While crossing the river 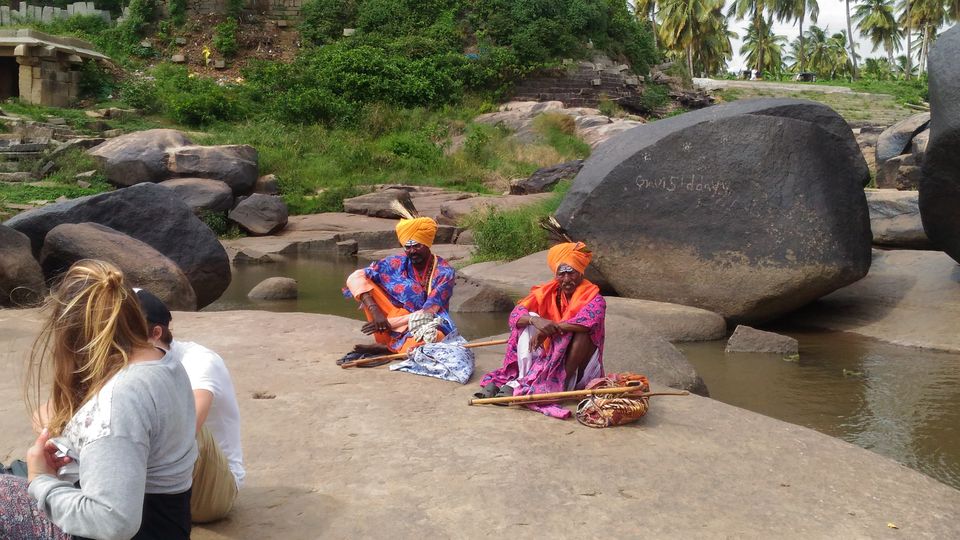 Renting bikes from the day 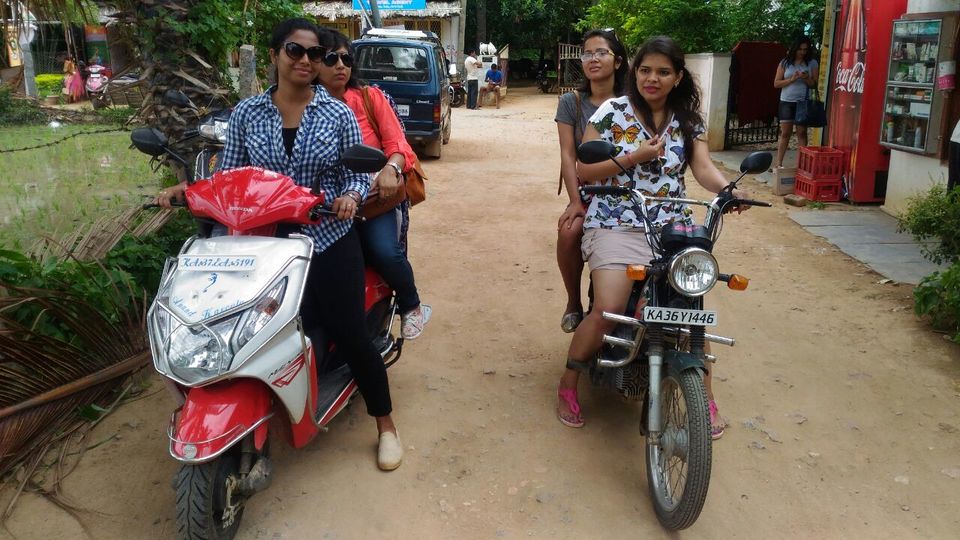 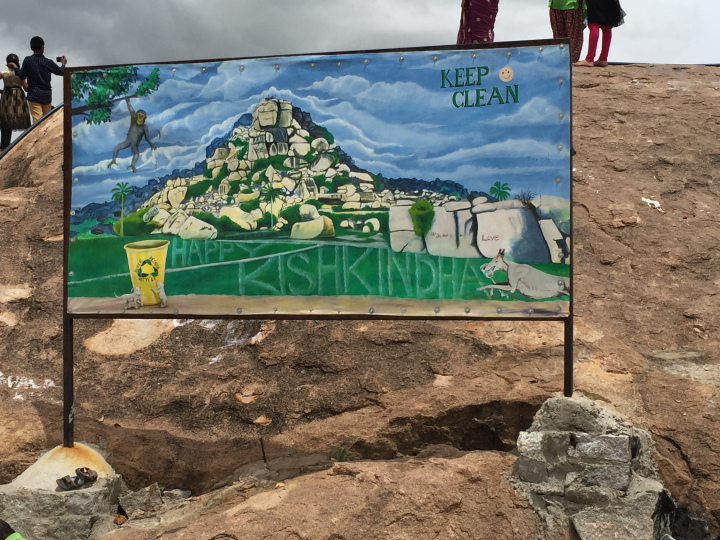 On the top of the temple 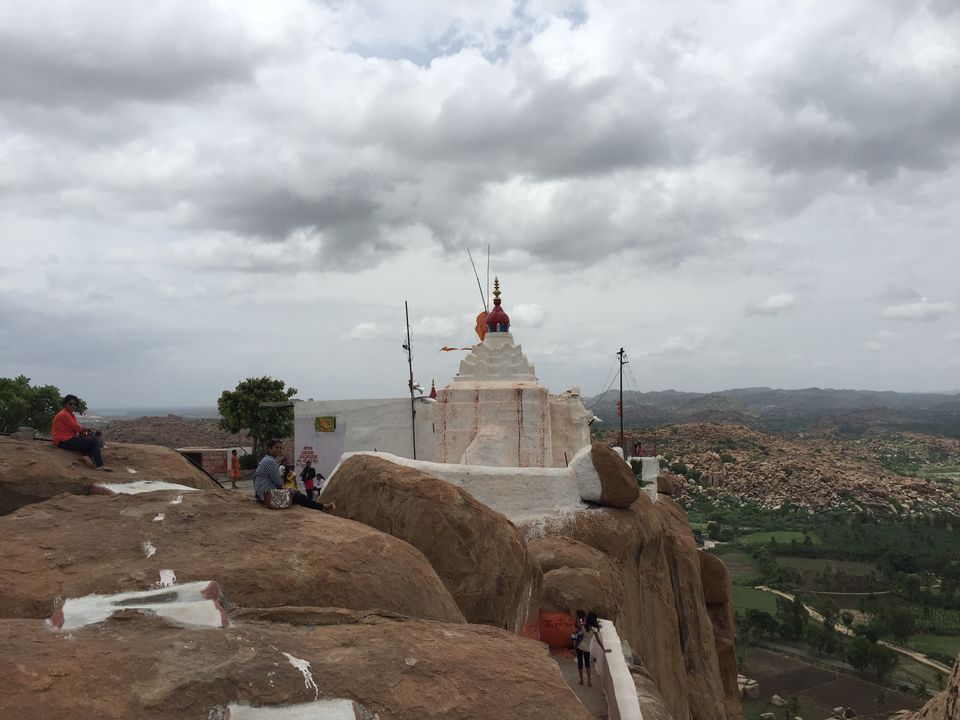 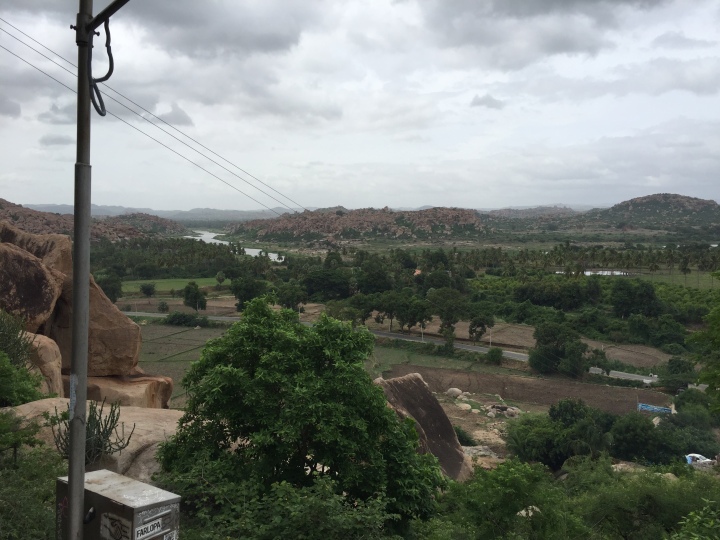 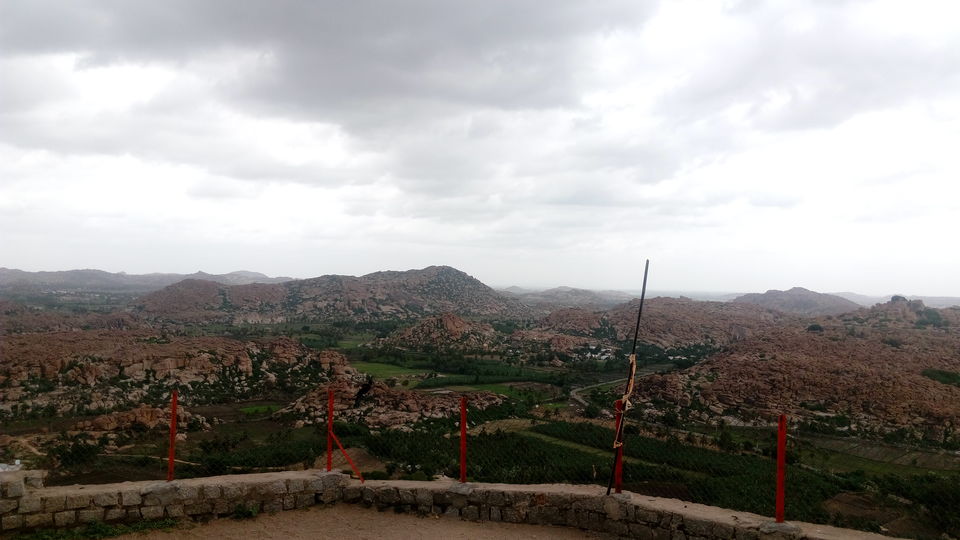 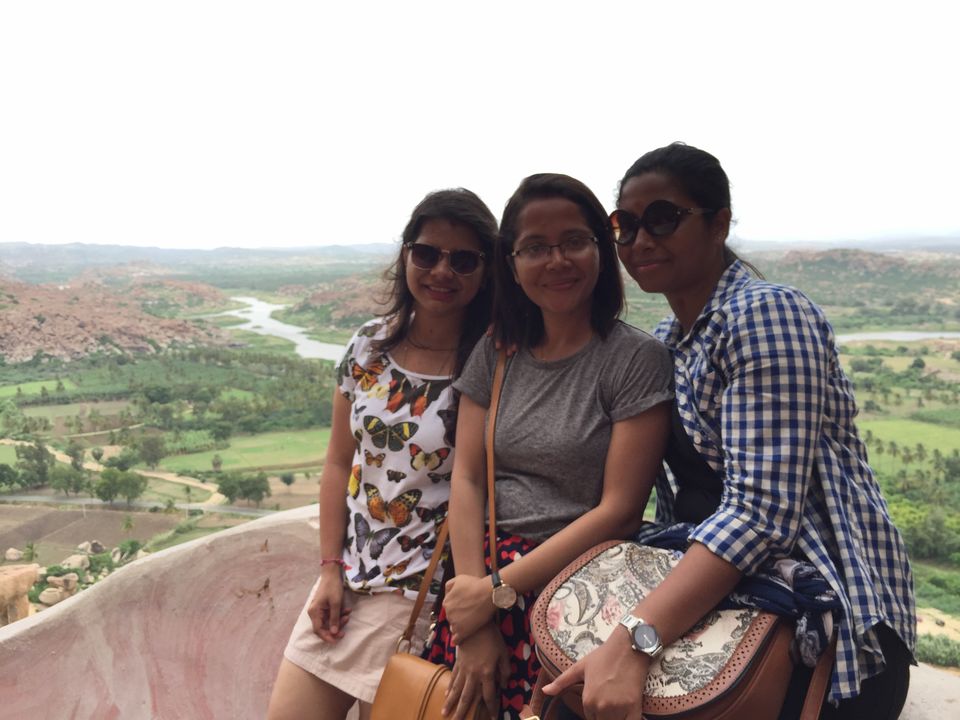 Having coconut water as we reached down again 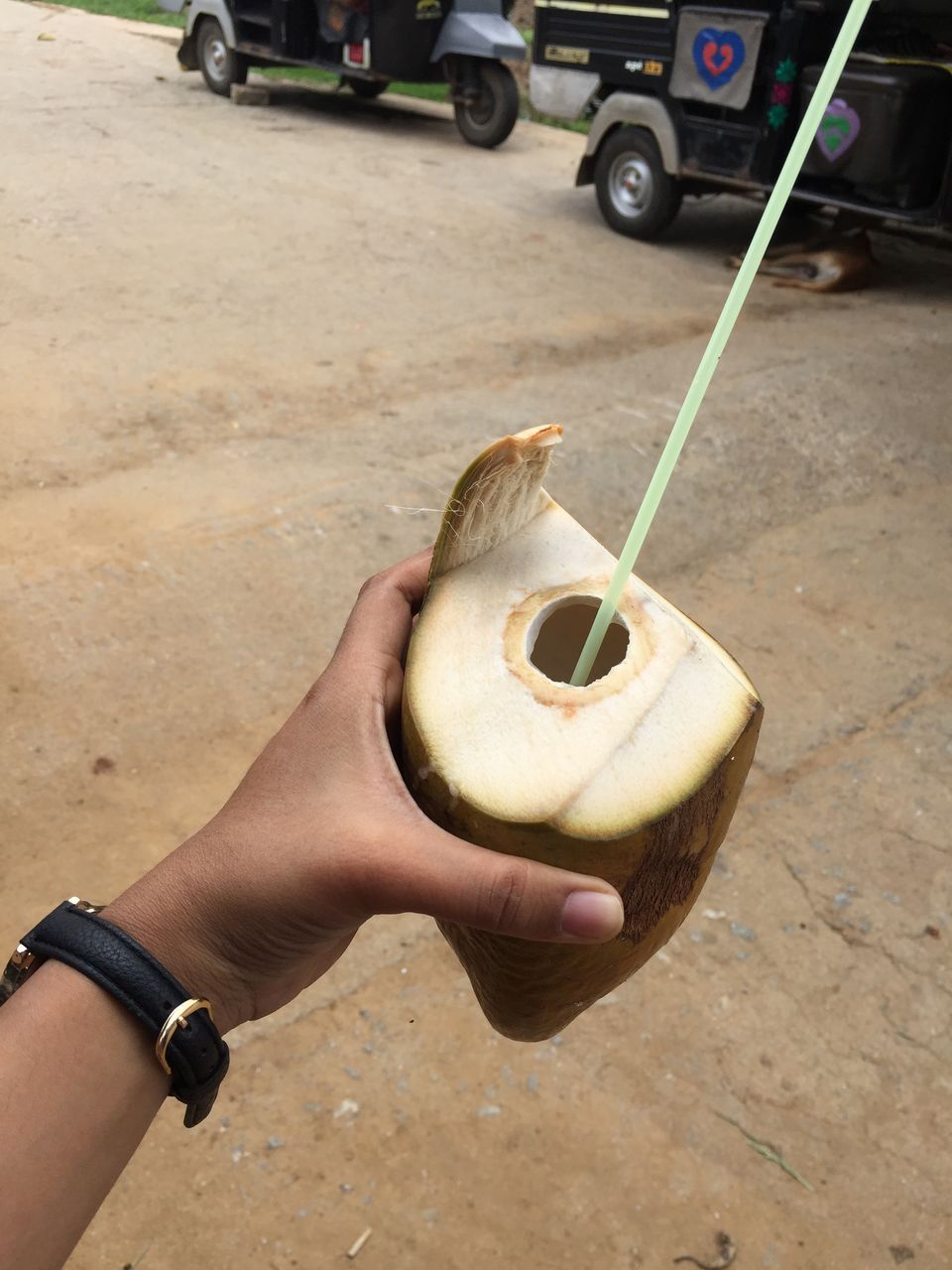 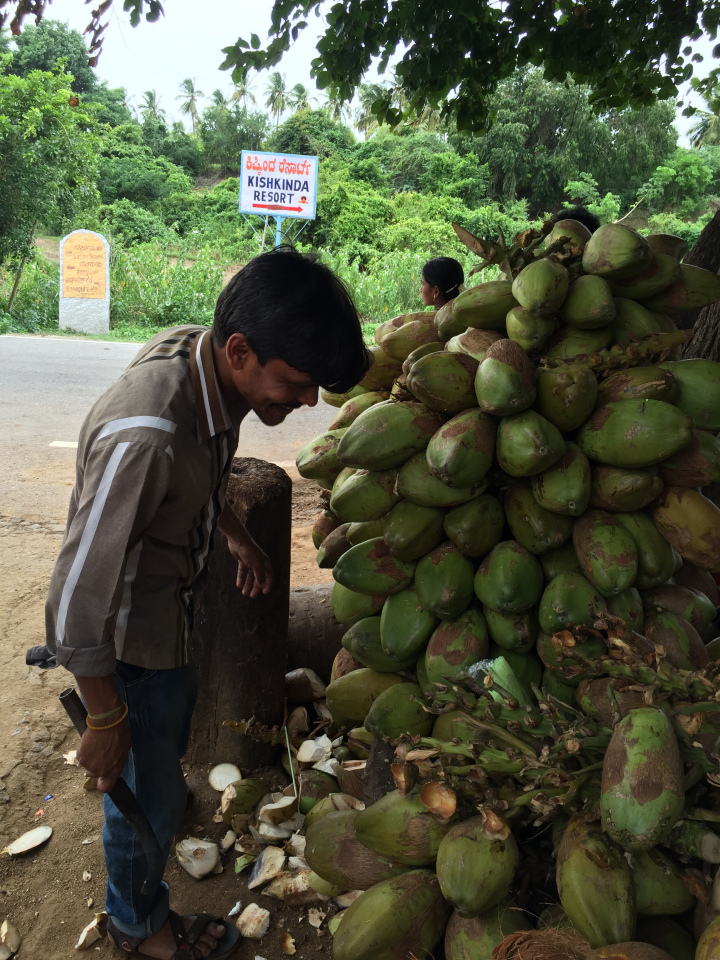 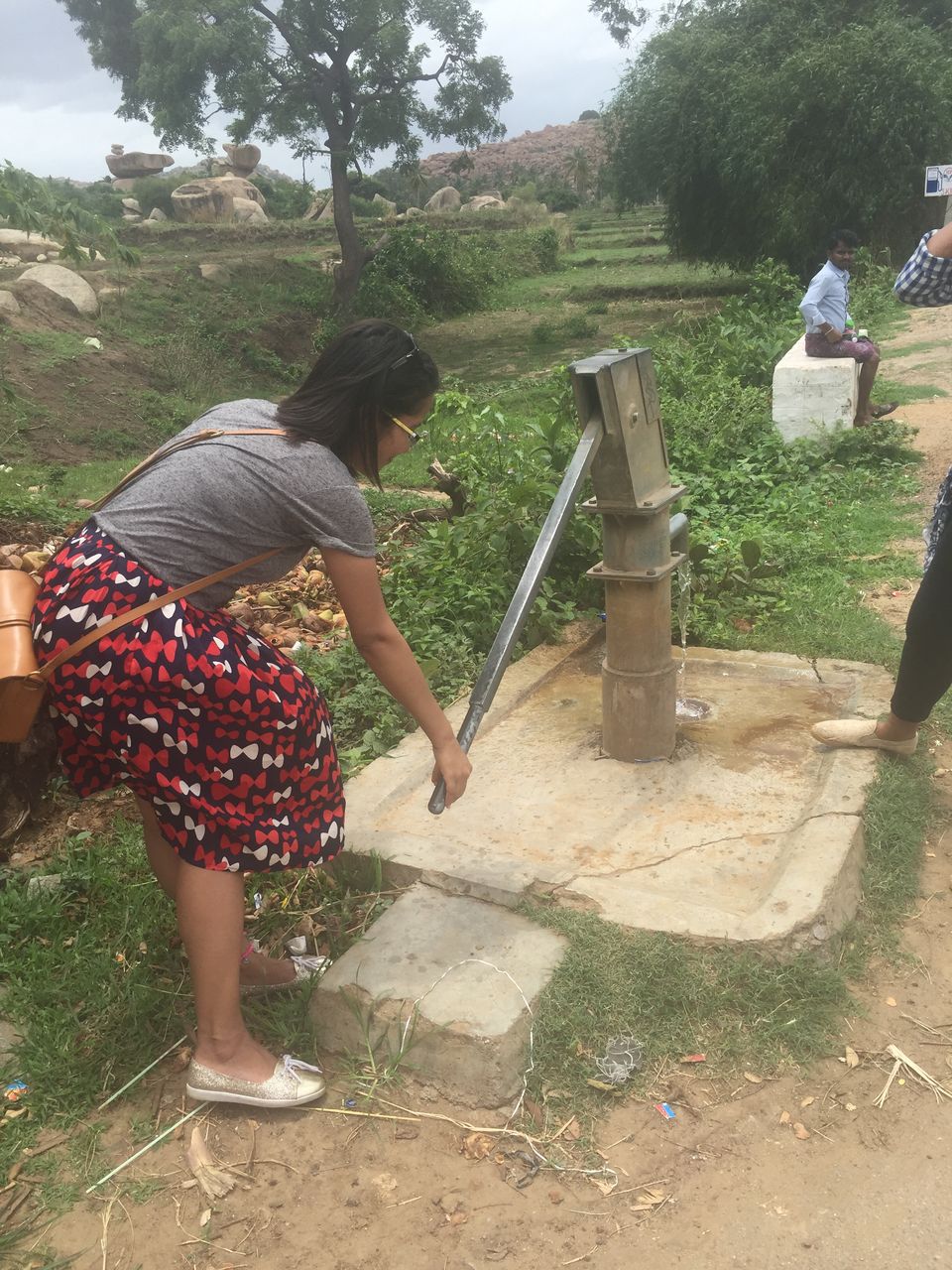 We still had plenty of time after visiting the Hanuman temple, so we wanted to roam about the countryside - and as such we reached a man-made lake.

Roaming along the countryside 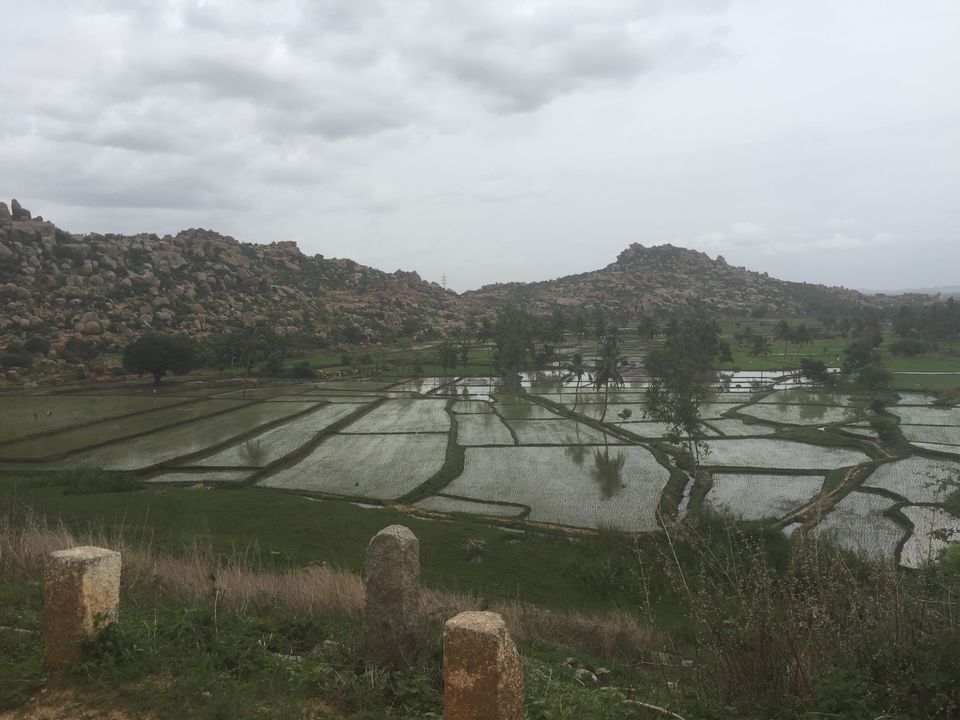 The artificial lake. I unfortunately do not remember the name of it!

An artificial lake on the route of Hanuman Temple.

At the evening we had our bus from Hospet, and so we thought to see the Tungabhadra dam as we still had ample time. 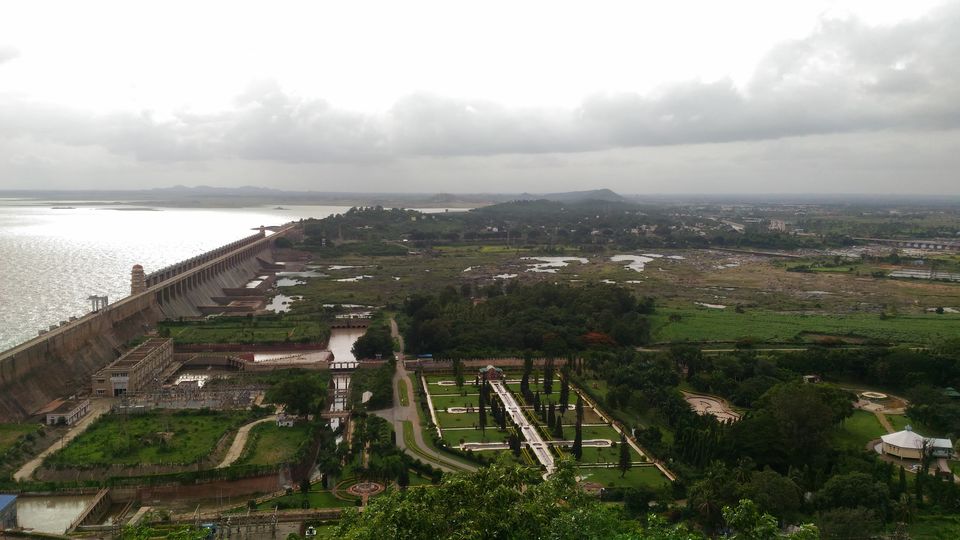 As the trip ended, I am putting some more pictures from it. Hope you enjoy it and do see Hampi!!

The countryside where we had lunch the first day 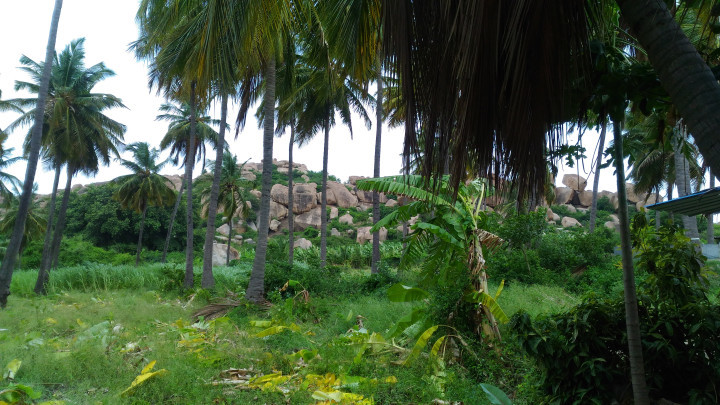 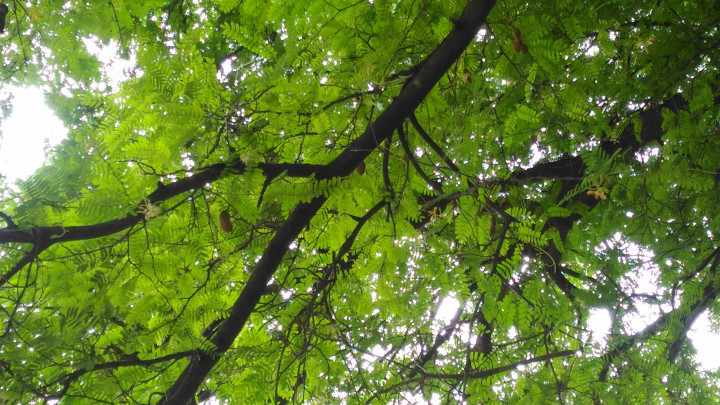 Place of lunch (Day 1, same place from the previous visit to Hampi!!) 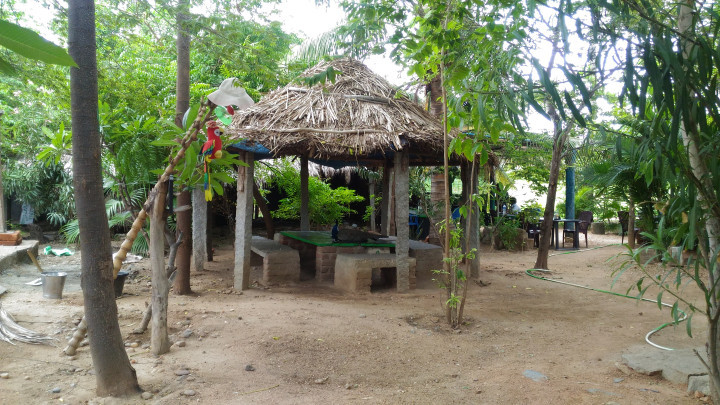 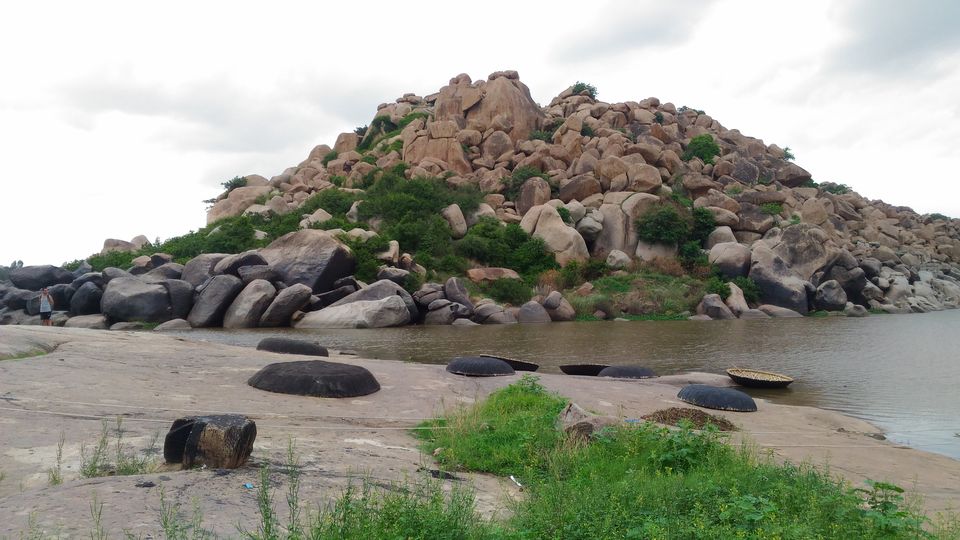 Elephant inside the Virupaksha temple at night 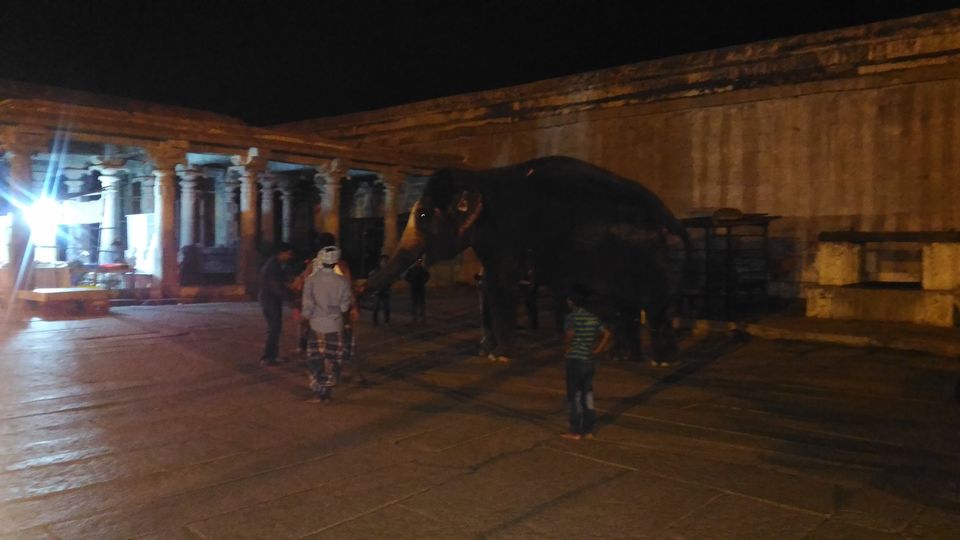 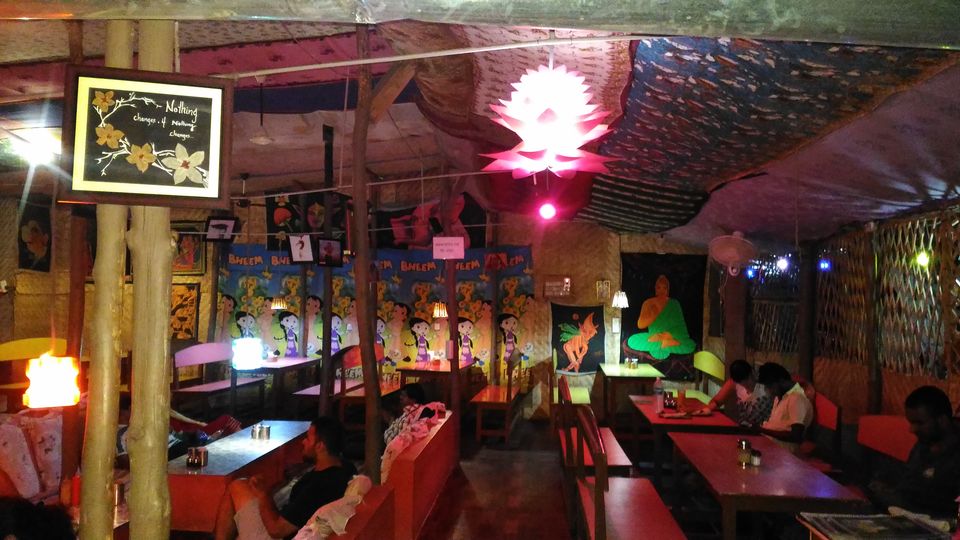 Top of the hotel where we stayed, breakfast place too!! 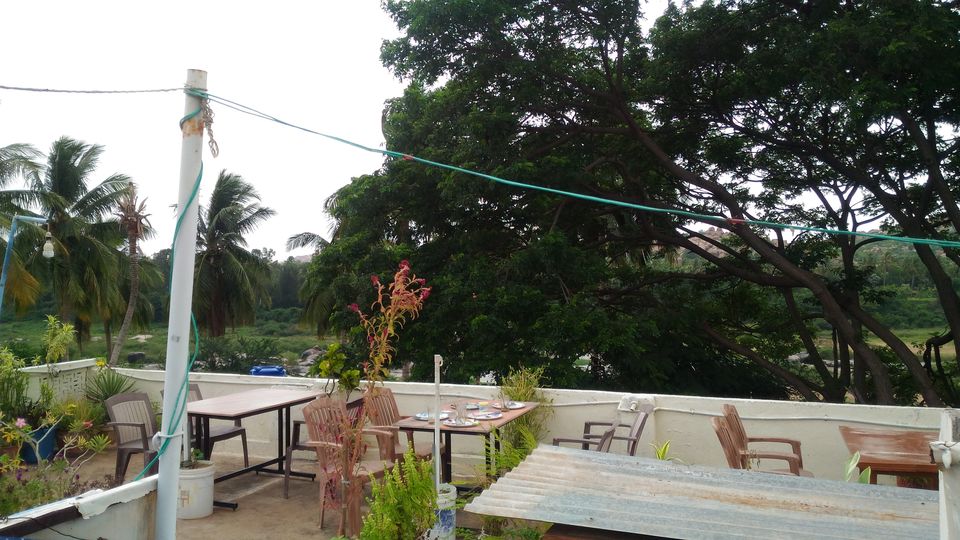 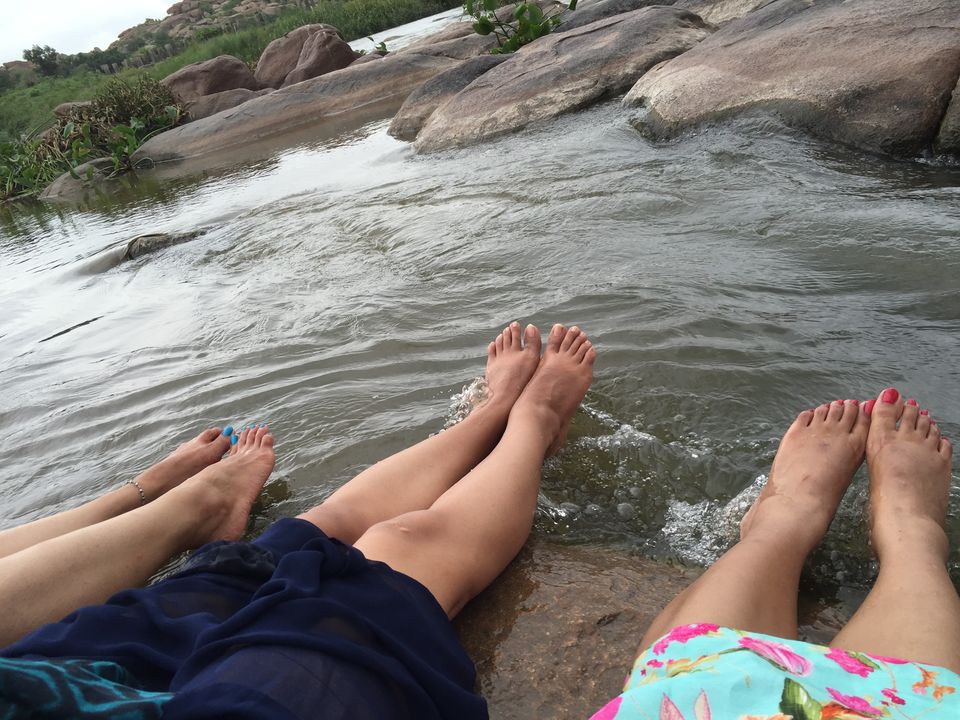 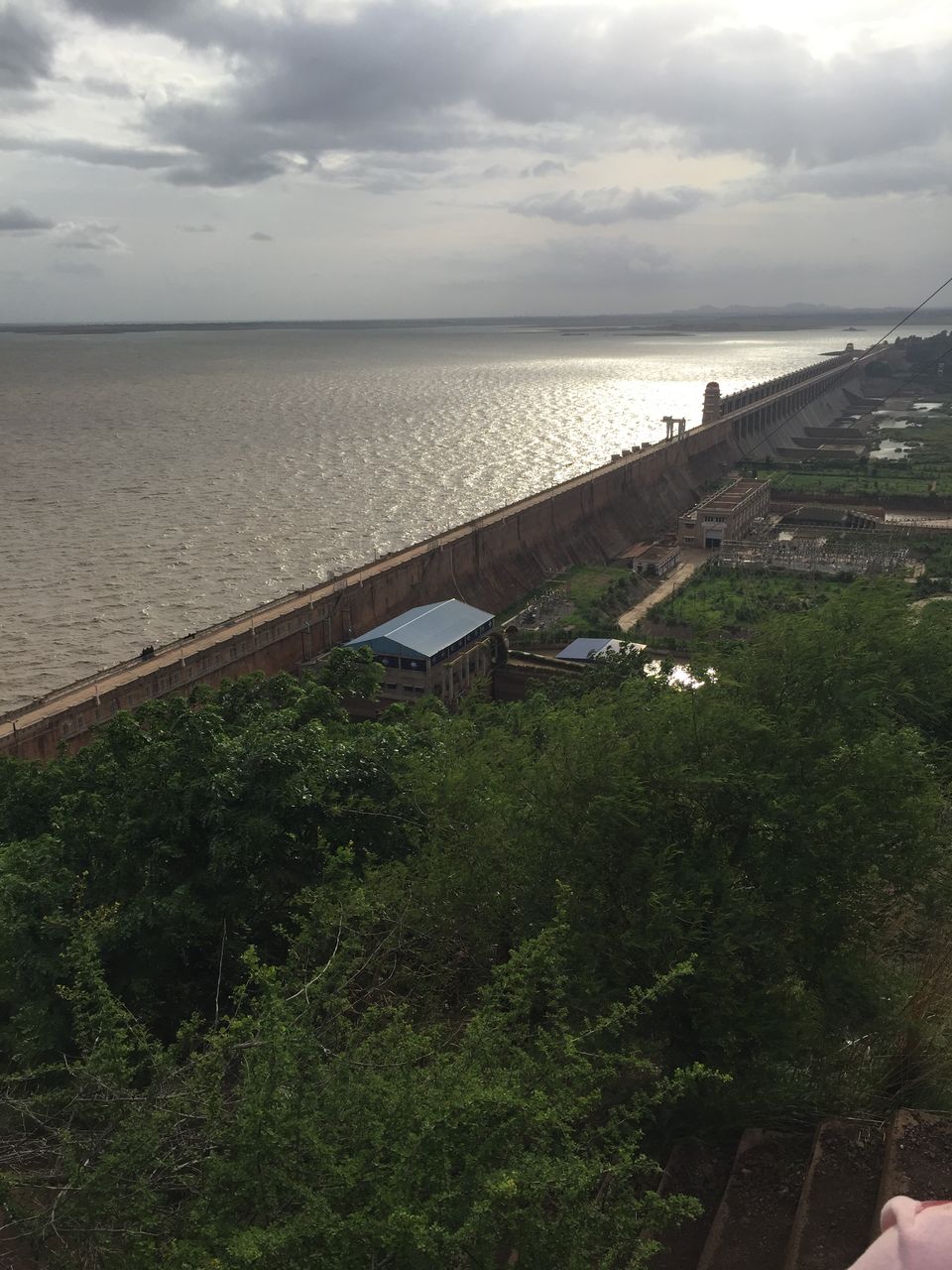