COCHIN CARNIVAL is a Must watch Event in a LifeTime!!!
Because here only you can see the Epic custom "Burning of Pappanji" !!
So Please don't miss it on next year (December last week to January 1st).

Cochin Carnival is held every year in the last two weeks of December and finally ends on 1st January at Fort Kochi in the city of Kochi, Kerala. It is officially inaugurated with hoisting the Carnival flag at the Vasco da Gama Square.

Welcome sign to the event at Harbour Bridge Kochi.
The origin is traced to Portuguese New Year celebrations during the colonial days. The main highlight of the carnival is the massive procession on the New Year's Day, led by elephants in ornamental trappings. North Indian dances are a part of the procession. It is a combination of different cultures like Portuguese, Gujarati, Punjabi, Malayalee, Kannada, Arab, Dutch, and Anglo Indian culture.
Many competitions like beach bike race, beach football, wrestling, boxing, cycle race, bullet race, kayaking, swimming and marathon races are held. Art shows, food festivals, colourful rallies and fairs add to the festive spirit of the carnival. The main principles promoted during the festival are Participation, Peace, Progress, Adventure and Environment. The city is decorated with white paper buntings, especially the Kochi Fort. The white colour is dominant in all decorations which symbolizes peace and tranquility.
Kochi Fort is the center of all the activities that take place at the time of the Cochin Carnival. It is promoted by the district tourism promotion council.
History
The history of the Cochin Carnival dates back to the colonial era. Part of Cochin was leased by Portuguese from 1503-1663. Cochin was their headquarters during the Portuguese rule in India. At that time, Portuguese ruler’s New Year celebrations were marked with grand parties and fiestas. This grand feast was started by these Portuguese in order to commence the new year celebrations. The new year celebrations continued even after the Portuguese left the country. However, eventually, the celebrations faded and stopped.
In 1984, three youngsters from Cochin decided to organise a Beach Festival with a programme at the Mahatma Gandhi beach to celebrate the signing of a UN proclamation mandating 1985 as the International Youth Year. They were supported by 150 youth groups of various clubs and organizations. This program started during the second week of December 1984 with a cycle race followed by other local ethnic games like kabaddi, tug of war, kalari, kuttiyum kolum, Kalam Vara (floor drawing) etc. The event ended on 1st January 1985 with a procession with a massive rally including caparisoned elephants accompanied by Panchavadyam, called ‘Carnivale Cochin’. Gradually, it took the form of what is today called the Cochin Carnival.
Papanhi ( Burning of Papaanji / Burning of Santa Claus)
Papanhi is a giant statue of an old man. Papanhi is burned exactly at stroke of midnight signifies the end of a passing year and welcome New Year. This symbolises the burning of all the ills and beginning on a new note. This is followed by gala party with dance and music till morning. The origin of this custom remains ambiguous.
There are many myths about the burning of Papanhi / Papaanji. Papanhi / Papaanji is a Portuguese word meaning an old man. Papaanji means old man / grandfather in Portuguese. Generally, people mistake it for Santa Claus but the papaanji is not so. It is a European concept confined only to Kochi. Most historians say that its origin lies in the area’s hybrid past -influences of Portuguese, Dutch and British on its culture. Before this became a part of the Carnival, the local clubs had Papanhi festivities all over the area. It merged with the carnival and the legend too grew. The papanhi /Papaanji resembles of Santa Claus. Over a period of time, the effigy of Santa started being burnt, however, was rectified afterwards.
Citation (https://en.wikipedia.org/wiki/Cochin_Carnival)
Watch the Full Video: 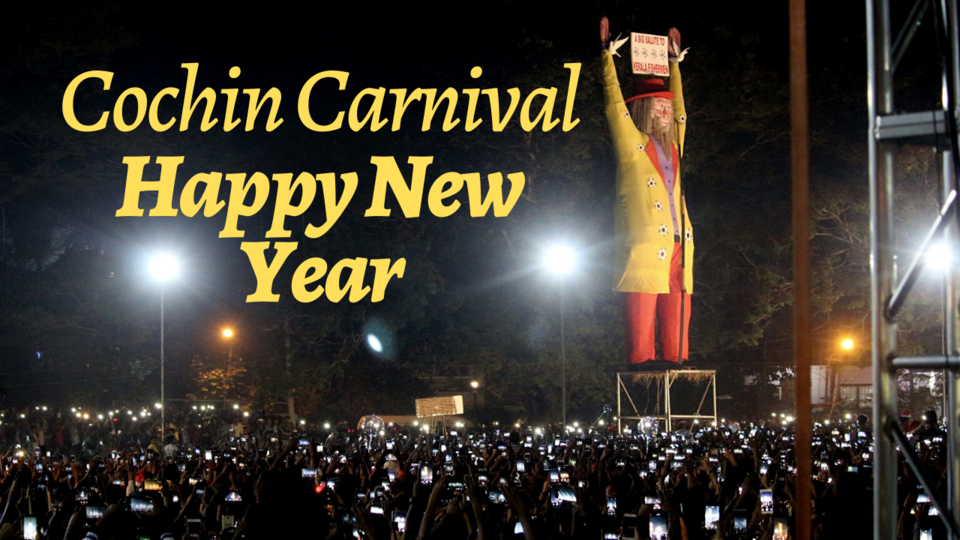