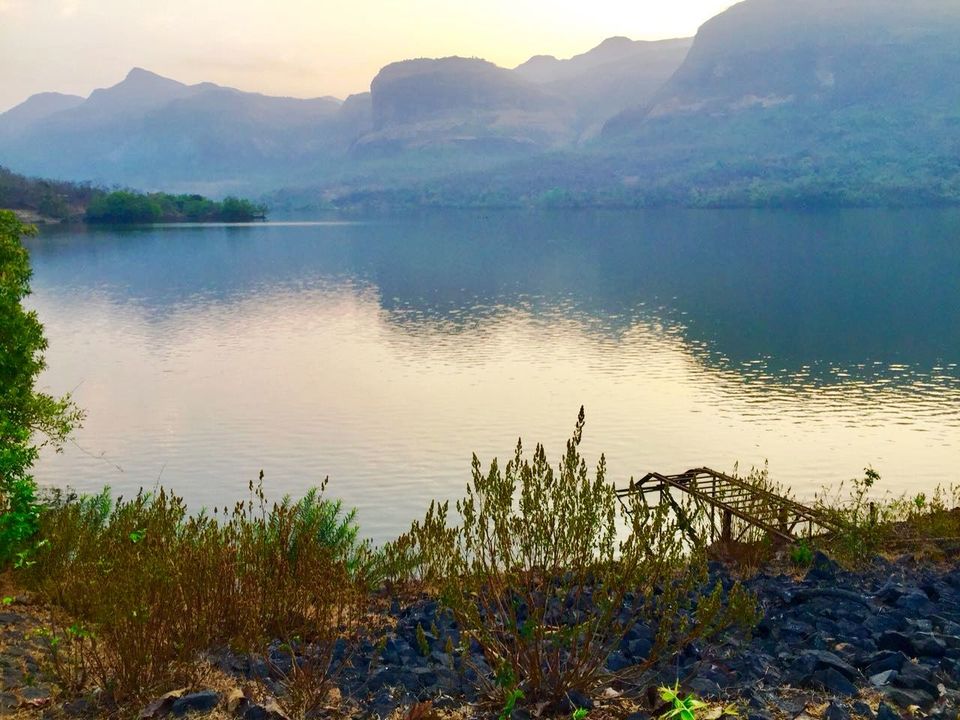 The Sahyadri Ranges surrounding the Pune city in Maharashtra is one of the top destination for all the adventure and nature loving trekkers and hikers in the state. I have done a number of day treks earlier, but wanted to take a night trek experience. I had heard a lot about the famous K2S (Katraj to Sinhagad) night trek and called up Nikhil of Outdoor Ventures (OV) - one of Pune's leading organization having expertise in Adventure activities across the nation specializing in Sahyadri, Western Ghats and Himalayas. After hearing me out he suggested the Andharban Night Trek with Easy-Medium difficulty level covering a distance of about 14 km as many of us were not active trekkers. K2S requires very high endurance levels involving a number of difficult ascends and descends. After long discussions with my friends, we agreed upon and decided to take up the Andharban moonlight challenge.

Imagine yourself in the middle of a dark jungle, finding the route, towering over valleys and crossing ghats! Andharban, also known as The Dark Forest Trek - majorly consists of descending from the peak. It is one of the most beautiful trek with lots to explore. The walk is on a ridge offering an awesome view of the Kundalika Valley, Bhira dam and the mountain ranges of Tamhini Ghat. Evergreen forest covers you with shade in the first half of the trek (6-8 kms). The trek further descends down in Konkan to reach Bhira (4 km). The same valley is the origin of the Kundalika river famous for its white water river rafting.

We started from Shivajinagar, Pune by bus at sharp 9:30 PM in the night as decided and set on to the journey towards our starting point i.e. Pimpri village in Tamhini Ghat near Mulshi via Wakad, Baner and Chandani Chowk. A group of 25 enthusiasts accompanied by 5 instructors from Outdoor Ventures - Nikhil, Aalekh, Vibha, Mahesh and Bhooshan set on course with our very own Antakshari as a soulful companion. We all sang a wide range of melodious songs across different decades with either team matching song to song and none of them emerging as winners. Before we realized how the next one and half hour passed, we were there at our base camp at 12 AM.

Everyone introduced themselves and we were handed over tasty snacks and chikki for the trek. With brief instructions we all set foot in the dense forest at 12:25 AM following Aalekh and a local villager who were our pathfinders for the night. Vibha was in the middle while Mahesh and Bhooshan formed the last boggie of the train. The forest trail was illuminated by the half moon, twinkling stars and numerous torches. Everyone was filled with excitement as we walked flanked by the valley on our left and dense forest on the right. We were warned to be careful and keep as much as possible to the right. We gradually moved on a relatively plain land venturing into the deep forests of the Andharban.

A little while later, we spotted a small scorpion in the Jungle. It was a little scary but we clicked it and moved on. The narrow path walk was plain and didn't pose any difficulties. A new adventure started when the second half of the group got separated from the leaders and took the wrong path. We walked down this path for a while but were quick to realize that something's wrong. We started calling out the other group names, searched for torch lights in the distance, but to no avail. Finally, we took an about turn and decided to walk back to the point from where we had lost the sight of lights. From there, OV team took charge and guided us back to the right track. We were relieved after 10 minutes after uniting with the remaining group.

Chikki and quick bites of paratha brought back some life in the tired souls. It was also important to keep sipping water at every stop after 15-20 min of continuous walking. We also saw one of the huge waterfalls in the Tamhini Ghat which was dry much to out disappointment due to the onset of Summer. There was a small hike which sucked out all the energy but then we descended and finally came to a halt on a plateau after covering about 7-8 km, which was half the distance. The path had many barren trees with no leaves, a few of them served as obstacles in our race. We halted around 3 AM and decided to rest for a while. A few of us had a better thought and enjoyed Star-gazing in the moonlight. Lie down on your back and savor the peaceful moment with thousands of twinkling starts above your head. It will make you forget all the exhaustion and enlighten you.

After the refreshing break, we moved on behind the villager - our Engine. :) We could hear rustling in the distant forest but did not spot any animal. If you are lucky you will see rabbits, deer, etc. accompanying you. Here starts the toughest part of the excursion - the Descent. The forest becoming more dense with every step and the path going downwards. We struggled to find strong foothold as there we slippery stones and dry leaves everywhere. It was getting tougher with every moment with Aalekh and Vibha encouraging everyone to keep moving. We crossed a tiny village that was inhabited by just 8 houses. A few of us were surprised to see a local sleeping in the open without any fear of the mighty Jungle beasts - tigers, snakes, etc.

About 4:45 AM in the wee hours of the morning when we halted for one last time. The legs had given away, neither moving forward nor backward as if they were tied together. In spite of this, the heart was saying - You cannot stop - lets go for it - one last time! We all got up and got ready to cross the ultimate frontier. The descent was getting tougher and more slippery where a few of us enjoyed a good slide after loosing grip. A group of guys were constantly chattering which kept us entertained throughout. As we continued forward, the sun was slowly making effort to peep out from the mountains. After a good 45 minute solid effort, we finally did it and emerged out of the Andharban completing a tiring yet fulfilling trail. It took us nearly 5.5 hours to accomplish this. Kudos to all of us who made this possible!!

The breeze and the sight of Bhira Dam surrounded by small hills made it a pleasant morning. There was satisfaction on everyone's face and started clicking selfies and shooting videos with the beautiful background. When you look back at the mountain covered with dense forest, you get a great sense of achievement. After spending some time on the side of the dam, we boarded the bus and started the return journey. We got refreshed and had filling Poha and Team for breakfast in a nearby village and returned back to Pune by 10:30 AM.

The entire trek was managed very well by the OV team with proper guidance and time management. Thank you team for giving us this experience that we will cherish for a long time.

Additional Details about the Trek: