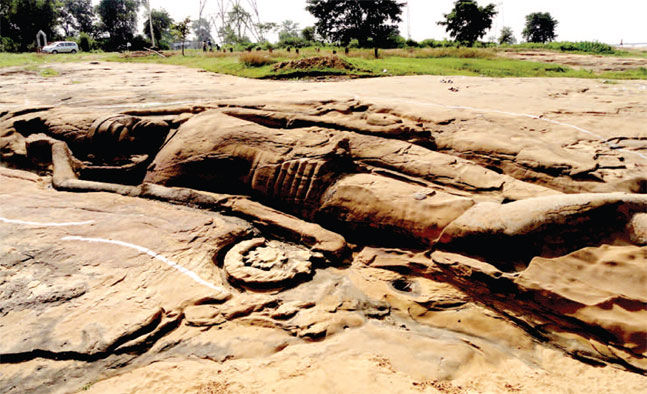 Odisha carries large number of temples in the country. You will found one of the oldest temples here. The temples of Odisha exhibit a majestic richness. Many famous temples of the country exist here such as Jagannath Temple at Puri, Sun Temple at Konark and so many. But there are so many temples which are unexplored till now. Those are not so much famous but have a great historical importance. One of them is Anantashayi Vishnu Temple.

Anantashayi Vishnu is located on the left bank of the Brahamani River at Saranga village in the district Dhenkanal. It is just 67 kilometres from the district. It will take 2 hours by road to reach Saranga village and from there it is just 1.5 kilometres. You can also go by the National Highway 42 from Cuttack.

It is also known as Anantashayana Vishnu -”sleeping on the serpent shisha”.which ,means the Lord Vishnu is sleeping for AnantaKaal. It is a large open air rock-cut Image of the Hindu God Vishnu. It had been carved during the early 9th century. It is the largest exposed rock-cut structure in horizontal position in the whole India after the largest standing image of Gomateshwara in Southern India. This open air rock-cut image had built by the Nandodhbahav feudatory rulers under the Bhaumakara kings, who were followers of Vaishnavism. It is also proclaimed that this carved sculpture was inspired with deep expression of “vigour and vitality”.

The structure of Vishnu image occupies an area measuring 15.4 metres in length and 7 metres in width with the thickness of 0.7 metres. The Vishnu image is carved out of sandstone formation. He has four arms, holding a Chakra in the upper right hand, a Shankha in his upper left hand, a Gada and a symbolic lotus on its lower left hand. The hoods of the serpent Shesha (Ananta) covering the head of Vishnu. The Vishnu image has a sharp chin, distinctive nose and wears a crown on its head, called kiritamukuta -a tall conical crown, typically worn by Vishnu. The shrine is worshiped by the local people regularly. It is protected and maintained by the Archaeological Survey of India, Bhubaneswar Circle.