"Chamunda should be with sunken eyes, three eyed, without flesh and reduced to skeleton, having hairs shooting upwards, sunken belly, wearing the skin of an elephant, holding a pattisa and a decapitated head in her two left hands and a spear and a sword in her two right hands, seated on a corpse and adorned with a garland of skulls."

"The ladies of these Places

They always come at night,

They always go at night.

It was the night of Kartika amavasya, the forest was silent as it sensed a lone female figure walking with firm determined steps. She was tall and lean,very lean, and held a rod in one hand and a kamandal in another. The kamandal was brimming with a liquid, under the dim light one couldn't tell whether it was holy water or blood. Far away, a pack of jackals howled. She was unmoved and strode on gracefully, a single piece of red cloth covered her thin frame. A clearing appeared in the middle of the forest and under the star-light one could vaguely make out the grey silhouette of a circular stone structure, it was the Chausathi Yogini Temple. A stone mandal formed by the 64 matrikas, embodying different forms of subtle sound vibrations. After years of tapasya, today the Yogini would make the 64 matrikas manifest themselves and impart her their energies, today she would attain all the siddhis.....

In Odisha Tantra vidya was known to have been popular from 6th century A.D. which marked the beginning of decline of Buddhism. However some scholars believe that Hindu and Buddhist Tantrism and the Shakti cult all have a common source in antiquity. Many Tantric texts connected with Shakti worship were composed during this period. Many Shakti temples were constructed and devis were worshiped in their myriads of forms. Side by side the cults of Matrikas and Yoginis also evolved in various parts of Odisha.

Hevajra Tantra (Tantric Buddhism/Vajrayana Buddhism) known to have been compiled in 7th century A.D. mentioned four important Tantra pithas of India namely Jalandhara, Oddiyana, Purnagri and Kamarupa. Of these four, two pithas have been assigned to Orissa. Oddiyana pitha of Orissa was the fountain head of all Trantric knowledge since early time. Pushpagiri too was a major centre. The four early pithas of Tantrism proliferated into one hundred and eight pithas later. In an inscription of 12th century A.D. of Maharashtra there is mention about Mahayogesvari Ugrachamunda as the presiding deity of the sixty four Yoga pithas (Patel).

In Odisha we find innumerable sculptural pantheons of Yogini deities. Yoginis are feminine divinities. They are also called Matrikas. They also personify different forms of subtle energies. Master female practitioner of Yoga, more often Tantric Yoga is also called a Yogini. Their number of divine Yoginis was initially seven or eight but subsequently their number increased to sixty four and got mingled with Tantric cult and rituals. The Markandeya Purana refers to seven Matrikas.

The word Matrika is derived from the Sanskrit word, Mantra or formula which are the basis of all forms of creation. In Yoga, mantra corresponds to the sound formula that which is a verbal expression of an archetype that represents a state of being i.e.a divinity and allows that divine being to be summoned.

According to Hevajra Tantra the thirty-two veins of the Hevajra's body are equated with the Yoginis, two for each vein adds up to sixty-four. (Douglas). According to another interpretation (Singh), the symbolic 64 is a product of 8 directions and the replication of each one in ashtha-mandala, 8 points of the cosmic circle. The number 8 (matrikas/mother goddesses) symbolise the condensation (sankoch) of cosmic rhythm which on expansion (purna vikas) gives rise to 64 matrikamandal.

Among all symbols, the circle is the purest and the simplest, both in form and concept. It may represent the Sun, the Eye, Zodiac and many other things on heaven and Earth, but ultimately it represents the cyclic eternity and the One source of it all.

Since ancient times, a circle has been used to mark the boundaries of a sacred space. The Agni Purana lists nine types of circular temples.

The circle also represents a chakra used for specialized tantrik rituals. In the Yogini Tantra, images of various yoginis are placed within a circle to form a Yogini chakra or a Yogini Temple. 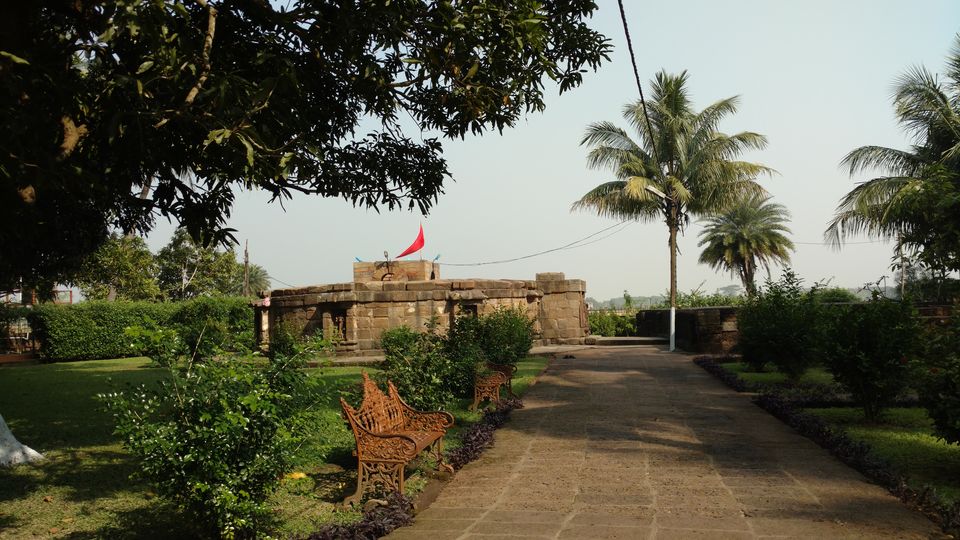 The Chausath or 64 Yogini temple that we visited is situated in the village of Hirapur, 20 km outside Bhubaneswar. As soon as we arrived a small built middle aged man and two Pandits appeared from no where, all eager to tell us about the temple. The man, who appeared to be an ASI certified guide, began reciting the history of the temple, the name and the vahan (vehicle) of each of the Yoginis. He had memorized the entire list of 64 yoginis but was unable to answer much beyond that. The Pandits, as usual were eager for dakshina and found a very hesitant devotee in me. However they managed to recite a mantra and hastily put a vermillion tilak on my forehead before I could change my mind.

The guide at the Chausath Yogini temple at Hirapur, Odisha 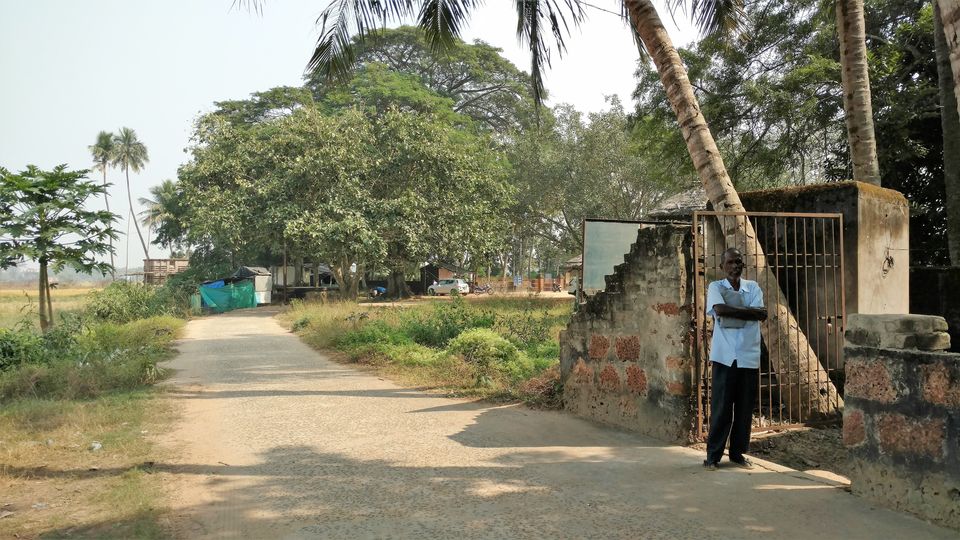 This was one of those rare temples whose basic architecture was more akin to the Stone Henge structure in U.K. than a Hindu temple in the sense that it was simple, circular and was open to the sky. But that was where the resemblance ended. This Yogini temple, made of a low circular wall without a roof and a square shaped main shrine (Chandi Madap) at the center, had beautiful and exquisitely carved female deities housed in each of the 60 niches on the inner wall of the circular structure. 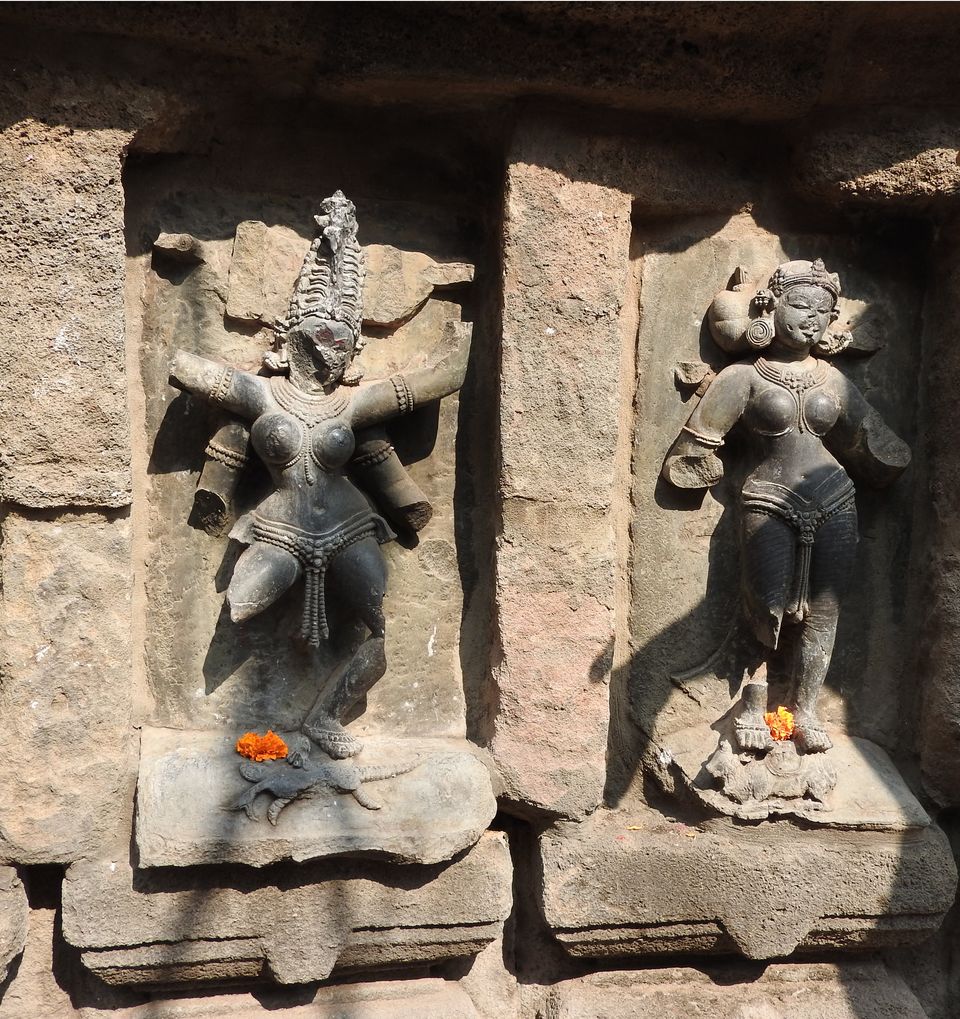 There were two Dvarpalas on both sides of the entrance and nine Katyayanis in the niches of the outer wall. The Dvarpalas and Katyayanis embody wrath and anger and are possibly the guardians of this unique temple:

The Katyayanis (above and below), Chausath Yogini Temple, Hirapur, Odisha 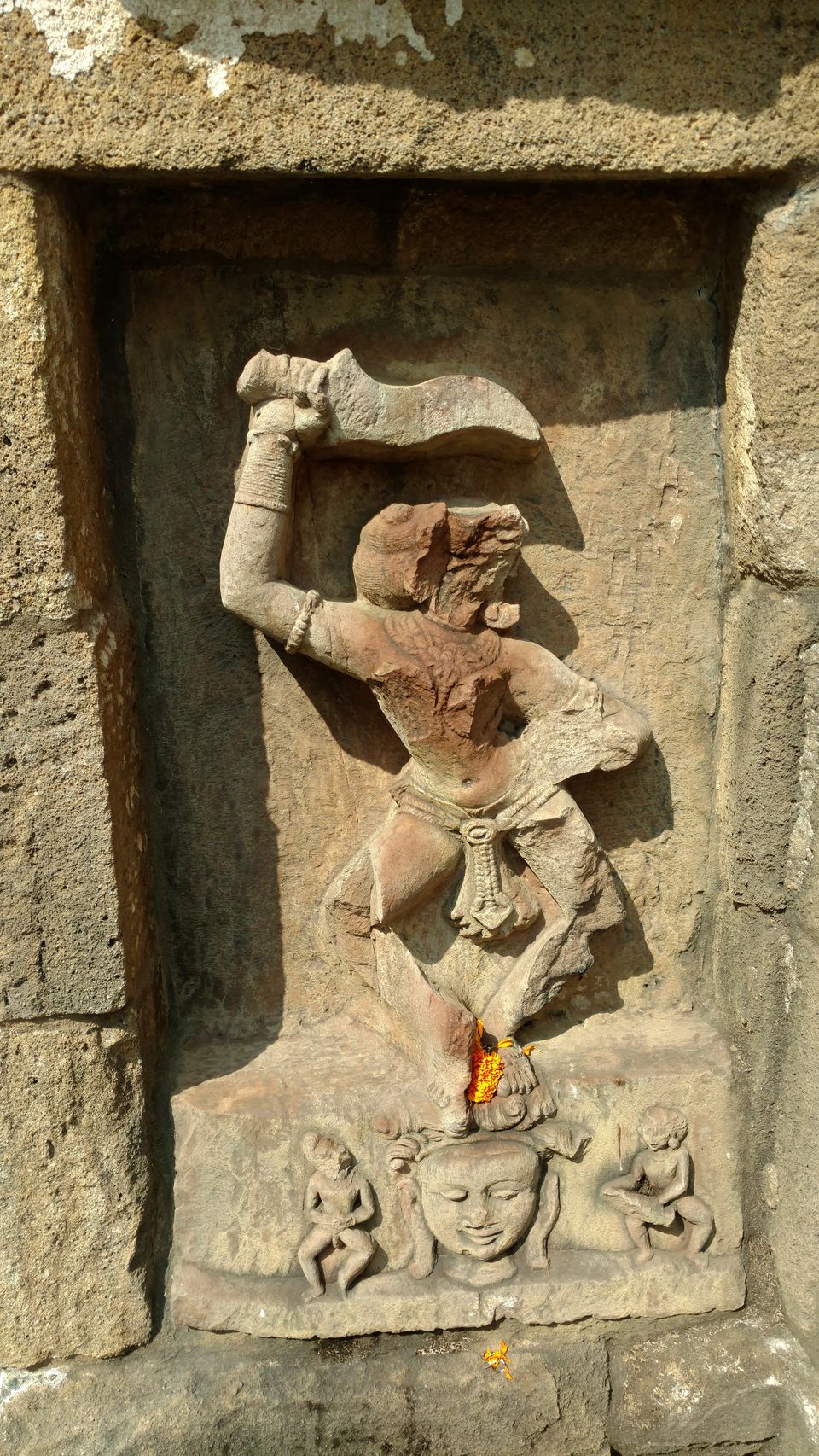 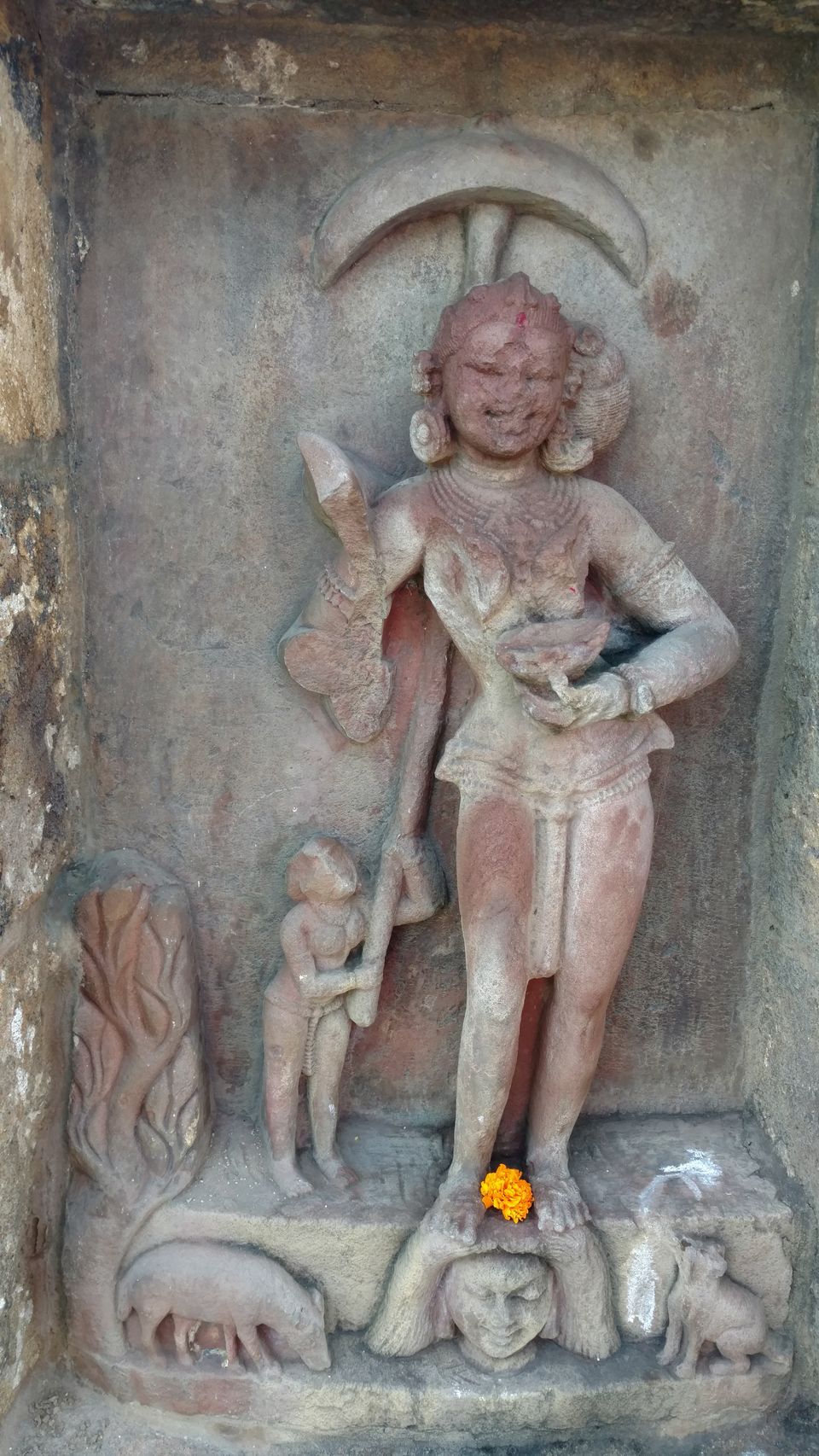 The square structure or Chandi Mandap at the center is believed to house the image of dancing Nataraj or Moha Bhairav which had been removed.

On both sides of the Pillars there were a total of eight niches housing four Bhairavs and four Yoginis. Yoginin no. 61 had been removed.

The Bhairavas (above and below), Chausath Yogini Temple, Hirapur, Odisha 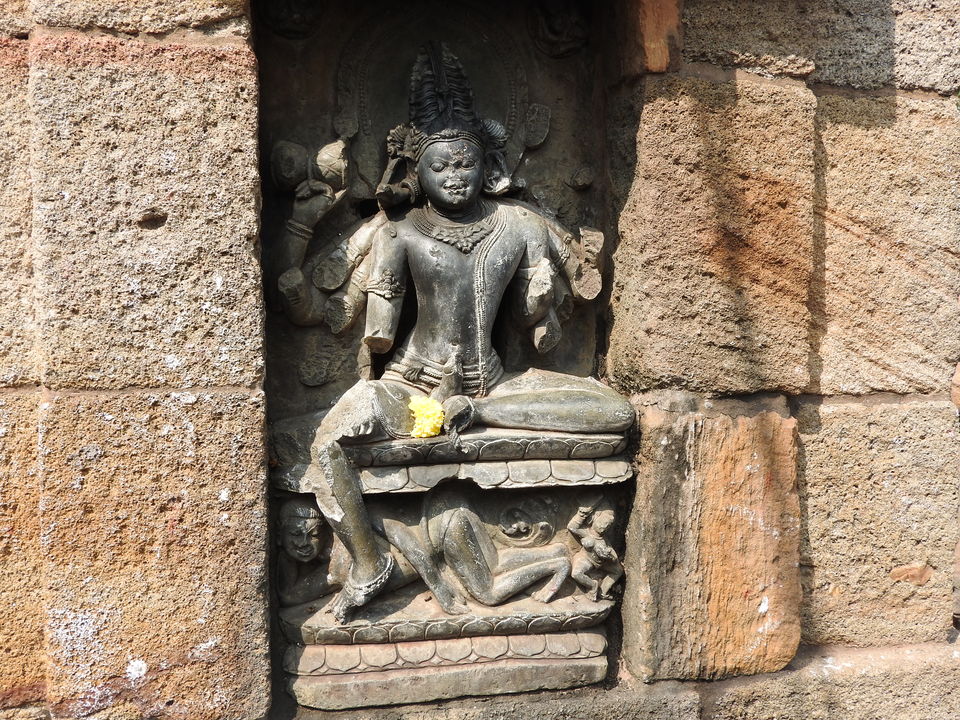 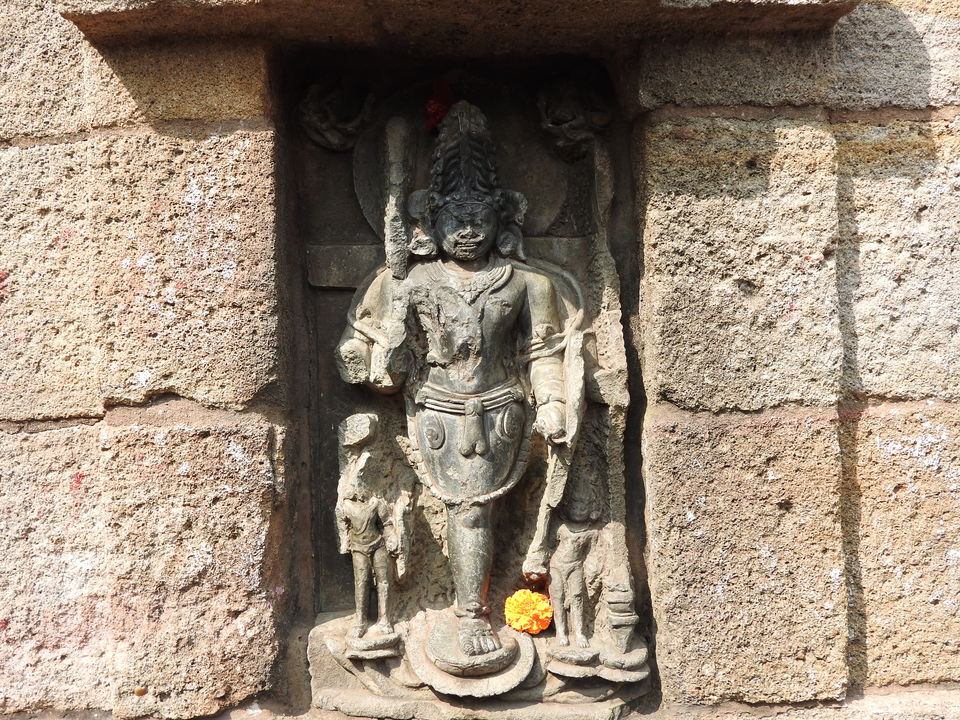 There was a small shop near the temple which sold handicrafts 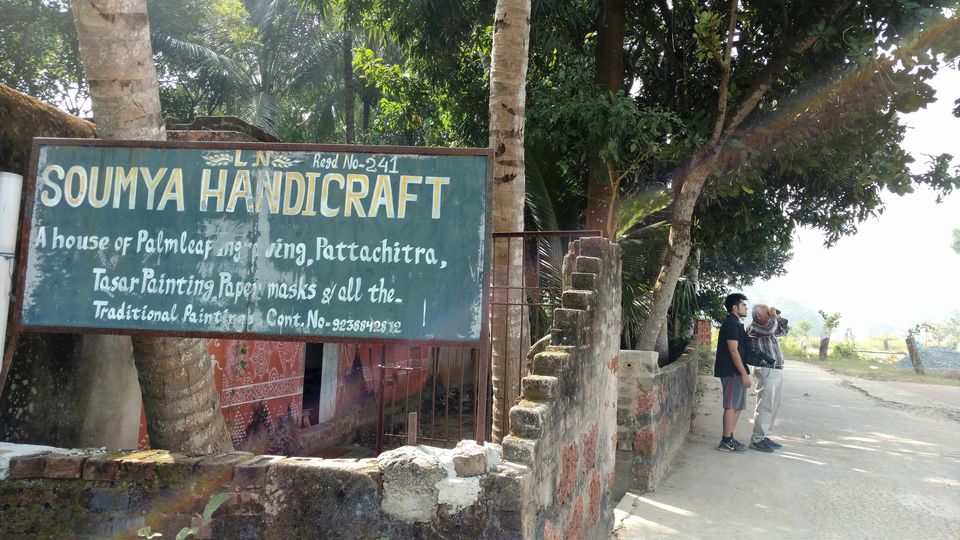 While the two Pandits rattled off mechanically about how this temple was that of Kali and only fish was offered as sacrificial bhog, to me this temple was a tribute to feminine energy in all its beauty, power and wrath.

A partially submerged nondescript temple near the Chausath Yogini temple at Hirapur, Odisha 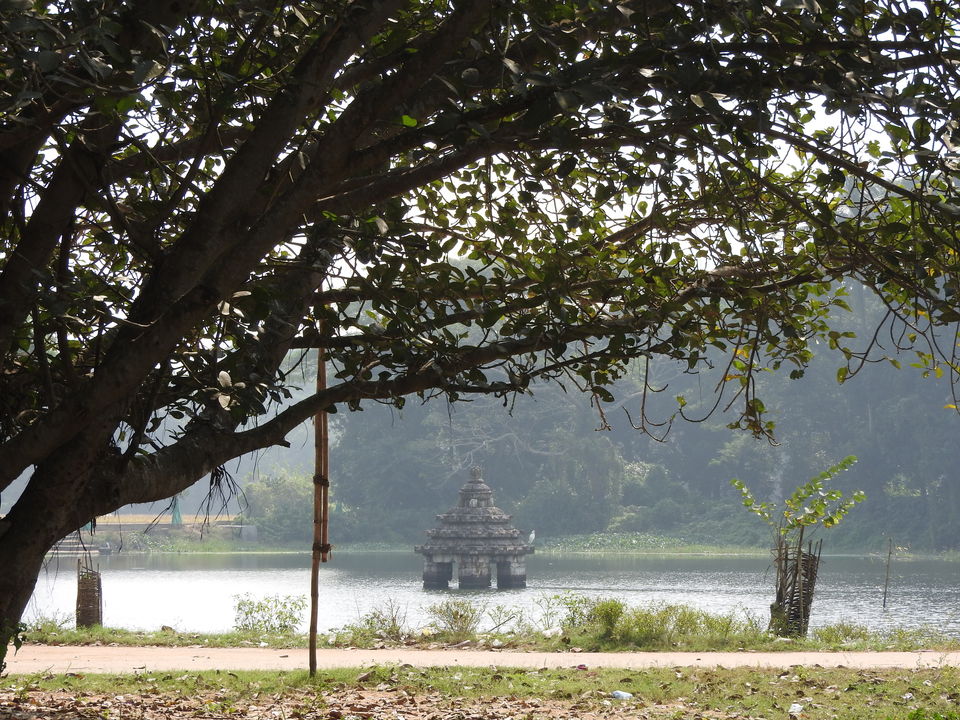 Shakti worship/Shaktism - (Sanskrit: Śāktaḥ, meaning "doctrine of energy, power, the Goddess") is a major tradition of Hinduism, wherein the metaphysical reality is considered feminine and the Devi (goddess) is supreme. It includes a variety of goddesses, all considered aspects of the same supreme goddess.

Tantra - The word 'Tantra' implies a process of weaving and expansion. The inner and outer-world, the microcosm and the macrocosm are like the two sides of a fabric which is composed of all the energy and matter of the Universe. Tantra is continuity, Yoga is union. The union of inner and outer brought about through Tantric practice is the ultimate goal of Tantric Yoga.

Pitha - The early Tantric writings refer to four holy centers as being the original seats of Tantra. These were referred to as Pithas.

Matrika - According to Hindu scriptures on Yoga, the whole Universe is made of fifty distinct 'Mother' vibrations called Matrikas. These Matrikas were revealed to Rishis and Yogis of the remote past through Yoga. Every Matrika has a Shakti/energy.

Yogini- refers to a master female practitioner of Yoga, more often Tantric Yoga. It also refers to the manifestation of different forms of energies or Matrikas.

Kamandal (Sanskrit: कमण्डलु, kamaṇḍalu) or kamandalam is an oblong water pot made of a dry gourd (pumpkin) or coconut shell, metal, wood of the Kamandalataru tree, or from clay, usually with a handle and sometimes with a spout. Hindu ascetics or yogis often use it for storing drinking water.

Katyayani is the sixth form among Navadurga or the nine forms of Hindu goddess Parvati (Shakti), worshiped during the Navratri celebrations