Orissa Travel GuideOrissa TripsOdisha- Vi: Chilika Lake And The Conference Of The Birds

ODISHA- VI: Chilika Lake and The Conference of the Birds 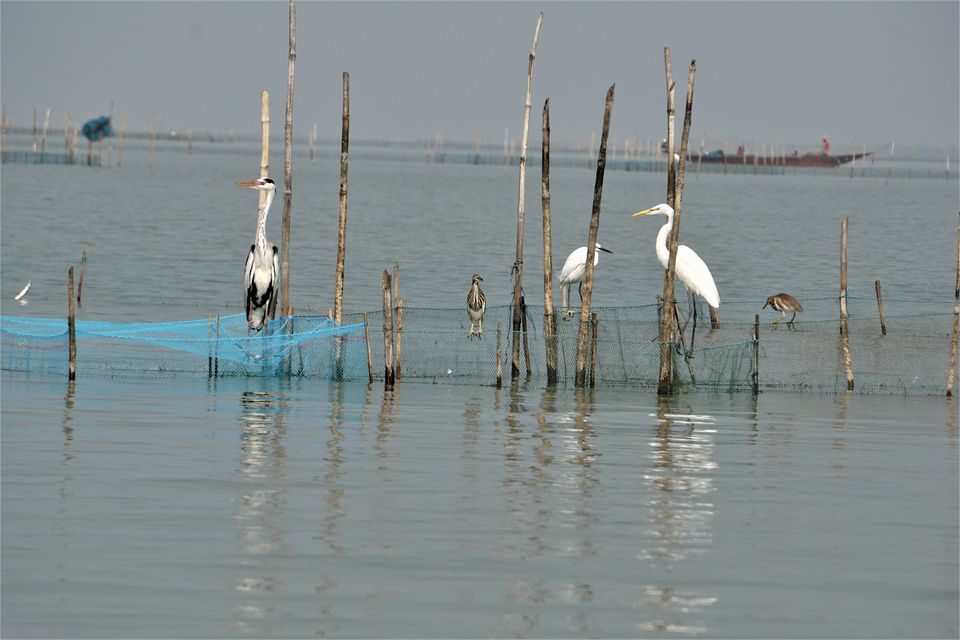 Our visit to Chilika lake in the month of December was on a chilly over cast day. Damp and dreary, like a lost soul in search of a forgotten Path. We had to wait patiently with cameras and binoculars, as our boat chugged on in grey waters, in search of Chilika's feathered denizens.

We did see them eventually, in groups small and big, going about their daily business of feeding and foraging or just basking in the elusive sunlight. Ignoring the intruding humans, whom they seem to have come to accept as a part of their unstable and shrinking habitat.

Perhaps a place similar to this might have inspired the Persian Sufi, Farid ud-Din Attar to write his magnum opus -Manṭiq-uṭ-Ṭayr, The Conference of the Birds. This is a poem about Sufism, the mystical aspect of Islam. According to this school of thought, God alone exists, the rest is God's emanations or shadows. Religion is useful primarily as means of reaching to the Truth. Human conception of good and evil are irrelevant and only Unity exists in the eyes of God.

The soul is trapped in the human body and can free itself by looking inwards and realize its affinity with God; the awakened soul, guided by divine Grace can find its way along the Path which ultimately leads to the annihilation of the 'Self' or Ego/nafs and union with God.

“So long as we do not die to ourselves,

and so long as we identify with someone or something,

we shall never be free.

- The Hoopoe, in Farid ud-din Attar's Conference of the Birds.

Long time ago, in the dim old days, all the birds of the world came together to consider a momentous question. This was the time when every city has a leader or king called the Shaharyar, the friend of the city, but these feathered souls had no King . How could they fare through the perils of existence without a King to inspire them and guide them?

They are then told by the Hoopoe, the knower of a many spiritual secrets (and here she is a symbol for the Sufi Sheikh or spiritual teacher) that they have a king -- the Simorgh (a legendary Persian bird)-- but that he lives far away and one needs to undertake a hazardous journey to meet Him.

'The Conference of the Birds' is an epic allegory of a seeker’s journey to God. Birds from many species gather to go in search of their ultimate great and mighty King – the Simurgh. The legendary Hoopoe, with her crown of faith and knowledge acts as their leader advising them through the long and arduous journey through the seven valleys of search, love, understanding, independence and detachment, unity, astonishment and bewilderment, and fulfillment in annihilation.

Along the way most of birds give up the quest, either due to their attachment such as the nightingale to the rose, and the duck to water, or through their sense of false humility of being too worthless to entertain such noble aspirations.

Some are just too weak to last the distance. As the birds face their own demons, the Hoopoe counsels them with advice in the form of legendary tales teaching them lessons of the spiritual way on purity, austerity, humility, aspiration, loyalty, justice, etc, which are essential for the quest.Open Billed Stork

Only those birds who are deeply passionate in their search, overcoming fear of failure and death, facing the unknown with courage, forsaking their inner and outer desires, letting go of pride, vanity and ego and who are happy to give up their sense of self in uniting with the Simurgh, are able to eventually see the Light , learning its secrets and gaining immortality.

This beautiful poem is not only a commentary on Sufism. The birds are allegories for the different human personalities, conditions, desires and despairs. Their reasons and excuses, rewards and failures depict human nature in face of extreme fear and hardship in treading the unknown in search for the meaning of their life and oneness with God.

1.Valley of the Quest

Here the Wayfarer begins by giving up all pre-conceptions, dogmas and beliefs. This is the Valley of Yearning where you are filled with such longing that you give up yourself completely to the quest of God. Hundreds of difficulties will assail you; but you will be get help from the Invisible Realm.

This is the Valley that belongs to the the faculty of devotion. Here, love is represented by fire and reason by smoke. When love comes reason disappears. If you possess inner sight, the atoms of the visible world would be manifested to you.

Here you turn your back to worldly knowledge because it is of no use on the spiritual path. This is the Valley of Spiritual understanding which has neither beginning nor end. Some find it in Mihrab, others in idol. When the sun of understanding brightens the road each receives light according to their merit. With inward and outward eyes you witness the mysteries of rebirth in the realms of creation and the souls of humans and with a pure heart apprehend the divine wisdom in the endless Manifestations of God.

4.Valley of Detachment and Independence:

Here the seeker realizes that attachment to transient objects of the world bring nothing but grief.

In this stage both worldly joy and grief becomes same for the seeker. The seeker becomes independent from all things, and even though she may look poor or are subjected to suffering, she will be endowed with wealth and power from the spiritual worlds and will inwardly be happy.

Here the whole world becomes a kind of stage to you, full of players. The Beloved is seen in all things, and then the bowl of poison given by the Beloved is not so bitter. You see this world of good and bad, of thorns and flowers, unaffected as a witness. You realize that God is beyond unity, multiplicity, and eternity, there is only One- the Beloved.

6. Valley of Amazement and Bewilderment

Here, enchanted by the beauty of the Beloved, the Seeker becomes overwhelmed. She becomes conscious of the vastness and glory of creation, and discovers the inner mysteries of God's revelation.

7. Valley of Poverty and Annihilation

Here the individual self disappears into the universe and the Seeker becomes timeless, existing in both the past and the future. This is the Valley of Self- Annihilation and God-Realization, the valley of absolute nothingness and it is the furthermost state that the mystic can reach. This station is the dying from self and the living in God, being poor in self and rich in the Desired One.

At the end of their journey the birds arrive at the court of the Simorgh. Here they find that the Simorgh they have sought is none other than themselves. The moment depends on a pun -- only thirty (si in Persian) birds (morgh in Persian) are left at the end of the Way, and the si morgh are face to face with the Simorgh, the goal of their quest.

The final revelation at the end of all spiritual journeys is, that which you seek lies within you....

By boasts of who you are and what you’ve done --

Don’t brag of love; He’s not deceived by lies,

And no one pulls the wool across his eyes.

Lifting the veil from hidden mysteries --

Then He will draw you to Himself, alone;

Your place will be with Him, beside His throne

(Though if mere pride of place prompts your desire,

Your love prepares you for eternal fire).”

- The Hoopoe, in Farid ud-din Attar's Conference of the Birds. (Translated by Afham Darbandi and Dick Davis)

The large Nalabana Island (Forest of Reeds) covering about 16 sq km in the lagoon area was declared a bird sanctuary in 1987. The core area of about 9 sq km attracts around 400,000 waterfowls of different species. Often underwater, the island gradually emerges with the outset of summer. It is literally a paradise for bird-watchers.

Another major attraction at Chilika is Irrawady dolphins which are often spotted off Satpada Island. Satpada, bounded by the lagoon on three sides, offers an excellent view and attracts the visitors to its entire 30 km stretch of sand bar.

If you are a keen bird watcher, two days stay is a must. In this case, book a place in Chilika itself. Also make sure to visit Mangalajodi, a village located on the northern banks of Chilika Lake. This bird paradise hosts more than 3,00,000 birds in its marshy waters, especially in winters.

For the casual tourist a day trip from Puri, which is only 37 km away would suffice.Leave from Puri early in the morning if you want to catch the birds.

Boats arranged by OTDC are available for Nalabana and Satpada the islands.

Choose a sunny weather when long distance visibility is maximum.

We were lucky and sighted a number of dolphins. However for the bird sightings, talk to the boatman in advance and he might take to you the best spots for bird sighting.