The Last Pivo in Prague #BeyondTheBorder

This is my personally favorite view and memory of Prague 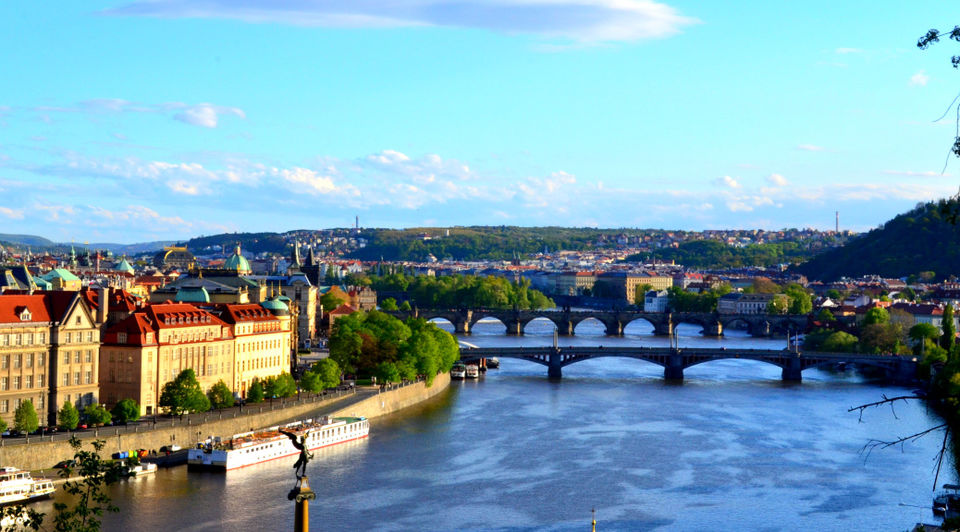 That evening in Letna Park

Suddenly, just to get the feel of drinking with a view, Vikrant said “Let’s have a beer”. That was an interesting proposition, as it is said in Hindi “मौका है दस्तूर भी”, so we both dug into our pockets and wallets and found some euros and 40 Czech crowns. Now one pint of the pilsner was for 33 crowns, and all we had was 40. As much as we tried convincing him to accept Euros, the beer shack guy was adamant on accepting only local currency.

So, armed with that single pint between the two of us, and a couple of hours to go before the sun went down over the Vltava, we resumed our vantage position. The wind was strong, and quite cold for an April end evening, and we were constantly trying to keep ourselves warm in our windcheaters – though not too successfully. In all this, that single pint shared between two friends kept us company. Tourists and locals returning from work gathered on the ramparts of the park that gave a complete view of Prague and its bridges and the river flowing through it all, as if putting the story together.

We just sat there marveling at the city and its sights as the lights came on, looking back at the last 2 days spent marveling at the wonders of medieval Prague and its streets, devouring some delectable local food and drink, and working out our legs. With a cacophony of multilingual and multiethnic conversations around us, it felt, as many travelers would feel, a place of belonging despite being nearly 4000 miles away from home.

As the sun went down, and with no more money to buy one more beer at the park, we crossed over the Vltava and walked towards the Old Town Square and then on to the 4-bed dorm room in the backpacker’s hostel, `that overlooked a pizzeria and a next door restaurant from where the aroma of a spit roast wafted in from evening to night. This has been our digs for the last 3 nights.

Allow me to retrace this 3-day Insta worthy story from the beginning.

We had checked into the Prague Square Hostel, 2 days back, after hauling our luggage on a 20-minute walk from the Prague Railway Station (hlavni nadrazi), through Wencelas Avenue. The choice of the accomodation was result of multiple considerations – cheap and clean staying options (ours was a Rs. 1700 per night – 4 bed dorm), close to Old Town Square and Charles Bridge, close to a metro station incase necessary, and close to the party district, should we decide to head that way!

It was already 2pm when the Railjet from Vienna reached Prague, after the most astonishing train journey I have ever been on. A quick bite and settling down had ticked off a couple of hours on the clock, hence did not spend a lot of time on the exploration on day 1, instead just decided to generally to walk around and feel the vibe of the city, grab some street food and some of the famous Czech beer, and take a stroll by the Vltava. Now a 4-bed dorm ain’t the best place to spend a lovely spring evening when in Prague, however tired we may be. The next couple of hours were hitting up some of the night clubs on Wencelas Street, before calling it a night.

The second day was to know Prague upclose and personal. Let’s begin the closest attraction to our stay, the Old Town Square. The heart of Prague’s historical past, this square feature the Gothic Tyn Church, the Baroque St. Nicholas Church, the Astronomical Clock, the Jan Hus memorial and other Gothic and Baroque buildings. Winding cobblestone alleyways hiding many cafes, restaurants and quaint stores lead into the square where street musicians and artists regale the crowds with their acts. You need atleast half a day to explore the square and its offering to your hearts content.

By now we are already famished, and the flavor of the smoked bacon from the roadside cafes, and the freshly baked trdelnik (locals don’t consider it a traditional Czech specialty) from the tons of pastry shops lining the alleys, is making it difficult to curb the hunger pang. So, we decide to do something touristy, stop by at one of shops selling it, buy an expensive trdelnik (about 75 – 100 CZK) and a mulled wine to go with it. That done, we walk on to the next touristy attraction.

Karlov Most, more commonly the famous Charles Bridge traversing the Vltava river. If you want to spend some good time at the bridge, reach there either really early morning or late night. All other times of the day its teeming with tourists and artists / performers who set up their little ‘studios on the bridge’. While I’m personally averse to crowds, but still standing by to listen to a band perform popular retro numbers, to watch the watercolor artist create magic with his brush, to listen up to the old man playing the accordion with the river breeze howling in the background, are experiences that’ll forever stay fresh in my mind.

We crossed over the Charles bridge into Mala Strana, the lesser town, which is virtually on a hill and the road leads up to the Prague Castle. More of that later. The little town across the Charles Bridge leading up to the Prague Castle is an uphill climb with closely packed houses and restaurants, alleyways and nooks. There is a lesser town square at its heart (of course much plainer than its old town cousin). Best place to have a traditional pilsner or any of the home brewed beers and savor some traditional Czech food. The interesting doorways of the homes / buildings in Mala Strana also caught my eye – interesting gateways – cast in iron or chiseled from wood!!

After lunch in one of the roadside restaurants, the exploration continues into Kampa. This quaint neighborhood is again a popular tourist draw with its cafes and attractions. The highlight of Kampa, for me were the rows of trees in the middle of the cobblestone streets, the John Lennon Café and the John Lennon wall – a colorful graffiti wall with a history. The Devil’s stream meandering through Kampa, still has some defunct water mills by its bank.

By then evening had set in and we crossed over the river to the National Theatre, and then followed the road parallel to the river, and reached the Dancing House. This is one of the few attractions that define modern Prague. From a distance it looks like a dancing statue, it’s in fact a curving modern office block built by architect Frank Gehry, with top-floor restaurant offering city views. Photo ops done; it was time to head back to the hostel for the evening. We had walked 15kms in one day, and the legs were screaming for some relief.

If Day 2 tested our endurance, Day 3 was for endurance and patience testing combined. Post breakfast, it was time to explore the largest coherent castle complex in the world – the Prague Castle. Now the climb up to the castle from the base of Charles bridge is enough cardio to free you from any guilt of downing those beers. And then is the half day exploration within the castle – the old Royal Palace, the imposing St. Vitus Cathedral, St George’s Basilica, and then the streets within the castle grounds. Be sure to carry your hydration essentials within, and be ready for serpentine queues to enter into the premises, if you’re there in spring / summer (peak tourist season)

Looking out of the ramparts of the castle, a most unlikely structure stared at us. The Eiffel Tower. Now what would an Eiffel Tower be doing in Prague, possibly, and that too standing tall on the topmost point of the city. Intrigue is what drew our feet on a strenuous walk uphill from the castle, through the light woods of Petrin Hill to reach the base of the Petrin Tower – that closely resembles the Paris tower. This 200ft tower with a café at its base was originally a lookout tower, but is now a tourist attraction charging 350 CZK to reach the topmost viewing deck providing the most spectacular view of the whole city of Prague. With no further energy left to walk down, and ofcourse to experience my first Furnicular ride, we boarded one that would take us directly to the foot of the hill.

The last thing remaining on the definite to – dos was the Beer Garden with a view at Letna. If you’ve forgotten that story, by the time you’ve reached here after a long read, I’d ask you to rewind to the beginning of this story.

Thus, ended our 3-day trip to this city, that has left me yearning to spend more time here at an even slower pace.

1. While this is the age of Google maps, however the feel of reading a physical city map – is a great experience. Get hold of one at the railway station, or at the tourist information centres across the city.

2. 4 days is a good time period to explore Prague – the city will ensure that you have packed schedules for all the days.

3. Public transport – Metros and Trams are very well laid out in Prague. A metro map will surely come in handy to find your way.

4. Be ready to walk. In the three days I would have walked 50 kms cumulatively.

5. Don’t miss savoring the various pivos (Czech for beer) for which Prague is world famous– from the traditional pilsner to the various micro brewed ones.

6. How to keep the palate excited in Prague? – Prague has a huge variety of options to satiate your palate. If you like sausages and pork, then Prague is delight for you. And then there is the Instagram worthy Trdelnik.