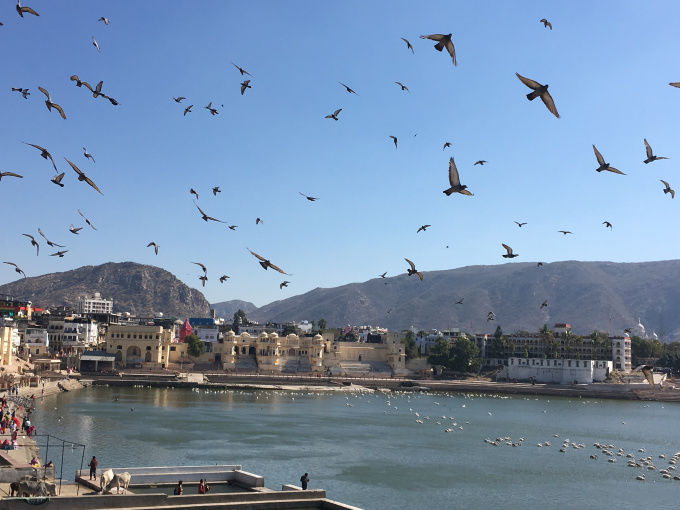 Thank God both my partner and I see what we see. I travel to make memories, rejuvenate and feed my inner soul!

Since we had to plan a quick trip for the weekend, most of the places in the ‘to cover’ list which were further away had to be crossed out. By the end, we were only left with Kishangarh (Pushkar and Ajmer). I have always wanted to experience the Pushkar fair. Since it happens every year around November, we were not too sure if we should plan a trip now in February. Nonetheless, we went ahead with our plans. And, we did not regret our decision!

Rajasthan, to me, is all about colours, vibrancy, music, forts, tales and the people! I have covered many parts of the region. Had done a family trip to Bikaner, Jaisalmer and Jodhpur back in 2012. Had traveled to Udaipur on New Year’s Eve in 2016. Have visited Jaipur multiple times. Been to Bharatpur Sanctuary too. Kishangarh was my seventh destination within Rajasthan.

Kishangarh is a city in the Ajmer district of Rajasthan. The city also known as Marble City of India, is famous for a special kind of painting called ‘Bani Thani’. There are many tales about this style of painting which originated from Kishangarh. While there are quite a few things to see in Kishangarh, like the Kishangarh Fort, Nepheline Syenite, National Geological Monument, Nine Planets Temple, we decided to head straight to our stay (which was closer to Pushkar/Ajmer and around one hour away from the airport) as soon as we landed in Kishangarh. Before the Kishangarh airport was built, people had to travel to Pushkar and Ajmer by road which was time-consuming. People either directly traveled to Pushkar or flew to Jaipur and then traveled more than 100 kms to reach Pushkar/Ajmer.

We stayed at a beautiful ‘Ananta Spa and Resort’, which was surrounded by hills and hence had a picturesque view in the backdrop. We were quite happy with the place. The rooms were spacious, comfy and clean.

The next morning we set off for Pushkar city which was just 4 kms away from our resort. Pushkar is in the central part of Rajasthan and on the western side of the Aravalli Mountains. The city is known for its annual fair, which is the largest camel, horse and cattle fair in India and maybe the world. Every year traders, tourists, pilgrims and locals flock to the city in the month of October/November. Supposedly the Pushkar fair alone attracts over 200,000 visitors every year.

Pushkar is also famous for its temples. The most significant one in the city is the Temple of Lord Brahma. It is one of the very few existing temples dedicated to the Hindu creator, Lord Brahma in India and remains the most prominent among them. The Brahma Temple has many mythological tales about its origin. We heard a few interesting ones from the locals.

Next, we visited the Savitri Mata temple. This temple is located at the top of the Ratnagiri Hill and is dedicated to Savitri, the wife of Lord Brahma. One would need to use either the cable car or the steps to reach the temple. You get a beautiful view of the city from the hill. There is an interesting mythological story behind its origin. It goes like - once, Lord Brahma was performing a yagna on the bank of the Pushkar Lake where the presence of his wife (Savitri) was required. But because she was late in arriving, Brahma married another girl (Gayatri) to complete this ritual on time. When Savitri arrived, she was upset to see someone else in her place and in her anger she cursed everyone present there. Later, she went to the Ratnagiri hills to atone for her deeds. The temple was hence constructed in her remembrance.

Next on our list was the beautiful Pushkar Lake, one of the most prominent spots of pilgrimage. The beauty of the lake is because of the ghats surrounding it. There is a total of 52 ghats around the lake. Out of the 52 ghats used by pilgrims to take a holy dip, 10 important ghats on the periphery of the lake, have supposedly been declared as 'Monuments of National Importance'. It was a beautiful experience to witness the serene, calm atmosphere at the lake, with devotees offering prayers, taking holy dips, birds silently making their way in the stunning blue and bright sky.

We then headed back to our resort and decided to relax for the rest of the day but only after we had our share of mouth-watering Rajasthani food. We were quite ambitious and thought we had the appetite to devour a whole Rajasthani thali. But we were wrong! The most common Rajasthani food are ‘Besan Gatte ki Sabji’, ‘Daal Bati Churma’, ‘Laal Maas’, ‘Rajasthani Kadhi’, ‘Ker Sangri’ and our thaali had it all and more!!!

On the last day, we checked out and headed to Ajmer, one of the oldest cities in Rajasthan. Ajmer is famously known for the ‘Ajmer Dargah’, the Mayo College and its lakes. We stopped at the Ana Sagar Lake which is spread over 13 kms and is the biggest in the city. The lake is surrounded by hills which makes it visually attractive.

On our way to the airport, we stopped over at the Nareli Jain Temple. It is a complex comprising of 14 temples built recently. It is known for its architecture and intricate stone carvings which gives it both a traditional yet contemporary look.

Though Pushkar and Ajmer are mostly destinations for pilgrims, I think it has something for all travelers. I am not a very religious person but what my grandmother once told me made a difference. I remember I used to make faces whenever she asked us to accompany her to the temples. But one day she told me that I need not visit the temples for any religious sentiment but may visit it for its tales, architecture, views etc. That definitely made sense to me!