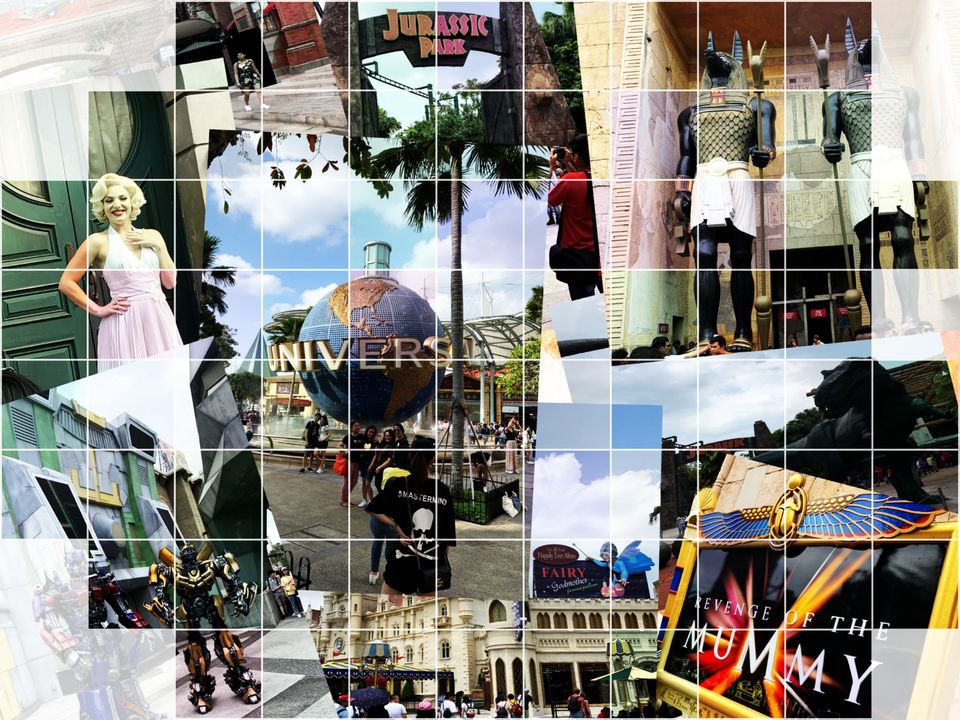 Ever heard of the expression "Sticking out like a sore thumb"? Ever experienced having a Corporate Meeting in the middle of Disney Land?.

Well me neither until I went to attend a conference in Singapore and of all the places it could be, it was being held in Resorts World Sentosa. Well, are you kidding?

For those who might not know, Resorts World Sentosa is the Go To Place of Singapore if you want to have fun. Its an island connected to the mainland of Singapore and is primarily developed as a Fun Place for tourists.

And imagine where everybody had fun on their mind and were dressed up in soooopr casual clothes, we were walking with downtrodden eyes to the conference rooms in our blazers and all. That's what sticking like a sore thumb feels like ;-). It was actually hilarious to see most of the people restraining themselves from running out of the conference and joining the merry making crowd outside.

But alas appearances needed to be kept and networking to be done, so we all slumbered till the day it was finally over and we could finally don our holiday clothes and have fun. And the first stop for me was the Universal Studios, Sentosa.

Universal Studios, Singapore is a Theme Park which is situated on the Sentosa Island, Singapore and is one of the major attractions of the Resorts World Sentosa. Easily spend a day here lost in the various themes, rides, shows and food and get to meet the stars via the various Meet&Greet throughout the day and have a Picture Perfect Fanboy moment.

In this blog, I am trying to capture my experience while also giving a basic sense of the Universal Studio along with some Pointers which might be helpful for a smoother experience.

If starting from the mainland Singapore, then take an MRT to Harbor Front MRT Station. Go to the top floor of the VivoCity Mall and from there take the Sentosa Express (Monorail) to the Sentosa World station which is the station for/in Resorts World Sentosa. Alight and the Park is situated at 100 meters.

Starting Point - Sentosa Island - Take the Monorail to Sentosa World Station or a BUS from any Bus Station around the Island which will drop you off to the Resorts World Sentosa.

Express - 40SGD extra (for a One Time Priority Entry to all the rides and shows).

Pointer - Universal Studio gets crowded on most of the days. So expect anywhere from 45 minutes to 90 minutes of waiting time especially for the popular rides. This means you wont be able to cover the entire activities in a day. Express Passes give you One time Priority Entry to all the rides and shows. So you save a lot of time and actually enjoy and relax. Who says Money cant Buy Happiness. Here it does ????

Pointer 2 - After entrance head towards left to the Customer Service Desk where you can buy the Express Tickets if you want and also grab a Map for Universal as well as another leaflet with all the timings of the various shows and Meet & Greets.

The whole park is designed in a circular formation or more accurately a Tennis Racket formation and divided into 7 different zones. Each Zone represents its own theme and have its own set of rides, shows and characters. The Zones are namely Hollywood(which is the Handle of the racket), and then moving in an anti clockwise direction, NewYork, SciFi City, Ancient Egypt, The Lost World, Far Far Away and Madagascar.

Pointer - Once you walk through the Hollywood Walk of Fame you arrive at a point from where you can move in a clockwise or anticlockwise formation covering the subsequent themes. Moving in an anticlockwise formation takes you to SciFi City, Ancient Egypt and The Lost World which are the most sought after Zones due to the best rides to offer and gets massively crowded as the day rides on.

Hollywood - Walk on Singapore's very own Walk of Fame with multiple restaurants and gift shops on either side as you continue to walk on the street embossed with Hollywood Greats. No rides here though.

New York - Themed after the New York City complete with a Yellow taxi. There is one show Lights, Camera, Actions hosted by Steven Spielberg. It shows how a studio recreates a Hurricane in New York City. Again no rides here.

Sci Fi City - The place with the BEST 3 rides in the entire park.

CYCLON is the best ride adrenaline wise. It literally makes you have faith in the Engineers who designed the thing or else you are toast ;-). However transformers due to its amazing VR effects is an experience to withhold and the most relishing experience.

Pointer - Both Cyclon and Human rides wont let you carry any loose items. Locker facility is available. The Locker can be hired for the Ride that you are taking since the Free Usage Time gets updated if the Waiting Time increases in that particular ride. You can either set the password as your Bio metric or your DOB.

Ancient Egypt - Transports you to the Mummy era (if ever there was one ???? ) with ancient Chimera statues and landscaped replicating Egypt. Wonderful.

The ride is called the Revenge of the Mummy which essentially is a roller coaster wrapped with some very interesting special effects specially the one where you are dropping down and its pitch black. Its cleverly done however a tad too short.

Another ride is the Treasure Hunter which is basically a ride through the sets but couldn't do it since this one was not a part of Universal Express and had a waiting time of 30 minutes.

The Lost World- Beware - Huge Dinosaurs protecting their Egg at the entrance. Approach at your own risk.

The first ride is the Jurassic Park Rapids Adventure which is a water ride and takes you through the sets of the Lost World. Its like walking right in the middle of a movie while the things are unfolding around you. Plenty of dinosaurs to spot.

Amber Rock Climb - Well this is another one which i enjoyed. Actually this being my first one, so it was a total different experience. Moreover, there was close to no waiting time here. The whole thing will take close to 2 minutes for an experienced person and 5-10 mins for a first timer. Difficulty Level - Easy

WaterWorld - Its a LIVE adventure water show..and one of the most enjoyable ones especially due to the Climax Effect. Thoroughly enjoyed it.

Pointer - If you are sitting in the first few rows be ready to get wet (moderate to full). However the Climax Effect is best enjoyable from the front rows.

Madagascar - As the name suggests, themed after the characters of Madagascar. Had a merry go round (basically for kids) and Madagascar: A Crate Adventure. This one was a boat ride which carries you through the jungles of Madagascar all the while in between of an unfolding story line.

That more or less sums it up for the rides part. There are plenty of Meet&Greet as well as Live Shows that keep on happening on a scheduled basis. You can either specifically be present at one or just breeze through and will be able to witness most of them. You can easily spend a day if you are into Universal Studio for the first time.

For me the best experiences were Transformers, Cyclon, Human, Revenge of the Mummy and the WaterWorld.

For other blogposts of mine - reach out to https://effermalworld.wordpress.com/ and leave your honest reviews.

SPONSORED
Want to book a similar trip?
I accept the Terms of Use and Privacy Policy of Tripoto.
SPONSORED
Related to this article
Places to Visit in Singapore,Weekend Getaways from Singapore,Places to Stay in Singapore,Things to Do in Singapore,Singapore Travel Guide,
Tagged:
#Singapore