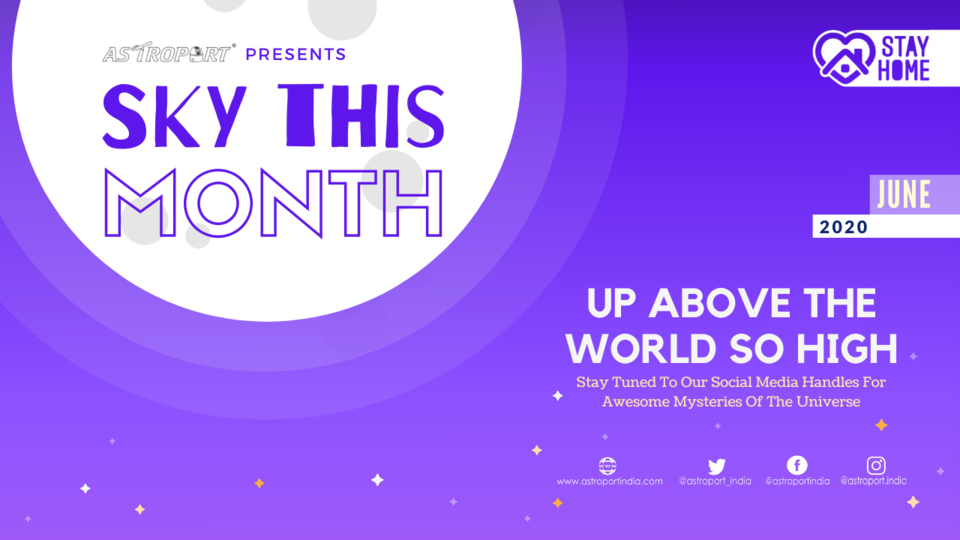 We know that the whole world is impacted by the pandemic and most of us are staying at home. We hope that you are keeping safe and staying at your home. While staying at home yearning for the wide open spaces the best thing that you can do is stargazing. June begins a series of excellent months of stargazing in 2020. Saturn, Jupiter, and, Mars reveal plenty of fascinating detail in a small telescope. Venus and Mercury will also make their appearances. We all love watching the . So, June will also bring in the evening sky. From Venus moving from the evening sky to the morning sky to the MilkyWay there's a lot of thing that the night sky will bring for us. Here's what's up in June's Sky 2020.

Ceres is well known Asteroid of the main asteroid belt that lies between the orbits of Mars and Jupiter.

June- 1: Conjunction of Mars and Ceres

On the very first day of the Month June the red planet will pass directly with the close encounter of the main belt Asteroid Ceres.

An Intermediate level of Dobsonian telescope can help you to catch these two solar system Jewels.

Other than these two there would be another great sighting of the Hercules Globular Cluster (M13/NGC 6205) will glitter the night sky in the midnight. Hercules Cluster is in the constellation of Hercules.

Perigee is the closest point along the moon orbit around the earth. When moon reaches at perigee it appears slightly bigger than usual.

On June 6 the Moon will be at its full phase you will also witness a rare celestial show, the 2nd lunar eclipse of the year 2020 "Penumbral Lunar Eclipse", which will start on June 5 at 11:17pm and the eclipse will end on June 6 at 2:35am.

Penumbral Lunar Eclipse occurs when moon enters into the penumbral shadow of the Earth as the Earth Moon and Sun are almost in a straight line.

Venus has emerged in the morning sky and today it makes a close approach to the slender crescent Moon in the northeastern pre-dawn sky. On this day moon and Venus will appear very close to each other in the sky making the conjunction with each other. A pair of binoculars will help us to get a better picture of these two bright object of the night sky.

June 21st will bring Summer solstice and annular solar Eclipse. Summer solstice occurs on 21st June when the sun positioned directly over the Tropic of cancer. This is the official start of summer in the northern Hemisphere.

The June solstice is the summer solstice in the Northern Hemisphere. A solstice happens when one of the Earth's poles has its maximum tilt towards the Sun. we can also say that the Sun's declination from the celestial equator is 23.44 degrees.

This is counted by astronomers to be the first day of summer.

The New Moon will also occur on June 21 and this time the three heavenly bodies the Sun, Moon and the Earth will lie almost in the straight line causing a rare celestial event the "Annular solar Eclipse".

We will see the ring of fire on June 21.

On June 22nd Moon and mercury will make their closest approach to each other which will result to their conjunction.

In astronomy a conjunction occurs when two celestial bodies appears very close to each other for an observer who is looking from the earth.

However, these celestial bodies do not actually very close to each other they are in fact millions of miles far from each other's but due to our perspective they looks so close .

Which will be active from June 23 to July 2, producing its peak rate of meteors on June 27. This meteor shower named after its origin constellation Bootes.

Over this period, there will be a chance of seeing June Bootid meteors whenever the shower's radiant point in the constellation Bootes.

June 28th will mark the best visibility of a famous Asteroid 7-IRIS. Opposition is a time when any object glow better in the night sky than the usual days.

An intermediate level of Telescope can give us a better glimpse of Asteroid 7-IRIS.

And that's it for the month of June. Give a thumbs up if you liked the video, subscribe to our channel if you loved the video. And press the bell icon if you want to get notified with our latest content.

Until next time Clear Skies!!!

SPONSORED
Want to book a similar trip?
I accept the Terms of Use and Privacy Policy of Tripoto.
SPONSORED
Tagged:
#solar eclipse#annular solar eclips#night sky#stargazing#lockdown#covid-19#astronomy#space#telescope#planets#moon#sun#surya grahan