Marseille Travel GuideMarseille TripsThe 7 Best Things To Do In Marseille

The 7 Best Things To Do in Marseille 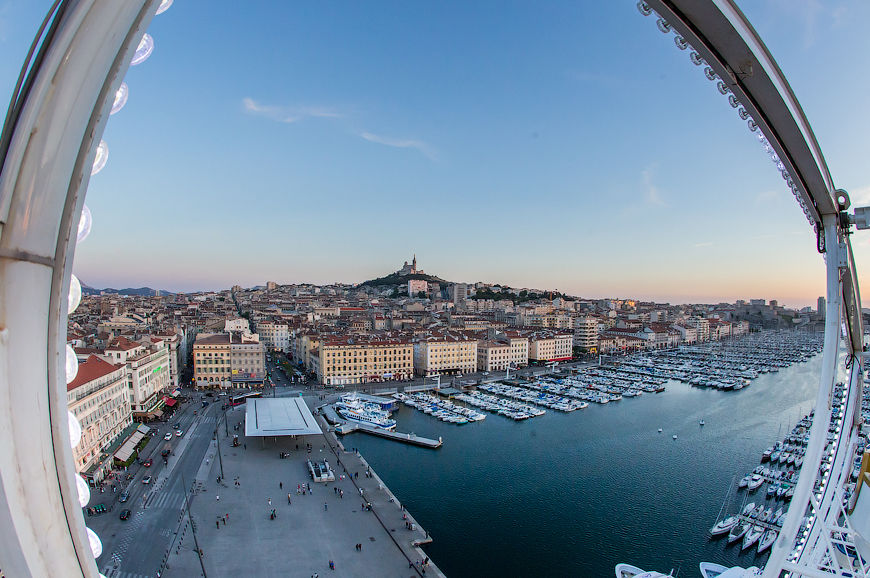 When people think of France, their mind immediately goes to Paris. And even when you specify the French Riviera, still the top most answers are Nice, Cannes and Toulon.
Not that these cities are not a work of art in themselves. But there is something about the raw appeal of Marseille that makes its beauty unparalleled and like no other!
To experience the essence of the city, ensure to do the following on your visit! 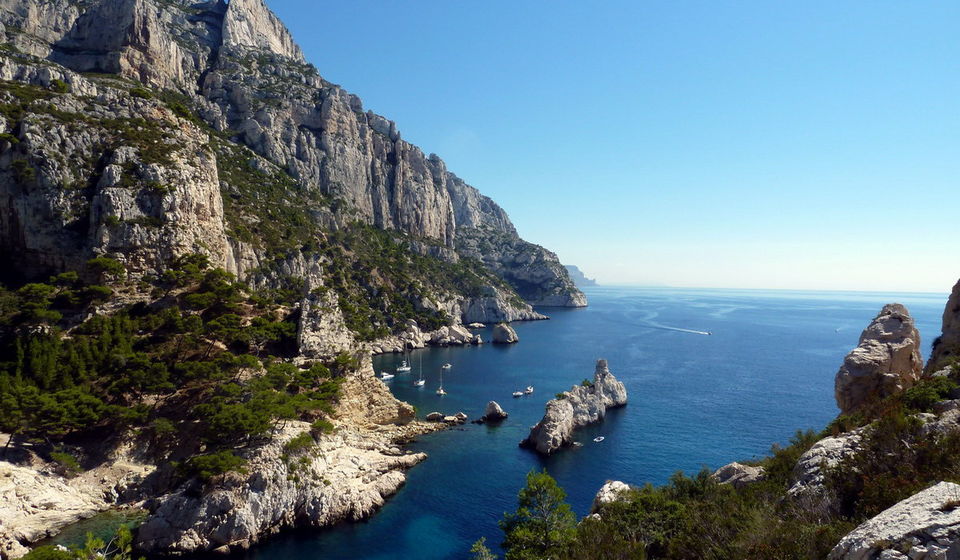 Luminy is the southern most part of Marseille, and trekking beyond the national park will take you to a string of calanques, the sight of which will make you feel like you have stumbled upon the hidden world of azure, where the sky finally meets the ocean.
The sight of the deep blue sea, after trekking through the dolomite terrains at the foothills of Mont Puget, is something words can never describe. It can only be felt! 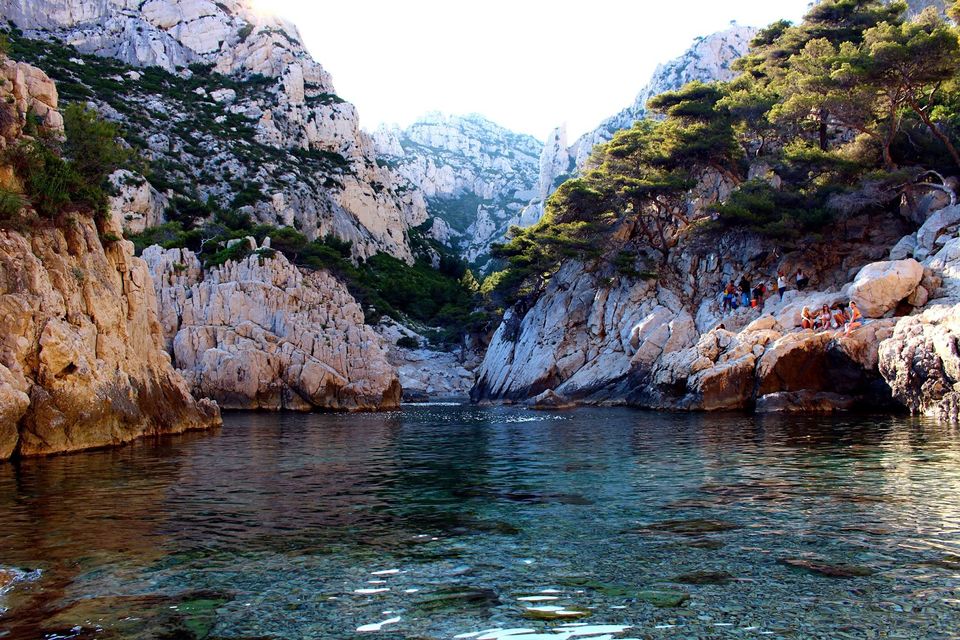 At certain locations, the calanque is very shallow. Such spots are frequented by the locals and tourists alike for taking a break after the trek. And believe me, once you have soaked your feet here, no other place can quite bring the same joy. 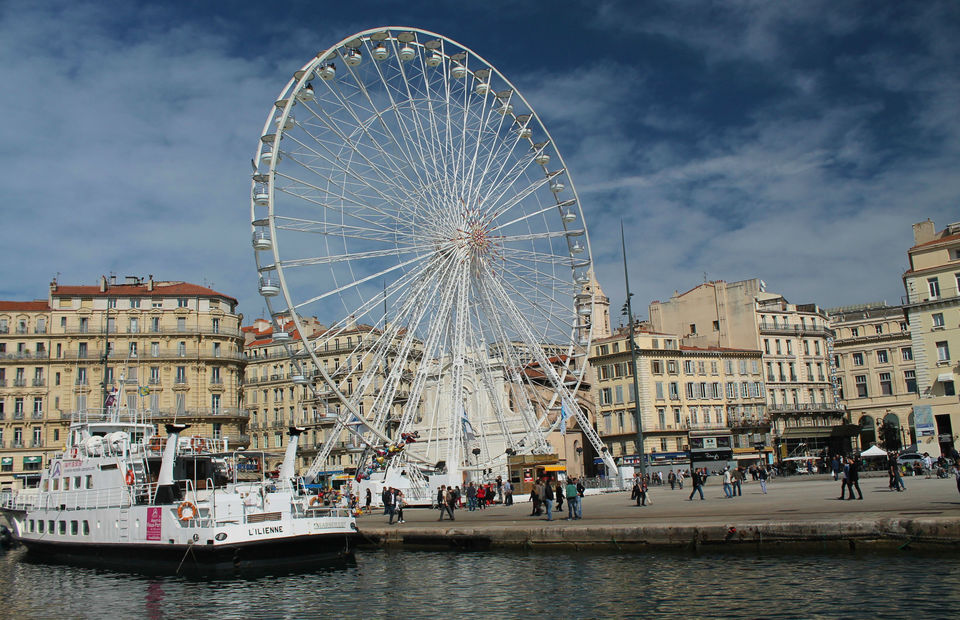 The old port of Marseille, more commonly referred to as Vieux Port, is one of the busiest hubs of the city. Apart from being the natural harbour, it boasts of having the most lively night life in the city. From the best pubs to the most expensive hotels, everything can be found here.
And for those addicted to shopping, the inner lanes of Vieux Port house the top notch brands and outlets, making it like an outdoor mall straight out of a shopaholic's fantasy!

3. Soak in the cultural richness of MuCEM 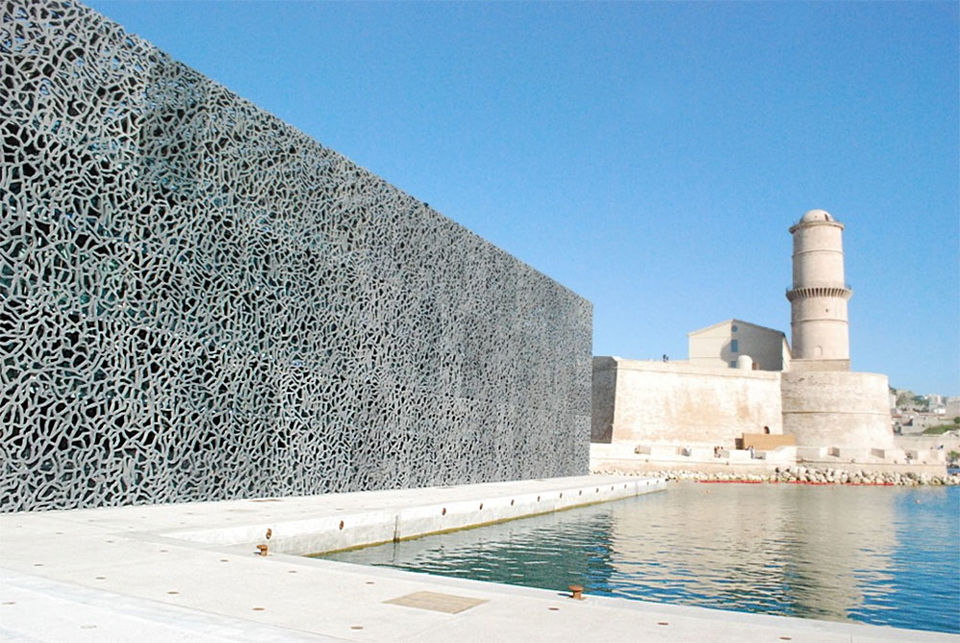 Musée des Civilisations de l'Europe et de la Méditerranée or The Museum of European and Mediterranean Civilisations (MuCEM) is the national museum inaugurated in June 2013 to celebrate Marseille becoming the European Capital of Culture for 2013. It has a spectacular location with the Fort Saint-Jean on one side, the Marseille Cathedral on another, and the Mediterranean sea everywhere else.
This sea-facing landmark holds exhibitions on Mediterranean history and civilizations. 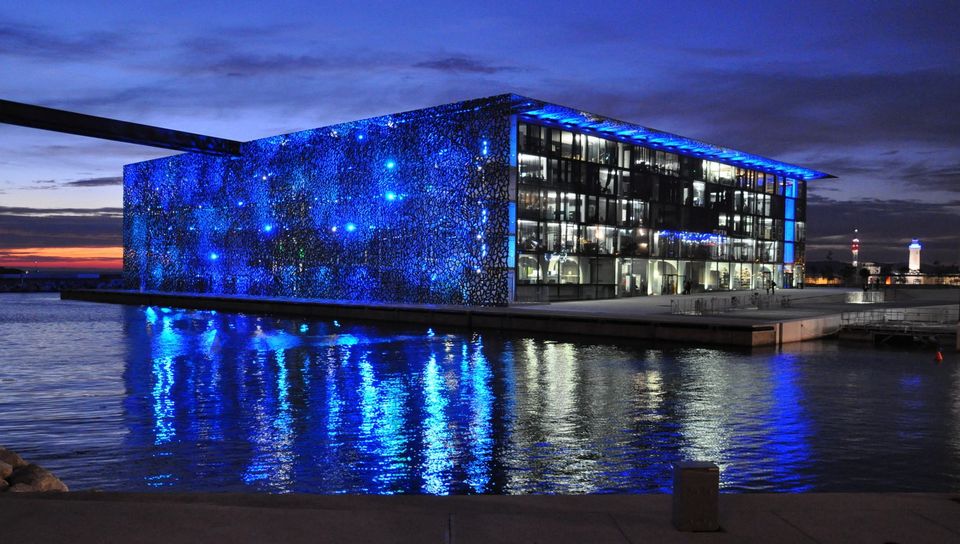 The intricate mesh-work is a sight to behold, and its scintillating beauty reaches another level all together during night fall, when the blue lights make it seem radiant like a starry sky. 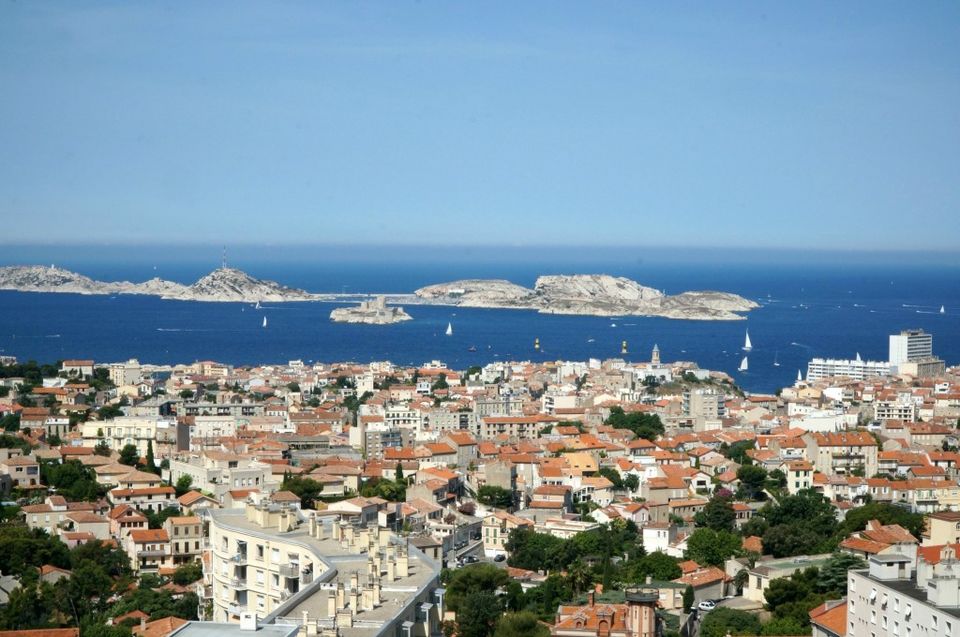 Every French city has a basilica referred to as Notre Dame, which means Our Lady, at the highest point of the city, having a statue of Mother Mary on the top, looking out for the well being and prosperity of the residents. And goes without saying, Our Lady has the best spot to view the entire city in all its might.
And when the city is surrounded by brilliant blue on one side and rocky dolomite mountains on the other, with crimson streets in between, the sight surely takes your breath away! 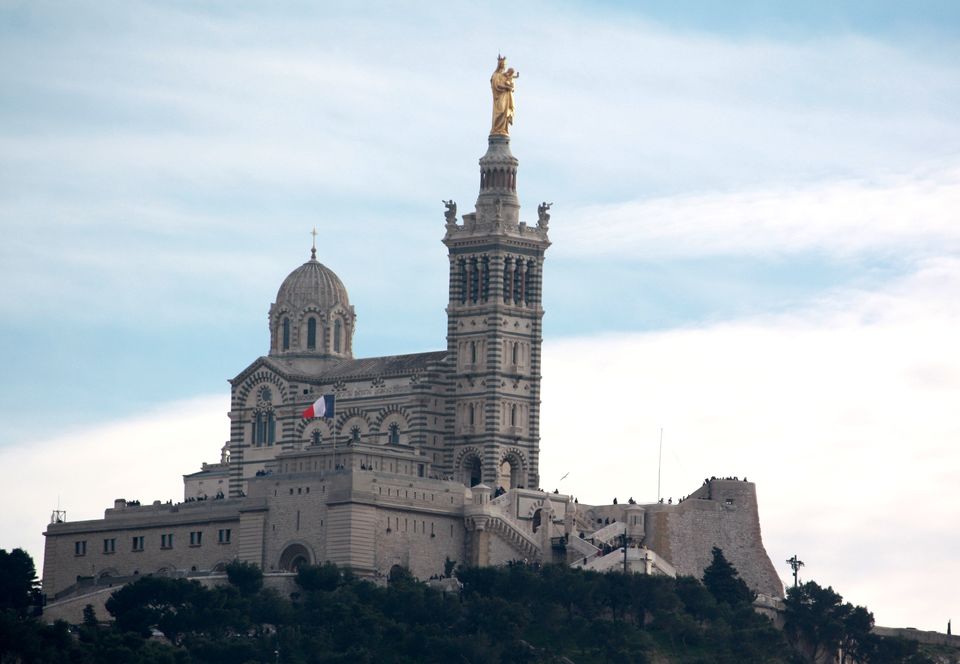 If you are able to look away from the view, you will enjoy the intricate details of the basilica itself. The lower church is of Roman style, carved from the rock, and the upper church is of Neo-Byzantine style, decorated with mosaics, giving the church a unique architecture. 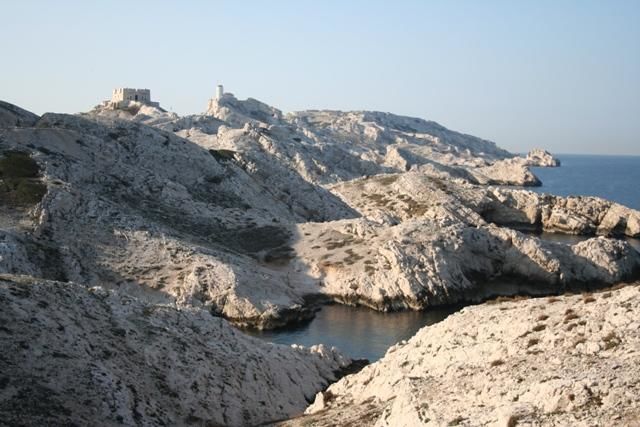 Îles du Frioul is a part of the Frioul archipelago. The island is easily accessible by taking a ferry from Vieux Port, and along its coastline, it houses many calanques. The beauty of Frioul is enhanced by by rocky structures and terrains all through the island, against the backdrop of a brilliant blue sea, making it a picturesque location. 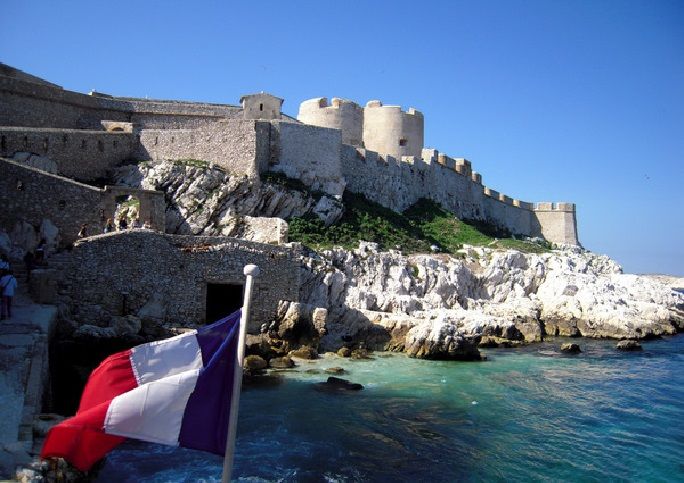 The Château d'If is a fortress located on the island of If. It was later turned into a prison, surrounded on all sides by the Mediterranean. The Château is most notable for housing the fictitious Count of Monte Cristo from Alexandre Dumas' novel of the same name, and so makes an ideal spot for catching up on some literary reading!

6. Walk in the streets of Castellane 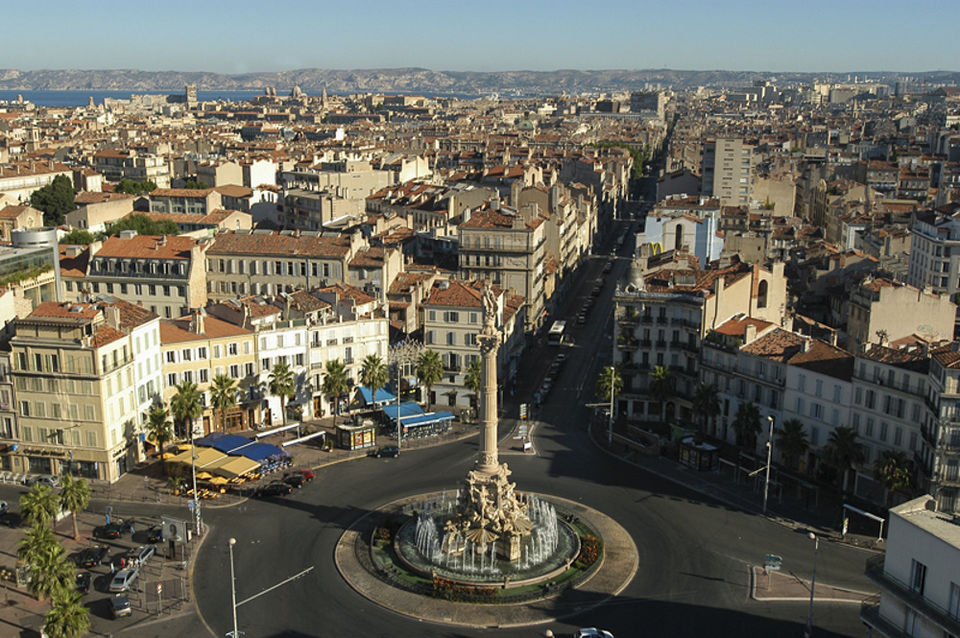 Castellane is the central part of Marseille. The cobble-stoned streets are brimming with cafés, bistros and patisseries. Though if you want a quick bite, there are also many local vendors selling delicious shwarmas and fries in the inner streets!
This is also the place where you can do a little budget shopping. And it also hosts an early morning flea market right on the streets!

7. Enjoy the sunset at Plages du Prado after a run alongside La Corniche 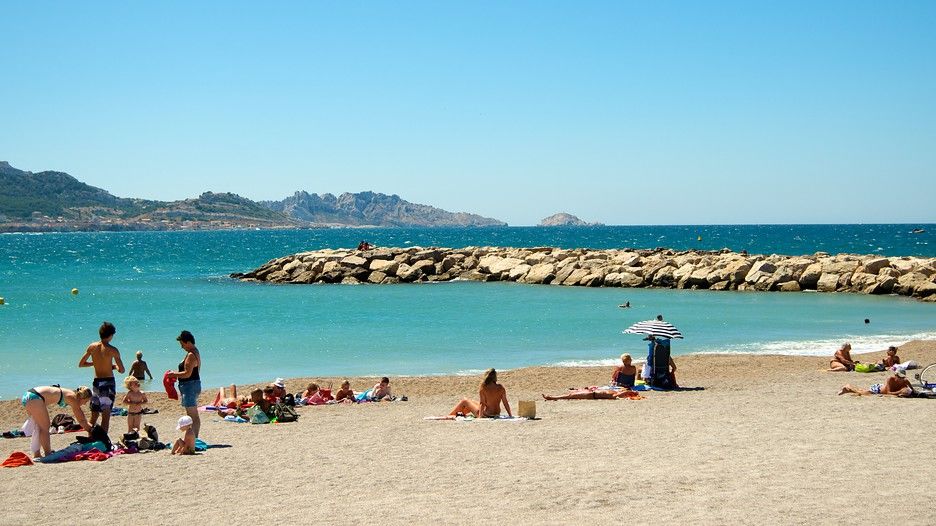 The beaches in the southern neighborhood of Marseille are referred by the generic name Plages du Prado. The entry towards the coast houses a huge replica of Michelangelo's David, and beyond the statue is the vast expanse of the Mediterranean.
The brilliant light blue is different from the deep blue of the calanques, and the spot is ideal for relaxing after a hard day. 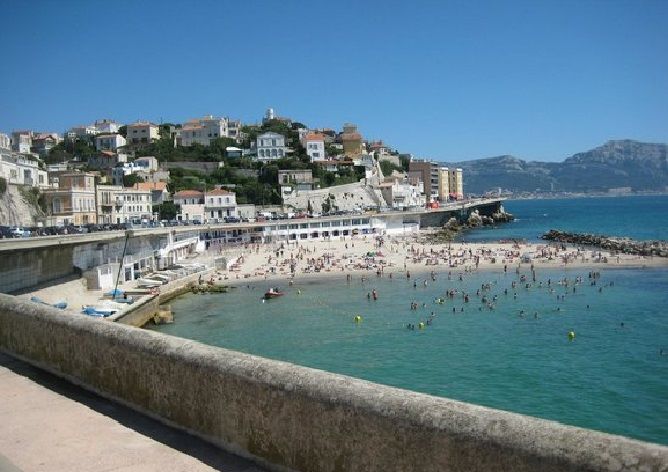 The entire coastline has a sidewalk for jogging and walking. A good run in the corniche, with the coastal waves beside you, make for an experience of a lifetime. No matter how tired the run might make you, but sitting on the shore of Prado beach, gazing upon the fading sun, you will feel blessed!