A break from the prosaic city life, my stay at Chimi Lhakhang village #VillageLife 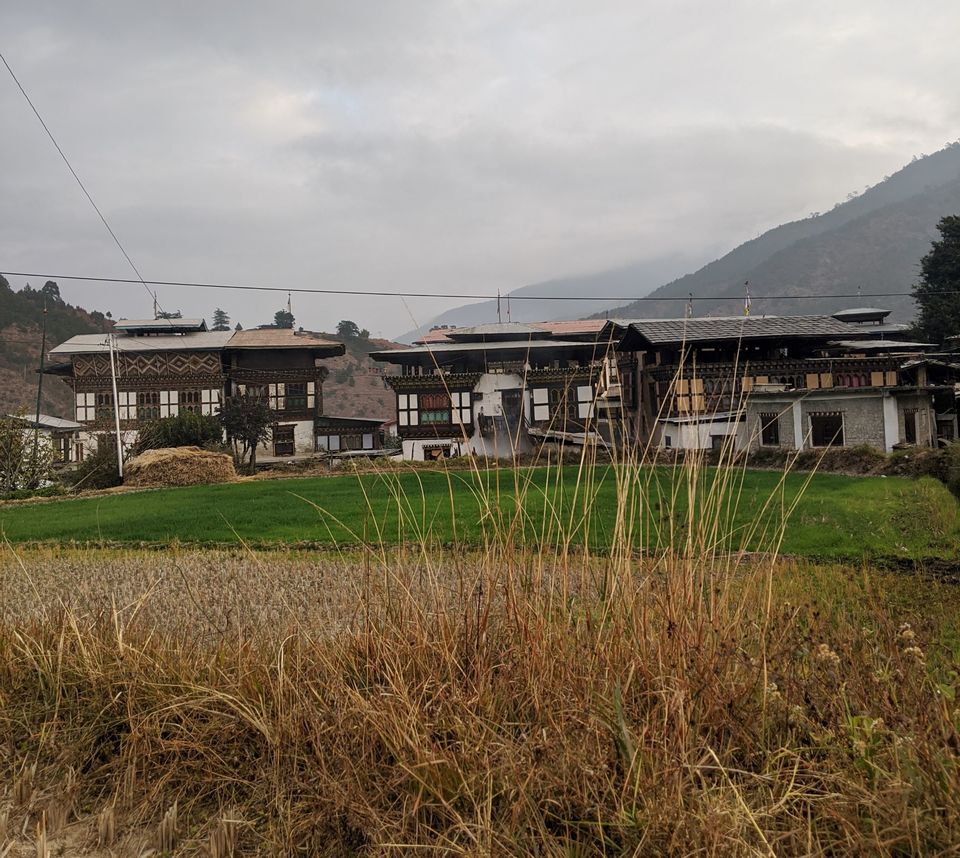 The place had just the right weather for stargazing but unfortunately, my friends had other things in mind and just wanted to rest. The dinner which Dago, our host had prepared was one of the best. All ingredients sourced were organic. One of the best feelings! 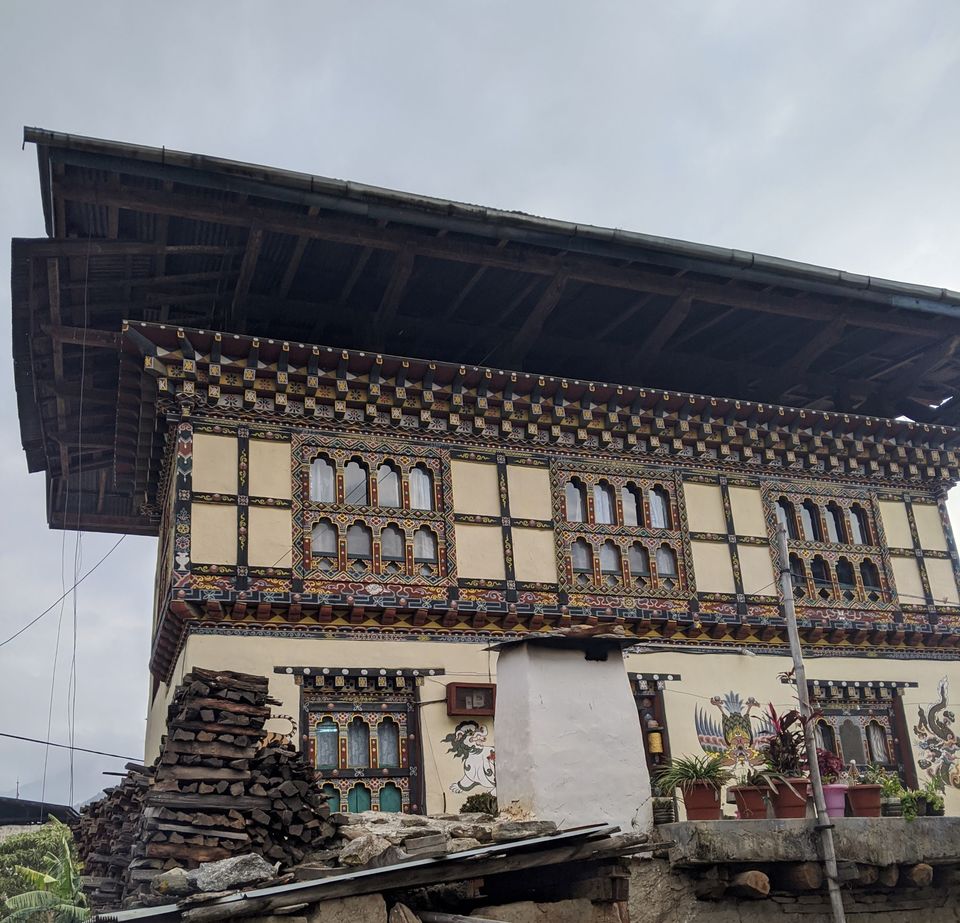 Staying at a village homestay in a village can be revealing. In the mundane city life I was leading, a stay in a Hinalayan village was all I needed. I feel blessed to have lived at Chimi Lhakhang Village Homestay in Chimi Lhakhang with our loving hosts. The moment I stepped inside my homestay, my eyes widened and my head was brimming with amusement as our host showed us around. A steep wooden ladder lead us to the first floor where our rooms were located. The beds were on the floor, we had one washroom to share among the six of us and it was the first day without a Wi-Fi connection! It was a fine example of a rural and traditional Bhutanese household.

Dago and her son 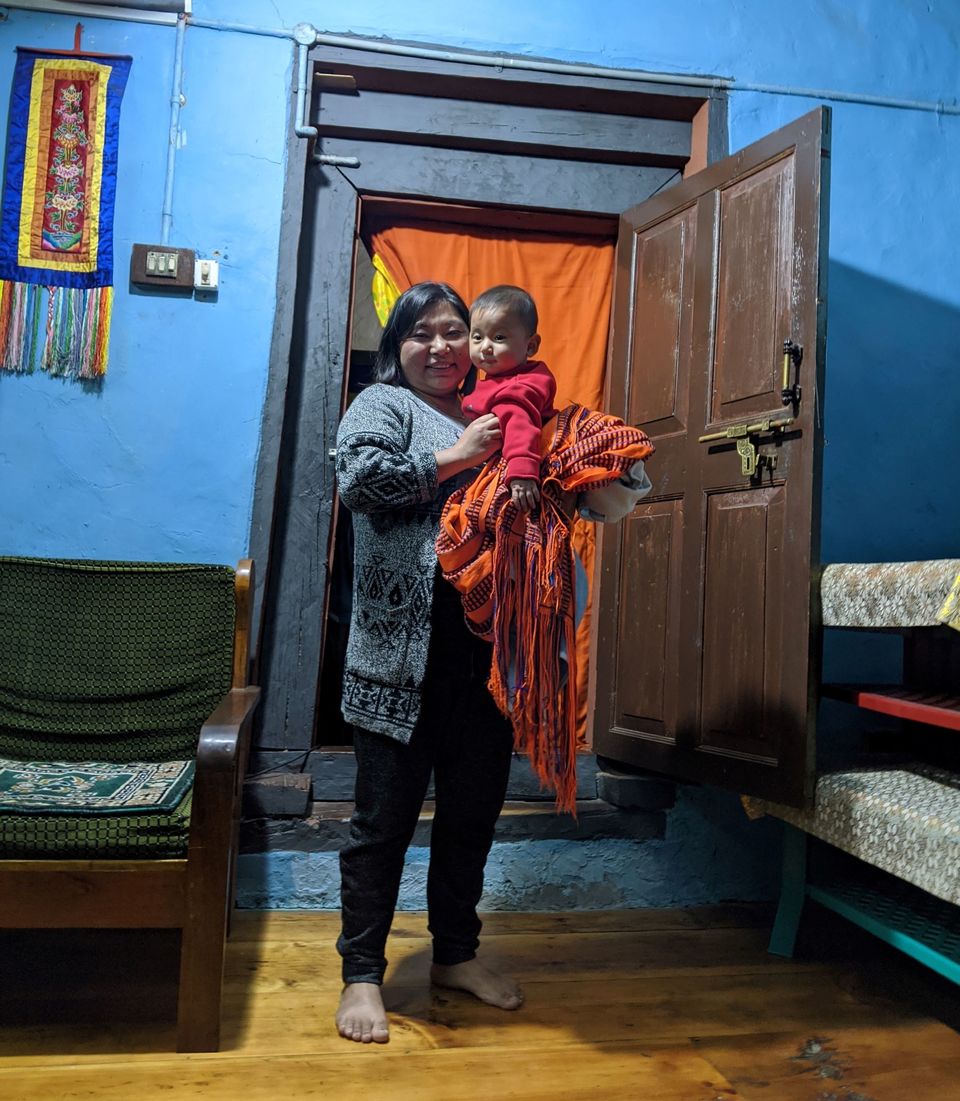 The next morning, I wanted to make sure that nothing got in the way of my trip so I woke up the earliest and booked the only washroom. Since none of my friends were ready to explore the village I decided to venture out alone.

An early morning stroll through the main street 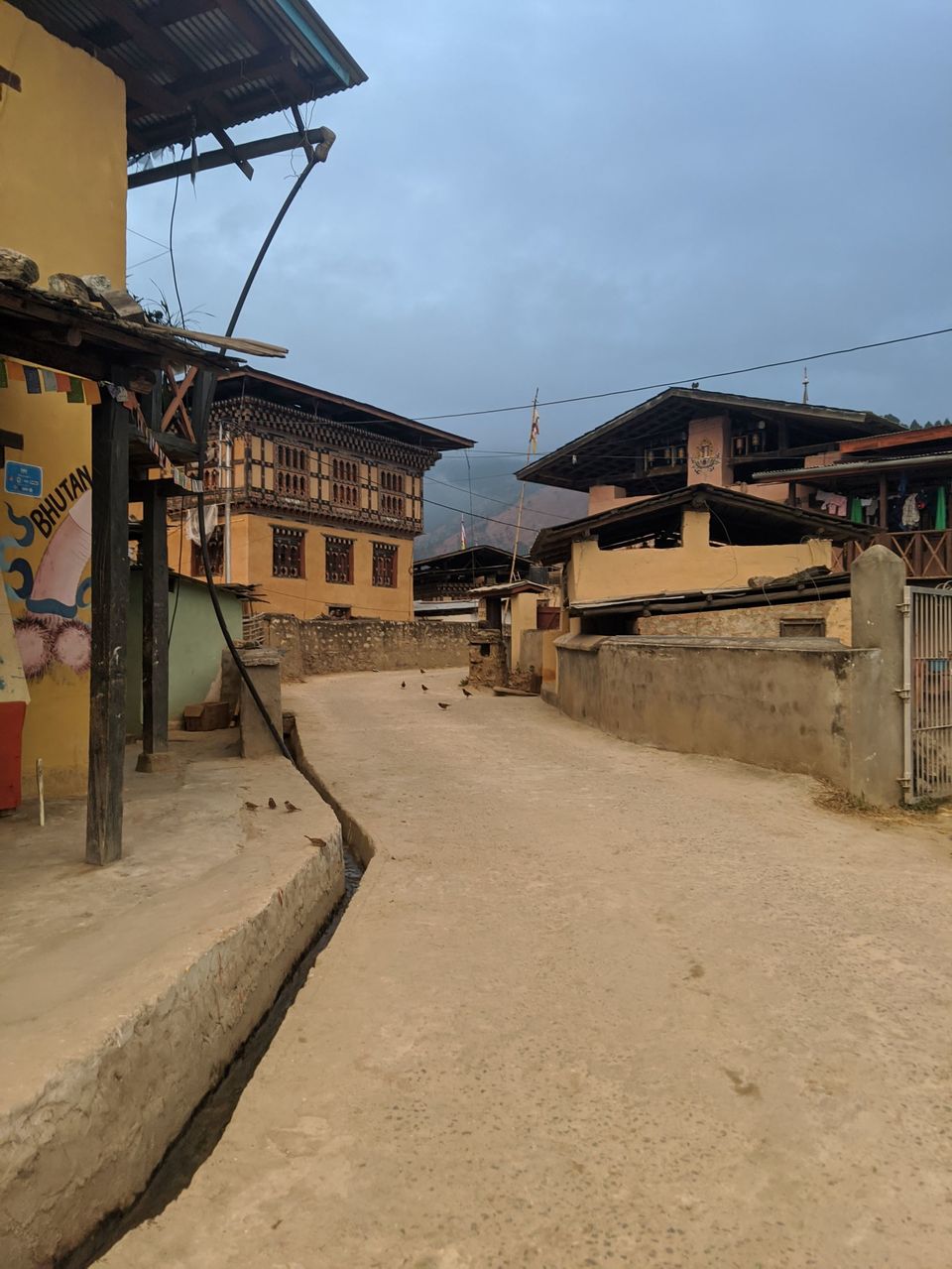 I saw the calmness of dawn on a village, the yellow paddy fields that resonated against the backdrop of the Himalayan ranges. I encountered birds of various species and families holding meetings in the middle of the streets. I witnessed families waking up to yet another day oblivious to an unknown tourist walking by with her camera. I gazed hard at the moments of animals and the gentle sway of the paddy. I saw shops open up to locals, art galleries opening up to tourists and the village wake up. As I walked through the buildings, I was partially shocked at the openness with which phalluses were painted in a very creative manner outside many houses. Well, it was Chimi Lhakhang which literally translated to fertility temple, the abode of the divine mad man. 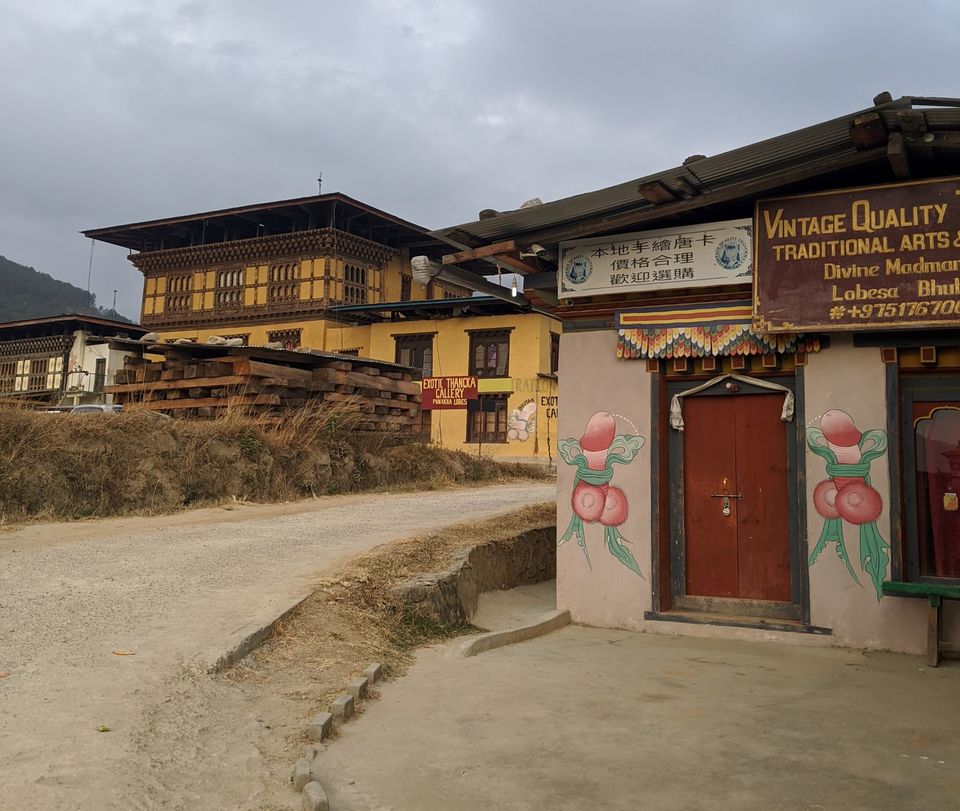 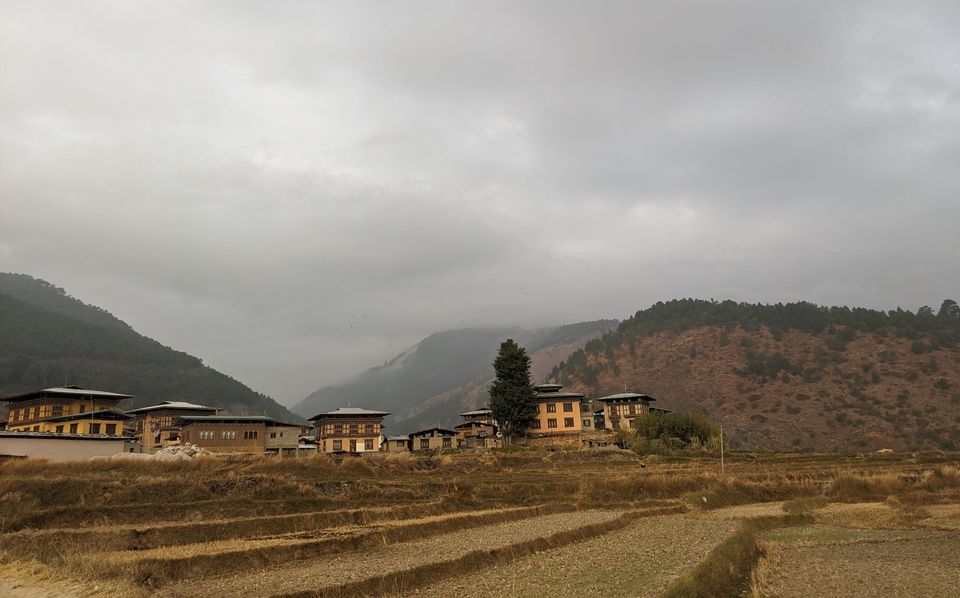 The lanes that connect families 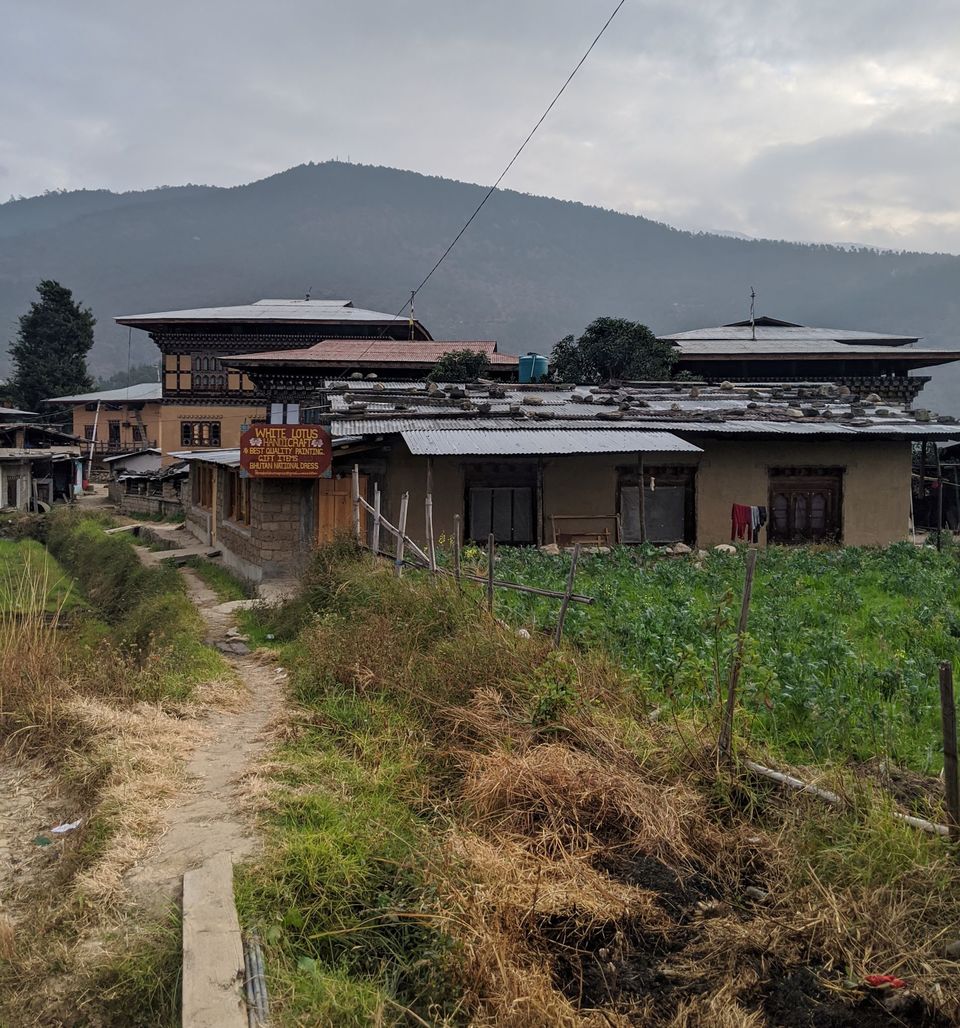 On my walk, at the entrance of the path to the temple, a dog started howling and barking at me. Initially I ignored it but it started chasing me and brought another dog with it which started investigating me. I realized that I had to abandon the video which I was shooting on my camera and started to console the dogs by speaking to them in Kannada, my mother tongue. Immediately their tails started wagging and I was a little underwhelmed as the transformation of the dogs seemed anti-climactic. A few seconds ago I was wondering the sensibility of taking a walk alone in a foreign country, carrying a phone with no sim card, deciding to go at a time when no one was on the streets to help me!

Walking through the tiny lanes connecting houses, farms and small shrines in the first rays of sun helped me see the happy, carefree families starting yet another day. Life there was simple, happy and uncomplicated. I could feel the strong bonding of a small community. There was unison among the people of the community and even the animals. I witnessed a helpful neighbour baby-sitting Dago’s son, families greeting each other as they started off their days and of course a young dog trying to ward off suspicious characters (me).

As I left the village, I realized the importance of simplicity, that happiness is something which is within a person and there is joy in giving. I didn’t fail to observe the importance of a strong community, a community which accepted guests and treated us like one of them. I did not miss Wi-Fi. I felt like I was tucked away in La La Land, far away from worldly problems or my life problems. It felt like when the world was at war, we just kept slow dancing in a trance. 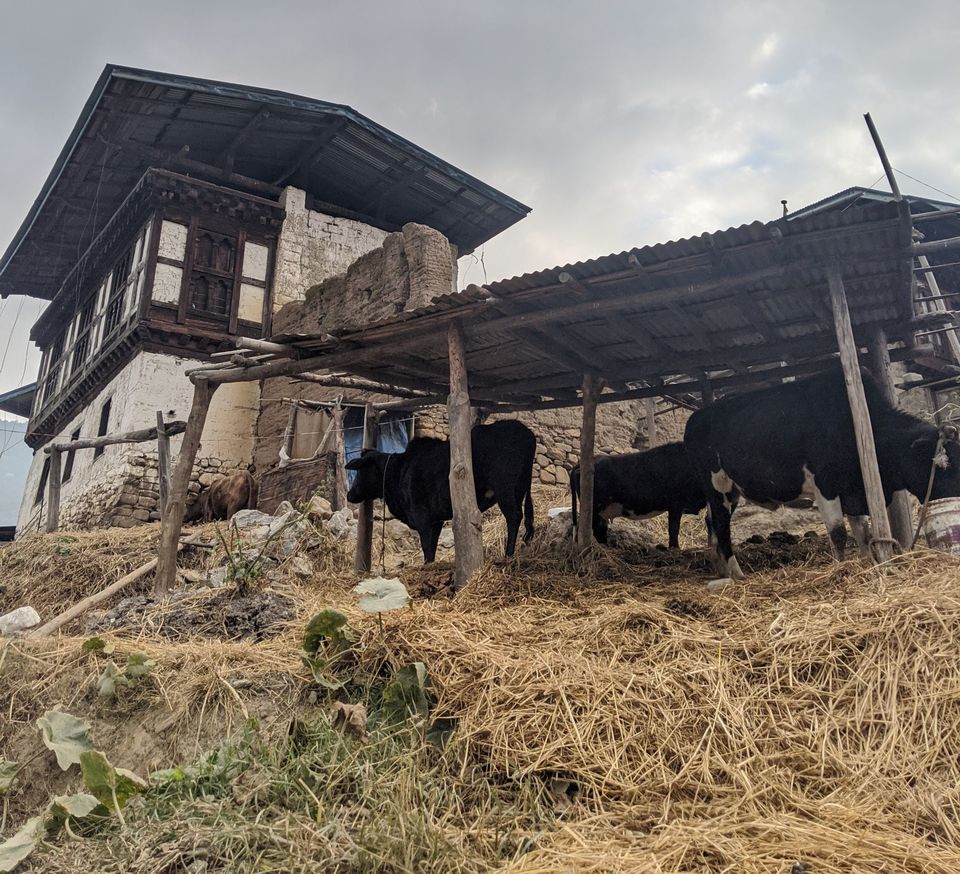 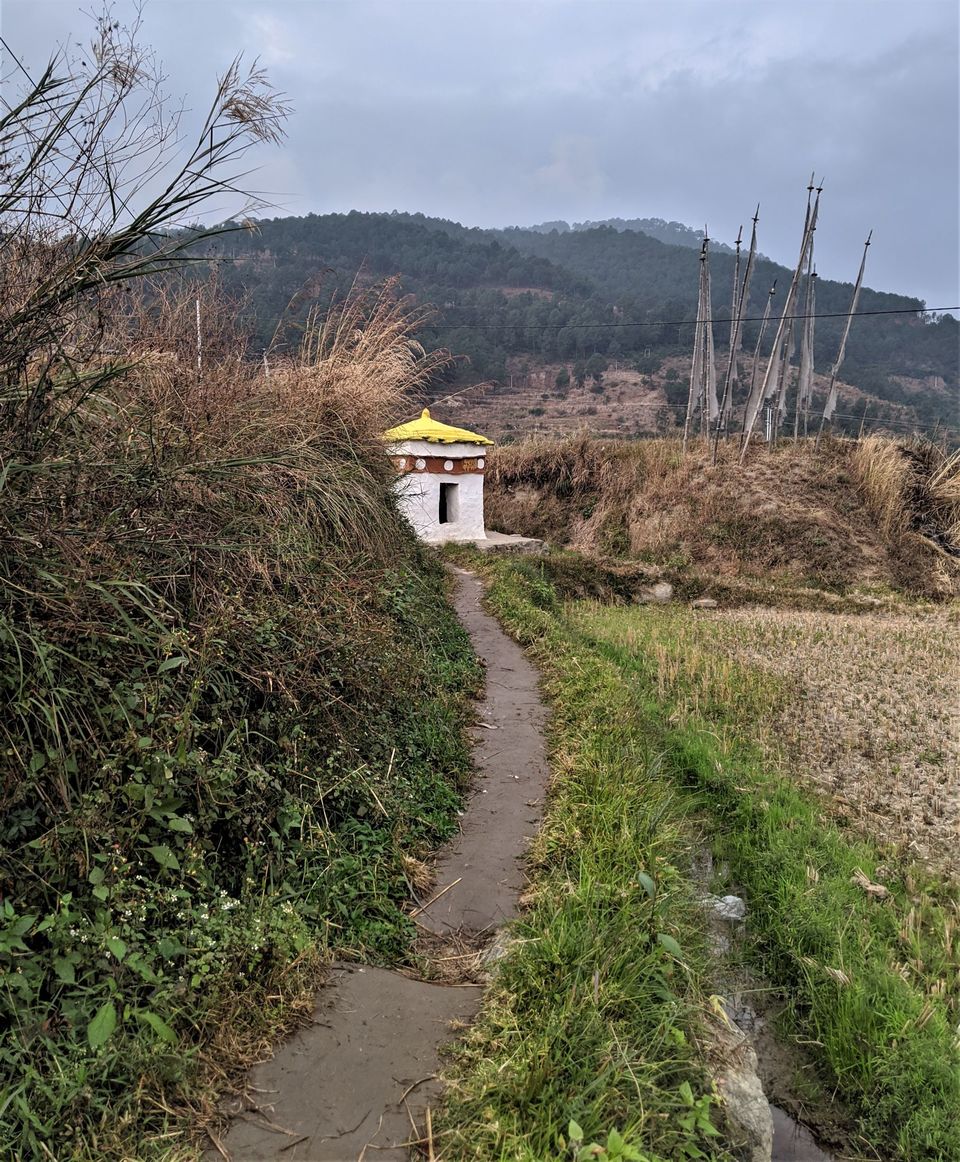