Early morning
Virupaksaha Temple view
Karnataka
Believed to functioning uninterruptedly ever since its inception in the 7th century AD, Virupaksha temple is the oldest and the principal temple in Hampi. This is easily one of the oldest functioning temple in India as well..
This temple is located on the south bank of the river Tungabadra, just next to where the local bus drops you.
This area in general has been an important pilgrimage centre for the worshipers of lord Shiva.
Virupaksha temple is equally sort after by the tourists and pilgrims. The annual festivals attract huge crowds of both the types.
The very origin of Hampis history as a sacred place revolves around the myths associated with this temple. It believed that this temple has been functioning uninterruptedly ever since its inception in the 7th century AD.That makes this one of the oldest functioning temples in India.

The original worship place was only a few separate humble shrines (believed to be as old as 7th century) housing the image of the god and the goddesses. Over the centuries the temple gradually expanded into a sprawling complex with many sub shrines, pillared halls, flag posts, lamp posts, towered gateways and even a large temple kitchen. You access the temples main entrance tower through the chariot street in front now popularly called the Hampi Bazaar.
This east facing giant tower Gopura leads you the first courtyard of the temple complex. This pastel painted 9 storied tower with a pair of cow horn like projections on top is the most prominent landmark in Hampi. The lower two tiers of the tower is made of decorated stone work.
.
.
.
.
.
.
.
.
.
.
.
.
.
.
.
.
.
.
.
.
.
. 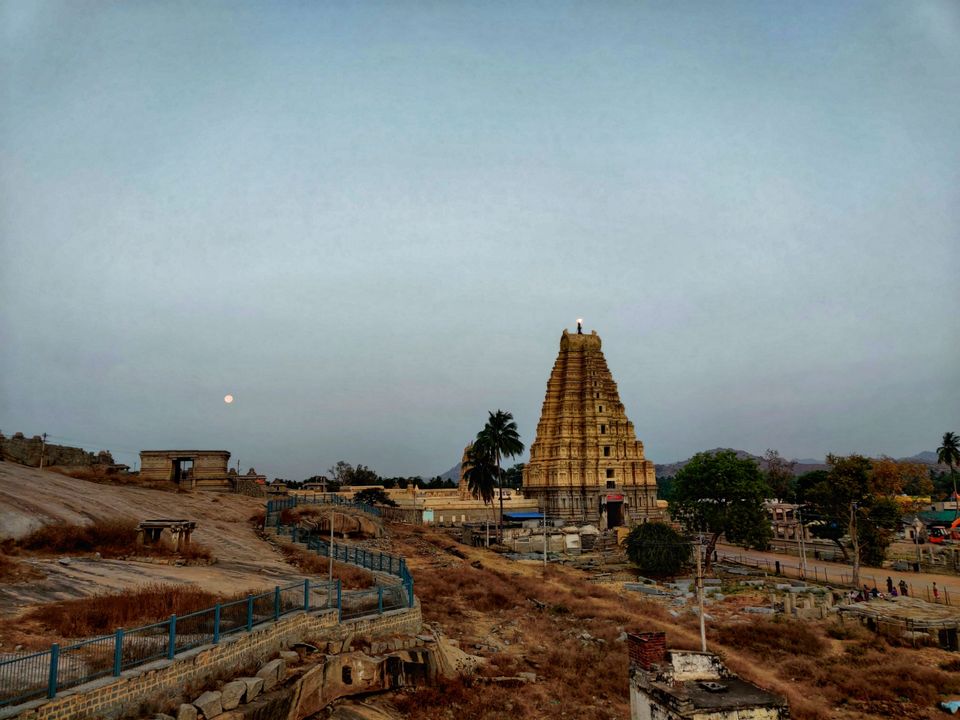